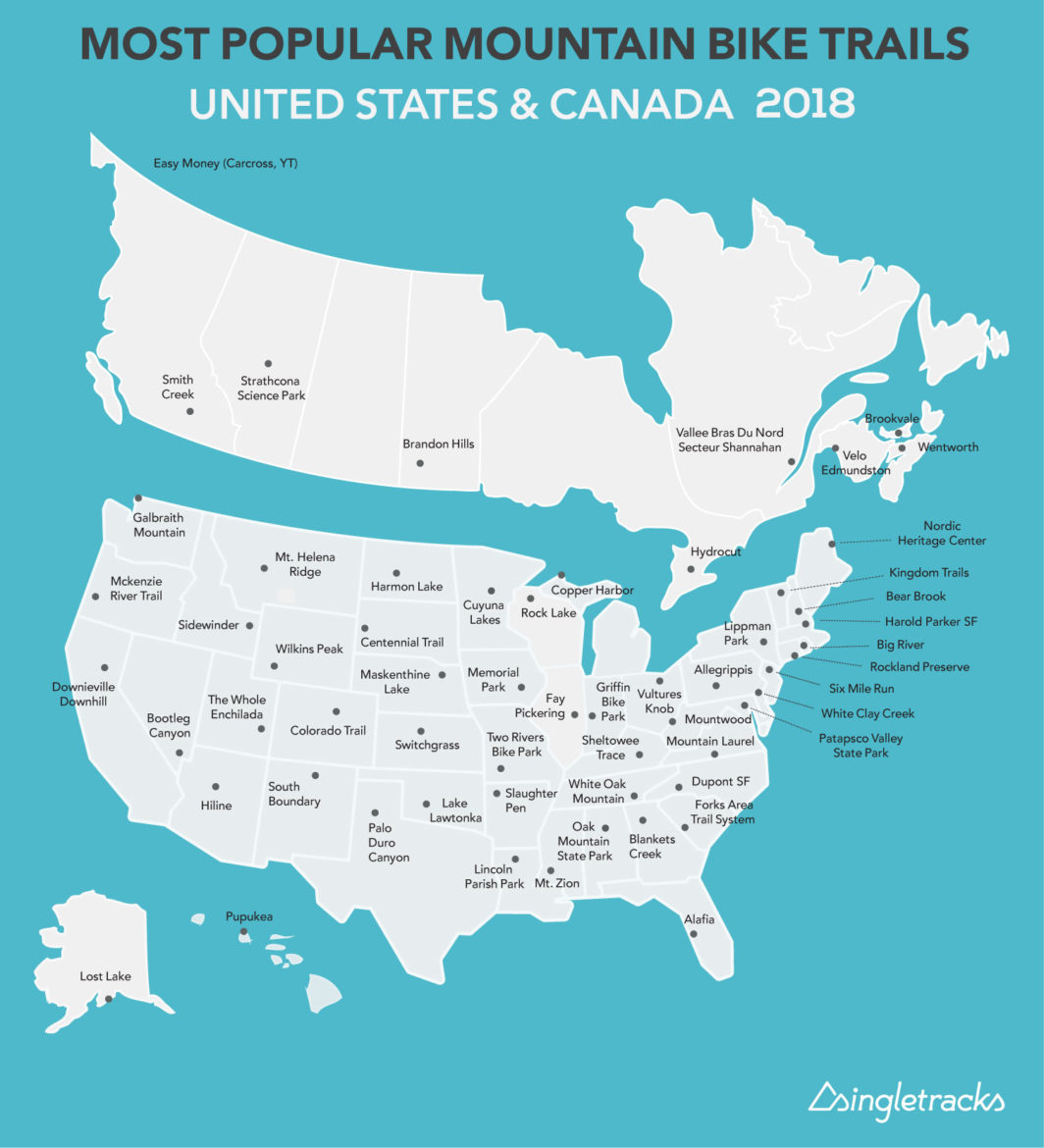 Note: check out the latest list of the best mountain bike trails in the USA and Canada.

Each year, Singletracks compiles a list of the most popular mountain bike trails in each US State and Canadian province to find out where our readers love to ride. We started sharing the list back in 2014, and it’s been really interesting to see how the top trails in each state change over time.

This year, we’re also highlighting “up-and-coming” mountain bike trails within select states, in addition to calling out any changes among the top 3 from 2017 to 2018. Read on to see what’s new around the US and Canada!

Oak Mountain is still holding strong in Alabama with Coldwater close on its heels. Alabama mountain bikers looking for something new should consider two up-and-coming trails according to Singletracks reviewers. Duck River near Cullman is a relatively new, 10-mile trail system, while Beaver Creek, like Coldwater Mountain, is part of the Forever Wild Land Trust.

Last year, Hangover in Sedona was the most popular trail in Arizona according to Singletracks readers. This year, it doesn’t even appear in the top 3 (though it does make an appearance at #4). Still, it’s easy enough for mountain bikers to combine Hiline and Hangover into a single ride.

Schultz Creek and Broken Arrow are new additions to the top 3 in Arizona, and we’re also seeing trails like Cloudview in Gold Canyon and Ranch Trail 62 in Prescott receiving renewed interest from riders.

An old favorite, China Camp, is trending with Singletracks trail reviewers this year, though the reason is unclear. Could it be due to the population explosion in the Bay Area? Is it because mountain bikers are getting older and looking for family-friendly places to take their kids?

The most popular mountain bike trails in Colorado are pretty well entrenched (and crowded). For those looking to avoid the crowds, check out these up-and-comers: Red Rock Canyon in Colorado Springs, Aspen Alley in Breckenridge, and the Little Scraggy trail in the Buffalo Creek trail system.

In Connecticut, Cowles and Pequonnock swapped places from 2017 to 2018.

By now, mountain bikers across the US are probably familiar with the Florida trails listed above, but there are even more great places to ride in the state. In 2018, the Mount Dora trail system located between Ocala and Orlando is trending among Singletracks readers.

Chicopee Woods and Bear Creek swapped places this year, though mountain bikers should note there are other trails that are trending as well: Bull / Jake Mountain, the Georgia International Horse Park (site of the 1996 Olympic mountain bike race), and Rope Mill.

Between 2017 and 2018, the Sidewinder trail jumped up from third place to first. The Corral Creek trail is a new addition, taking Loon Lake’s #2 spot from last year. Another trail to watch for 2018 is Williams Creek near Stanley.

The top trails in Illinois remain the same for 2018, though Illinois mountain bikers may want to pay attention to the trails in Horace B. Garman park in Decatur.

This may be a controversial result, but based on Singletracks reviewer ratings, Griffin Bike Park in Terre Haute is now the most popular place to mountain bike in Indiana, beating out regional favorite Brown County Park. We suspect even those involved in building and maintaining Griffin Park are just as surprised as anyone to see Griffin besting Brown County.

Based on a number of positive reviews in the past 12 months, Fort Harrison State Park outside Indianapolis is worth a look as well.

Badger Creek North moved up a spot, while Shawnee Mission Park moved down. Switchgrass certainly isn’t the only place worth riding in Kansas; check out trending traiils Wyandotte County Lake and  Coronado Heights.

Two other Kentucky trail systems to keep in mind — England Idlewild and Devou Park — continue to draw riders across the border from Cincinnati.

The Lakeshore and Monkey trails swapped places in 2018.

Up next: Maryland through Puerto Rico.

Gear
How Fat is Your Seat Tube?
Gear
Why are Good Rain Jackets so Expensive? We had to...
Gear
Our Favorite Mountain Bikes of 2022, And All the Rest...
Gear
This Gift for Mountain Bikers Will Knock Their Socks Off
Subscribe
Login
Please login to comment
4 Comments
Most Voted
Newest Oldest
Inline Feedbacks
View all comments

Oak Openings is quite cool in an ecological sense — some of the last existing prairie-oak habitat in the region. There is much better riding in southern Ohio though, especially around Athens, Chillicothe, east of Marietta and a couple of trails around Newark.

Agreed, it’s odd none of the Blue Ridge trails made the list. Keep in mind, however, that these are the most popular trails based on reader reviews, which does tend to skew toward more accessible trails.

What would you say are the standout VA Blue Ridge rides?

Noticed you included my review of Gray Mountain in Yukon Territory on my summer trip up that way. Also great riding at Mount Mac in Whitehorse and Montana Mountain in Carcross, about 100 km south of Whitehorse. Montana Mountain trails were built and are maintained by the First Nation youth in the area. (Ridden as well!) There is an IMBA Epic route there called ” Mountain Hero”. When I was there in July 2017 the top was still snowed in. I rode a trail below the peak and had a ball. Still had to push through some snow. I’ll try to upload a pic of 2.