Singletracks recently published its annual list of North America’s top trails as determined by you, our treasured Singletracks members. At the end of that infographic, Singletracks Publisher, Jeff Barber, threw out the challenge for someone to plot out the best possible route for the ultimate mountain bike road trip, hitting all those trails. This is just the sort of trip I would love to set up when I finally retire for good and have the time to take a few months to do such a thing. Well, I love a challenge, so here it is!

Anybody can connect the dots, but doing so in the most efficient way possible is a real challenge, especially as the number of stops increases. That’s where the use of route optimization software comes in handy. There are literally dozens of such software packages on the market, usually targeted to delivery businesses looking to eliminate waste on their routes. Functionality–and price–vary widely and give the consumer a confusing  array of options. But for Joe Moutnainbiker, things aren’t that tough. There are a number of free online programs. However, most free programs limit the user to anywhere from six to 26 stops. Now most of us aren’t going to hit up more than 26 rides on a trip, but for this ultimate trans-North American journey, we need more.

I found two free online programs which allowed up to 100 stops, but after hours of working with each, they simply refused to kick back an answer, always reaching some kind of error statement before the final verdict arrived. In the end, I bit the bullet and found a site with a one-day subscription available for a mere 5 Euro ($5.76 off my PayPal account).  Despite being a European product, the US map was, for the most part, up to the task. So with the help of RouteXL I was off and computing.

There were a number of limitations in entering, or even selecting, stops for the ultimate road trip. Hawaii was out of the question for obvious reasons.  While it is possible to drive to Alaska, it is so far out of the way, that it just wasn’t practical (sorry Lost Lake, I would have loved to have seen you).  Probably the best option would be to detour from Washington’s Galbraith Mountain stop into Seattle, and catch a cruse up to Alaska with the bike.

There were other limitations presented by the mapping software.  A few of the top trails have trailheads in remote areas which lie outside the map’s defined locations.  For these, an approximate location is the best I could  do. For shuttle rides, I used the endpoint as the location, assuming the rider would park there.

To keep the route generic, I simply linked all the rides into a continuous loop without regard to starting point, arbitrarily using Santos, FL as a the origin/terminus. Each road tripper can simply add the appropriate home location, which may or may not change the optimal route depending on where it is located. Alternatively, simply make haste to the loop and use it as is.

After manually entering the 56 locations (48 in the continental US plus 8 in Canada), the software did indeed kick out an optimal route.  I wouldn’t try to pull off 56 trails in 56 days, though. Some of the distances between trails, especially out west, are vast no matter how optimal the route. Some trails are also so epic, that a recovery day may be in order afterwards, even if there wasn’t a five-hour drive to the next ride.

On the other hand, there are multiple opportunities to hit multiple trials in a single day. Of course, weather can always disrupt the most perfect of plans. The rider will have to figure out for himself just how hard to push it.

Here is the optimal route for the standard North American trip described above along with an ordered list of stops: 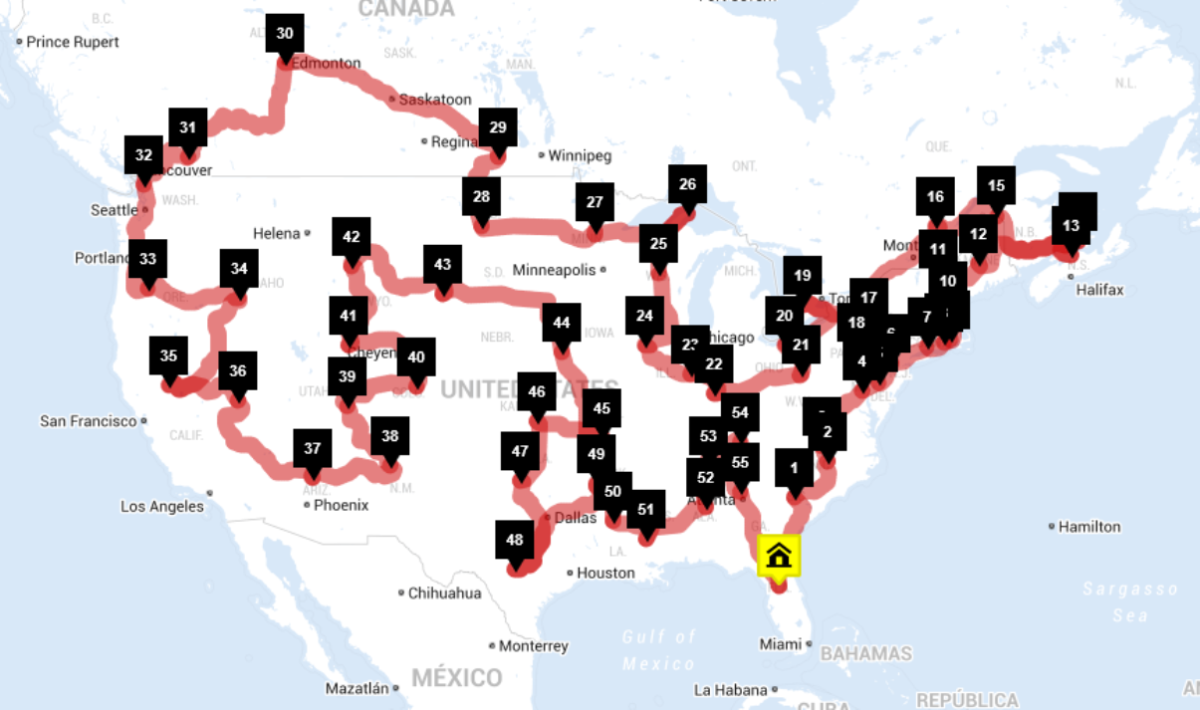 To execute the basic trip, not counting any detours for lodging, meals, gas, non-cycling activities, etc, you’ll log a whopping 362 hours of time behind the wheel covering almost 17,000 miles!  With a typical vehicle earning around 20mpg and assuming an average fuel cost of $2.25/gallon, that’ll come to just over $1,900 in gas. With that kind of mileage, there’ll be a few oil changes along the way as well.

Of course, the list can easily be tailored. For those worried about their passport, and wishing to save a few hours/miles/gallons, a US-only trip can be had for a mere 306 hours over 14,500 miles, requiring $1,631 in fuel.

No matter how much I would like to ride with the recommendations of the Singletracks database, there are a few reasons I must deviate. First and foremost, I have ridden many of the state/province #1s. If I’m going to undertake such a trip, I’m going to hit new-to-me trails at every stop. In a couple cases, I simply chose to discard the standard recommendation and stick with something on my bucket list or something the actual reviews make me believe I would like better. There were also two cases where no specific ride was chosen, so I’m adding some in. Here are the deviations I would make and why:

California:  Done Downieville, so it’s off to Soquel

Colorado:  Living in Colorado, I’ve done not only #1 and #2, but I really have to reach far down the list to get to one I haven’t done.  So I’m just throwing the list out altogether and hitting what is reputed to be the state’s meanest and most beautiful trail, Telluride’s Wasatch Trail (not to be confused with Utah’s magnificent Wasatch Crest).

Kansas: Like Arizona, numbers 1 and 2 are in the books, so it’s off to Camp Horizon.

Maryland: Done Patapsco, so it’s off to Vineyard.

Massachusetts:  This is one where I’m just going off script.  Many from Mass. have decried the Singletracks choice. People I know personally speak more highly of Lynn Woods, so that’s where I’m headed.

Michigan: Like Arizona and Kansas, numbers 1 and 2 are in the books, so it’s off to Potawatomi.

Minnesota:  Been to Cuyuna, so next in line is Lebanon Hills.

Montana:  I’ve spent almost as much time in Montana as Colorado so again, the list of trails already done is deep. Here, I’m heading for my ultimate bucket list ride, the 5,000 ft-of-vertical-climbing epic Curly Lake Highline.

Nevada: Like Arizona, Kansas and Michigan, numbers 1 and 2 are in the books, so it’s off to The Flume.

New Mexico: Numbers 1 and 2 are in the books, so it’s off to Angel Fire.

Oregon:  Once again, numbers 1 and 2 are complete, so it’s time to hit Sandy Ridge.

South Dakota:  Centennial was an awesome #1, but been there, done that, so it’s time for #2, the Prairie Trail at Custer State Park.

Virginia:  This is another deliberate run off script.  I’m sure Angler’s Ridge has some fine trails, but all the chatter I hear points to Douthat State Park or Carvin’s Cove.  I’m heading for Douthat.

Wyoming:  Having covered #1, it’s time to head to Grand Targhee.

District of Columbia:  Yes, there is dirt in the nation’s capital, and it’s not just on the candidates. I’m adding the Fort Circle Trail.

British Columbia:  Smith Creek looks like fun, but the province’s #2, Rossland’s Seven Summits, has been on my wish list a long time, and I’m sure it’s all I hope it will be.

Alberta:  Alberta has some of the continent’s most gorgeous mountains, so why head so far out of the way to a trail system in a city on the prairie?  I’m heading for Banff’s Lake Minnewanka instead.

Saskatchewan:  We have little info on Canada’s great prairies.  The Trail Canada route in Saskatchewan is just a greenway in the city of Regina, but even without a stop, it’s close to the optimal route, so I may as well make a stop.  I can even stop and visit the Royal Canadian Mounted Police Heritage Center while I’m there.

Of course, by the time I retire, I will probably have ridden a few more #1s and, if the last few years are any indication, many of the #1s will change anyway.  I’m keeping my data and will make changes as necessary.

Your Turn:  Have you any epic road trips planned or even dreamed?  If so, how do you scope them?