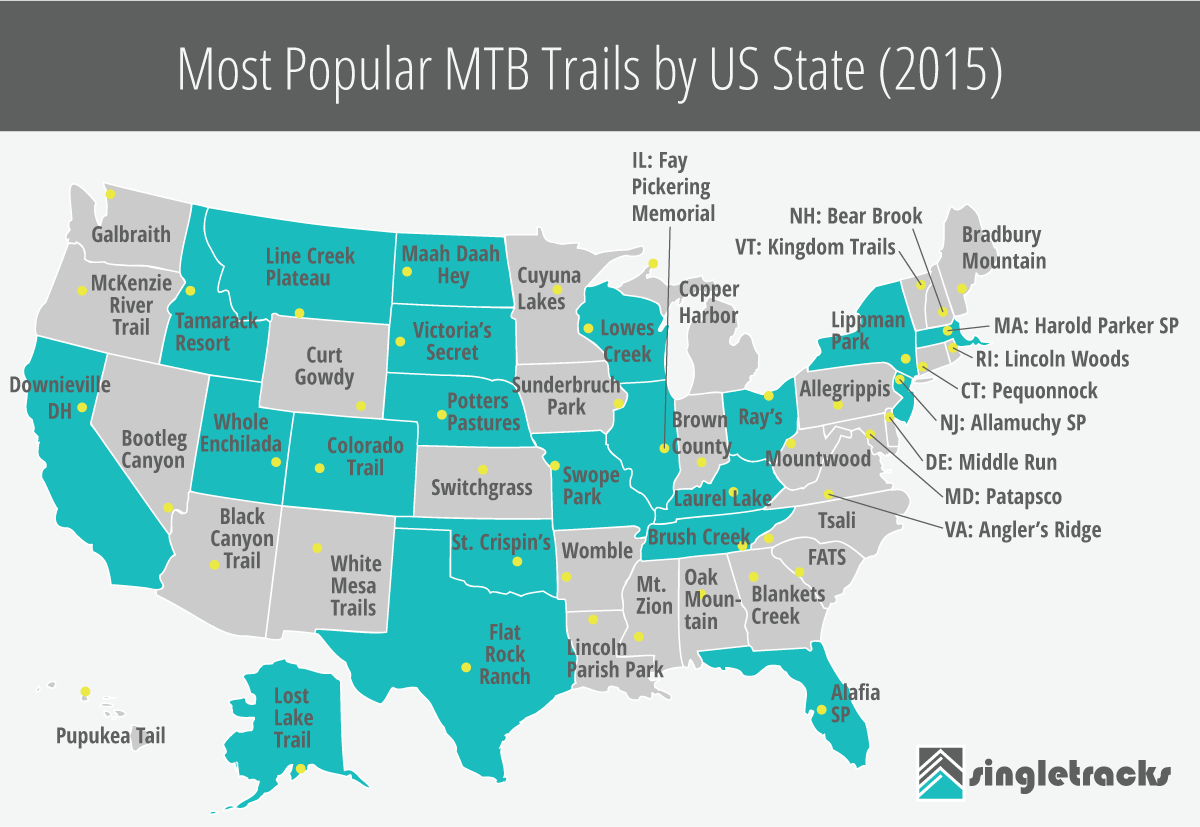 It’s here: the 2015 list of the most popular US mountain bike trails state-by-state! Last year we published a similar list, and since that time we’ve received nearly 10,000 new mountain bike trail ratings and reviews. As a result, 20 states have seen their most popular trail change from 2014 to 2015, as shown in blue on the map above.

Click the map above for an interactive version or check below to see the full list (last year’s most popular state trail is listed in parenthesis if there was a change.) We can’t wait to see which trails are still on top in 2016… and which new ones make the list!

Good list for sure and it shows you the “hardcore” mentality of MTB’ers who take the time to get online and write reviews or at least take the time to rate their experience. My first inclination was to question the Downieville and TWE ratings because my immediate response was “80-90% of riders won’t even attempt those rides”. However, I took the time to actually read the article and could see how readers of this site could reach those conclusions.

It’s interesting to contrast those picks with others like Tsali, FATS, and Blankets Creek in the southeast, none of which are particularly challenging but they are fun and for the most part, close to where people live.

The Downieville Downhill really isn’t all that gnarly. There’s one rocky section that can easily be rocked, and the rest is pretty flowy and smooth.

The Whole Enchilada, on the other hand, is decently challenging. But the hordes of people climbing on the shuttles every day seem to indicate that there’s a fair percentage that are willing to at least give it a shot

While it may not be gnarly, it’s still off the beaten path compared to most places and far away from the massive SoCal population base of MTB riders. As I’ve learned myself, most MTB riders do 98% of their riding locally for whatever reason….finances, can’t get time off from work to travel, aren’t willing to actually use their vacation time to MTB (crazy huh?) and on and on. For example, I have a core group of 7-8 friends I ride with and they all make decent $$ but not one of them has been to Downieville. Aside from getting them to make the 6 hour drive to Gooseberry Mesa, they rarely go more than 100 miles from home with the intention to ride.

While this is a “popular” list and not a “best of” list, it could be both depending on where you’re looking. Take WI and UT for example. For Lowes Creek to make the WI list is surprising. Not sure if it tied with Levis Mound, but I’m assuming it was close and they are two very different trails. LC is in-town (Eau Claire) and LM is about an hour from anywhere. Levis is better than Lowes. Why is Lowes popular and why does it get reviewed and rated? Because it’s close to people. Not many people are putting WI on their bike-cation list so Lowe’s will get the nod for its accessibility (it’s still a pretty cool little trail). In Utah, Enchilada is both popular and arguably the best but remote. Because lots of people go to that region to ride the best, Enchilada wins. Make sense? I just wish McKenzie River would drop already, but hey, I guess more OR riding for me without the attention.

Fay Pickering Memorial? In Illinois? I lived in IL and never once heard of that place.

From what we can tell it’s a new trail and it seems some of the local riders may have coordinated their five-star review barrage a week before we ran the numbers. It will be interesting to see where Fay Pickering stands on next year’s list once others get a chance to ride and review it.

The runner up in IL–Kickapoo–was also last year’s #1.

Nebraska: Speaking with others about their experience, I have no desire to make Potter’s Pastures a priority. I was, until I spoke with others. I’m actually confused as to how this is the most popular in Nebraska. Nothing you can do Jeff, as this is what you gathered from others. Just surprised that made it is all.

Louisiana: Lincoln Parish is over-rated. Much more challenging trails to the west to include Monkey and Bodcau. Locals will agree as well. Have I tried Lincoln? No, and this is based off many of the locals input, some I have ridden with quite a bit too. Even watching the vids of Lincoln, I wouldn’t make the trip. Then again, when I speak with people and they ask about the Singletracks.com sticker on my truck, they either don’t visit the site and/or haven’t heard of it. So, it’s all who goes on and rates. I’m just stumped on these two lol.

On a good note, articles like this are extremely helpful as was Greg’s post on the top 10 best trails in proximity to major cities. Thanks much Jeff and take care! Love things like this!

Well, the good news is the Monkey Trail is #2 in Louisiana so we’re not too far off!

Which trail(s) would you recommend in Nebraska?

Jeff,
I was somewhat impressed with Chadron State Park. There are some big hills and alternating prairie meadows and ponderosa forest. It’s very un-Nebraska like. The only drawback is that the trail is often sandy/gravelly.

Well, to be fair Jewell Park and Platte River are the two toughest with the most features. Jewell Park runs just under 3.5 miles, but it’s one that’s up, down, and around a steep hills, that if you don’t keep your momentum and are strong, it will outright beat you up. Platte River is similar to Jewell, however not an intense due to it running about 7 miles, and I believe that you can add more to that. So I’ve heard. There is also Tranquility running at 10 miles and Swanson running right at 5 (still changes being made to Swanson). The thing with Nebraska, is that most of the trails are out to the east. I still have to make my way out to Ponca Hills.

John Fisch; I need to get with you about Chadron, because it’s been my hearts desire to get out there and really see what that place is about. Let alone to get some content up on this site for others to check out. If the trails at Chadron run true to the terrain, then I might love it!

Still enjoy this article and thanks for the work and time.

Crazy stuff. My sister, a professor at Louisiana Tech has lived right there in Ruston (Lincoln Parish) for 30+ years. In all my visits there, I’ve never seen anybody on a mountain bike but then again, it’s been a while since I’ve been in Ruston itself.

Your listed trails in this article are the more frequented trails which takes away the experience of the other pristine trails that are in the areas which are less traveled and for me is my preference.

Thanks to everyone that helped make Angler’s Ridge the # 1 trail in Virginia.Thanks most to all the trail crew that keep it one of best maintained trails in the USA.Thanks to those that ride the trails and help spread the word about Angler’s Ridge 35 miles of singletrack.And thanks to you all at SIngletracks.com that keep us informed about Mt. Biking.