Out of the 331 trails that we have listed for Arizona here on Singletracks, the Hiline Trail in Sedona is ranked second most popular. The Broken Arrow trail system that we rode on day two ranks in at #3, and the Black Canyon Trail, #1, isn’t far away, either. Needless to say, I was extremely excited to finally get to experience Hiline for myself! (Know of any Arizona trails we don’t have listed? Add them here!) 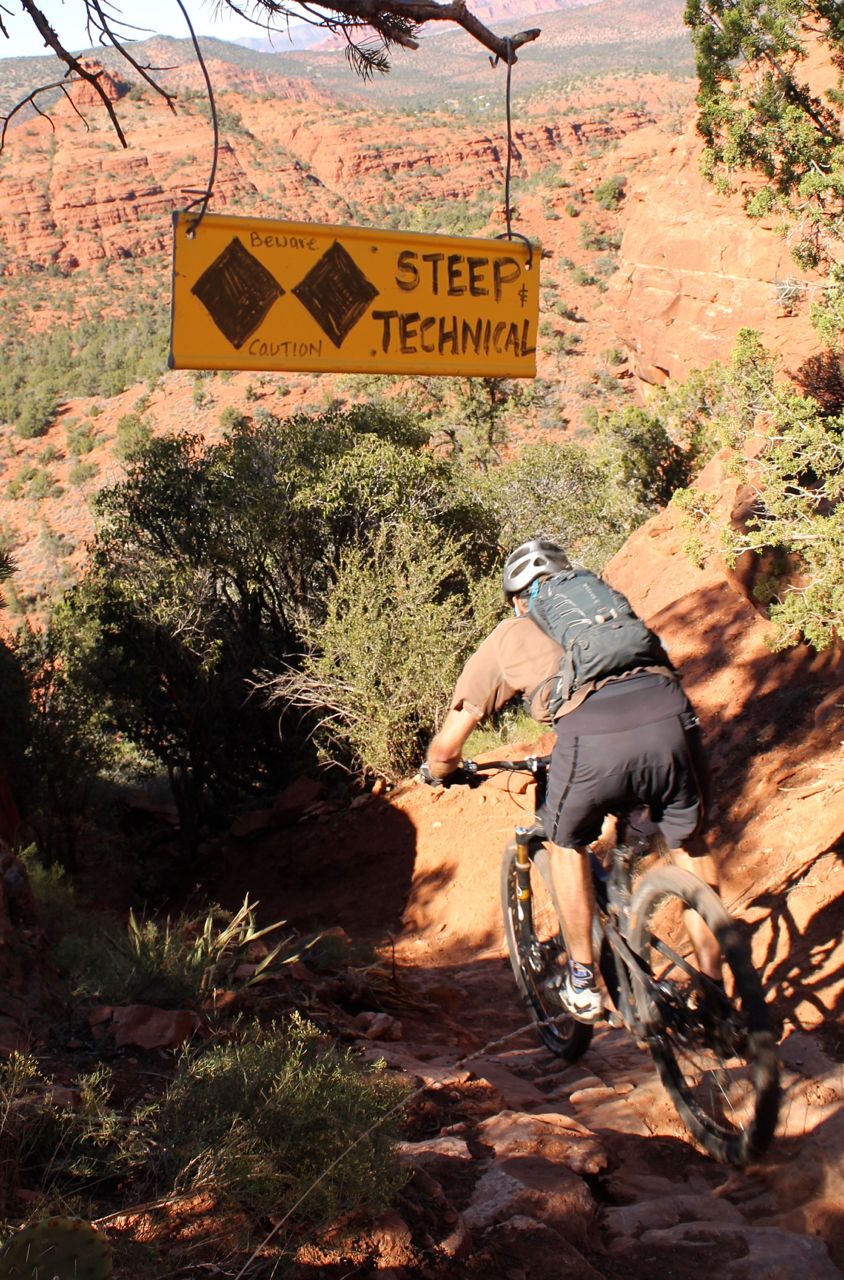 Red Rock Crossing refers to and old ford across Oak Creek. Now closed to motorized traffic, it’s still easily rideable on a mountain bike by hopping from rock to rock. After all of the dry desert riding high above the valley floor, rolling along a singletrack trail in the creek bottom with long grasses slapping our legs and the shade of the oaks offered a welcome respite from the harsh sunlight and was an astonishing change of pace. While there aren’t very many trails located directly on the shores of the river, the few that are located in this area are truly unique compared to the other slices of singletrack in the Sedona area. But as we began climbing out of the creek bottom, we were back into classic red rock country in a matter of seconds. 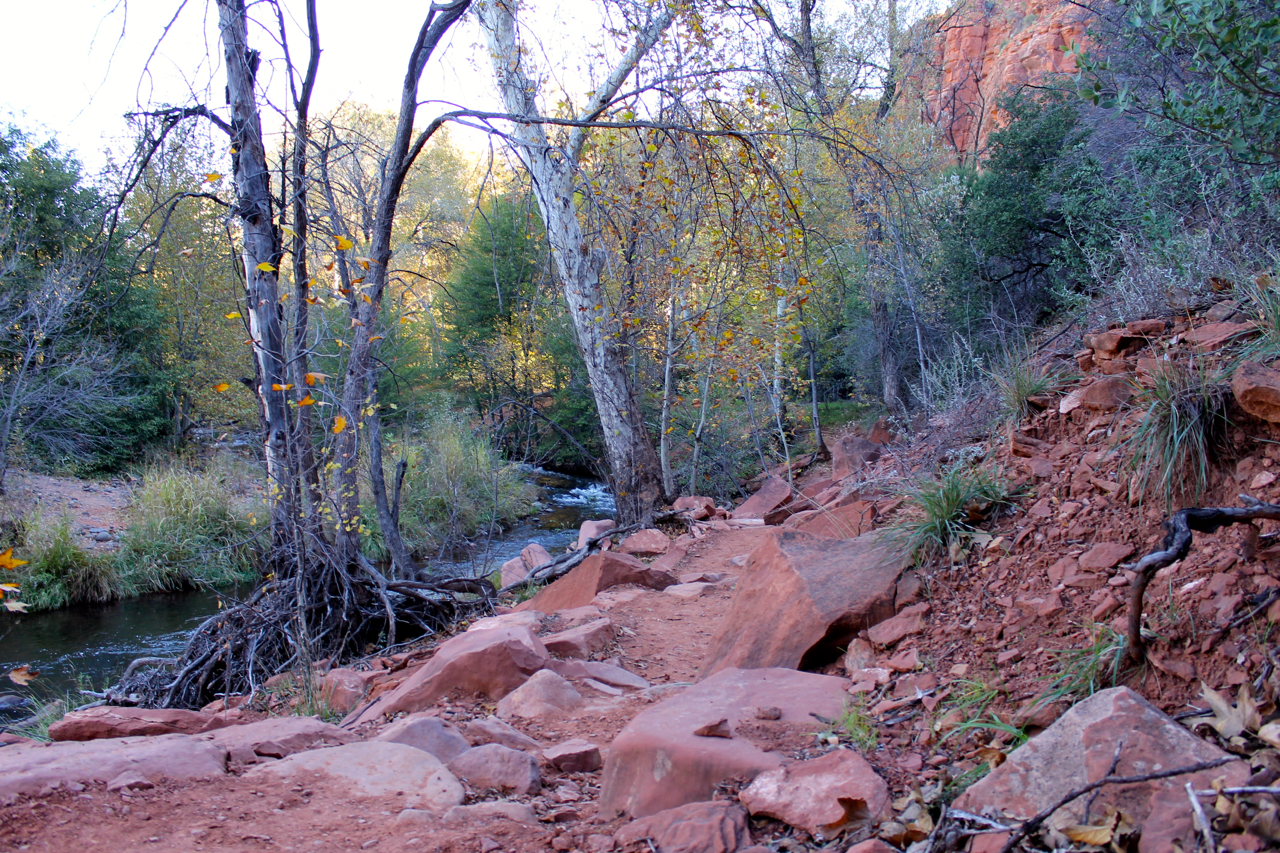 We traversed the Baldwin and Templeton trails on our way to Hiline. While these trails offered some quality mountain biking and good tech, they weren’t my favorites. While I’ve heard some people refer to these as some of the best trails in Sedona, I think that’s merely because riders aren’t acquainted with the newer trails in the area: Baldwin and Templeton have been bike-legal for a very long time. But since they’re so close to town and they provide access to popular rock formations, these trails were crowded with hikers, even during the day, mid-week, during the shoulder season. But if you have to use some trails to access the goods, these were exemplary approaches!

Before we hit Hiline we shredded a few fast laps down Slim Shady, which offers some seriously entertaining, chunky descending! There aren’t many long descents in Sedona, and this one was over pretty quickly, but it’d definitely be worth lapping if you had the legs for it.

Eventually we turned up toward a nearby rock cliff, geared down, and began the grunt. But as is common in Sedona, we reached the top of our main climb before I knew it. It must just be a matter of perspective–after living in the mountains of North Georgia for four years and then moving to the Colorado Rockies, it takes a lot to make me think that a climb qualifies as “long.” With Sedona, the grunts up to the benches are usually short and over quickly… but compared to riding in places like the Midwest or even central Georgia, they definitely count as “climbs.”

Finally, after messing around on the lower trails for over an hour, we’d made our way to the main feature: Hiline. 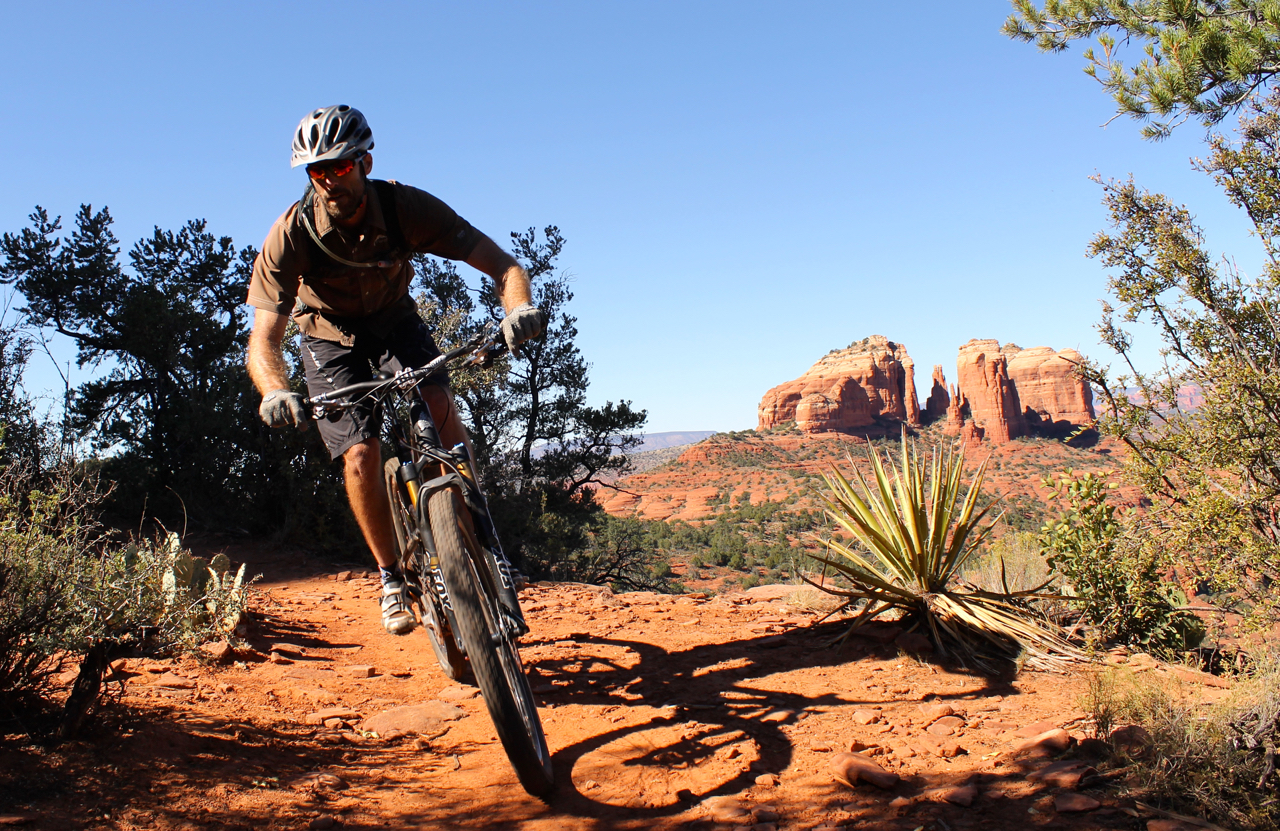 The first main section of Hiline is a pretty mild trail running along a high bench, with some technical red rock sections mixed in. But what sets this section of trail apart from others we’d already ridden was its sheer epicness! Some sections of trail were ridiculously exposed with steep mountain sides dropping away below us, but this location on the knife-edge offered up astounding, breathtaking views of the surrounding areas. As we rode, Matt pointed out trails we’d ridden earlier in the week, rock formations, different parts of the town of Sedona and the Village of Oak Creek, and more. The views from this trail were breathtaking, and I found myself stopping constantly to pull out the camera and trying to capture the beauty. But of course, I couldn’t truly capture the grandeur of those towering rock spires.

Hiline is split into two sections: the bench, and the descent. Oh. My. Gosh. The descent! We dropped in and proceeded to shralp the knobs off of our tires! This descent is labeled as double black diamond and replete with warning signs, but despite some serious technical challenge I found it to be more entertaining and “yee-haw!”-inducing than white-knuckled riding (that was reserved for Hangover the next day). There are some serious rock rolls, rock gardens, switchbacked corners, exposed sections, and optional drops, but this entire descent is quite rideable and rip-able, as I proved on my first time riding the trail. If you’re into technical descending, the double black diamond danger signs let you know you’re going the right way! 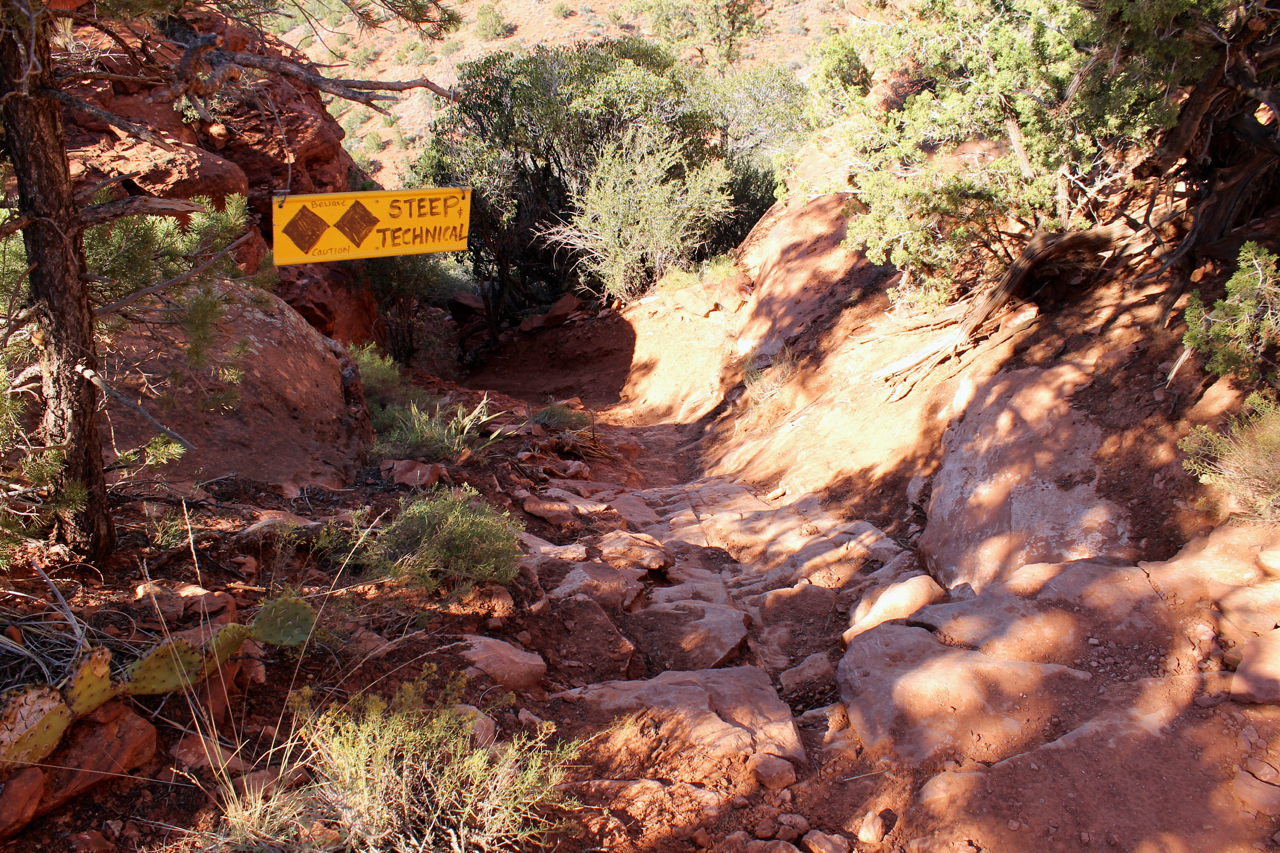 Enough talk; let these pictures give you a glimpse of what this lengthy (for Sedona) descent is like: 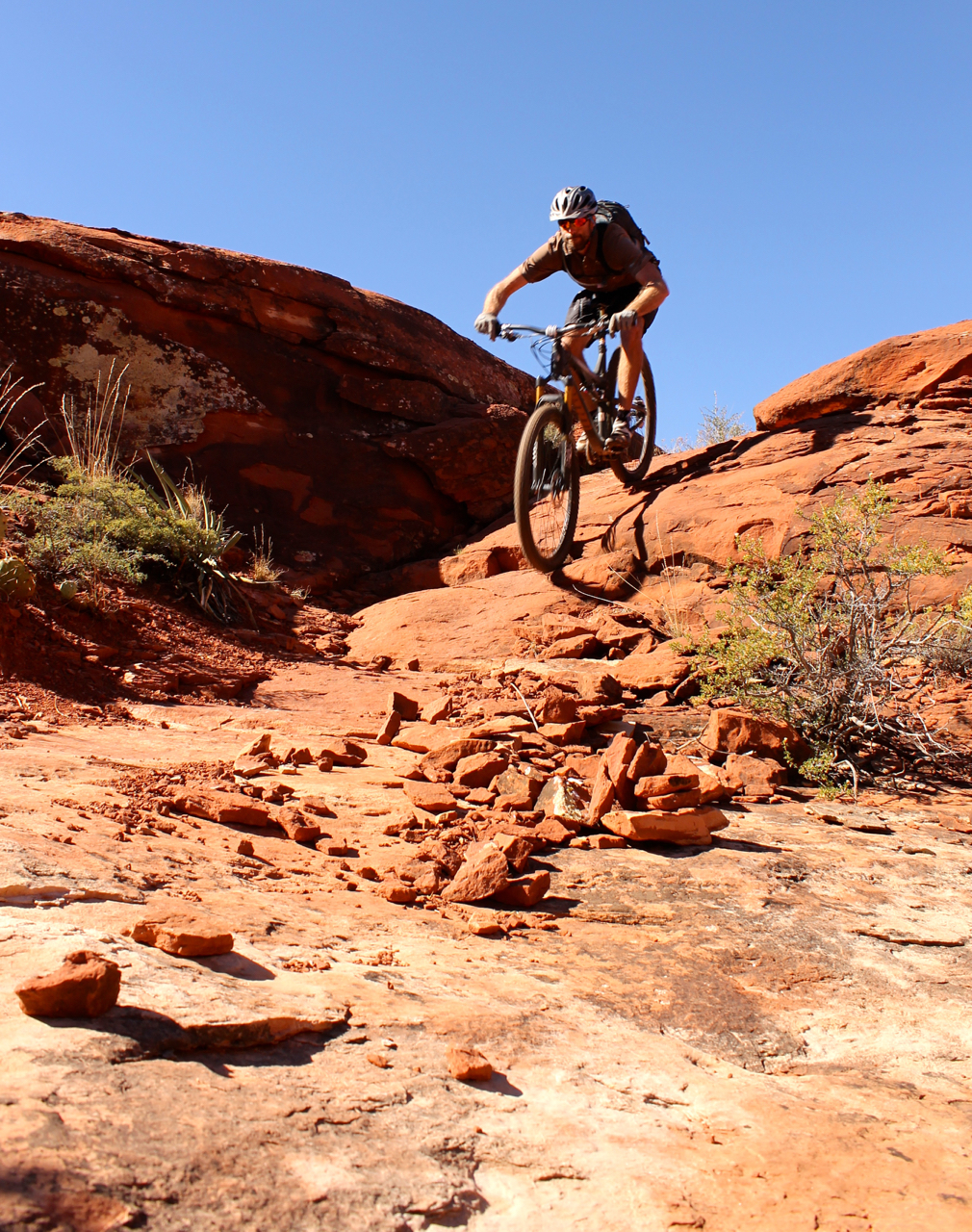 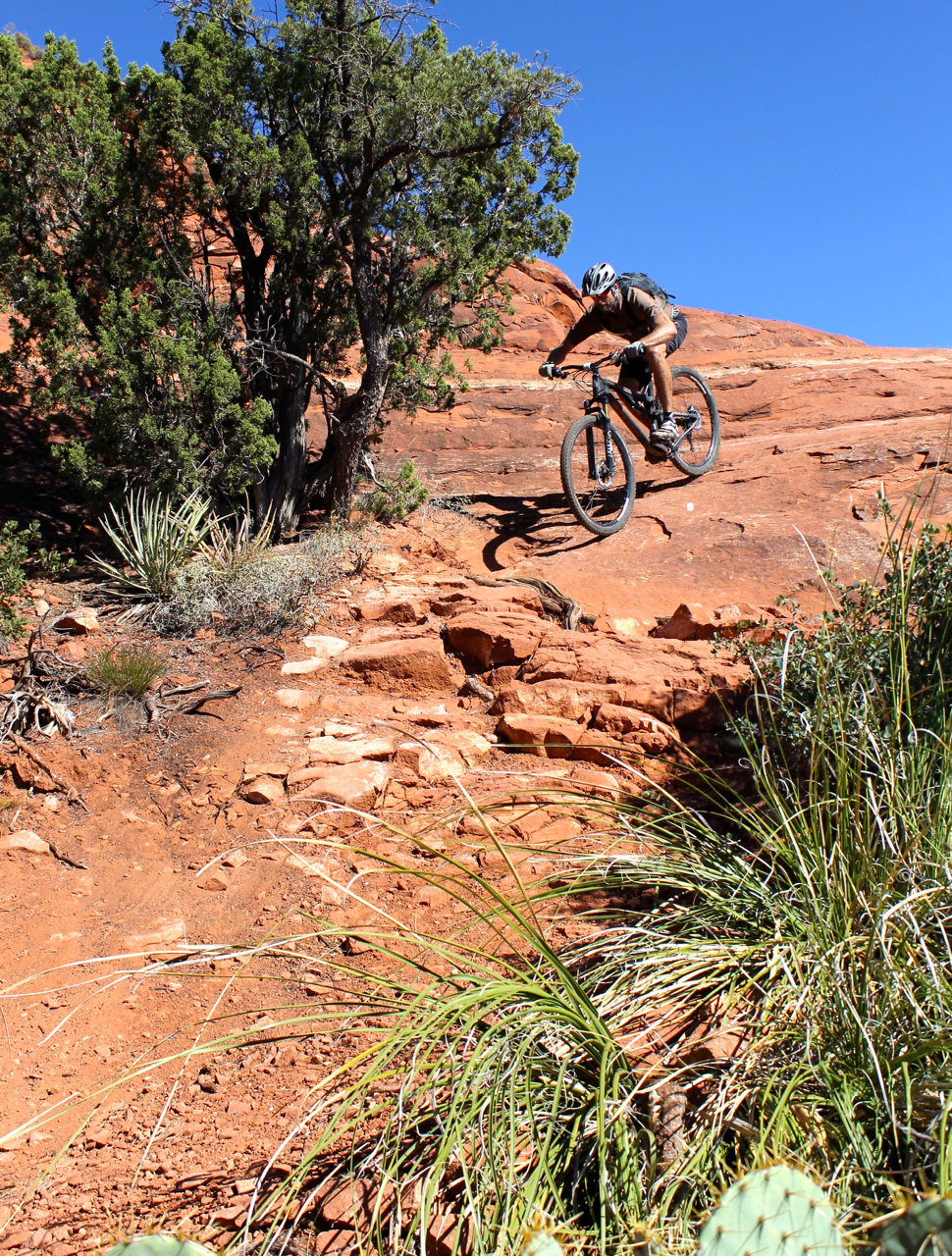 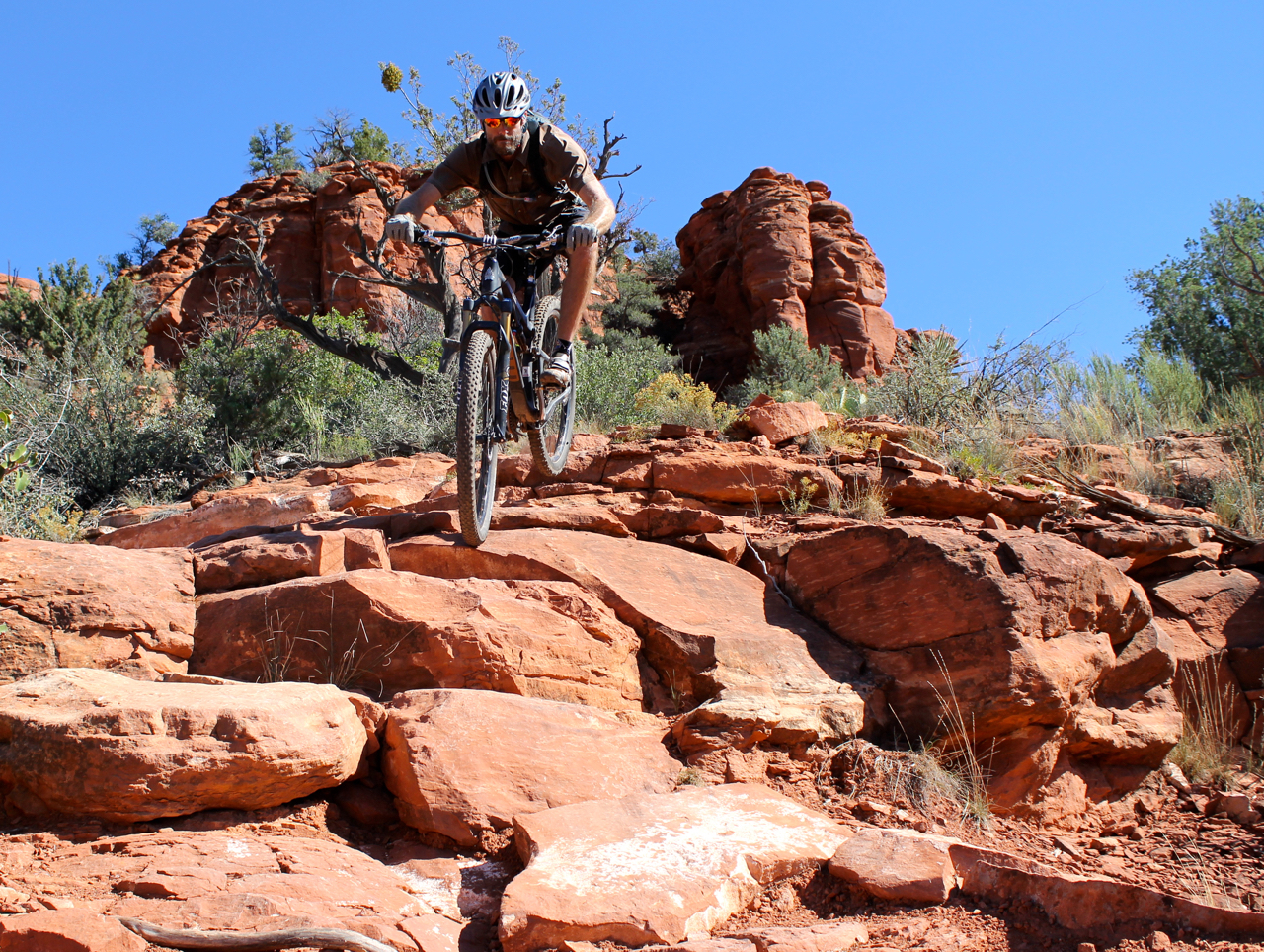 Once down, we took Baldwin back to the creek, and then crossed back to our vehicle.

While I’d already been impressed with Sedona mountain biking, Hiline solidified the epicness and grandeur of this destination in my mind, along with the ingenuity of the local trail builders. Hiline is a must-ride trail for every mountain biker. If you come to Sedona and don’t ride this trail, or if you ride it and you don’t think it’s one of the best slices of dirt and rock in the world… I don’t think we can be friends.

As you can see, I was thoroughly impressed by Hiline. But our final ride of the week, on the Hangover trail, would lay Hiline, and almost every other desert trail I’ve ridden, to waste. Tune in tomorrow to get the scoop!

Gear
Winter MTB Deals Up to 50% Off: Five Ten, Gore...
Gear
Our Favorite Mountain Bikes of 2022, And All the Rest...
Gear
This Gift for Mountain Bikers Will Knock Their Socks Off
Community
In Defense of Fat Bikes
Subscribe
Login
Please login to comment
2 Comments
Most Voted
Newest Oldest
Inline Feedbacks
View all comments

Very cool. I am stoked to be riding these soon…and am thankful for the timing and thoroughness of your articles right before my trip! What kind of bike would your recommend (to rent) to ride these trails for people that are new to the area, and want to (and can) shred anything? A pedally trail bike like the Yeti 5c, or a gunslinger like the Pivot Mach 6? I’m asking for a friend…. 🙂

I was riding a pretty aggressive 6″ travel AM bike, but many times I was wishing for a bit more pedally of a bike. I wouldn’t go with TOO short of a travel bike, but a nice pedaling platform wouldn’t be amiss for these rolling trails and punchy climbs.

Now granted, as you’ve read in this article (and you will read tomorrow) there are some RIDICULOUSLY technical trails in Sedona. If I was you I’d play to your personal preference.