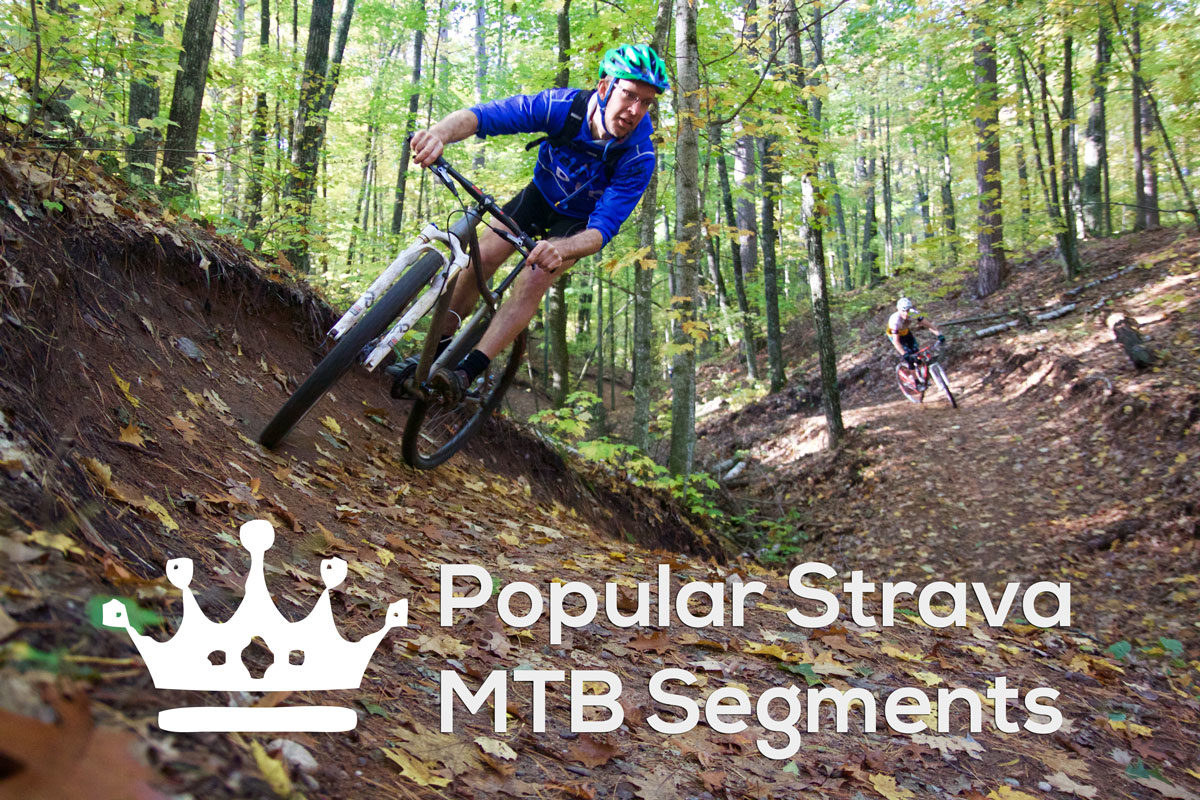 Love it or hate it, Strava is making its mark on mountain biking. Countless mountain bikers all around the world are using Strava to track rides, compete in virtual races, and share adventures with friends. So, we decided to take a look at some of the most popular mountain bike trail segments on Strava to see where all the action is taking place!

For those who aren’t familiar with Strava, segments are created by Strava users within trail systems for the purpose of virtual mountain bike racing. Once someone creates a segment, anyone else who happens to ride this same section of trail is entered into the virtual race, with an online leaderboard to show how everyone ranks. The segments listed below are among some of the most popular Strava mountain bike segments I was able to find.

Not only is “Just the Spine” one of the most popular Strava segments I found, but it’s also the shortest one I’ve ever seen: 0.00 miles long. I’m not even sure how it’s possible to create such a short segment, but either way, a lot of people have passed through this section of the Wasatch Crest Trail–7,979 of them, to be exact.

This is a steep downhill segment, with a 22% negative grade, losing 70 feet in 0.00 miles, so apparently it’s like riding down a vertical wall. Someone rode this stretch in just 8 seconds, with the next closest person completing the segment in 12 seconds. Somehow a few people managed to take more than 20 minutes to complete this short stretch of trail, so clearly it is difficult.

Prime Cut is part of the popular 18 Road trail system in Fruita, CO, and many riders climb this trail to access great descents like PBR and Kessel Run. This segment climbs a little under 200 feet in less than a mile at a 4% grade. Sepp Kuss and Ben Sonntag, both pro cyclists from Durango, CO, currently have the two fastest times on this section at 3:52 and 4:00 respectively. That’s about 13mph going uphill!

More than 8,100 mountain bikers have attempted this section of Prime Cut, which isn’t surprising given how popular Fruita has become among mountain bike tourists. Those 8,173 riders made 31,687 attempts on this segment, which works out to just under 4 attempts per person. As we’ll see for other trails, this is a fairly low number of attempts per rider compared to segments located near population centers.

This is another Fruita-area climb, but on the other side of I-70 from 18 Road. Strava officially rates this 1-mile, 5% grade climb as a Category 4 climb, which tends to attract even road cyclists to make an attempt. Top times for this segment are under 5 minutes, 30 seconds with top riders crushing 11mph on average to get to the top.

Many riders choose to bikepack the entire Kokopelli’s Trail from Fruita to Moab, and this segment is basically the first stretch that everyone completes. Not only that, it’s also popular with day-trippers riding Horsethief Bench Trail, where this section of Kokopelli’s Trail is also known as Mary’s Trail.

I don’t like to brag, but only 740 mountain bikers have ridden the Cholla Trail in Aliso and Wood Canyons Wilderness Park faster than me. I averaged 4.9mph up this 13% grade, but the fastest guys nearly doubled that! With 8,470 riders who have completed this segment, there are some pretty famous names on the list like MTB-Hall-of-Famer, Brian Lopes (#2 overall).

Aliso and Wood Canyons is a popular riding spot among locals who have racked up an impressive 100,920 attempts on this segment alone. That works out to nearly 12 attempts per person, though I have to say I personally only attempted this section once. As a connector trail between the Wood Canyon and West Ridge Trails, many riders will complete this climb more than once in a single ride, which also helps explain the high number of attempts per rider.

At first glance it might seem this segment is a ripping descent, but it turns out only the first half of this segment along the Serpentine Trail goes down. Riders descend about 80 feet in 0.2 miles, then climb back that much and more over the next 0.2 miles. So to land at the top of this leaderboard, riders need to be both fast descenders and strong climbers. The top rider posted an average speed of 22.9mph which appears a little suspect, considering the second place rider averaged 15.4mph. Oh well, no one ever claimed Strava leaderboards are completely accurate.

The Mountain Bike Hall of Fame recently relocated to Fairfax, and Camp Tamarancho, where the Serpentine Trail is located, is about as close as mountain bikers can get to riding Mount Tam, where the sport of mountain biking was born. Judging by the ratio of attempts to riders, it would seem many out-of-town riders have completed this segment as a part of their pilgrimage.

Click to page two for the 5 most popular MTB segments on Strava!

This is what’s crazy about Strava. I’m the King of the World — on a 3 minute segment.

We have a local 8 mile loop that has EIGHTEEN segments.

Also, get off my lawn!

I know Strava gets a lot of hate, but I really enjoy using it – especially where I am since I’ve done the local trails a million times and they aren’t exactly great in the first place. The only annoyance is the closest trail has changed over the years and Strava doesn’t take it into account so now the trail is longer and you’re compared against people who did it years ago when the trail was shorter. I’ve even tried creating new segments and Strava still matches old rides to it. I just end up comparing myself to people who have rides from the last year or so. Regardless, I enjoy using it and it both gets me riding more and pushing myself to be in better shape.