Some years ago I had been alerted to the idea that Noble Canyon was the best ride in Southern California. As such, I quickly placed it on my bucket list, not really expecting to actually get around to it. After all, San Diego isn’t really a mountain biking destination, and has precious little else to recommend it as such, so I sure wasn’t going to make a biking trip there. But when my daughter called from Montana State University and said she had a conference to attend in San Diego, I knew it was time to kill two birds with one stone. One trip would allow me to see my daughter in the middle of the school year, and that trip would take me very close to Noble Canyon. Serendipity. 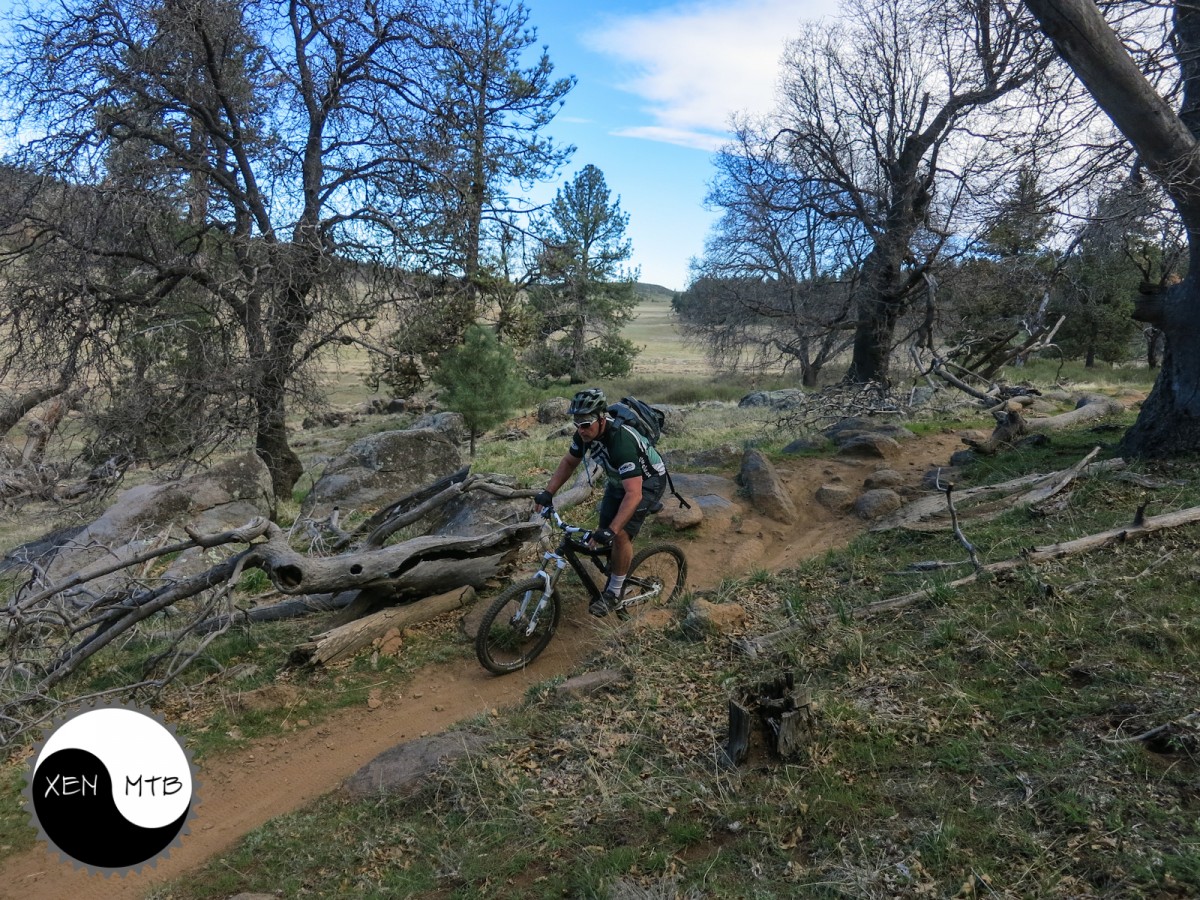 Making the pot even sweeter was the timing: my daughter’s conference was the same week as my son’s spring break, which would also be a great time of year to hit this trail.  As usual, we planned a number of riding stops on our journey, but left the bulk of the time open for other family events.  As I began planning in earnest for Noble, I ran into two potential difficulties.

First, the ride requires a shuttle or a whole lot of boring road climbing.  Second, as I did more research, I found reviews to be rather mixed.  Would I be putting all this effort into a ride which would not live up to my original impression?  The first was easily solved as I contacted Mark Warrick, owner and operator of Xen MTB to inquire about guiding, which would also provide me with the necessary shuttle.  While outside his usual LA/Orange County stomping grounds, Mark was glad to arrange the service, and the shuttle dilemma was solved.  Not only would we have a shuttle, we’d also have a guide, which would make me more comfortable with poking around and exploring an unfamiliar trail system far from home while on a tight schedule.  The second concern–would it be worth it–we were now committed to finding out.

We met Mark in the town of Pine Valley for a hearty breakfast where we discussed XEN MTB, which is borne of Mark’s love of trails (I could relate) and his desire to share them with others.  To date, Xen is a part time gig for Mark, and we were fortunate to be able to secure his services on a weekday, which was our only window to be able to ride the trail.  After a solid meal, we drove out to the lower trailhead lying at the bottom of a narrow valley where the temperature was a very brisk 38 degrees Fahrenheit. Isn’t this Southern California? Isn’t it Spring? What gives?  But I knew that the chill air was the result of two things: first, the sun had yet to reach down into the deep valley and second, this was a classic temperature inversion with the cold air sinking right to the bottom. We moved all three bikes into one truck and headed up the mountain where the temp was a balmy 51 degrees.  Perfect riding weather.

Rather than head for the upper trailhead of Noble Canyon, which would actually make for an all-too-quick ride by itself, we instead made for the Big Laguna Trail, which is part of a network which would allow us to rack up some cross country miles in a beautiful ponderosa forest before hitting Noble and beginning the plummet  back to the valley floor.  It was a most welcome addition.

Big Laguna begins at roughly 6,000ft and provides easy-but-classic pine forest riding.  The area looked much like my home stomping grounds in central Colorado, except these ponderosa pines were much bigger than the ones at home.  While nothing like California’s famed redwoods, they would have towered over my local trees.  Overall, the area felt like home, but on a grander scale.  Along the way, Mark played naturalist as well as guide, clueing us in to everything from the habits of local woodpeckers to showing us carvings in the native rock left behind by Native Americans. 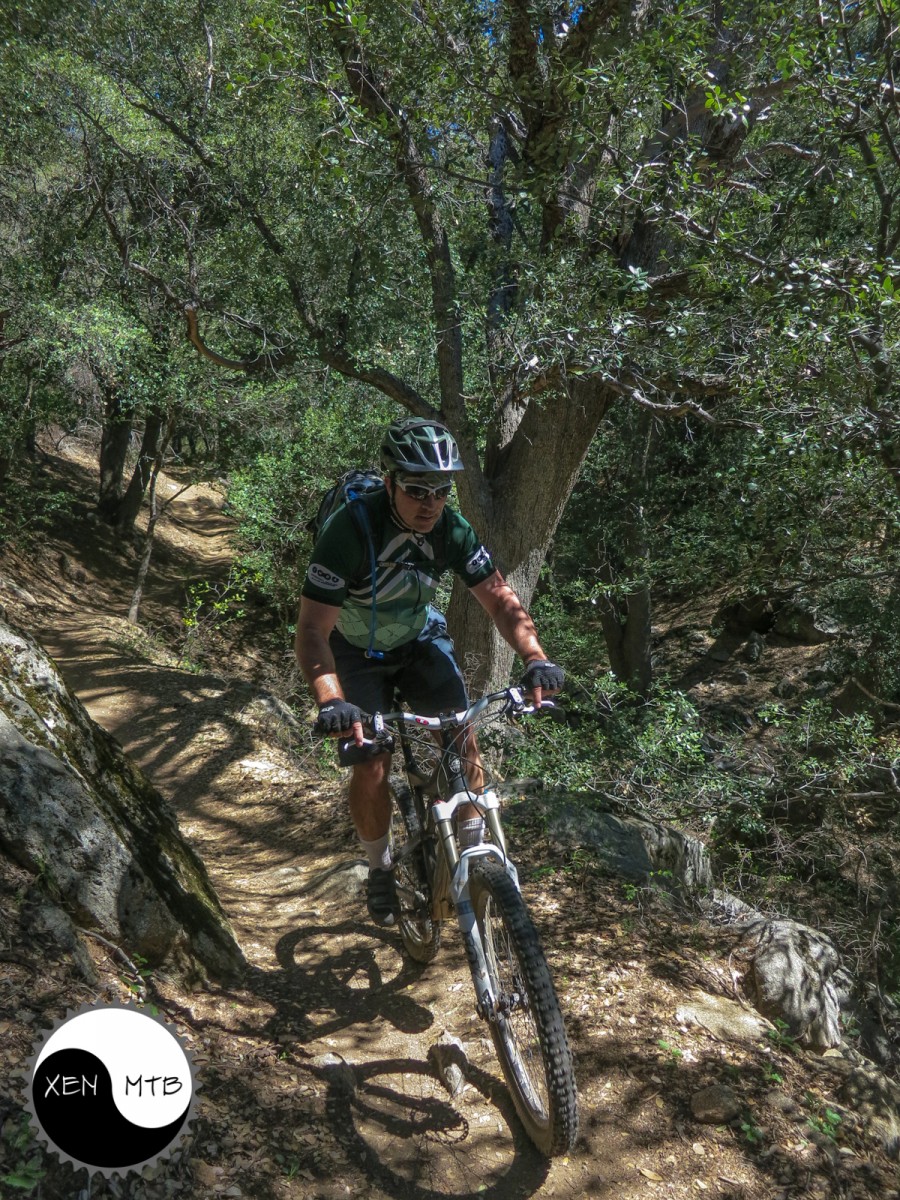 Since we had some time and a yearning to explore, Mark led us on a number of spurs, some more interesting than others. Since this wasn’t a traditional route on Xen’s menu, we spent a good deal of time with maps and apps looking for scenery, overlooks, loop opportunities, and anything else we could find to round out the experience.  Not all trails were on the map, some trails on the map were no more, and the trails that were there, were not always marked and, in at least one instance, a marked trail was marked wrong.  About the time we started feeling like exiles in search of the promised land, we decided to head back to a known point and make for Noble, as Miniskibum and I had a curfew to be back in the city with the rest of the family. 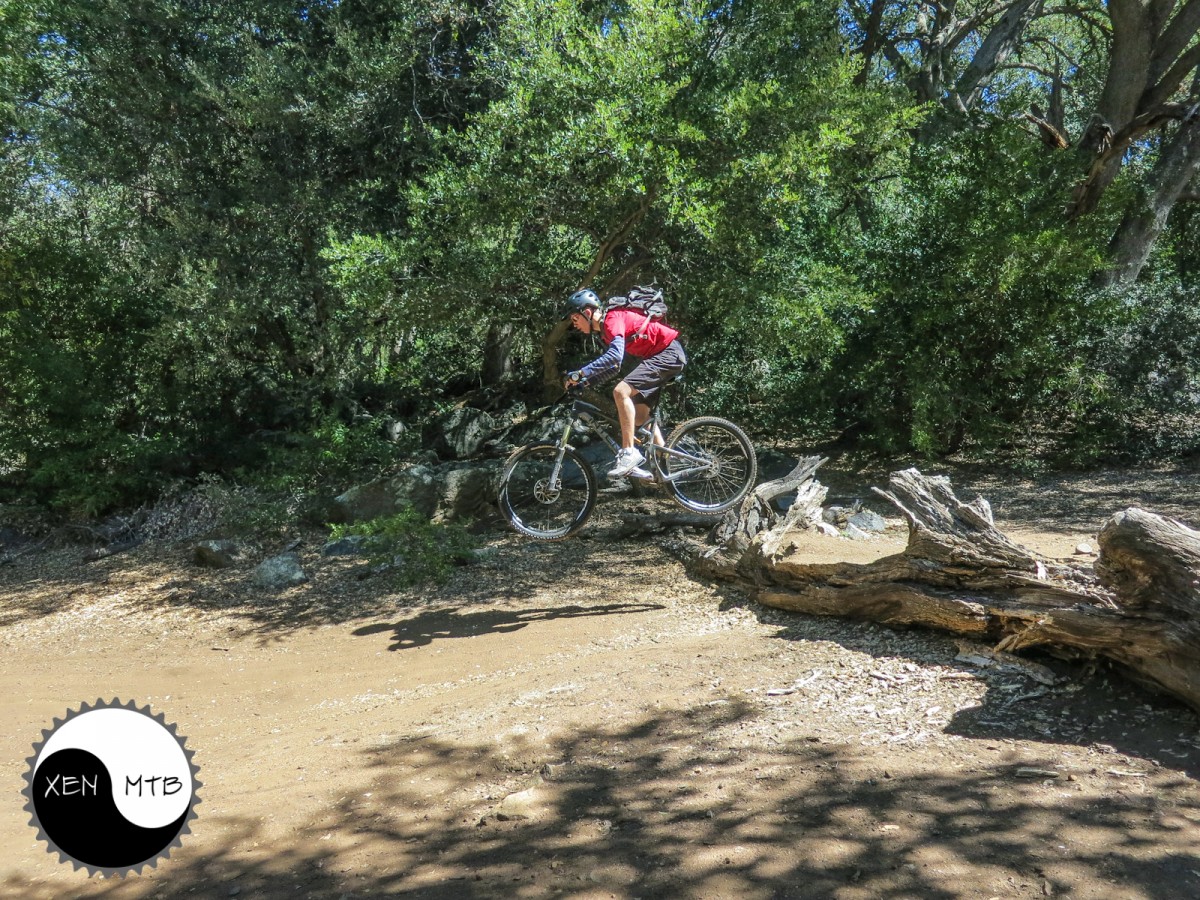 Upon hitting Noble Canyon, the fun factor ratcheted up quickly. As we quickly dropped altitude, we left the ponderosa forest and things got a bit drier. The dry trail snaked up, down, and around the contours of the Laguna Mountains before dropping hard into a deciduous forest. This is where things really got interesting: the trail became steeper, rockier, narrower, and twistier. The trees also had us constantly and rapidly alternating between brilliant sunshine and heavy darkness, as though we were riding by Mother Nature’s biggest strobe light. This is also another point where having a guide became an asset. There were two features along the ride I was looking forward to: the “Stairway to Hell,” an extended rock garden on a serious tilt, and the “Widowmaker,” a short but intense piece of gnar reputed to have taken more than its share of collar bones. It turns out the main trail was rerouted around the Widowmaker and while it is visible from the new route, we would have blown right by it without Mark’s counsel.  It was well-worth the trip back up that stretch, just to give it a go.

Shortly before emerging from the deep deciduous forest, we came across a boulder field, a few of which make for great huckortunities.  After playing a short while, it was time to get back on the trail, which now emerged into the lower sun-scorched, very desert-like hills.  Here we would actually find some of the more demanding technical challenges, including jagged rocks and sharp ledges on tight switchbacks. Some of these spots lent themselves more to low-speed maneuvering than the high speed ripping we had been doing above.  At this point we were really running low on time and Mark came in handy again, showing us a quick exit to a fire road which would deliver us back to the lower trailhead much more quickly than the dry, rocky, brutal climb out of the bottom of the canyon. This was also quite welcome as it had now become blazing hot and water was running low.

All in all, we put in 24 miles with about 1,400ft of climbing–a lot more than we expected on a shuttle ride. But it never felt taxing, and there was a great variety of fun to be had throughout the ride. During breakfast, Mark had told me he thought there were better rides to be had in SoCal and he may be right, but I found the Big Laguna/Noble combo to be everything I had hoped for, and then some. It had everything I look for in a ride, except for a big climb and, truth be told, I can live without that now and then. The variety offered by the route, both in terms of scenery and trail types, was exceptional and actually perfect for a short attention span kind of guy like me. I would gladly go back any time.

Thanks to Mark Warrick of Xen MTB for a day of fun in sunny Southern California.  As you can see, the Xen MTB pics Mark took are very nice–Mark includes sharing his photography as part of his guiding service.

Great article and very well written, enough so to keep a Noble Canyon regular entertained. I don’t personally ride north of Orange County so while there may be some really great rides up in the LA mountains, I wouldn’t know about them. So to me, growing up in OC and living in San Diego County for 30 years, Noble has become the defacto best trail in SoCal. However, that’s all because Hurkey Creek in Idyllwild burned down in 2012 or 13. If the enviro nazis weren’t so strong in SoCal, I’m totally sure that the best riding, epic riding of any length, could be had in the Big Bear area. However, getting anything built here requires an act of God.

Thanks for the response!

On a related note, we did go through Idyllwild on the way home. Turkey Creek was off the menu, but in spite of the loss, there turned out to be tons of great singletack on the other side of town. There will be a ride report forthcoming for that one as well.

Nice photos and review!
Re the official map: “Not all trails were on the map, some trails on the map were no more, and the trails that were there, were not always marked and, in at least one instance, a marked trail was marked wrong.”
I update the trails every so often here:
http://rjs.org/
as they do get closed on occasion over the last 20 years.
Also: “the ride requires a shuttle or a whole lot of boring road climbing” isn’t quite true; Indian Creek trail and Sloan Canyon both get you up with minimum pavement (~a mile either way). And “the dry, rocky, brutal climb out of the bottom of the canyon” isn’t that bad – most call it Extra Credit and it’s ~1/2 shady oaks on the way up. Not a route for soft DH bike though…
Hope to see you here in Pine Valley next time!

Ray,
Great link! Thanks for your work and for sharing.

I’d have been happy to have done “Extra Credit” had I not already ran overtime. If there’s a next time, I’ll be sure to let you know.