Trails. It’s all about the trails. Especially for beginners. While advanced riders may think they “need” gnarly trails, that’s not so much a “need” as it is a “want.” However, for the new rider, having access to suitable trails is positively essential for both their enjoyment and their ability to grow in the sport. So what should a great beginner trail look like? There are a few elements that make up a trail that gives beginners the best chance to stay mountain bikers but not stay beginners.

1. The most obvious element is the difficulty level. Difficulty level can be graded both on an aerobic and a technical scale. If someone is a road biker or is otherwise physically fit, as a beginning mountain biker they may actually be able to handle an aerobically-challenging trail, so the whole range of aerobic difficulty may be open to new mountain bikers. However, technical challenge will greet most new bikers in a similar way, so presenting the right level of technical difficulty is key to maximizing the noob experience.

Contrary to initial thoughts, completely minimizing technical difficulty is not the best level of challenge, even for a new rider. While a great beginner trail shouldn’t put the new rider in danger with technical challenge, that 8-foot-wide, flat, straight, smooth, crushed gravel city path provides little more joy and inspiration for mountain biking than pavement would. A great beginner trail should provide mild obstacles that challenge and inspire without endangering. An occasional dismount is okay, and even welcome, if it appears to the rider to be something attainable with some practice.

2. Accessibility is also important to the new rider. If a rider is not yet fully invested in the sport, a long drive to get to a trailhead may not be an inviting start.

3. Crowding level may also be a concern. In addition to not wanting to have to dodge other trail users, a new rider, even if otherwise self-confident, may be intimidated by having an audience as they develop a new skill.

Here’s a list of 10 great beginner trails from coast to coast, north to south, and points in between, all of which present the new rider with an interesting outing and which are easily-accessible from metropolitan areas. 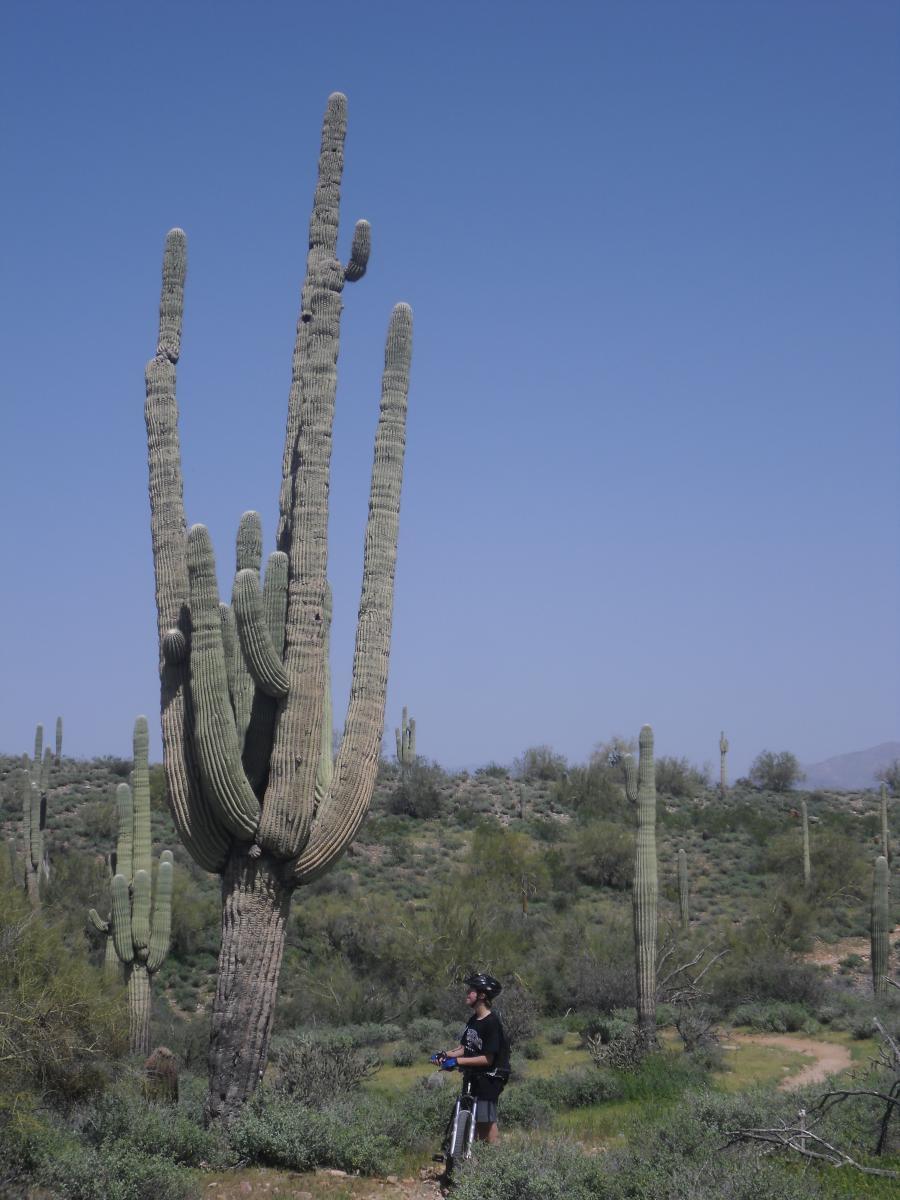 Despite being called a “Mountain Preserve,” the bulk of the trails in the main section of McDowell Mountain Preserve are rather flat. Most importantly, obstacles are few, non-threatening, and the main climb on the former Cactus Cup race route offers an easier ride around for those not wanting to step up the rock on a steep incline. This trail is loaded with “beginner flow, ” giving the new rider plenty of opportunity to practice turning on a secure surface (except for a few sandy washes) and play with adding speed as well. 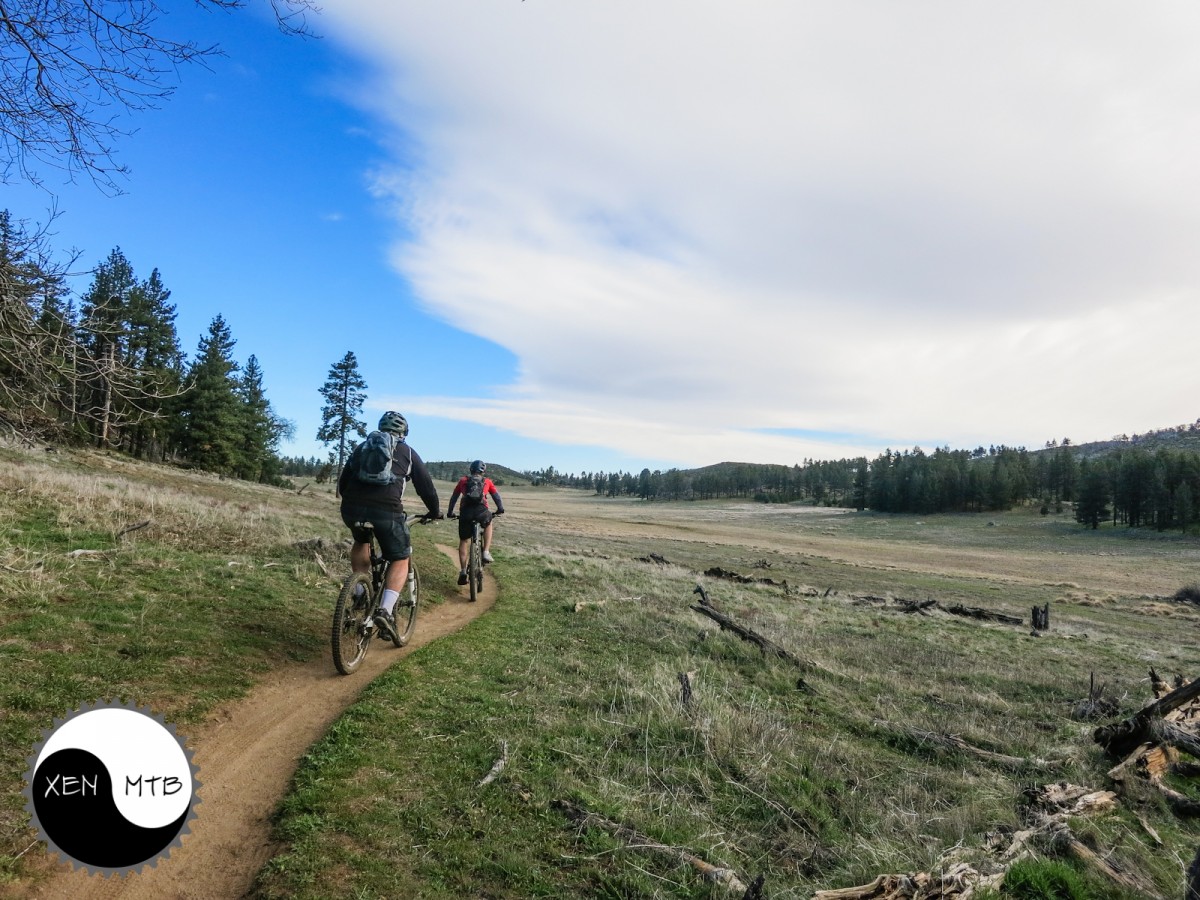 45 minutes east of downtown San Diego lies the Laguna Mountains, home to a marvelous variety of riding. Among this variety is a loop which will both entertain the new rider in a gorgeous ponderosa forest while providing opportunity to hit some moderate climbs and a few small root gardens, to get used to hitting a bit of a bumpy ride.

A marvelous little three-mile loop sits atop a mesa just outside the city of Castle Rock, 20 minutes from Denver. When ridden clockwise from the western trailhead, the rider gets a couple miles of prairie-top grassland before the loop comes around to a mostly-flat slickrock field. There will be one dismount for the new rider, but it’s of the type that will make the noob want to return.

Montana’s capital is surrounded by great mountain bike trails for all ability levels. The Eagle Scout Trail provides a super sweet bit of singletrack for the new rider. The switchbacks are of a gentle grade and have a large enough radius to not threaten a new rider. There’s one sharp climb, but it’s short enough to not be discouraging. Once this trail is mastered, the rider has a perfect step up across the street on Rodney Ridge.

Just outside Sin City lies the hamlet of Blue Diamond, home to more than a hundred miles of singletrack–the vast majority of which is beginner-friendly. A new rider can tool around all day on a variety of trails, all the while in the vicinity of some stellar desert scenery.

Sitting between the city of Albuquerque and the rugged Sandia Mountains lies the Foothills Trail System, which gives an adventurous beginner the perfect lab for stepping up rudimentary skills. The trails are perfect hardpack with some sand, a few tight spots for dodging cactus, and plenty of rocks–but few of which are actually intimidating. As a bonus, an evening ride is likely to provide a beautiful sunset.

Southern Ohio has a good venue for new riders, especially those who aren’t craving speed. The trail snakes through the dense woods, never going straight for any amount of time. The beginner can plod along at first, then learn all about cornering technique one turn at a time.

The Draper Trails are comprised of multiple loops, most of which are perfectly suitable for any level rider. The folks in Oklahoma City have done a marvelous job carving miles of twisty, attractive, and mostly non-threatening singletrack out of the woods adjacent to town.

Just north of the San Antonio International Airport lies McAlister Park, whose trails were carved well before mountain biking became a major sport. Nevertheless, there are riding opportunities here to bring the new rider up to speed, so to speak. At points, smooth hardpack gives way to rocky tread–just enough to shake things up without actually breaking them.

Crowds can be an issue here, so it’s best to hit this right-next-to-the-beltway ride during an off time, if possible. Once in the network, the new rider will have access to easy-to-moderate loops that will thrill but not threaten, with creekside bobbing and weaving giving way to moderate but short climbs and one extended, bermed descent. A couple rock gardens will likely cause a dismount for a newer rider, but again, they are just perfect to invite that rider back for another crack at it.

Most mountain bike destinations cater to hardcore bikers. After all, that’s who’s most likely to invest the time and money to take an MTB-centric vacation. But in recent years, the original mountain bike destination, Moab, has worked hard to attract a broader biking clientele–no doubt motivated by the success of nearby Fruita, with famous beginner routes at 18 Road (Kessel Run) and Kokopelli (Rustler’s Loop). In the early days, new riders would flock to Moab’s most famous Slickrock Trail, only to have their bike, body, or spirit (or all three) broken in the process. With rides like Porcupine Rim and Amasa Back, Moab came to be known as an experts-only destination–that’s all changed now. Moab now has a plethora of beginner-friendly routes to keep even noobs genuinely entertained for a week or more.

The Lazy and EZ trails make a nice loop to break a noob into the Moab experience. Once comfortable there, it’s off to North 40 and then the Bar M trail for actual slickrock riding.

The Intrepid Trail looped with Raven Roll makes a perfect introduction to singletrack. Adding in the Big Chief trail makes for a nine-mile loop with some intermediate spots. Even with at least one dismount and a couple other probables, this is still a very doable adventure. I took my wife, the very antitheses of “extreme” and a never-ever-before mountain biker on this route, and she had a marvelous time.

The Klonzo trails are divided into North and South. The south trails are almost entirely beginner-friendly. Once comfortable there, the rider can progress to the north side for a taste of intermediate riding.

Running adjacent to two buttes named for the two civil war ironclad ships they resemble, this route has extended but mostly smooth slickrock riding–just right for the noob looking for a relatively safe but genuine Moab experience.

Your turn: Where did you start to hone your skills, and what trails facilitated your development and/or love for the sport?

I’ve ridden McDowell Mtn and yes it can be relatively flat, but it’s ALL rock and cactus. So just be aware.
What’s with no PNW trails? Bend has great beginner trails. In Seattle St Edward State Park and Duthie Hill are two great spots for beginners within urban areas.

tnkasper
Thanks for the adds from the Northwest!

In central Florida, Santos has miles of beginner trails to develop skills. I agree with tnkasper, Bend is another great place for beginners. In fact despite the difference in scenery, the trail rating system in Bend and Santos are comparable. Meanwhile in Portland, a beginner can develop their climbing and downhill skills at Powell Butte Nature Park within the city.

I agree, Santos is a great place in Florida to learn. The trails are fun and twisty and you can develop skills and also get the chance to watch the really good riders in the Vortex.

Forgot to add a thanks for these kind of articles. I find them handy on road trips where I often ride solo in new territory. Took up riding a year and a half ago upon retirement (style wise think Bob Cousy not Micheal Jordon) and often just want to get in some miles and enjoy the country.

Awesome article. Taking notes. Many of those would be fun for me even though I fancy myself slightly past beginner. Lol in the Twin Cities, Lebanon Hills stately named ‘green’ trail is perfect. Actually has some fatties that are fun for all, but it’s smooth and doable, and includes a bit of skills area, that has berms, and a slightly down hill pump trail.

Great article and selection of trails!

When you think or Mountain bike riding, most don’t think of Florida. However Florida has some awesome trails. San Flasco, just outside of Gainesville has over 30 miles of trails from beginning to extremely advanced. Cellon Creek trail there, is a wonder twisty up and down trail that will excite any beginner

The Lawrence River Trail in North Lawrence, Kansas along the Kansas River is an awesome place to learn to ride a MTB and when you develop skills it is still fun to go back there and ride as fast as you can. Very flowy with minimal rocks and roots. Lots of man-made tree trunk and other obstacles. It is my “home trail” and very forgiving. I have seen kids like 5 years old there with their parents and some of the “hard core” cross-country racers wearing team racing kit as well. Lots of great “watering holes” in downtown Lawrence nearby to wash down the trail dust after a ride.

Heads up from MA.. Great brook has some great beginner terrain, Russell Mills, Leominster state forest if you have a guide are just a few..

Great article! Nice to see McAllister Park on the list. It really does have a little bit of everything for everyone.