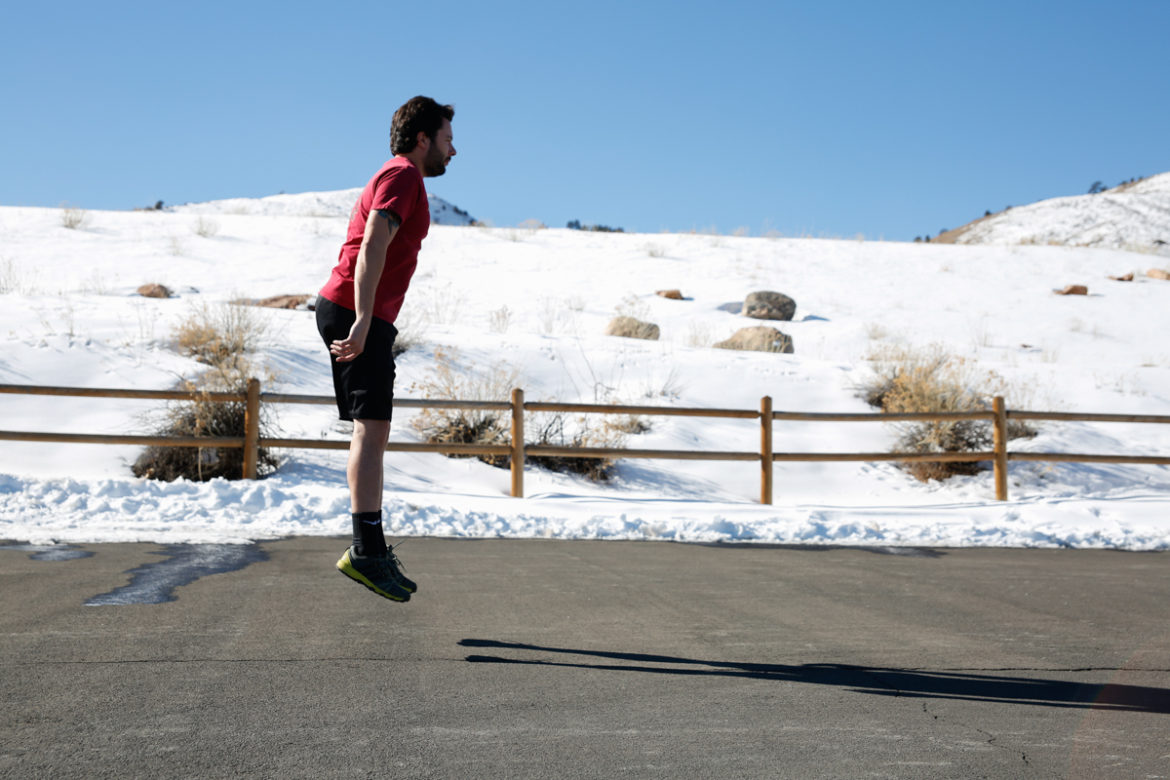 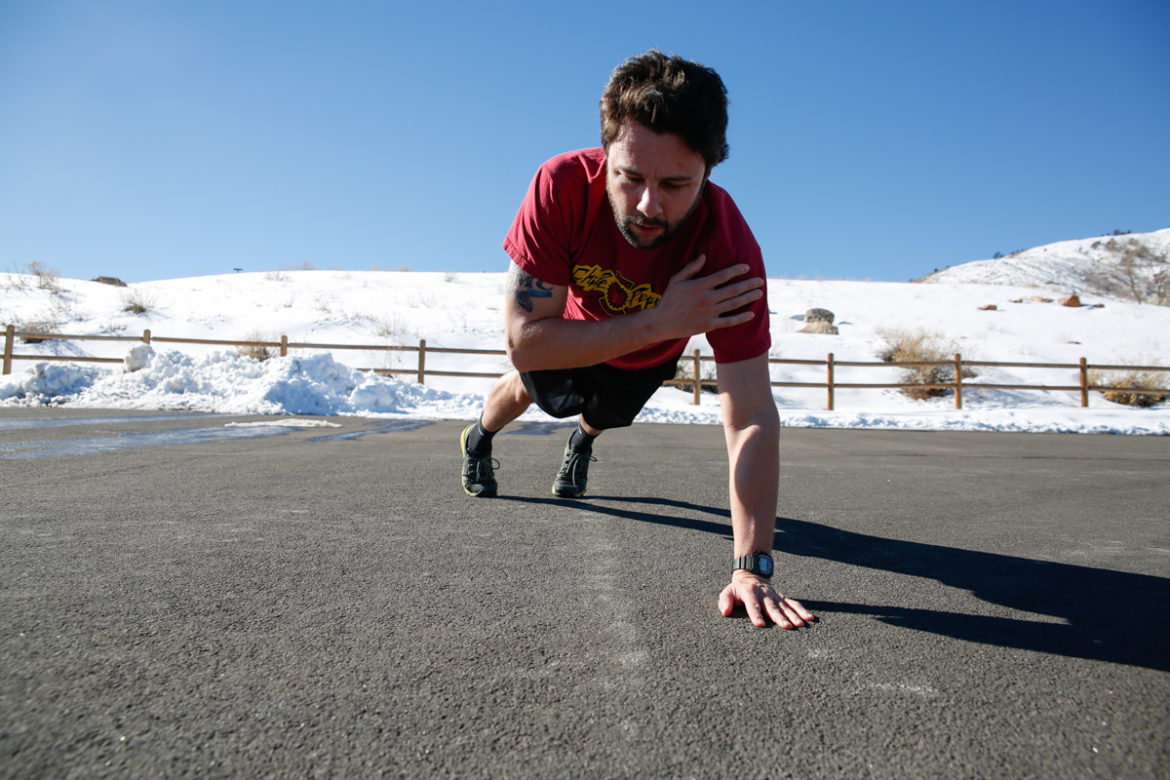 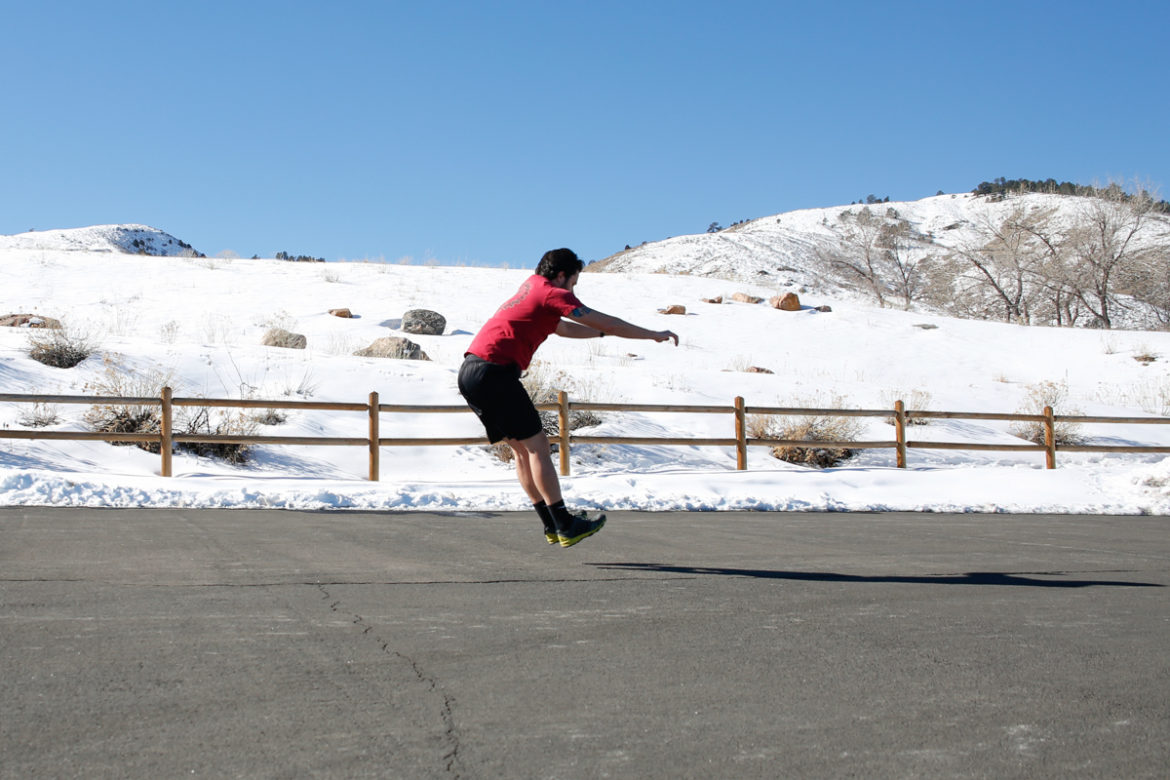 For anyone who wants to be more dynamic and athletic on the mountain bike, strength training should be on the agenda. In January we wrote about five strength training moves that can make riders stronger, more powerful, and even more crash-resistant.

This time, we’ll take some of those a step further, and dive into plyometrics and power development. To get a perspective on how plyometrics can be used in any mountain biker’s fitness routine, I spoke with James Wilson, AKA, BikeJames. Wilson has worked with and developed fitness programs for mountain bike athletes for years. He has also been a guest on our podcast.

Plyometrics refer to a type of power training that uses the stretch-shortening cycle. When muscles are stretched — like quadriceps bending into a squat — they increase in elastic energy that can be released in the shortening phase of the muscle, or the extension or jump phase of the squat.

The benefits of power-based exercises like plyometrics include an increased amount of power, but also better balance and reaction time, and may even reduce the potential for injury. Plyometrics can also increase bone density, which might be more important for cyclists than ever.

James Wilson notes that while plyometrics can be more useful for sports like mixed-martial arts, or basketball, where muscles are loaded and required to change direction more often than in mountain biking, they can also be useful for mountain bike athletes. Plyometrics can help athletes’ upper and lower bodies absorb sustained impacts like those on jump trails or downhill tracks, and develop power for hip-hinging moves like those on pump tracks or in a manual. 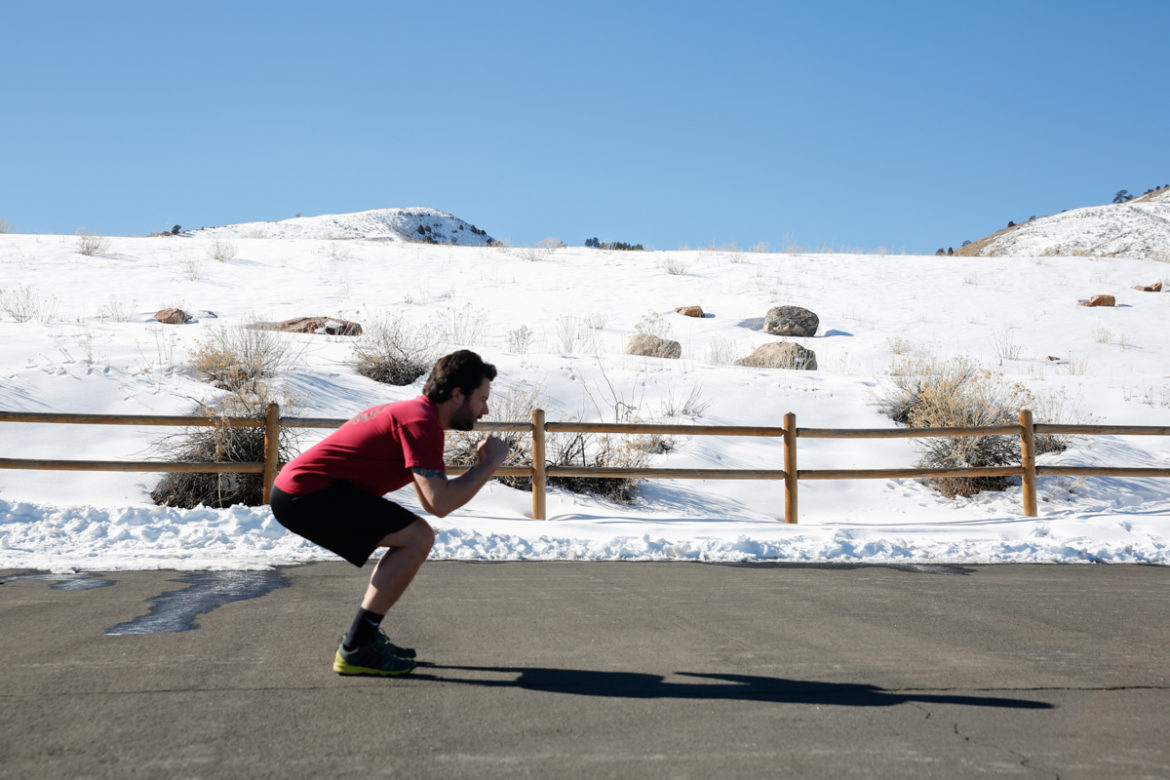 To perform the squat jump, start in a squat position, with your hips pushed back and weight on your heels. Your knees should not be more forward than your toes as the bend should come from having your hips back. You’ll move up to jump, and shift weight from your heels to the ball of your feet, trying to jump as high as possible.

“The vertical jump is closer to the movement you use for standing pedaling,” says Wilson.

Landing the squat jump is almost like performing it in reverse. Try to land in a more mid-foot position and then roll back to your heels. Push your hips back, absorbing the movement for a soft landing. The point of improving your muscle reactivity is to move to the next jump as quickly as possible, so focus on absorbing the landing and exploding into the next jump. 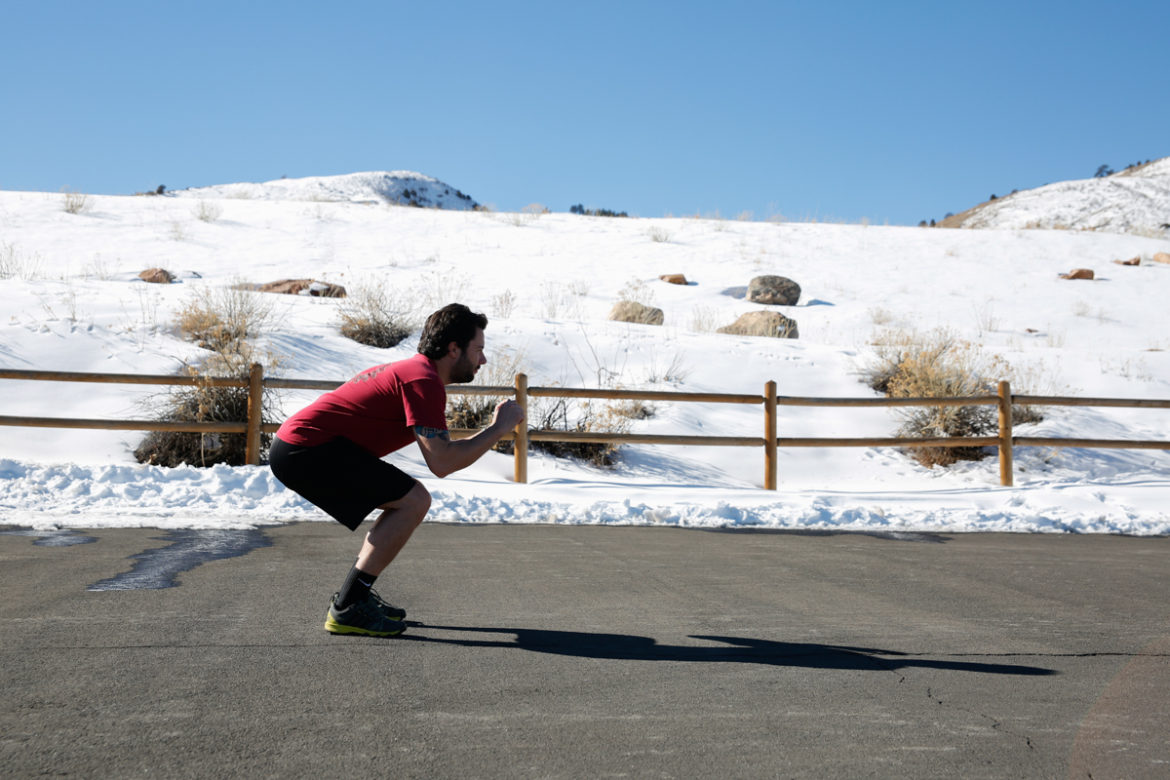 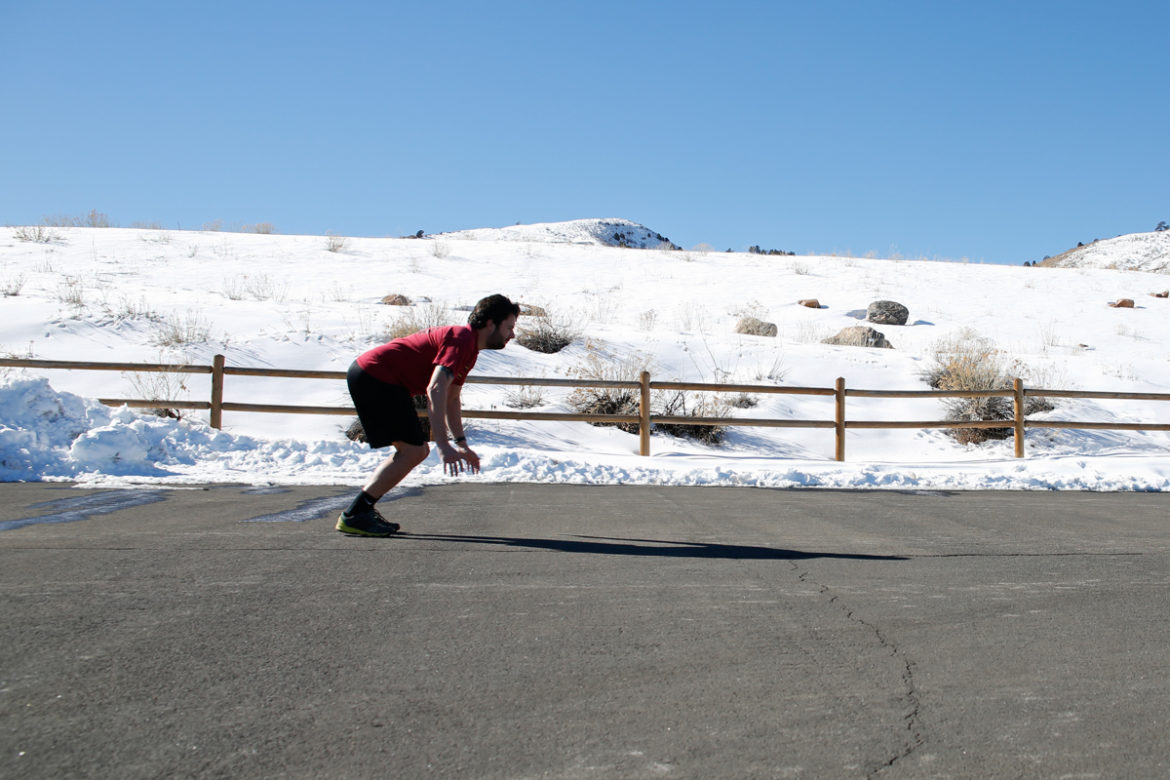 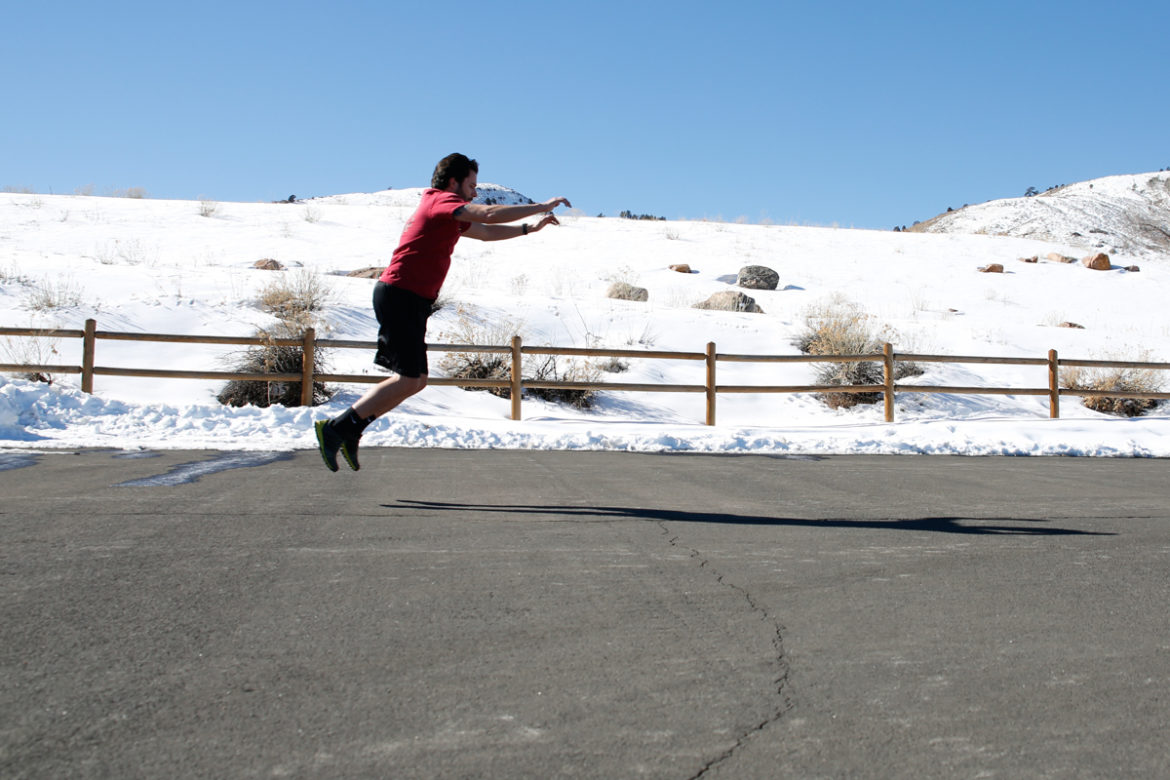 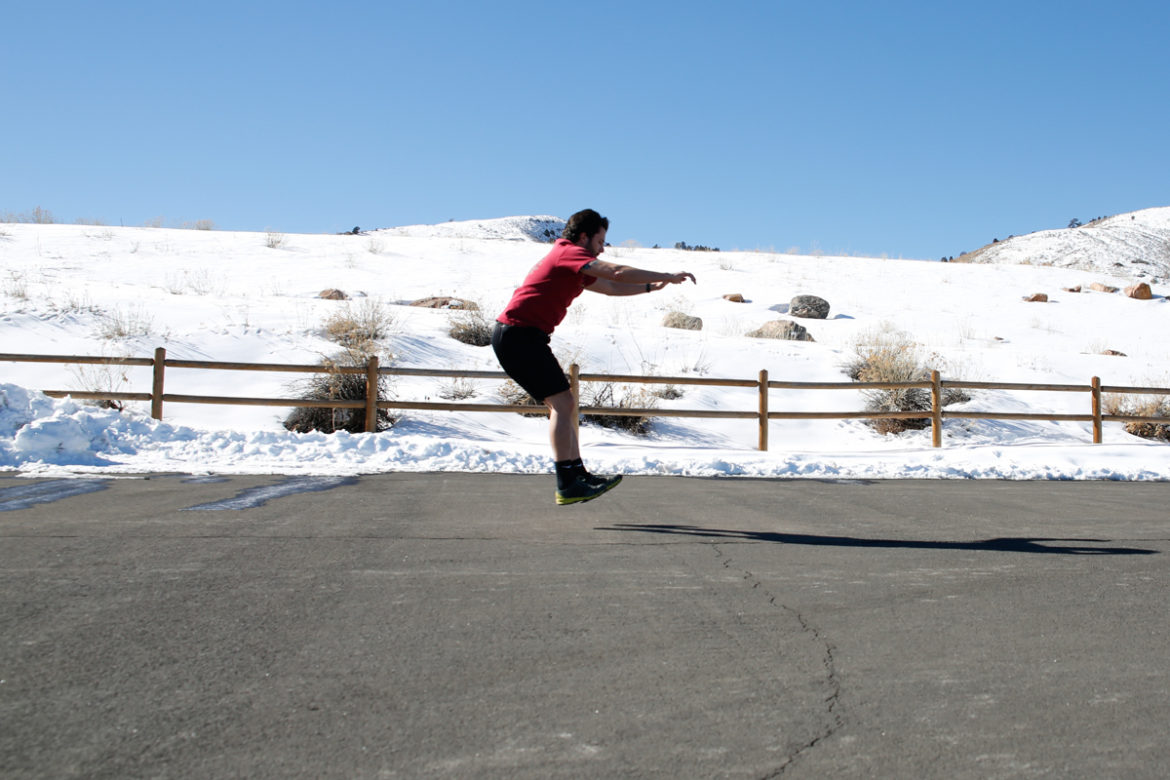 The broad jump starts in the same position as the squat jump, but will be a forward movement, rather than a vertical one. Starting in the squat position, with your hips back, weight on your heels, and knees behind your toes, move your weight to the ball of your feet, and explode forward into a long jump. 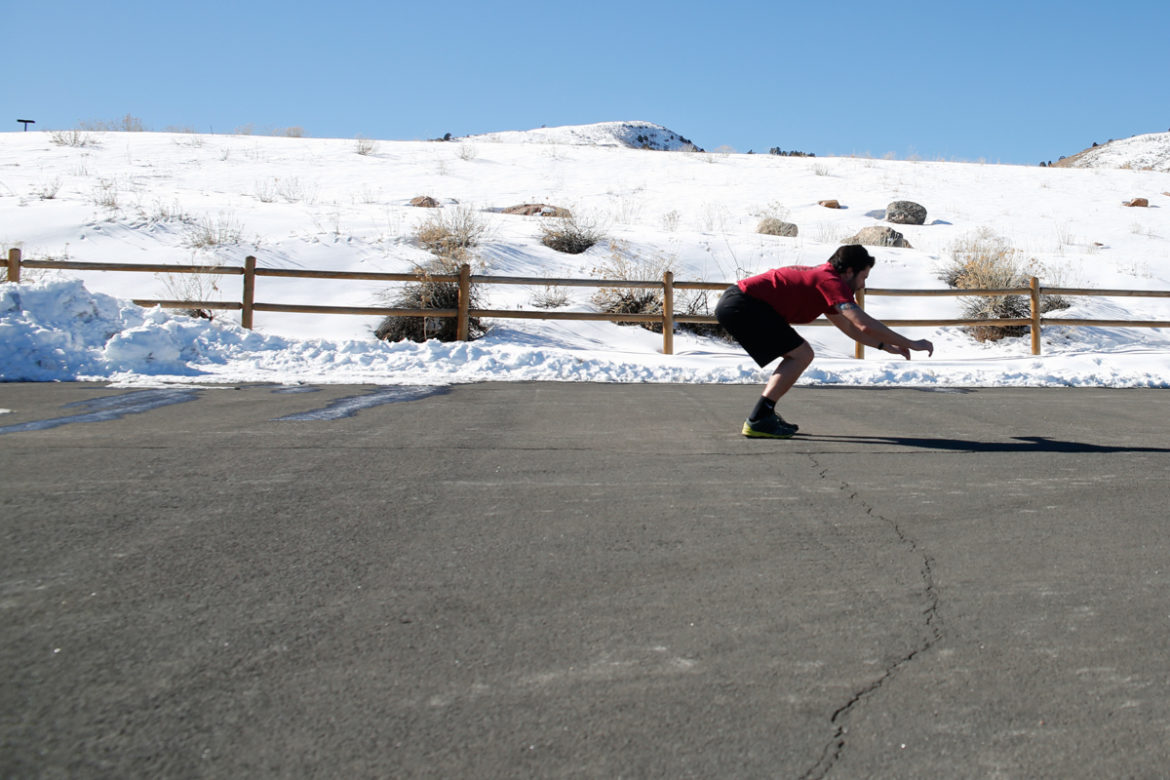 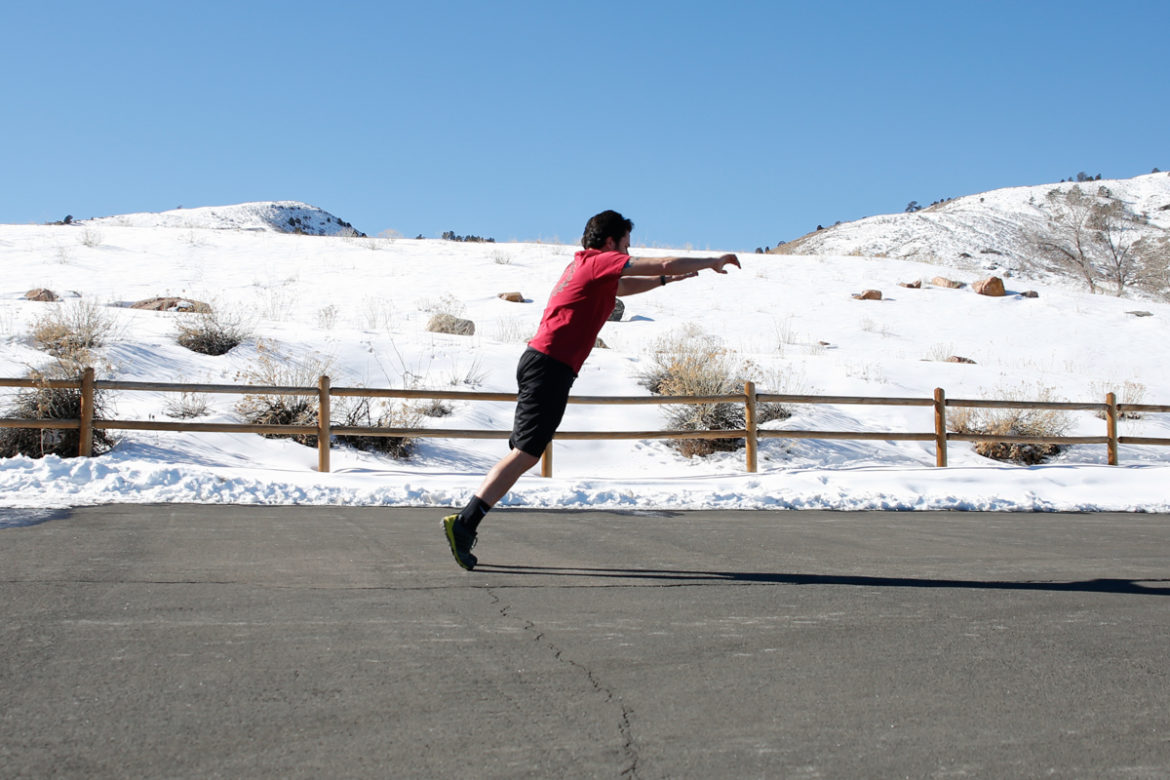 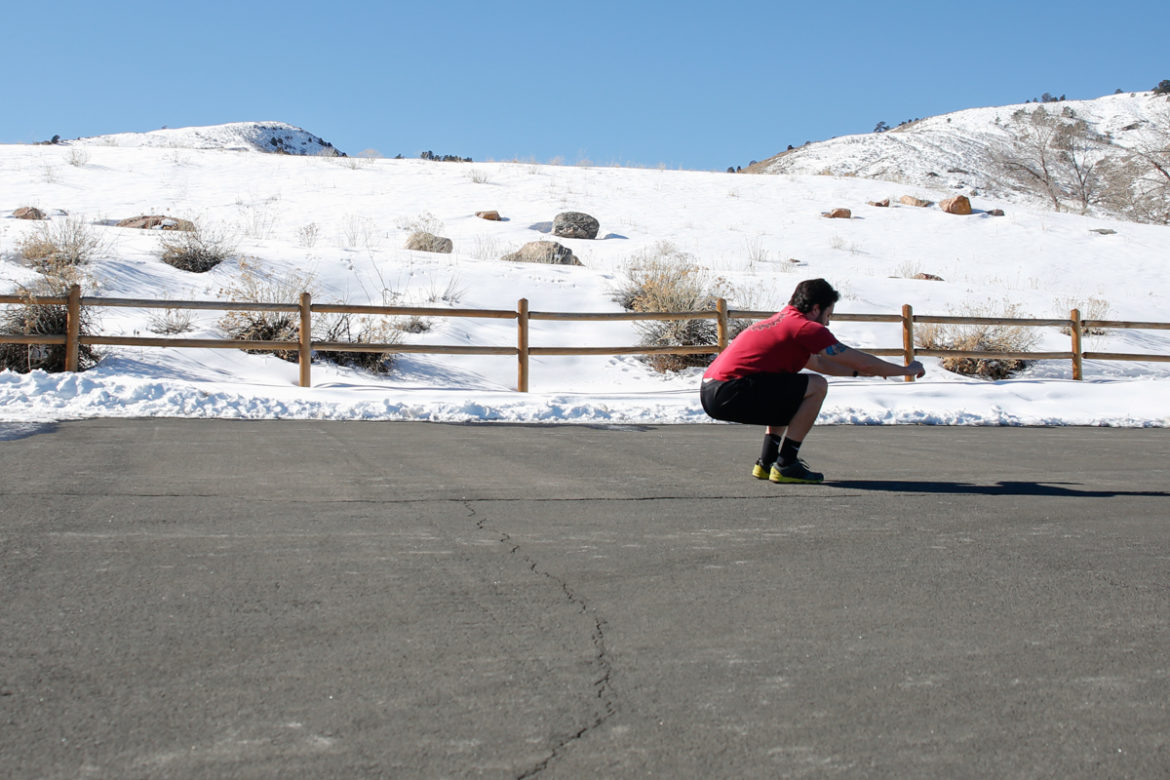 “The broad jump is actually a really good exercise for working on that explosive hip hinge movement you need for manualing, jumping, and the movements you need to drive the bike in front of you with your hips and not your back,” says Wilson.

On the landing, it’s best to land on the mid-foot and absorb the movement into your heels, then hips, and then shift forward again. Go onto the ball of your foot and explode into the next jump. 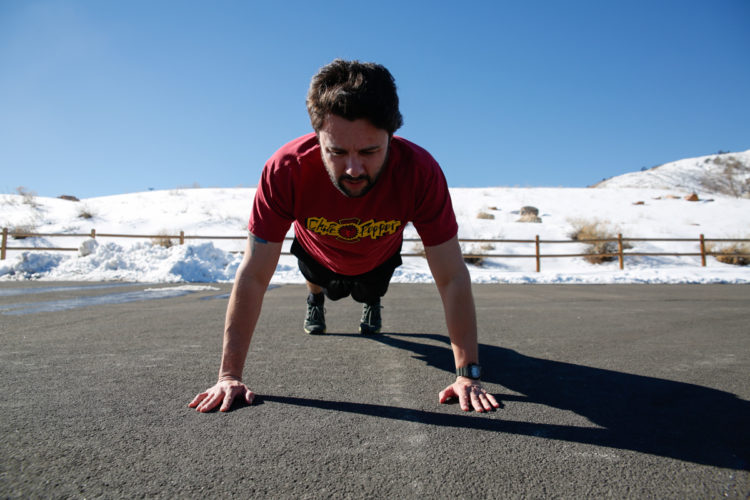 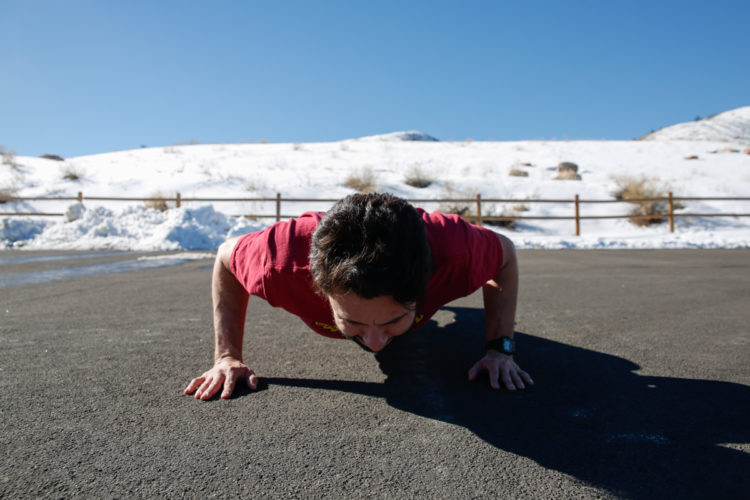 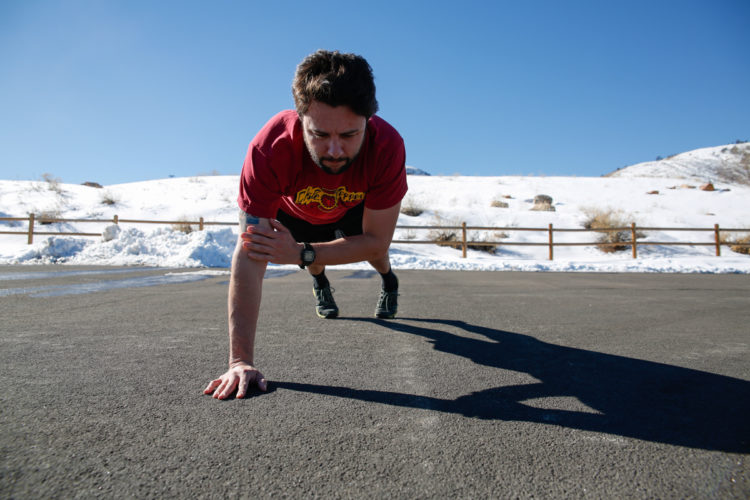 Wilson notes that when people think of the plyometric pushup, most people think of exploding up and clapping in between each rep, but it doesn’t have to be that advanced. 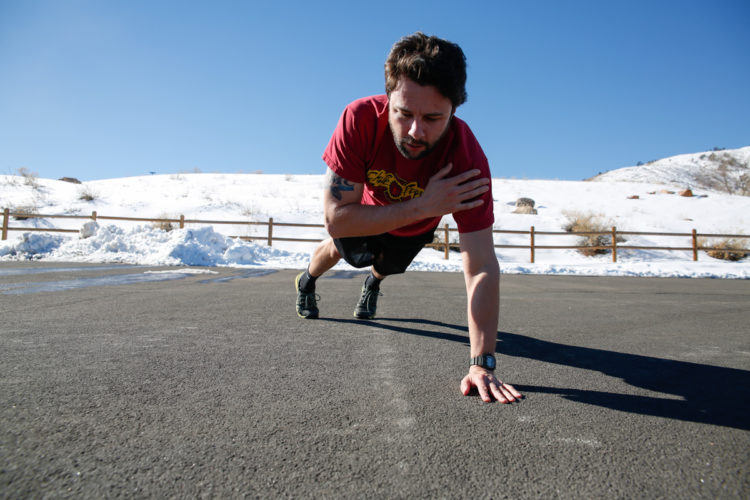 “You may never get to the point where you’re actually coming off of the ground, but you’re training the stretch-shortening cycle by handling the overload and accelerating more at the top. It’s also just a good way to work on upper body plyometric power.”

Wilson recommends a few things first, before diving into plyos head first. You should be able to perform basic squat and pushup first before adding explosiveness. Spend time learning the basics, with proper form. Start with yourself in mind, and not what World Cup athletes are doing in the gym, if you’re not at that level. A solid warm up is also important.

“If you really want to work on plyometrics and power, you want to keep the level low. Usually you’d train plyometrics early in a workout, or right after the warm up. You don’t want to do it at the end when you’re really tired from your workout. You also want to keep the reps and sets pretty low. Keeping [these] exercises around three sets and five reps would be good.”

Wilson says to pay attention to the speed of your movements. The amortization phase, or the period between the stretching and shortening of the muscles is best when it’s shorter, since the muscles will produce more power. In other words, spend less time between the reps of a plyometric exercise. If someone spends too much time in the amortization phase, the energy dissipates as heat and is lost, according to the American Council on Exercise.

“When you stop moving as explosively, that’s when you want to stop doing the exercise. It’s the speed of the movement you really have to focus on,” he says. So, when fatigue sets on, and you can’t move as quickly, wrap up the workout.

“A good workout in my mind is when you have your warmup, do some sort of power development, which plyometrics are a part of, do some strength training, do some cardio, and boom, get out of the gym so you can get on your bike and ride.”