While the riding in Colorado Springs justifiably revolves around Palmer Park, it is but one of many great trail networks in and around the city. The Springs abounds with city and regional parks and open spaces, most of which are highly-worthy mountain biking venues.  Even though they are all part of the same city and fairly close to each other, each has its own character and personality, making each one a frequent stop for local riders.  If variety is the spice of life, then the Springs is an international food court of riding opportunities.

The next most popular destination after Palmer Park is Ute Valley Park, another middle-of-the-city open space graced with diverse geography and spectacular scenery.  A popular locals destination, most tend to think of Ute Valley as a sort of Palmer Park-Lite.  It’s somewhat smaller than Palmer, has a few less miles of trail, and not quite as much highly-technical riding.

So as a sort of Palmer’s little brother, why do people love Ute Valley so much? Aside from being another place to ride, Ute has its own flavor, mostly punctuated by stretches of ledgy rock, trailside stunts galore, and tight weaving through the local pines.

For mountain bikers, the park is anchored by a single loop with occasional parallel alternate lines and a few optional interior loops. The brilliance of the layout is that there are always options at various levels of difficulty. What’s even better is that the main trail is itself high on the variety scale and is loaded with intermediate-level riding that perfectly challenges new riders to step up their game in an encouraging way, while still allowing experts to entertain themselves on more challenging lines.  Around every corner lies a new rock formation with a variety of options, from basic intermediate to total knucklehead.

Like Palmer Park, some of Ute’s tastiest lines lie off the main trails in unmarked alternate routes and social trails. Even though it’s not a large park, using trial and error will yield many trips to find most of the nooks and crannies hidden within its boundaries. Hooking up with a local can guarantee an awesome ride first time out.

As great as Ute is, it keeps getting better, as it enjoys both new trails within its original boundaries and the expansion of those boundaries. The west side of the park is framed by a dramatic white rock ridge rising above the central valley. There is a new trail traversing the ridge that provides technical challenge in front, an excellent views of the park’s central valley on one side, and even better views of the Rocky Mountains on the other. 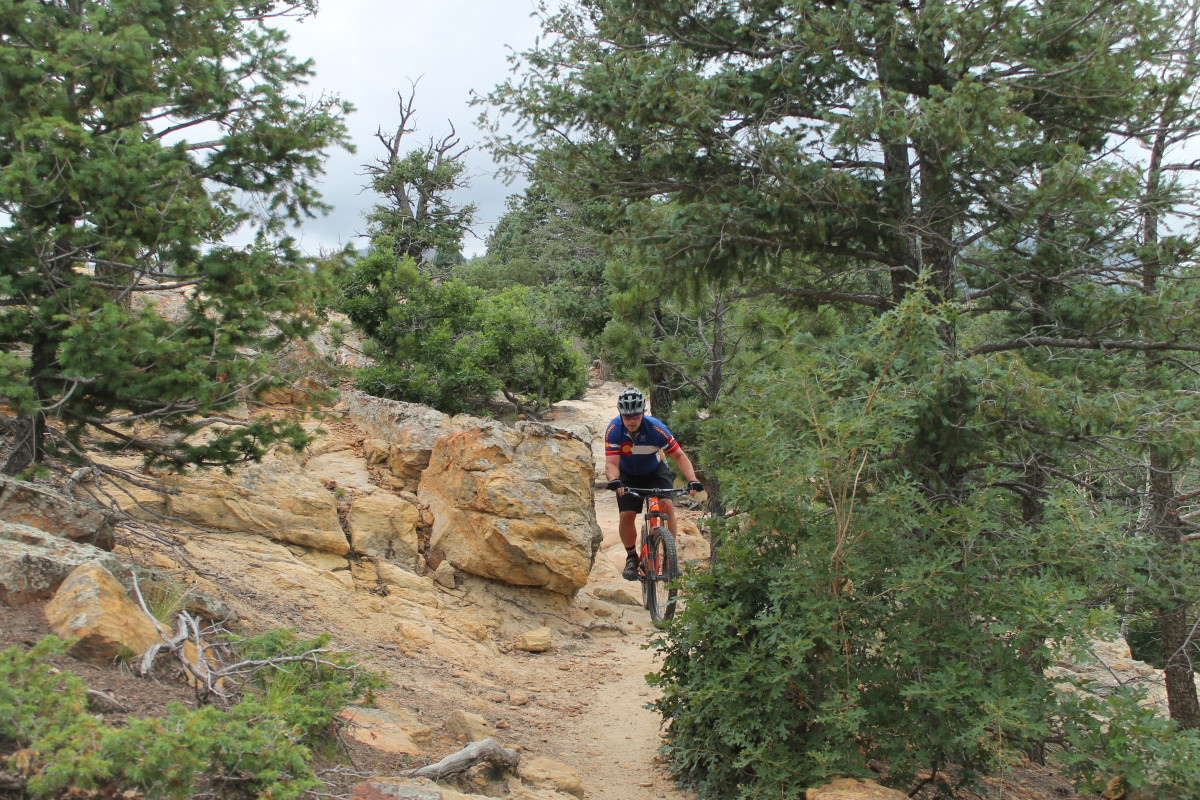 Along with maximizing use of the space within the park, newly-acquired property has added to both the quantity and the variety of trails in the park. This is a genuine urban success story that has benefited the citizens of a city already possessed of an embarrassing wealth of natural treasures.

The park sits next to some of the Springs’s tech sector and lies adjacent to a number of Hewlett Packard facilities. HP had 110 acres they were looking to divest and a developer with an approved plan ready to buy for the creation of an all-new residential area.  A local advocacy organization, The Friends of Ute Valley Park, was able to negotiate a reachable price for the property and mobilize fundraising efforts to secure the required cash, and the property is now preserved in perpetuity. The new trail in the addition has an entirely different feel from the rest of the park. As opposed to the open rock and meadows that dominate the rest of the park, it is a very cross country-style trail with light obstacles sprinkled into pine forest so tight you completely forget you’re sandwiched between industrial facilities and an interstate highway.

Colorado is blessed with a vast network of state parks, but only a few of them make for outstanding mountain biking destinations. One of the best of those is Cheyenne Mountain State Park, which sits at the foot of the mountain it’s named for, famous to most of the world as the home of the North American Aerospace Defense Command (NORAD for short), site of the movie War Games, and secret hiding place of the Stargate.  Open less than a decade, CMSP is one of Colorado’s newest state parks, and its creators put a lot of effort into making it a great venue for a variety of outdoor activities, including mountain biking.

While the bulk of the roughly 21 miles of trails are suitable for beginners or lower intermediates, there are great climbs to be had, along with some highly-technical individual trails, and stellar scenery all around.  During the original cutting of trails, the local bicycle advocacy organization, Medicine Wheel Trail Advocates, was brought in to help design and cut some trails, thus ensuring some trails were designed from the ground up with cycling in mind. Many of the other trails started out as being of little interest to cyclists as they were wide and groomed. However, as the years have passed and the trails weathered in, each trail has developed its own character, while picking up a little challenge in the process.

All of the parks trails are connected, but it’s best to think of the park as having a north half and a south half. The south half is anchored by the Sundance Trail, which circumnavigates the lower meadow and the Talon/North Talon/South Talon complex, and forms a lollipop  that climbs to the upper reaches of the park. The south half is where the heartrate monitoring types go to train. It’s big on aerobic climbing and not so big on techy trail.

The north half is a much less straightforward conglomeration of many trail segments, but it’s easy to put together loops for any level of rider. For an advanced rider, any loop incorporating both the Medicine Wheel (best ridden downhill) trail and the Cougar’s Shadow Trail (best ridden from north to south) is bound to please. Add in the Blackmer Loop, especially if done counterclockwise to maximize the mostly-buff but twisty and banked downhill, and there’s a hoot’n’, holler’n’ good time to be had!

Park entry is $7 (or $70 for an annual pass), and well-worth it. CMSP also has many reasonably-priced campsites, all adjacent to the trails. It is also home to a very dense and highly-varied collection of wildlife. The lower area is prairie dog heaven (and subsequently the residence for some rather sizable western rattlesnakes). Up higher, the rodents and reptiles give way to more attractive fauna. While riding in the park I have seen mule deer, coyote, red fox, bobcat, black bear, and more wild turkeys than I could count.  While I fortunately haven’t seen the mountain lions up close and personal, I have seen the signs of their presence. 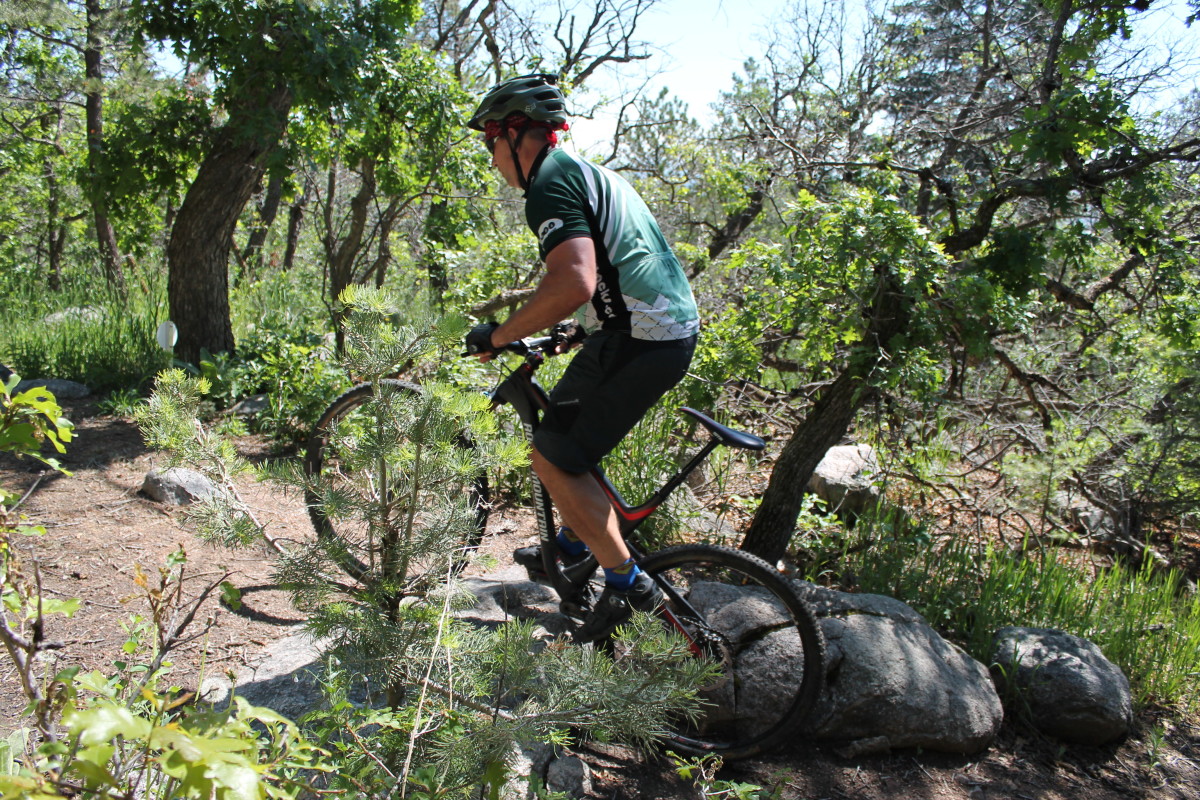 CMSP sits just off the southwest corner of the city. For a tasty handmade, brick oven pizza, head for Duca’s Neapolitan Pizza.  For the best brew, make for the old Ivywild School. This was an operating elementary school for the better part of a century, opening up in 1916 and decommissioned in 2009. After gathering dust for a few years, local businessmen purchased the property and turned it into a small retail center, which now houses the most excellent Bristol Brewery, serving up the best local brew in the Springs.  There’s also something deliciously rebellious about sitting in an old school and slurping suds.

Culture
Singletracks Best Reads: June 2022
Gear
The We Are One Arrival Is a Mid-Travel Bike With...
Gear
Enduro Deals & Early July 4th Sales
Trails
An Intro to Bikerafting: How it Works, and How to...
Subscribe
Login
Please login to comment
2 Comments
Most Voted
Newest Oldest
Inline Feedbacks
View all comments

Awesome to hear that Ute Valley has been expanded! I always enjoyed riding there but was always left wanting more mileage…