One of my informal goals for the 2014 season has been to ride at least one chunk of new-to-me dirt every single week. Since I’m still relatively new to Salida, that’s been pretty easy with such a wealth of incredible singletrack so close to home! However, as I ride more and more of the easily-accessible trails, it takes work to find an untouched segment of trail.

Canyon Creek had been on my wishlist for a long time, so one Saturday I decided to make the drive up and over the Continental Divide to the beginning of the route at the Snowblind Campground, located between the small town of Sargents and the ghost town of White Pine.

This loop ride began like most other big Colorado loop rides: with a long climb. I pedaled my way on up the Tomichi Pass 4×4 Road, passing through the town of White Pine and past the run-down Tomichi Cemetary. The climb was long and arduous (and I started hiking on some of the steep, loose sections up high), but the scenery was classic Colorado: gorgeous.

Right at tree line, just shy of reaching the top of Tomichi Pass, the singletrack peeled off to the left and kept on a-climbing. This entire singletrack is motorcycle-legal, so thanks to the throttles and the steep grade of the trail, the next couple of miles were steep, rocky, washed-out, and 100% hike-a-bike. Despite the miles of hiking, I absolutely loved this portion of trail! Entirely above treeline, my head was on a swivel as I gawked at the spectacular mountain views around every corner. 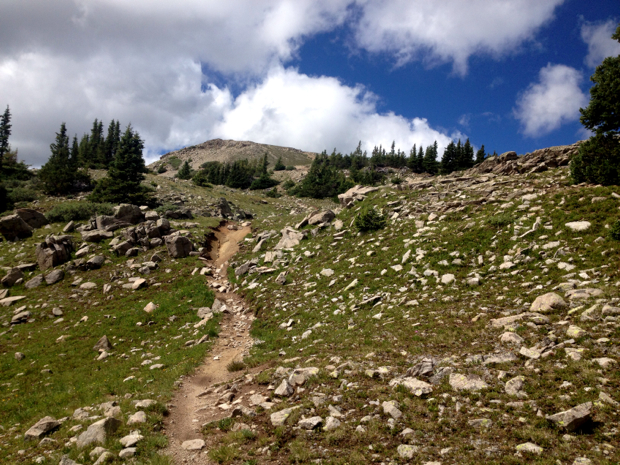 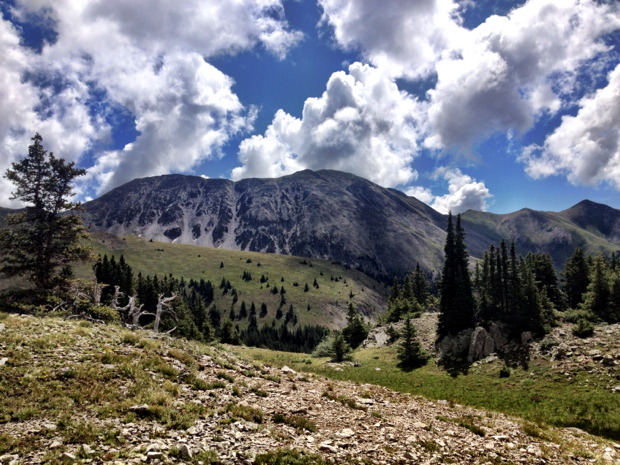 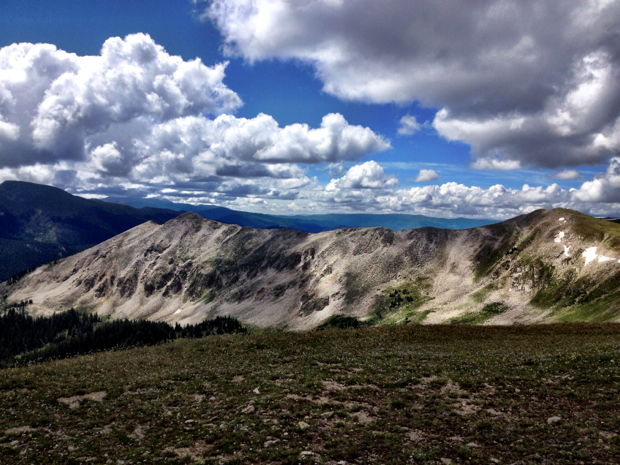 Eventually I made the summit. Topping out at 12,581 feet, it was officially the highest I’d ever ridden my mountain bike! And getting there was no joke, either: I had climbed all the way up, under my own power, from a mere 9,280 feet: a net elevation gain of 3,300!

The view from the top was fantastic, and luckily I bumped into a fellow rider who was willingly to snap some photos:

Finally, it was time to drop into the descent! The first couple of miles were beautiful high-alpine traversing and descending with–you guessed it–even more gorgeous views: 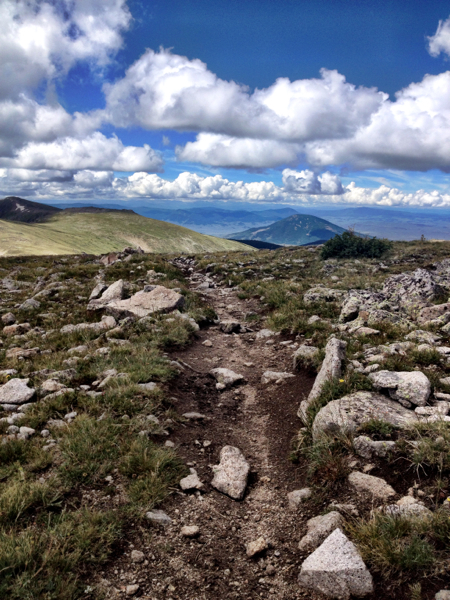 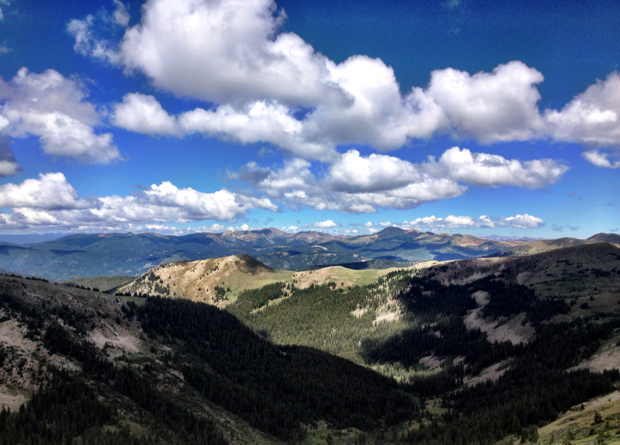 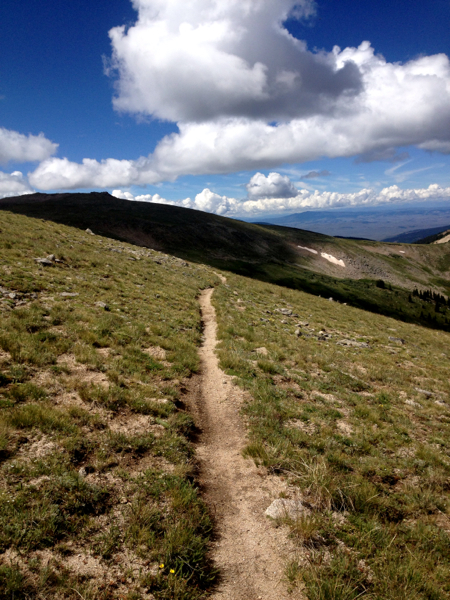 After a couple miles of truly surreal mountain biking, the singletrack dipped down into the trees–and that’s when things got hairy.

The trail tumbled and dropped through chunky rock gardens, water bars, drops, jumps, on loamy black dirt reminiscent of Montana. I love descending technical motorcycle-legal trails because they often have more roots and rocks, and are straight, wide open, and stupid-fast! The one thing I don’t necessarily enjoy are the deep mud holes, like the 3-foot-deep one that I unwittingly sunk myself and my bike into. Eh, it was good to get thoroughly dirty at the top, because there was plenty more muck coming up! 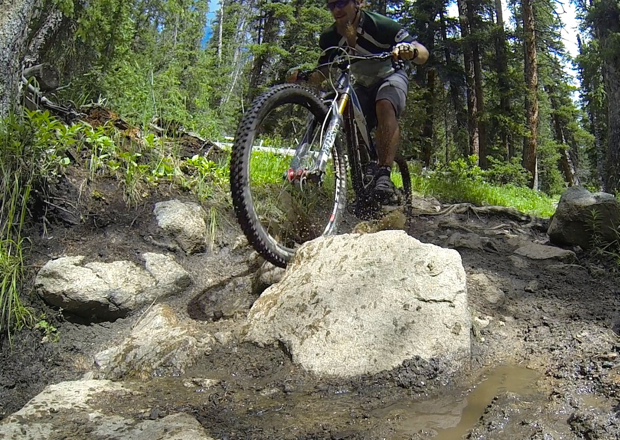 Unlike the Green’s Creek trail, which has a similar feel at the top, the Canyon Creek descent mellowed as it got lower down the mountain. The trail continued to drop, but it rolled and swooped, with mini berms, rollers, and pumptrack-esque sections that were an absolute riot! The lower I descended, the dryer the soil got as well, eventually turning into the decomposed granite/gravel that I always think of as Classic Colorado.

Even after the trail had mellowed, there was still the occasional rock garden to liven things up, including some sandy, dry rocks reminiscent of Palmer Park in Colorado Springs. After one last little hike a bike, I finished the last section of descending and popped out back at my truck.

All told, this loop was almost exactly 20 miles, with the amount of climbing and descending split almost perfectly. While the climb was heinously difficult, this nearly 10-mile descent was so entertaining and so varied that I would gladly do this ride again in a heartbeat!

I’ve ridden quite a few amazing trails, so it’s hard to say exactly where it ranks, but I think Canyon Creek is one of the best trails I’ve ever ridden, bar none.

Check it out for yourself!

That looks like a great ride! I am sure it took you hours…I’d love to see that sometime

Yeah it’s a pretty superb ride! If you’re ever planning to hit it up, just let me know! There are additional variations off of it too, that I’m hoping to hit next year.

“I would gladly do this ride again in a heartbeat!”

Or a few tens of thousands of heartbeats — altitude, climbing, steep grades, etc!

Looks stellar–top o’ my wish list for next summer.

Lol yeah, my heart was beating pretty dang fast on that climb to the top!