This 2014 weekend getaway to Steamboat was my second bout of exploration in the area. Last year, easily the best ride I did in the region–and one of the best rides of my entire month-long summer road trip–began at Rabbit Ears Pass, traversed the Continental Divide Trail (known as the Wyoming Trail in these parts), and then dropped down Mountain View trail into the ski resort.

However, that ride covered only a fraction of the trails available in the area. That shuttle route has a mirror image on the map, and I was eager to explore it. The mirror image route begins at the top of Buffalo Pass, traverses south along the Continental Divide to the same turn off I had taken last year, and finally the Fish Creek Falls trail provides a totally different ride down the mountain and into town.

Saturday morning I talked my lovely wife into shuttling me to the top of Buffalo Pass. While the drive up to the top of Rabbit Ears pass is extremely convenient via the highway, Buffalo Pass is entirely different. The long drive to the top is all dirt road, and is rated as 4×4 road for most of the way. While I was able to make it to the top in my 2wd pickup, the rocks and potholes make the drive slow going, and a vehicle with at least moderate clearance is required. This ride took place at the end of September, and it turned out that even the drive to the top of the mountain was a popular choice: the aspen leaves were peaking, and Buffalo Pass road runs through some large aspen groves, providing breathtaking views of the nearby mountain sides and the valley below. There were dozens of leaf peepers driving up the mountain, stopping to take in the sights.

At the 10,295ft pass, I began my pedal. I wasn’t sure what this section of the CDT would have in store for me: my older map rated this section of trail as singletrack, and a new map I had acquired just that weekend rated it as 4×4 road. In fact, it turned out that neither were correct: this section of trail all the way to the junction with Fish Creek Falls was, in fact, motorized doubletrack. It wasn’t open to jeeps, though: the largest vehicles allowed were ATVs, and it’s popular with dirt bikes as well. 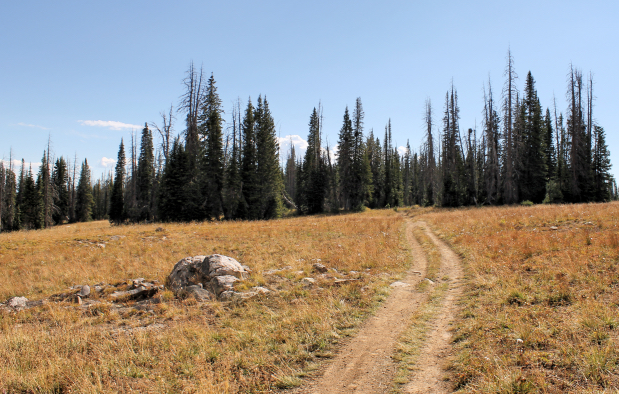 Despite being a doubletrack trail, this section of the CDT was a beautiful rolling ride through gorgeous terrain! Compared to the sharp, rugged peaks above my hometown of Salida, the mountains above Steamboat are radically different. Instead of a sharp ridgeline, this 10,000ft+ mountain top is a wide, mostly-level plateau. On either side the mountains drop down sharply, but along the top, which is a couple of miles wide, you’ll find rolling meadows, wetlands, and pine forests. As I rolled along the mountain tops, I soaked in the beautiful weather, varied terrain and the unique riding experience that Steamboat was offering me seemingly on a silver platter. Despite being a rutted doubletrack, I saw quite a few other trail users on this Saturday morning: hikers, dirt bikers, and mountain bikers alike. Apparently I was in the right place! 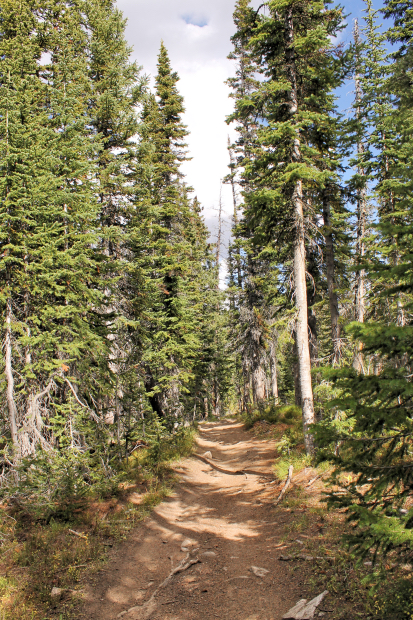 At the turnoff to the Fish Creek Falls trail, I left the doubletrack behind and jumped onto sweet, sweet singletrack. The upper portion of the Fish Creek Falls Trail (FCFT, for short) traversed across the flat mountain plateau for several miles, passing Long Lake and a number of rock formations. Then suddenly, the trail began to drop. 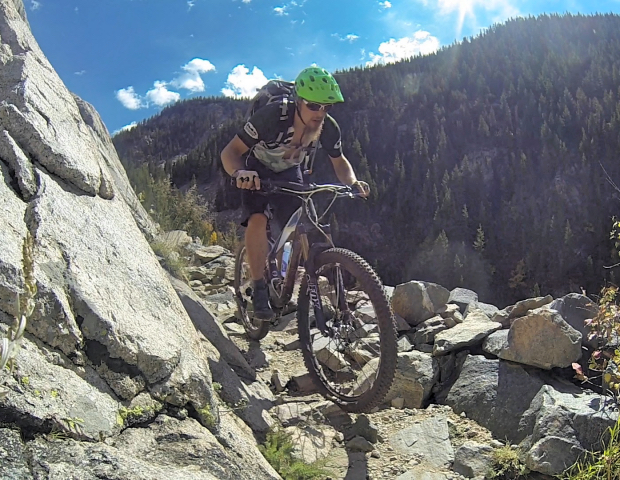 The further the trail dropped, the more the views improved. I passed the upper waterfall at the beginning of the descent, which plunged the creek into the bottom of the ravine. At this point the trail clung to the mountainside above the creek; I stopped multiple times just to snap some landscape shots.

Quick clip: playing in the rocks before the trail got too crowded. The rowdiest features were lower down the trail, but by that point it would have been too complicated to try to setup a shot with all the hikers passing by.

While the singletrack was ridiculously entertaining and the views were gorgeous, after a while I wasn’t really able to enjoy the experience. What I didn’t know before dropping down this trail from the top is that, while it is indeed bike-legal, the FCFT is one of the most popular hikes in Steamboat Springs. The further I descended, the more hikers I saw. Eventually, I reached the point where I was stopping–quite literally–at least every 30 seconds, and sometimes for minutes at a time as I waited for streams of hikers to slowly ascend the hill. The lower I descended, the more I realized the error of my ways. There were hundreds of people hiking up this trail! When I finally passed the lower falls and hit the pavement, the overflowing parking lot with cars parked along the sides of the road for about a mile showed me how ridiculously-popular this trail was. 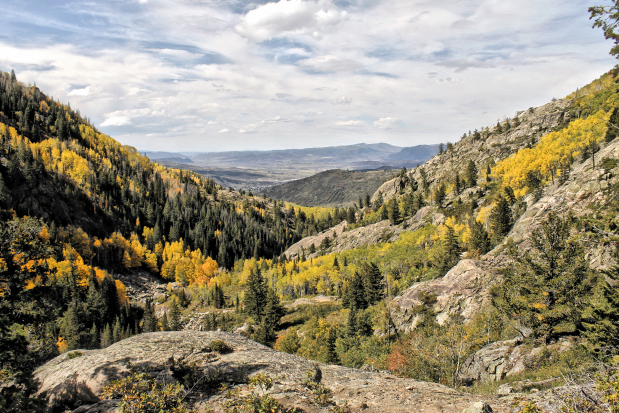 Really, the popularity is a bit of a shame, because FCFT is such a fantastic ride! And while I would recommend that every mountain biker who enjoys old school technical singletrack ride it, I’d only do so with a few qualifications. 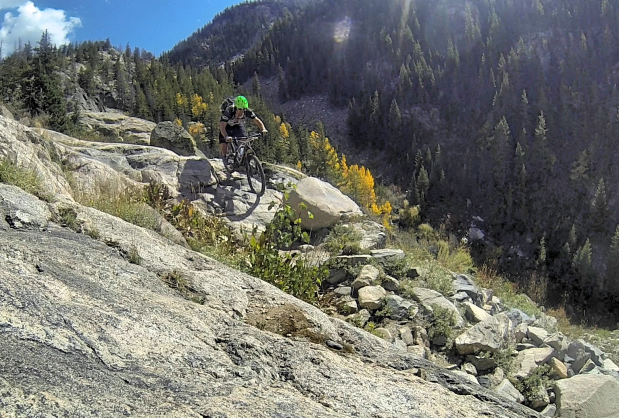 First, only attempt this trail during a weekday. If you’re here on vacation, you can make it happen–but since Steamboat is such a tourist destination, there will undoubtedly still be plenty of other trail users. Second, if you can ride this trail on a day when the weather isn’t ideal, you’re more likely to have it to yourself. Day hikers are fickle at best–and calling most of the people I saw on that trail “hikers” is a disservice to true foot-powered adventurers everywhere. If the clouds were looming overhead, the temps a bit chillier, and it were a week day, that would be the time to ride FCF. I made the mistake of riding it on the weekend, on one of the last beautiful days of the season, with warm temperatures, and the fall leaves peaking. Learn from my mistakes!

At the end of the day, I was glad to have ridden this route and checked it off my list. However, if you have to make a choice between shuttling from Rabbit Ears or from Buffalo Pass, there is no choice: the Rabbit Ears shuttle, detailed here, is still hands-down one of the best mountain bike rides I’ve ever done. So do it.

But if you’re looking for some variety, be sure to keep Buffalo Pass to Fish Creek Falls in mind!

With a population of over 12,000, Steamboat Springs offers many more amenities than the average mountain bike destination tucked away deep in the mountains. With a wide variety of restaurants, Steamboat is guaranteed to have at least several that fit both your palate and your wallet. One of the establishments we investigated on our recent trip was the Old Town Pub.

An authentic wild west interior, thanks to the restaurant’s origin date of 1904, kept our western experience going in full-force. The Pub serves a variety of classic dishes, including steaks, barbecue, and burgers–all at reasonable prices. There are a few original dishes on the menu as well, so if you’re feeling adventurous, the Old Town Pub can satiate you too. A respectably-long beer menu gives you a variety of options to choose from, including plenty of local brews.

Speaking of which, the beer scene in Steamboat is expanding rapidly–like everywhere in Colorado, for that matter. Still, if you want an authentic brewery experience, the small town of Steamboat has several options to choose from. Butcherknife Brewing Company is one of the newest hotspots in town.