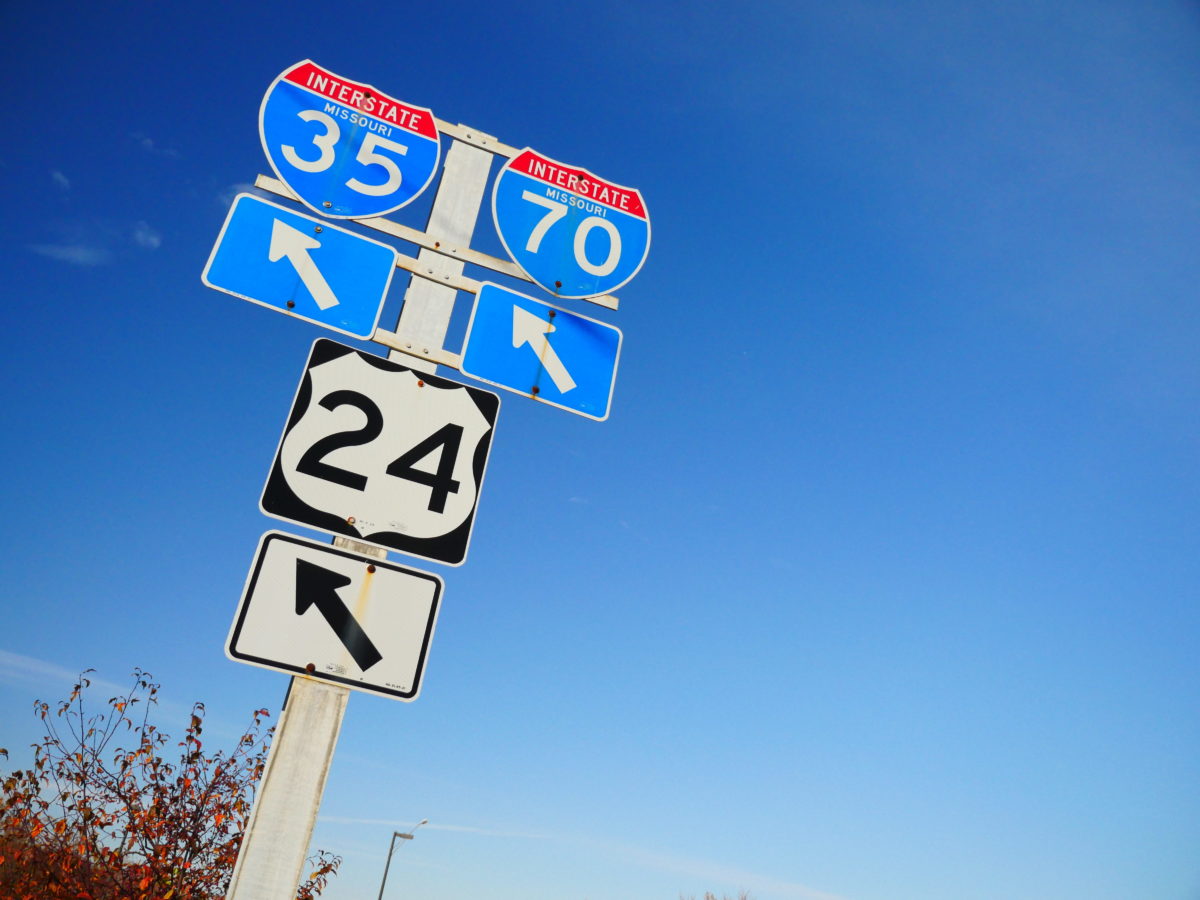 There are more than 4.1 million miles of pavement and gravel roads in the United States.

They crisscross the country like a dense network of arteries and veins pulsing with the movement of man and machine. Of those, over 2,100 miles belong to I-70, one of the busiest roadways in the country.

Chances are you’ve been on all or parts of it… maybe even a few times.

My own reckoning with I-70 dates back further than I care to recall. Being smack dab in the middle of the country, it has long been the hellish, mind-numbing wall I must scale to have a crack at the mountains I cherish.

I have no love for this highway. None.

But something happened last summer as I traveled from Pittsburgh to Moab. I was on a mission to find a way to not, I repeat, NOT blast through the cornfields, pastures, and billboards as quickly as humanly and legally possible. Instead, I wanted to find a way to actually like traveling I-70 (except that part outside of Denver all the way down beyond Glenwood Springs and a few places in Utah… I already like those parts).

I did it by finding unexpectedly good trails along the way that could not only break up the drive, but have me looking forward to getting back out on the road again.

For my journey, the criteria were simple:

Some of you will wonder why I didn’t feature certain trails. Those include a number in the Midwest and back East, but in particular, great stops in Colorado and Utah. At least for those two obvious choices, the stops are often destinations unto themselves. Instead, I wanted to look at locations that would help break up an otherwise monotonous drive with some unforeseen yet tasty singletrack.

Here then, are seven rides that rock along I-70.

MoMBA, which sounds like mamba, does tend to twist and turn like a writhing snake in the Ohio forests. However, it isn’t named after the sub-Saharan serpent. It is actually an acronym for MetroParks Mountain Bike Area.

Whatever you call it, it’s worth a stop. MoMBA features close to nine miles covering some basic beginner-friendly sections and moves upward in difficulty as you get further back into the park.

Climbing is almost non-existent, but that doesn’t mean you won’t have to clock in and get to work. Or have an opportunity to dial up some speed. On Creekside you’ll find fast trails that dip into and out of creeks. Hit Upper/Lower Stealth to roller coaster along on some flow. And my personal favorite, Hawk’s Lair, is a more technical trail littered with exposed rock, some step ups, lots of chunky cobbles, and limestone ridges to navigate.

Parking, bathrooms, and rentals (Saturdays only) are available right by the trailhead.

In Indiana, Brown County State Park gets all the love. On Singletracks, it’s the highest-rated trail in the state of Indiana, and that rating is supported by the gushing accolades of people who know mountain biking in Indiana.

At The Fort you’ll find 10 miles of purpose-built trail in three loops. The beginner loop has very modest grades and a little side slope. The intermediate loop is about 4 miles and gets into more flowing trail, and has plenty of contour that dives into some deep ravines. The advanced loop is a bit shorter than the intermediate and features bigger exposure, log overs, more climbing, berms and downhills, creek crossings, and steep side slopes. As Mike says, “It’s feature-rich.”

Griffin Bike Park (GBP) is named in honor of Sgt. Dale R. Griffin, a Terra Haute local who was an avid mountain biker. Sadly, in 2009, Dale gave his life while serving his country in Afghanistan.

His mother, father, and two brothers turned their enormous loss into enough energy to move mountains of dirt. They’ve not only honored Dale (and all veterans) in a way he would have surely appreciated, they’ve brought a much-needed shot of recreation and increased bike culture to Terra Haute.

Working hand in hand with the Vigo Country Parks and Recreation Department, the Griffin family and their army of volunteers have built something that has to be seen – and ridden – to be believed.

There’s a jump line (several, in fact), a pump track, a dual slalom course, a kid’s zone, and cross country trails. If you’re just trying to turn the legs during a quick stop, it could be a problem. There’s enough at GBP to keep you busy and smiling for a couple of days. 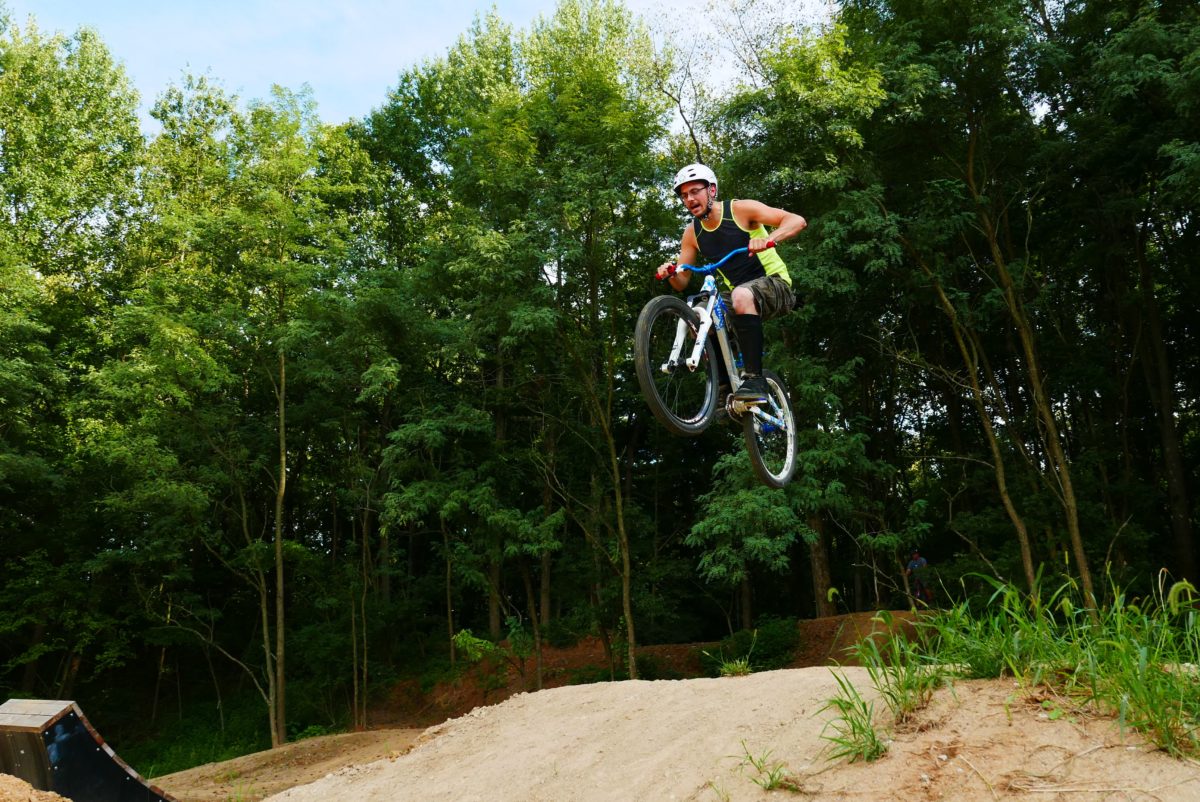 While you’ll find a few rocks scattered here and there on Griffin’s 15 miles of singletrack, none are hugely technical. Rather, trails get progressively more steep and tight as they go from beginner to advanced. You’ll find tons of flow, some rollers, tight turns, as well as a couple of hills that, chances are, will grind your legs to a halt.  And just for giggles, a floating pontoon bridge crossing Stryker Lake. Trust me, it’s going to freak you out.

For a good all-purpose ride, do the XC race loop. Perfect for mixing in a bit of everything Griffin has to offer. And make sure to ride Mega Pump. Imagine a pump track on steroids where you crest a hill only to rocket down 30, maybe 40 feet, then shoot nearly straight back up again. You’ll get a heaping dose of gravity at the bottom… and laugh like a hyena.

GBP features long, nicely-carved bench cuts, curling switchbacks, flowing goodness that twists through the trees, and a great setting. Hats off to the Griffin family, the volunteers, and the local parks and rec folks. They have invested an enormous amount of heart and soul into this project, and it shows. I’m sure Dale would be proud.

Click below for 4 more great mountain bike stops along I-70.

Gear
The Deal on this Ibis Trail Bike is Good AF
Trails
Tennessee's Smoky Mountains are Full of Good Trails and Good...
Gear
How to Find the Best Prices on MTBs and Gear,...
Trails
The 12 Best Mountain Bike Destinations in the USA [2022]
Subscribe
Login
Please login to comment
1 Comment
Most Voted
Newest Oldest
Inline Feedbacks
View all comments

Hi Patrick and David, I can’t respond directly on Facebook since I don’t have a personal Facebook page so I thought I’d respond here for everyone’s benefit because this is good information.

Patrick, hopefully you saw that I mentioned Swope in the story. When I rode Swope New Year’s day I drove over from my house, which is nine miles away. It took 25 minutes. I suspect that going by highway would get you in under the 20 minutes limit I set. But I decided to exclude it in favor of Landahl for two reasons. For starters, more mileage at Landahl. Secondly, it can be more complicated to get to Swope. And since we only had so many words, something had to be left out.

David, you must drive a lot faster than I do. Coming from the Lawrence side, I jumped off I-70 and went directly to Perry recently (and got to hang out with Lyle again). It took me more than 20 minutes to get there. Perry is outstanding and John Fisch just mentioned it as one of the places he really likes as well as Swope. You can read his article here: http://www.singletracks.com/blog/mtb-trails/my-10-best-trail-discoveries-of-2016/