Just down the road a few miles from Terra Haute is another trail system that lives in honor of a person who held a special place in people’s hearts.

Her name was Fay Pickering.

Her son, Josh, had been building these trails with other volunteers when his mother died of a heart attack. When the community began trying to find the right name for the trails, it seemed obvious to name them after Fay. She was, after all, someone who was widely known in the community and someone many people looked up to and adored. 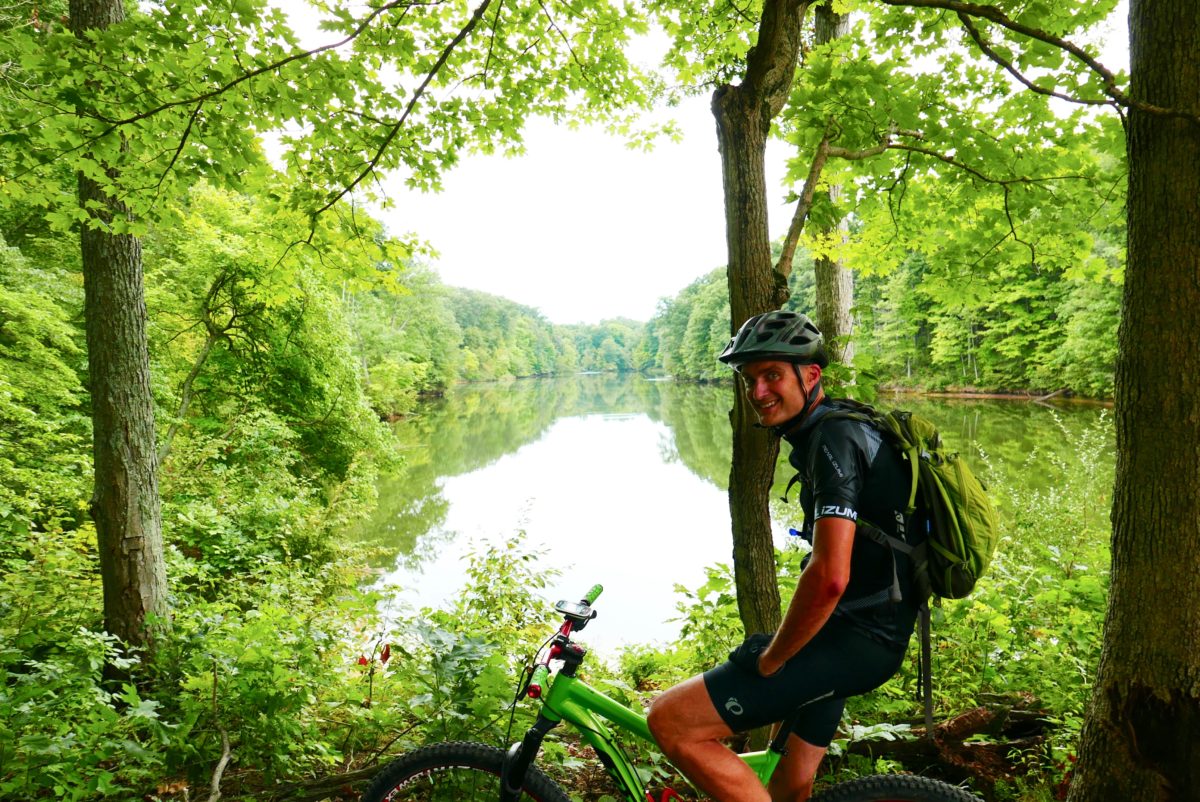 What you’ll find at Fay is trail that flows like crazy through the old-growth forest. As I first wrote in a review here on Singletracks, you’ll feel like Fay is a beginner trail. Soon, you’ll be disabused of that notion as the trail turns downward, fast, then chugs back up hills that seem like they belong anywhere but Illinois. You’ll twist, turn and fly into bench cuts hung like rails from the sides of steep slopes. The faster you go, the harder it gets. And just when you think it’s all smooth and fast, you’ll hit a technical section that will surprise you. If you’re not careful, it’ll send you into the woods where you’ll confront a handful of trees and a quick, painful stop.

Fay is just down the road from Griffin, but plan on hitting both if you can. Definitely a double scoop of trail goodness you’ll remember for years.

Home to a number of 24-hour events, including a stop on a national points series tour, Landahl is a Midwestern wonder that can bring the pleasure and the pain. It is located in a suburb of Kansas City, Missouri, maybe 20 minutes from downtown KC and roughly 15 minutes from I-70.

Full disclosure: this is a trail I have ridden, raced, and loved for more than two decades.

Landahl has some good, fast, flowy sections that rail through the trees. Anyone from a newbie to a serious racer can enjoy them with a mile-wide grin. On Will’s Wanderer or Tasty Goodness, for instance, you’ll find smooth, arcing trail that drifts through Missouri hardwoods. There are a few rocky interruptions, some scattered roots, and a tight tree or two, but you can rip on either all day long.

But Landahl can also punch you in the throat. 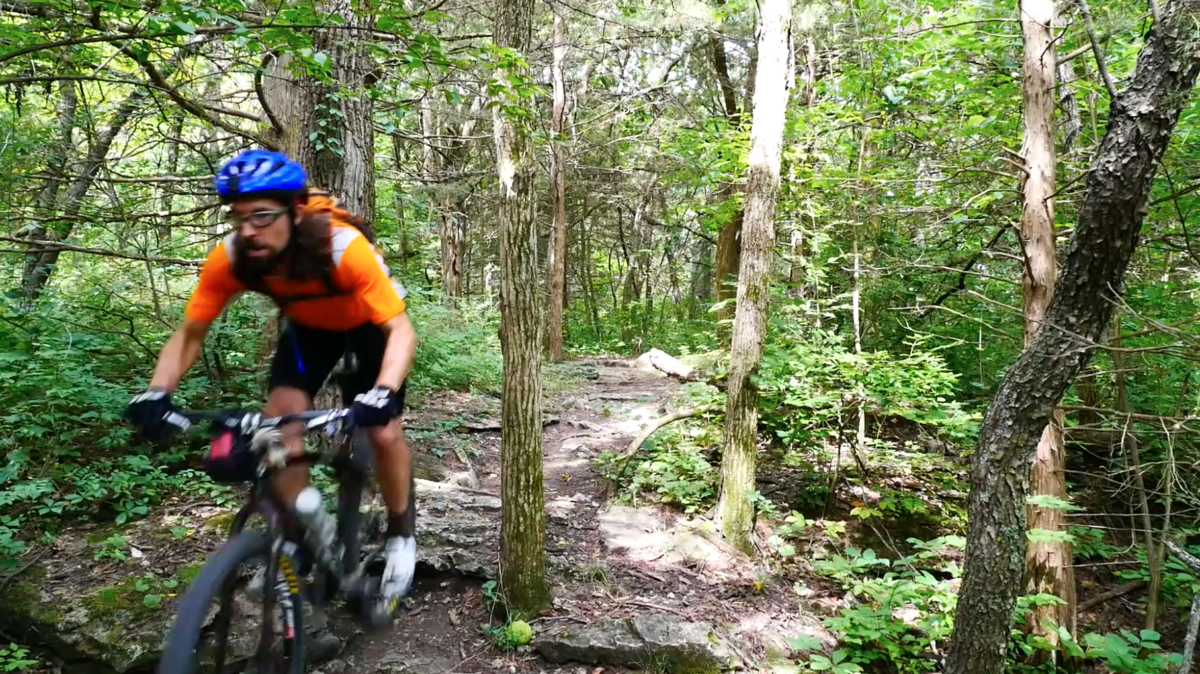 Trails like Rim, Swedish, 10, and 11 (as in this one goes to) will keep you trying to figure out how to handle a steep step down and 180-degree switchback at the same time, only to reward you with a rock-strewn uphill with enough choppy limestone jutting upward to stop you dead in our tracks. Or indiscriminately pitch you over the bars as you try to grunt your way through it.

One of my all-time favorites is the Rim Trail. It has enough flow to help you open up the afterburners. Yet it will bring you screeching into a twisty, jerky rock section, root-covered turn, or staggered step up (or all three). And if you’re not on your game, you’ll be on the ground.

Elevation here isn’t much. But don’t expect to get off easy. The trail designers use the land to maximum benefit so you’ll be working constantly. Rinse and repeat for 18 miles and you’ll feel like you’ve been in a fight. And you’ll love every minute of it.

Special note: There are other gems in the Kansas City area that aren’t far from I-70. Swope Trails come to mind. And they are spectacular; however, it is more complex to get there so they’ve been excluded this time.

Just about 40 minutes from Kansas City on the edge of Lawrence, Kansas, is where you’ll find Clinton Lake, a 25-mile trail that has a lot in common with Dr. Jekyll and Mr. Hyde.

There are primarily two trails at Clinton. The blue and the white. The white trail is like being attacked by a ninja. The blows, in this case, rocks and roots, seem relentless and come at you from every direction. The trail dips and rises regularly, sometimes abruptly, and will have you popping up and over obstacles while doing so. Turns are, at times, very tight, squeezing through narrow trees intent on snapping a pinky like dry kindling.

It is a beautiful, tough ballet. If you’re having a good day, the white trail will amaze. If you’re not, ahem, carnage to body and bike are common.

The blue trail, by contrast, is still rocky but not nearly as relentless. It flows in large chunks, punctuated by less difficult technical obstacles and much less frequent, shorter climbs. It is the kinder, gentler Dr. Jekyll to white’s Mr. Hyde.

There is one other trail at Clinton that you’ll find about halfway through. It’s called, simply, the red trail. Maybe, I’m thinking, because red is the color of blood.

It has very technical rock features and some very narrow – and often eroded – bench cut into the precipitous hillside. This trail is along the shore and prone to flooding during the rainy season, so it’s often in disrepair. But when it’s intact, you’ll find it a slow-motion, delicate cage match through some highly-sketchy sections, over teetering rocks, and threaded through some bar-grabbing narrow sections. The red trail takes heaps of concentration and slow-speed handling to survive. Parts of it are difficult just to walk.

If I’ve made Clinton sound tough, that’s because it is. In a good way.

Way out in the prairie, where the wind really does blow – a lot – you’ll find a trail that doesn’t look like it belongs.

Welcome to the Switchgrass Trail, perhaps the most unexpected of them all.

Roughly four hours from Kansas City and eight miles from I-70, you’ll find Lake Wilson, an oasis in central Kansas surrounded by a 22-mile stacked loop that swoops up and down through the Kansas prairie grass.

Most of the singletrack here is easy to moderate, sometimes punctuated by short, rocky sections that feature step ups, ledges, and a few close calls with the lake down below. You’ll sometimes have to wallow through some sand and find some pretty sharp, short climbs, but for the most part you’ll find plenty of flow that helps you rail at speed.

You’ll be asking yourself if you’re in Kansas. Repeatedly. Just bring provisions if you plan to stay overnight. There’s not much in the way of towns or places to grab your favorite post-ride beer out there. Part of the charm…

What Are You Waiting For?

Okay, so now you know. Instead of rushing down I-70 at break-neck speed, blindly flying through the country to get to your destination as quickly as possible, you can take your time and stretch your legs the right way. In fact, what you should do is build in a few extra days if you can, and explore. As I’ve discovered, you might be surprised at what you find. Not just great trail, but great people willing to show you around, share a beer with you, and generally make your time on the road much more enjoyable.

Hi Patrick and David, I can’t respond directly on Facebook since I don’t have a personal Facebook page so I thought I’d respond here for everyone’s benefit because this is good information.

Patrick, hopefully you saw that I mentioned Swope in the story. When I rode Swope New Year’s day I drove over from my house, which is nine miles away. It took 25 minutes. I suspect that going by highway would get you in under the 20 minutes limit I set. But I decided to exclude it in favor of Landahl for two reasons. For starters, more mileage at Landahl. Secondly, it can be more complicated to get to Swope. And since we only had so many words, something had to be left out.

David, you must drive a lot faster than I do. Coming from the Lawrence side, I jumped off I-70 and went directly to Perry recently (and got to hang out with Lyle again). It took me more than 20 minutes to get there. Perry is outstanding and John Fisch just mentioned it as one of the places he really likes as well as Swope. You can read his article here: http://www.singletracks.com/blog/mtb-trails/my-10-best-trail-discoveries-of-2016/