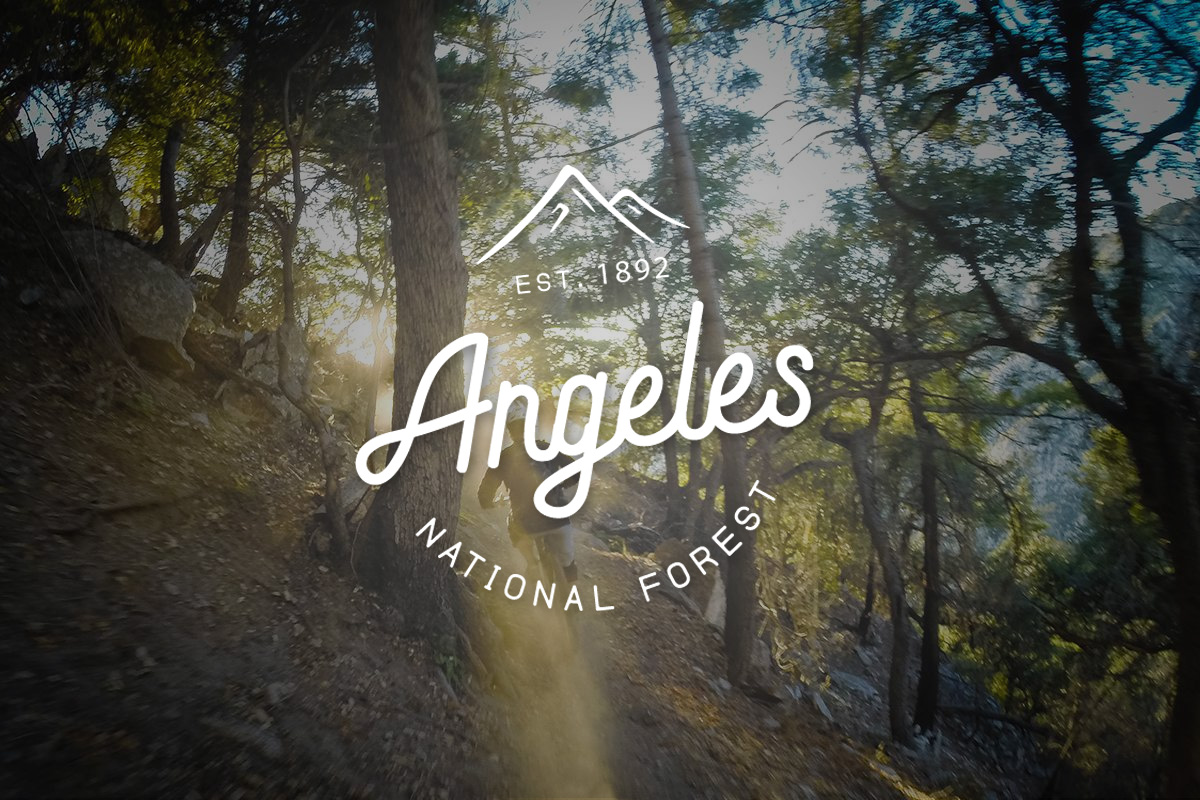 With a metro population approaching a whopping 20 million people and a vibe that’s more Baywatch than fat tire, few think of Los Angeles as a destination for mountain bikers. But while most Angelinos and virtually all visitors look south and west to the beaches, fat tire fiends look to the north and east, where the San Gabriel Mountains and Sierra Pelona Mountains, covered by the Angeles National Forest, beckon dirt lovers to climb and shred.

The 655,000 acre Angeles National Forest is comprised of four ranger districts in two geographically separated parcels. The larger parcel, which sits east of Interstate 5, encompasses the San Gabriels and includes the Los Angeles River, San Gabriel River, and Mojave Rivers Ranger Districts. The smaller parcel, lying to the west of I-5, covers the east Sierra Pelona Mountains, and is administered by the Santa Clara Ranger District.  Being so close to the ocean, the Angeles Forest base begins at a modest 1,200 feet above sea level. However, the rise is dramatic and the high point, Mt. San Antonio (aka Mount Baldy) rises to over 10,000 feet, giving the forest an impressive amount of vertical relief which, of course, makes for some killer shredding.

Here’s your guide to putting the smile back on your face when you’ve had enough smog.

The Top 10 Mountain Bike Trails in the Angeles National Forest

Let’s just go ahead and start big. Like almost a mile of vertical descent big. You’ll need a shuttle, and you’ll probably dismount a time or two, but when you’re done, you’ll have another monster epic under your belt.

“I’ve been hearing rumblings for a while now about some pretty good singletrack just outside of Los Angeles. 5,000 feet of descending? Mountains in LA? I had to see it for myself. It turns out the mountain biking on Mt. Wilson IS epic. So epic I had to cut this ride into two videos!” -BKXC

El Prieto gets lush by SoCal standards. It mixes in greenery with top-quality singletrack, ranging from smooth to gnarly. This is an excellent ride for both fun and variety.

“Lower El Prieto is unlike any other trail that I’ve ridden in So Cal. It’s gnarly, and mostly descends, but there are some smooth spots mixed in, some climbs thrown in, a few well-shaped switchbacks–the singletrack is a really mixed bag. But what really sets it apart is that El Prieto winds down through a canyon bottom, following a small stream. As a result of the water flow, there is actually vegetation: trees, green grasses (not dryed-out brown stalks), and many other types of undergrowth. The trail actually crosses the small stream several times, the cool spray of the water and the shade of the trees a refreshing relief from the hot sun higher up the trail.” -Greg Heil

Whether done as a physically-ambitious loop or a rockin’ shuttle, the Gabrielino Trail will challenge most riders with its rocks and exposure. This is a classic San Gabriels ride.

“Today, 1/17/09, was my first ever downhill ride. This trail was awsome. I can’t wait to go back. [I took the] 6am shuttle to the top for $10. Money well spent. I rode my Jamis Dakar down it. It is set up for XC and I had no serious problems.” -Jamis-Junkie

The Mt. Lowe Railway is the local stairway to heaven. The grade is moderate as railroad grades are, and the old tunnels are still a part of the ride. Once up high, excellent singletrack awaits for a trip back down. Alternatively, you can also grab a shuttle to the top of this network of trails too.

“The grind to the top is worth spinning. The network of singletracks are a mountain biker’s dream. Make sure you check out the echo phone and stop to read the history of the trail as you go up.” -Daniel Lim, Jr.

This is a moderate ride in length, but it will throw a lot at you. You’ll climb, you’ll descend, you’ll maneuver rocks, and you’ll smile… a lot.

“Oh my, what a trail. This is a raw, untrammeled bit of goodness that requires your full attention as it is narrow, steep, and often quite brushy. It is not a fast ripper trail per se, but it does have its moments.” –MountainBikeBill

Want to get further away from the city? The Golden Eagle Trail is the most remote selection on the list and your best chance of finding a bit of solitude. It’s also some screaming-fast singletrack sure to turn the corners of your mouth sharply upward.

“Awesome ride! Super green up there […] Climb up the fire road, 7N23. Spectacular views! Guessing it can get very hot there in the summertime, recommend this one in spring or fall!” -dbmtb70

The Blue Ridge Trail delivers fast and flowy singletrack in the northern part of the Angeles National Forest in the hills above Wrightwood. Some scream through here pretty fast, so it’s good that there are also multiple other singletracks in the area which can be added on for some serious mileage.

“Love this trail. It’s a great workout riding to the top then enjoying the downhill. Magnificent views and drops. I try to ride this area whenever I’m out in the I.E.” -JoJo Valdez

Chantry Flats is popular for its outstanding bench cut singletrack through quintessential San Gabriel Mountain terrain. The place is just plain inviting, but go during off-peak times if you can to avoid the crowds.

“Have not found a better trail around LA yet. It is crowded on weekends, [and it] has some technical parts [and] steep cliffs.” -xtian

Tapia Canyon is an excellent example of what mountain biking in the area is like, with the typical tough fire road climb finally rewarded with a mostly smooth and fast downhill.

“This trail has got to be my ALL TIME favorite. The singletrack is awesome. The climb is great because (1) it’s not too grueling and (2) the terrain varies so you have some up and down to the towers. Don’t get me wrong… it’s still a climb, but compared to other trails it’s a whole lot more fun.” -Highlander664 via SoCalMTB

Idlehour is an absolute screamer of a downhill on the east flank of Mt. Wilson. There is both super fast, smooth singletrack and some techy, rocky bits. One of the main draws of this trail is it sees fewer hikers than other area trails, allowing riders to rely a little less on their brakes.

“The trail is no slouch… and the 800 foot climb back out of the canyon is a grind… but [it] offers some incredible vistas. On warm days, plenty of water is definitely recommended. Because of it being more remote/less used from other trails in the Mt. Lowe/Mt. Wilson trail network, I suggest riding the trail with a wing-man, in case anything goes wrong.” -mreusser

Besides sitting next to all the action of the Los Angeles metropolis, the Angeles Forest offers a few tricks of its own for visitors who venture within. Here are five non-biking activities worth looking into.

The Bridge To Nowhere is a classic arch bridge spanning the East Fork of the San Gabriel River. In addition to the area offering the usual array of water sports, the bridge is one of the only spots in California with a commercial bungee jumping operation.

Take a hike or horseback ride through an area of fantastic geological wonder. A nature center also provides interpretive displays and educational programs.

The Mt. Wilson Observatory has a storied history in the annals of astronomy. If you find the trails in the Angeles National Forest to be too busy on weekends, the observatory gives public tours on Saturday and Sunday.

Just south of the Forest, you’ll find the Descanso Gardens which, in addition to showing multiple wondrous gardens, also has a grand estate and art gallery.

We’re gonna be at Jackson Lake in Wrightwood, CA in a few weeks. Anyone familiar enough with this area to point us in the direction of good hiking trails? #jacksonlake #wrightwoodca #hiking #jacksonlakeca

Easily-accessible Jackson Lake is a popular recreation area for fishing and non-motorized water sports. It also has a hiking trail that’s perfect for a pleasant stroll.

Just west of Devil’s Canyon, the mile-high Chilao Campground delivers clear air and fine scenery, all within striking distance of the city.

Sitting below the north flank of Mt. Wilson, the Valley Forge Trail Camp welcomes self-sufficient visitors to a handful of remote, pack in sites.

A quick little getaway with my dad. Trying to get the truck ready for a trip to the Grand Canyon!!! #buckhorncampground #angelescrest #overlanding

Sitting all the way up at 6,300 feet, the Buckhorn Campground will surround you with tall pines and beautiful cedars. It will also put you in close proximity to the Silver Moccasin National Recreation Trail, as well as the Pacific Crest Trail.

Live it up at 6,000 feet with flush toilets. Manker offers 21 sites available on a first come, first served basis.

Sitting close to the base of the best rides in the Angeles National Forest, the Montrose Bike Shop welcomes both locals and visitors heading into the forest.

With three locations at the base of the Angeles National Forest, Incycle can be a convenient stop on the way to the forest.

In business for over 40 years, Pasadena Cyclery receives excellent ratings for customer service.

Mark’s isn’t the biggest shop on the list, but it does excel in friendliness and customer service.

Gear
These MTB Deals are Fire, including 40% off Patagonia Dirt...
Progression
Sizing Up or Down Plus Handlebar Widths and Crankarm Lengths:...
Gear
The Maxxis Minion DHF Tire is Still the One to...
Gear
Never Underestimate the Power of a Good Zip-tie
Subscribe
Login
Please login to comment
1 Comment
Most Voted
Newest Oldest
Inline Feedbacks
View all comments

The Devil’s punch bowl use to be open to mtbing. It was a great ride. I’m not quite sure when they closed it to mountain bikers, but is still s good hike.