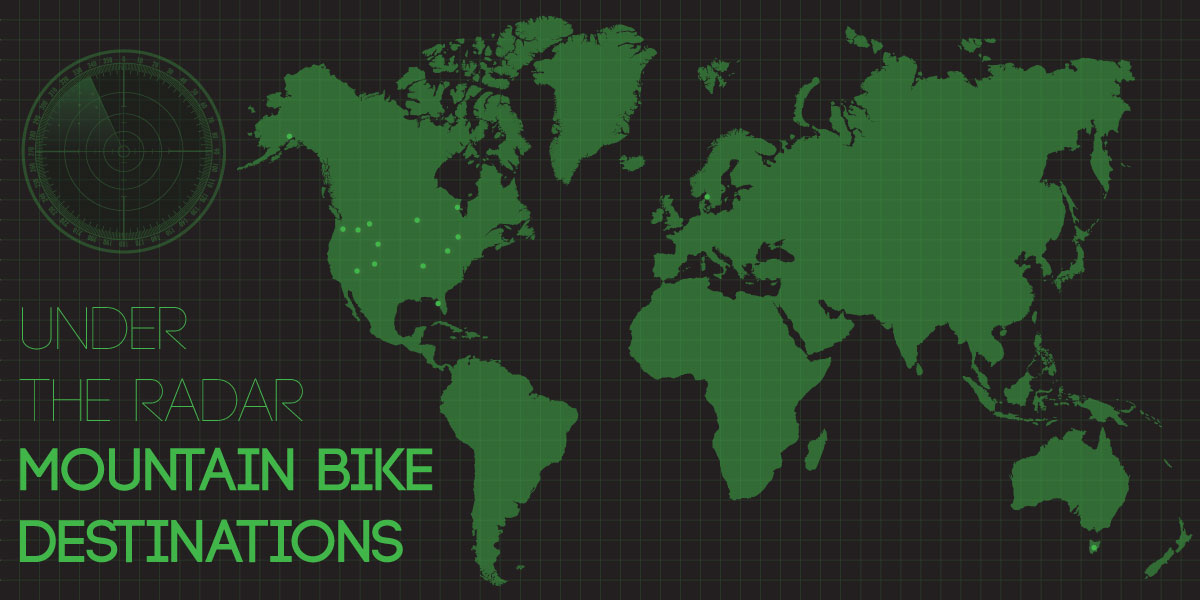 As mountain bikers, we’re always in search of the next great adventure. While it’s interesting to debate which destinations are “up and coming” and which ones have already arrived, there’s an entirely separate class of mountain bike destinations that are flying under the radar.

In putting this list together we consulted multiple sources, including our own survey data and massive trail database, government websites, and the opinions of inveterate singletrack explorers. The result: a handful of mountain bike destinations around the planet that we’re dying to explore (or in some cases, places where we’ve only scratched the surface). You won’t hear many mountain bikers talking about riding in these places… but you may someday in the future.

While all of these destinations offer a tempting array of singletrack trails to explore, in many cases you may want to pack your own tent and a cooler of beer before leaving home.

Truly the entire state of Alaska is an under-the-radar mountain biking destination due to the fact that few live there and it’s tough to get there. Still, even the largest and arguably most accessible city in the state, Anchorage, boasts countless trails and dirt roads begging to be explored by bike–yet few mountain bikers can claim they’ve sampled the local trails. If you go, be sure to hit Kincaid Park as part of your trip–it’s the highest rated trail in the area according to Singletracks members who have been.

Let’s face it: Colorado is pretty much dead center on most mountain bikers’ radars. But it’s a big state, and there are still many places where few mountain bikers tread. Del Norte is one of those locations, and not because it lacks excellent singletrack. Instead, Del Norte is mostly overlooked due to the fact that it’s nowhere near any of the front range cities and lies two hours east of Durango which, although fairly well known among mountain bikers, still isn’t all that accessible. Look for Greg’s Del Norte trip reports from his summer scouting trip, coming soon!

When mountain bikers think Europe, many destinations may come to mind, but admittedly Sweden is not one of them. That’s fair–the terrain isn’t particularly suited to big climbs or descents, but what Gothenburg does have is an extensive collection of unique and entertaining singletrack trails that few have experienced. Greg’s recent series on Gothenburg was perhaps the first radar blip, but this place probably won’t remain stealth for much longer.

If you knew that Hobart was the capital of and largest city in the Australian island state of Tasmania, give yourself a gold star. If not, that’s ok–most would have a hard time identifying Tasmania on a map. But this small city (by world standards anyway) is embracing mountain bike tourism and doesn’t seem content to fly under mountain bikers’ radars much longer. The government has spent nearly $5 million so far to construct 100km of trails just for your enjoyment.  You’re welcome.

According to the Wikipedia, the Ouachita and Ozark Mountains form the US Interior Highlands, one of the few major mountainous regions between the Appalachian and Rocky Mountains. And while Ozark mountain bike destinations Fayetteville, AR and Bentonville, AR have each received nods as IMBA Ride Centers, the trails around Hot Springs and Mt. Ida just haven’t received as much press. Our own trail database lists a dozen trails within 25 miles of Hot Springs, including the highly-rated Iron Mountain, Womble, and Lovit systems.

When mountain bikers mention riding in Wyoming, they’re almost always referring to the mountain trails in the Tetons at the far western side of the state. And yet, the highest-rated trail system in the state (according to Singletracks members anyway) is Curt Gowdy State Park, halfway between Laramie and Cheyenne–much closer to Nebraska than Idaho. Not only that, you’ve probably heard of a couple other excellent Laramie area trails, but just didn’t realize it: Vedauwoo and Happy Jack Recreation Area are nearby.

Some of this has to do with the fact that Wyoming is the least populated US state but still, even Jackson, with hundreds of miles of trail, isn’t among the top 10 mountain bike destinations among riders living in the Rockies. So don’t be surprised to see a Wyoming destination like Laramie pop onto the radar soon–it’s only a matter of time.

The upper midwest already has a surprising number of destinations on riders’ radars, including Duluth (MN), Copper Harbor (MI), and Cable (WI). Marquette, MI is a place that is currently flying low but is quickly gaining altitude as new flow trails are being developed and actively marketed to riders in the region. Marquette squeaked in at #10 on midwestern mountain bikers’ wishlist for 2015, but not for a lack of excellent riding–this place is just too new to have built up decent awareness. 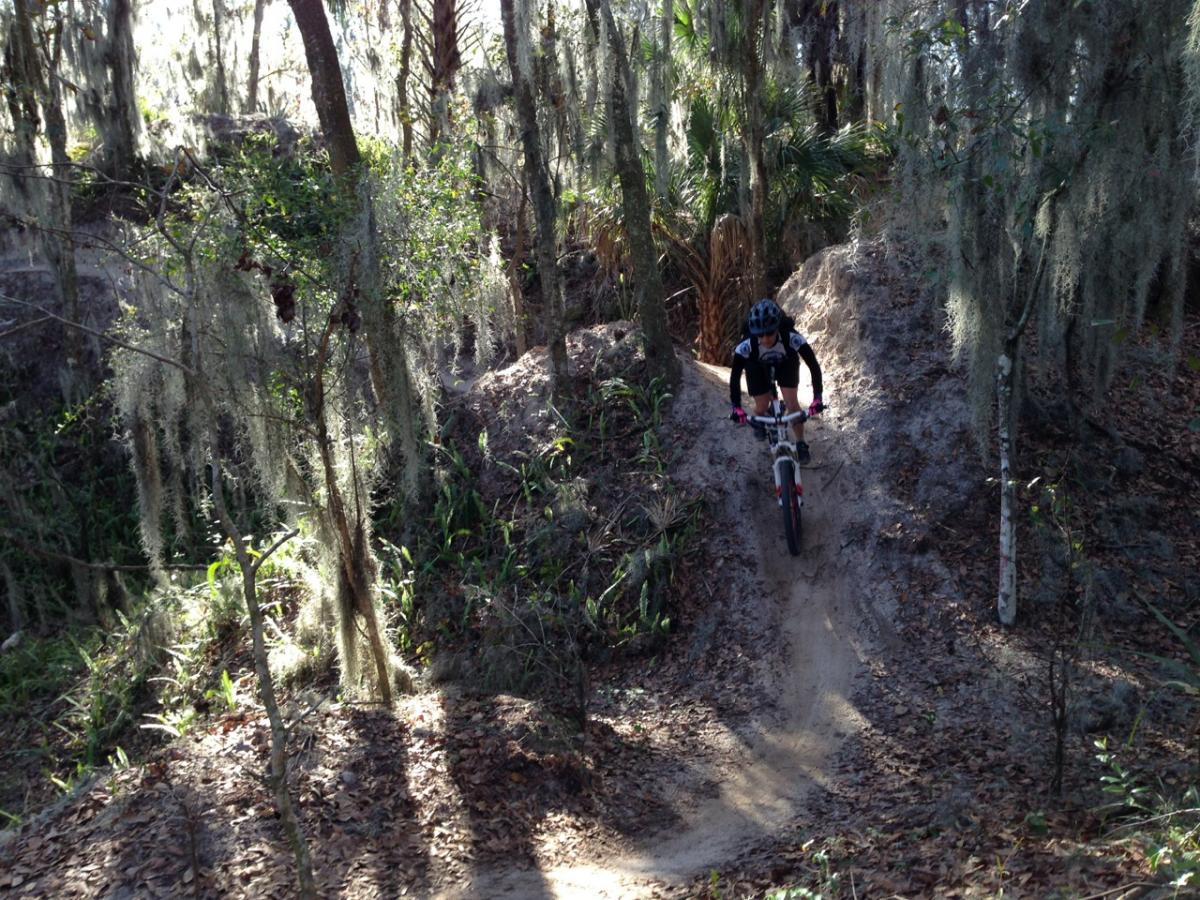 Admittedly Lakeland, FL isn’t close to any of the trails I’m about to mention, but it’s pretty centrally located to three excellent Florida mountain bike trails: Alafia River State Park, Balm Boyette Scrub Preserve, and Loyce E. Harpe Park. Among mountain bikers living in the southeast, many are marginally aware of the Santos trails in Ocala but even fewer have plans to visit Lakeland, which is just east of the Tampa bay area. Individually, each of the three trails I mentioned above are among the top 10 most popular in Florida and they’re all within about a 30-minute drive of each other, making this an excellent–though overlooked–wintertime destination.

It turns out that West Virginia is the most mountainous state in the US, so it’s strange that few mountain bikers place the state high on their list of places to visit. Admittedly I don’t know a lot about the best places to ride in West Virginia but if I had to choose a spot to visit, it would be Marlinton, WV. Within 25 miles of Marlinton riders can hit Slatyfork (a perennial under the radar spot) and Snowshoe Bike Park, plus dozens of other 4- and 5-star-rated trails. Wild and wonderful, indeed.

Sedona and Flagstaff get all the love in Arizona, but on the eastern side of the state close to the New Mexico border, mountain bikers will find dozens of trails to explore. McNary, AZ, is perhaps the most centrally-located town to the area I’m talking about, but clusters of trails can be found around Show Low, Pinetop-Lakeside, and Greer. Some trails–like those at Sunrise Ski Park–are well-established while others are, for all I know, ghost trails that may or may not exist anymore. Of all the areas on this list, McNary is probably the place I’m most interested in exploring.

South Dakota will probably never be the next Colorado or even the next Arkansas when it comes to mountain biking. Still, the Black Hills of South Dakota offer excellent singletrack trails that few mountain bikers have experienced, including the 100+ mile Centennial Trail. And if that’s not enough, Buzzard Roost and Victoria’s Secret are two other Rapid City area trails that come highly recommended.

Salmon locals may prefer that their singletrack remain undetected but pretty soon, word has to get out (loose lips sink ships, after all).  Singletracks member chukt has been tooting Salmon’s horn for years, and yet it still doesn’t crack mountain bikers’ list of top western mountain bike destinations. I’ve never been to Salmon but when I do make it out there, I have to hit the Wagonhammer and Discovery Hills trail systems.

Residents of the Pacific Northwest (and the rest of the country, for that matter) tend to focus on destinations like Whistler, Bend, Downieville, and Tahoe, but it turns out there’s an insane number of trails about an hour east of Seattle surrounding Stevens Pass. Sure, there are the trails at the Stevens Pass Bike Park, which tend to draw mountain bikers, but there are also dozens of named forest service trails branching out in every direction.

Many of these trails are also open to motorcycles and/or ATVs, but that doesn’t necessarily mean they aren’t worth riding on a mountain bike. Also keep in mind the trails tend to dry out the further you head east toward Cashmere which, depending on the season, could be a nice change from the damp trails closer to Seattle.

Even among mountain bikers living in the northeast, State College, PA and Rothrock State Forest sorta fly under the radar while places like Kingdom Trails, Allegrippis, and Highland Park (NH) light up the screen. Still, few who have experienced the trails in this area can deny that they are world class and worthy of exploration. For a taste of what the riding is like in this part of Pennsylvania, check out Aaron’s race report from this year’s Transylvania Epic.

Talk about flying under the radar! When we recently ran the numbers to see which cities had the most high quality singletrack, Whitefish/Kalispell snuck into the top 10 like a stealth bomber. We found an insane number of singletrack trails in the mountains surrounding the Whitefish / Kalispell valley (nearly 500 miles total), and yet less than half those trails have been reviewed by Singletracks members yet. Who knows, maybe these unknown trails aren’t that great–but just the fact that they probably exist has my interest piqued!