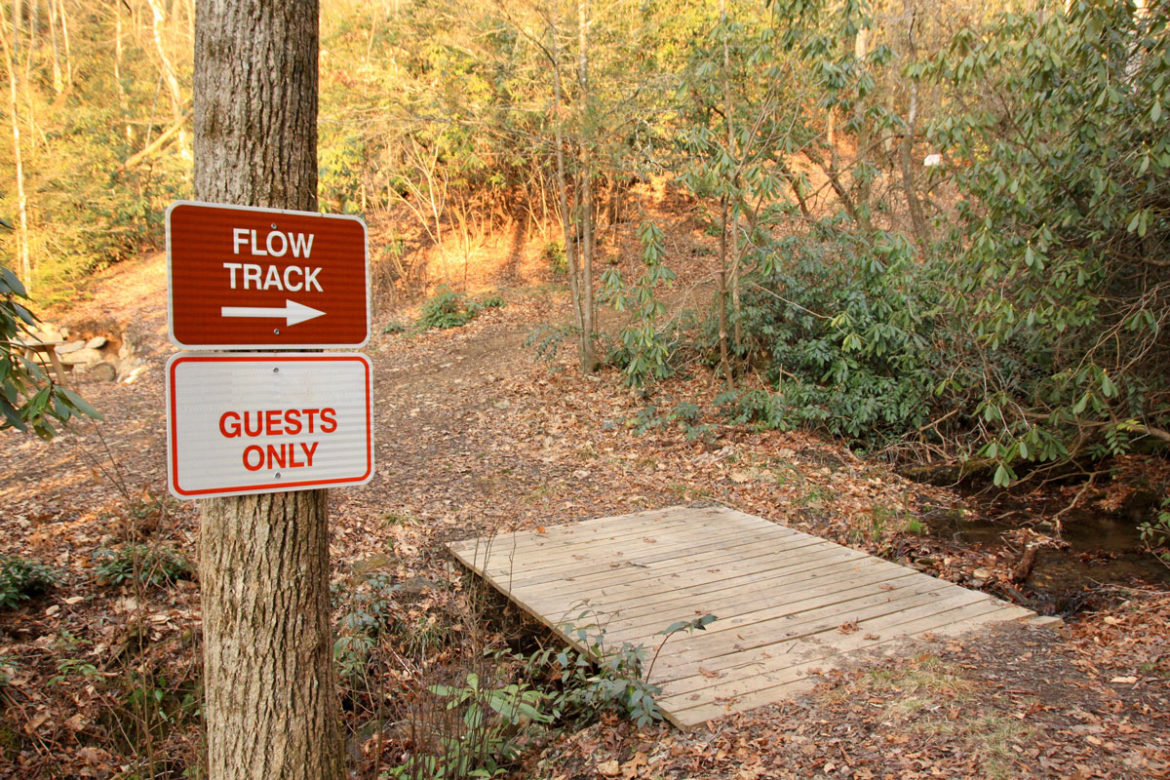 As mountain bikers work to gain access to more public land, another trend is taking shape in the mountain bike world. In parallel with the current expansion of our sport, more and more private landholders are developing gated singletrack on their grounds.

Many mountain bike trails located on private property charge some type of user fee, either directly or in directly. This is often necessary because construction, maintenance, and liability costs must be recouped. The upshot is private landowners have greater freedom to develop trails on their property, free from public hearings or environmental reviews. As a result, trails are built specifically with mountain biking in mind, and can incorporate features that would never be approved for public land.

The following is an overview of the types of private mountain bike trails that exist today.

Lodging providers seeking to attract mountain bikers are are adding private trails to their list of amenities. In fact, mountain biking has reached such a level of popularity and economic clout that bike-specific getaways are popping up.  These venues may build and maintain trails for the exclusive use of their lodging guests, charge a fee for day trippers, or in some cases, even allow free use for visitors while drawing revenues from other offerings. Some offer a suite of biking services such as bike rentals, lessons, guiding, shuttles, or lift services.

Bike getaways are often located near public lands offering plenty of bike-legal trails. Sitting right in the heart of the “Moab of the east,” Pisgah National Forest, Pilot Cove has a mile or two of private trails available for guests only. Just beyond the property, guests also have immediate access to marquee Pisgah rides.  Similarly, nearby Reeb Ranch, an event space owned by Oskar Blues Brewery that offers lodging, has its own private skills park, and a trail that connects to excellent public mountain bike trails in Dupont State Forest. Clearly lodging providers see offering exclusive and private trails as a way to entice guests to book with them.

Virginia’s Massanutten was originally known for its winter skiing. As is to be expected, with lifts on site, Massanutten has a resort style bike park, but the Massanutten West Slope also has 30 miles of earn-your-turns trails, including some genuinely chunky eastern rock gardens, for the exclusive use of Massanutten guests.

With a similar setup, New Mexico’s Taos Ski Valley has one of the world’s premier ski hills on one side of the valley, and one of the most scenic cross country mountain networks on the other side of the valley, called Northside at Taos. The trails are rated advanced, mostly due to the aerobic requirement rather than technical challenge.

McCall Idaho’s Jug Mountain Ranch has a unique setup in that it’s trails represent an additional amenity for the resort’s home-owning residents rather than transient lodgers or day tripping lift riders. Making the model even more interesting is that you wouldn’t normally think of the middle-aged (and older), second home/vacation home owning golfers to be they type of crowd clamoring for gnarly singletrack. But the Jug has brought on board serious shredders to help design and build some killer trails, and given them great leeway to make some legit black diamond trails more suitable to dirtbag gnar hounds. Best of all, you need not be a homeowner just to ride the trails, and the fee for doing so is… zero.

Just as mountain bike getaways and traditional ski resorts with on-site lodging are growing, so are bike-specific ride centers intended as day trip or single visit venues.  By now, most people have heard of the first big name in the game, Ray’s Indoor Mountain Bike Park. One way to beat the winter blues, or even rainy weather year round, is to have a place to ride that is never weather dependent. That means having a roof over your head, and Ray’s has successfully perfected that model.

But great biking needs room to roam, and being inside a building of finite volume is naturally constraining. Folks in Kentucky found a most creative and unique way to expand the available “terrain” in an enclosed area, by turning a cave into an indoor bike park at the Louisville Mega Cavern, now the worlds largest “indoor” bike park with a constant year round temperature of 60 degrees.

New Hampshire’s Highland Mountain Bike Park is unique among ski hills turned bike parks. All other such bike parks turn back into ski hills when the snow flies. Highland just goes dormant. This bike park is no longer a ski area at all. Like literally hundreds of other small New England ski areas, the Highlands Ski Area simply ran its course and shut down the lifts, seemingly for good, in 1995.  But hardy mountain bike entreprenuers have resurrected the lift service and now present one of the world’s only mountain bike-specific lift accessed bike parks.

Backyard pump tracks and jump lines are no longer just the province of pro riders. Plenty of moms and dads are paying trail builders to construct mountain bike playgrounds for the exclusive use of their groms. In fact, at least one professional trail builder we know tells us he does more work building trails and pump tracks on private land than on public land. Private owners often strictly control access to their trails due to liability and privacy concerns, keeping these trails out of the public domain.

While state parks are actually public lands, and some states have no access fees for their facilities, most state parks require users to pay-to-play on their trails. This is nothing new, but what is a positive trend is that some states have made a deliberate effort to make mountain biking a part of new offerings. Kansas state parks hit a home run when they put the Switchgrass trail system, now a major destination, into Wilson State Park, making the park appealing to more than fishermen.

In Georgia, some state parks charge a per-rider fee in addition to a general parking / gate fee.

Possibly the most expensive way to buy your way into private trails is to buy a house. New housing developments have recognized trails as amenities, and build trails into their master plans.  In some cases, these trails are exclusive to residents of that particular housing development. This seems like a no-brainer in bike-crazy Colorado, where two of Denver’s suburban areas, Highlands Ranch, and Ken Caryl Valley, have dirt trails exclusively for the use of their residents, complete with patrols verifying residency of users, and who will be more than happy to prosecute anybody else for trespassing.

Some pay-to-play trails are only open, even to paying customers, at very limited and specific times, generally during races or for special fund-raising events. The DuPont family opens one of their estates in Delaware annually for the Escape Granogue race. Riders’ race entry fee is their ticket to ride the trails on the estate, and the proceeds go to a worthy charity.

In Colorado, this model is employed in some of the NICA high school races. An excellent singletrack course sits on private land near Nathrop between Salida and Buena Vista, and opens one day a year for a NICA race. Fortunately, while a few decades removed from high school myself, I got to ride this entertaining course as my son was a competitor and parents were invited to join their racers on the course pre-ride.

Is pay-to-play good for mountain biking?

So why should anybody even care about places where payment is a prerequisite to ride when there are so many public lands with no fees? Mostly because many of these places offer something unique, and more options is always a good thing. At the same time, mountain biking has always been distinct from other sports like golf where courses are often private or at the very least, charge a fee for usage. Still, plenty of riders appear to be willing to cough up a few bucks to ride uncrowded trails, experience specific features, beat the weather, or access uplift services.

Your turn: What do you think about the rise in pay-to-play mountain bike trails?

Trails
Pairing Trails and Ales in Pisgah and Dupont
Trails
How to Mountain Bike Car-Free in Pisgah with Pilot Cove
Trails
All of the Epic Destinations We Wrote About in 2015...
Trails
Private MTB Club Boasts Exotic Trails All Over the World

On the flip side, IMBA has argued in the past that charging a fee or even requiring a waiver for access to trails actually increases the risk to landowners. Not sure I fully understand the argument, but essentially government organizations are better insulated from risk than private individuals.

I believe Utah legislators have passed a law that holds both public and private landowners harmless if they allow the public to use their land for “recreational” purposes (mtb, hiking, hunting, fishing, skiing, etc.). It could be that once you start charging a fee and requiring a waiver the landowner forfeits that protection by acting as a commercial entity. Not sure, just thinking out loud.

I’m not against pay-to-play trails, but I do feel nickel-and-dimed with more and more trails charging parking and/or access fees. Many trails in my area now have $5 parking fees with $0 of that going to trail maintenance. I’m OK when an annual pass is $50 and gets you access to more than a single spot (ie State Park pass). However, I’m not going to pay $50 for a parking pass that gets me into exactly one trail though.

I ride more than (6) trails regularly and if I’m expected to fork over $300 each year for passes, I think that is crossing a line. This isn’t about supporting trails either. Its all straight revenue grabs….and its a little off-putting.

I think pay to play is fine. If someone spent thousands of dollars and or hours to build trails they need money to maintain the trails. I live in Charlotte and I pay $50 a year for a parking pass to ride 25-30 miles of trails at the Whitewater Center or you can pay $3 to ride at Rocky River (12ish miles). Both are worth every penny.

I’m fine with pay-to-play. I don’t want the tax payers to foot the bill for my MTB hobby. Then again, don’t ask me to pay for their hobbies that don’t interest me. I’m ok with taking that logic beyond hobbies too (within reason.)