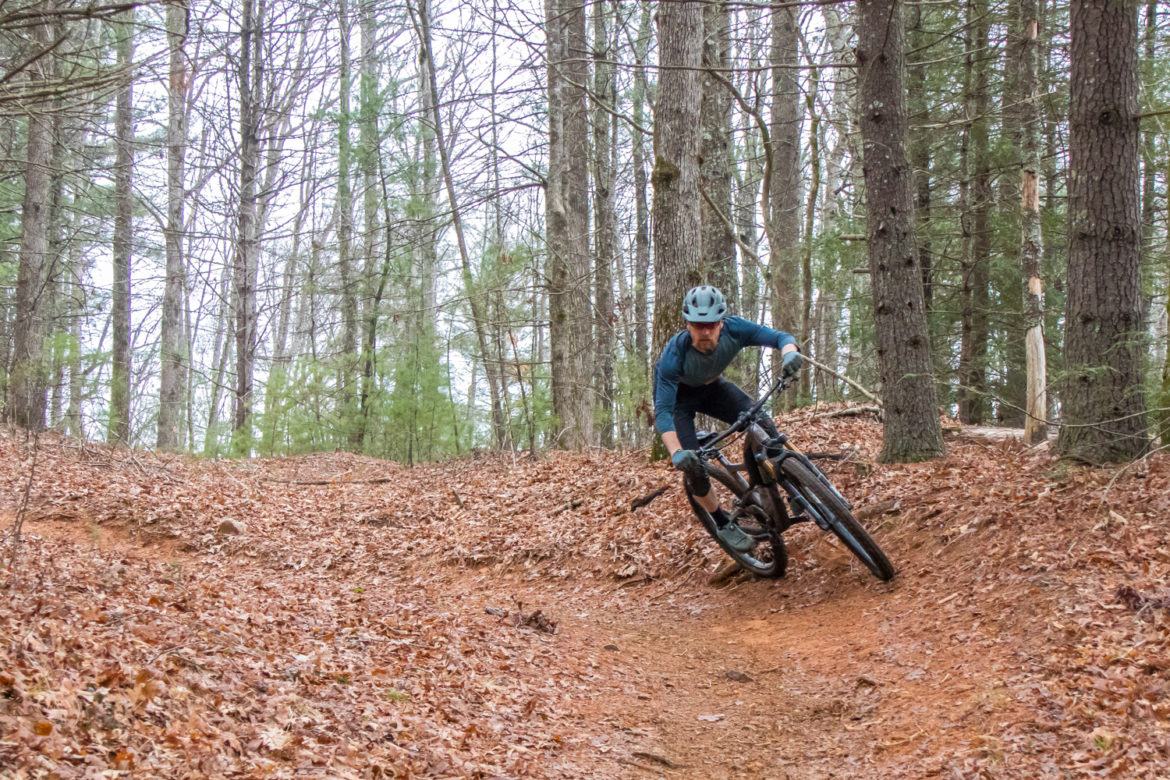 Pairings… they’re all the rage these days: wine and food, beer and food, marijuana and food (give me a break, I’m from Colorado), the list goes on and on.  It seems we mountain bikers have been left out of the game when it comes to putting our favorite things together.  Until now:  let’s talk bike trails and beer. 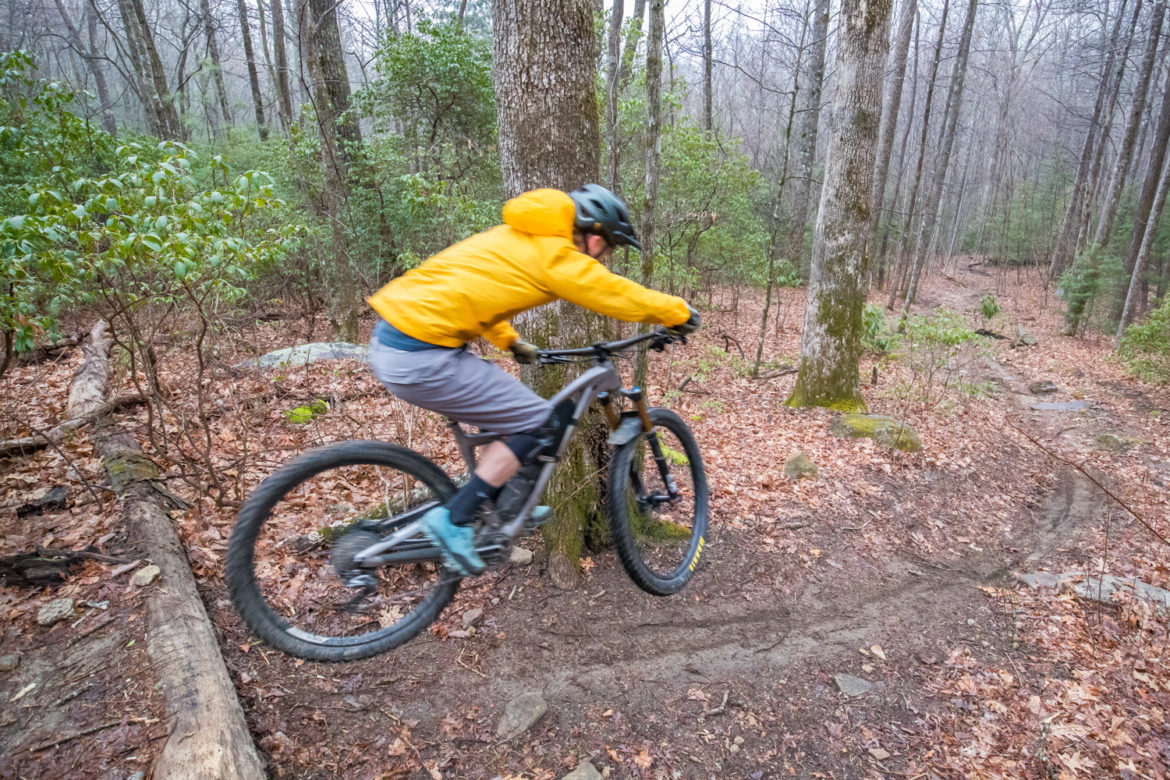 Have you ever traveled somewhere to mountain bike, and when you get home your friends ask how the trails were?  It’s not always easy, especially when you ride somewhere completely different than your home trails.  Let’s take an entirely different approach, and describe a trail system in the way we describe our beers.

This past spring, I headed east from the Boulder area during an unusually snowy March to explore the best of Brevard, North Carolina.  And what’s the one thing these two places have in common?  Oskar Blues beer.  That’s where it all comes together.

Brevard is located about 45 minutes south of Asheville, and sits in a beautiful temperate rainforest valley between Pisgah National Forest and Dupont State Forest.  The riding in the two areas couldn’t be more different, but it’s supported by a riding community that has a few things in common:  have fun, ride bikes, and meet new friends.  From the awesome food trucks parked outside the Pisgah Tavern and the Hub to the Reeb Ranch, this place oozes mountain bike scene.  Even one of the higher-end lodges, Pilot Cove, has a flow trail on its property so you can get more riding in after your main ride.

There’s no two ways about it: Pisgah is rowdy.  We spent some time in Spain this winter where one of our guides described a trail as “fighty,” and that’s a pretty accurate call on Pisgah as well.  The National Forest is huge, stretching from the Asheville area all the way over to the Blue Ridge Parkway and down into Brevard, so the trail options are numerous.  We decided to stick to the trails close to town so we could ride from The Hub and create several loop options.

Climbing in Pisgah is mostly done on long fire roads; with names like Clawhammer and Turkeypen Gap, you know you’re in the deep south.  Occasionally you’ll mix in some singletrack climbs, and be prepared for wet roots and rocks, and steep pitches that get you breathing hard and sweating profusely.  You’ll earn that beer we talk about a little later.

The descents in Pisgah are fast, flowy, relentless, and really tough.  They bite you in the ass, and you’ll feel the pounding the next day.  Coming from the mountain west, we hardly ever ride on wet trails, so it was a shock to get thrown into a trail like Bennett Gap with slick rocks and icy-wet roots.  But man was it fun.  All told, we explored some of the classics like Bennett Gap, Black Mountain, Sycamore Cove, and Daniel Ridge over the course of a couple of days, and we came away impressed and looking forward to more.

You know that beer that has a bite to it, but once you start drinking it more and more it gets progressively smoother?  And once you get used to it, you can’t get enough?  That’s Ten Fidy.  And that’s Pisgah.

Ten Fidy has a rippin’ 10.5% ABV, which is going to make you feel it the next morning… just like riding in Pisgah.  They’re both fun to experience, but you better be on your game or else you won’t want to get out of bed the next morning.

Across the valley, about 10 miles as the crow flies, sits Dupont State Forest, which offers an almost 180 degree contrast from the riding in Pisgah.  Where Pisgah was rowdy and technical, Dupont is flowy, fast, and smooth.  But don’t take things for granted in Dupont; there’s more than meets the eye.

Sure, Dupont is known for its flow trails like Ridgeline and Reasonover, and they’re a lot of fun.  But at the same time, there are plenty of sections with techy spots and playful features to challenge riders.  The Burnt Mountain – Cedar Rock area has quite a bit of slickrock and several cool stretches that have you thinking you’re riding Moab west, but then you look out at the views and see nothing but temperate pine forests, and you come snapping back to reality.

To us, combining Dupont and Pisgah makes for the perfect contrast of mountain bike trail riding.  We like variety in our trips, and that means mixing it up and staying on our toes.  With Dupont, we put in big miles (25+ on the full day, and 15+ on the half day we rode) and didn’t feel like our bodies were put through the beat-down machine.  There were descents that had us grinning ear to ear, the type of flow where you just lose yourself in the moment and don’t realize how fast you’re going.  That’s Dupont for you.

Living in Colorado, we have a plethora of beer options, and it seems like all of the best breweries are putting their darker stouts and Scottish beers on nitro, and we’re OK with that.  Old Chub was already one of our favorites, but when Oskar Blues put it on a nitro draft, it became heaven in a pint glass.  It’s smooth and a little sweet (with hints of coffee and chocolate), but be careful because it has 6.9% ABV so you don’t want to get going too fast without thinking about the consequences.

Sure, the hoppy IPAs and Pale Ales are the trend these days, but it’s OK to admit you like a smooth drinking beer with some flavor.  And that’s how we look at Pisgah: it’s A-OK to want to go fast on smooth trails and have a rippin’ good time.  Because you know what?  You can beat the hell out of yourself the next day by riding Pisgah and having a Ten Fidy when you’re done.

I enjoyed this article. Great write-up!