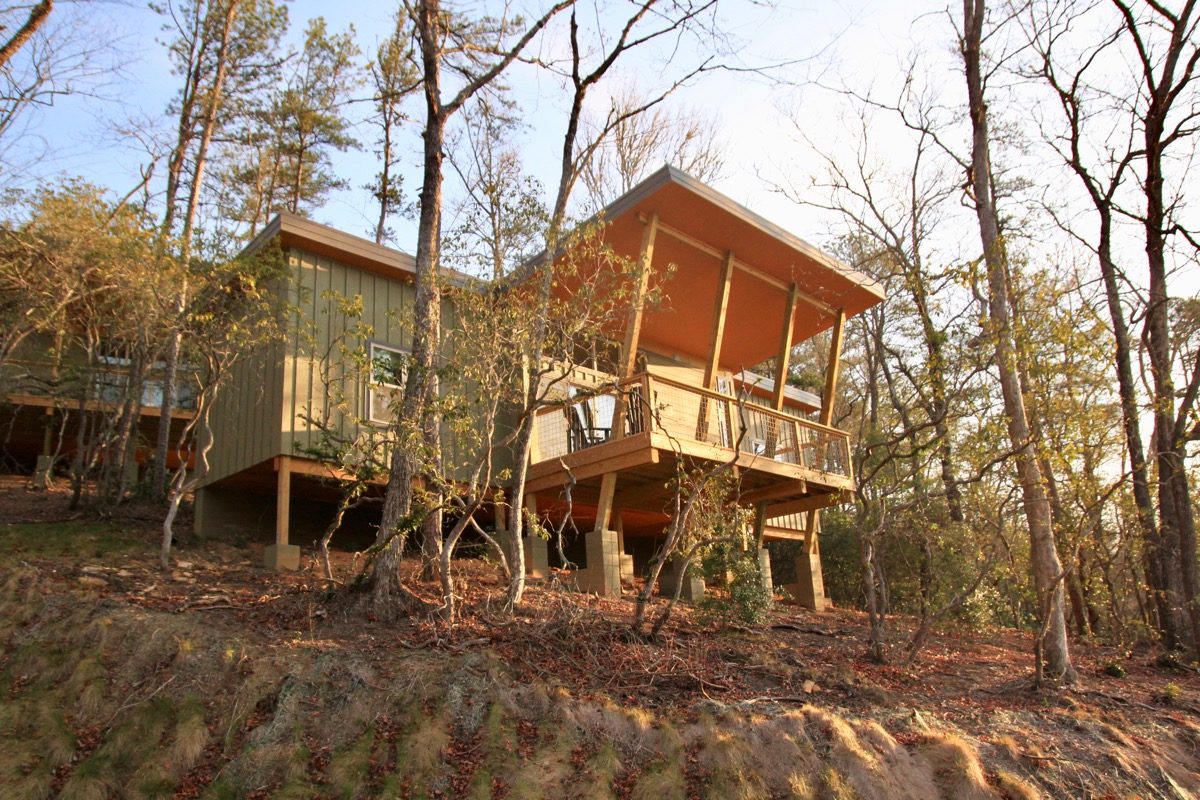 Coordinating the logistics for an epic mountain bike trip can feel like planning a major military operation. But now, thanks to Pilot Cove, a trip to ride the best mountain bike trails in Pisgah National Forest can be pulled off with just a carry-on bag. Read on to find out how to make this happen.

Touch down in Asheville

Mountain bikers can fly into the Asheville airport (AVL) on one of four airlines that operate daily service. Packing all the necessary riding gear into a single carry-on bag is indeed possible, and with most airlines, this avoids the cost (and hassle) of checking a bag. Pro tip: slip a laptop into a hydration pack to add a second bag for free.

Pilot Cove offers 10 modern, luxury cabins located right in the heart of Pisgah. Guests can choose from studio cabins designed for one or two guests, one-bedroom cabins that fit four adults, or two-bedroom cabins that sleep up to six people. All of the cabins were constructed within the last year or so, and it’s clear they were built with mountain bikers in mind.

My family and I recently stayed in a two-bedroom cabin for a weekend biking trip. Walking up to the entry, I immediately noticed a hook mounted to the wall of the covered porch, the perfect spot for locking expensive bikes out of the weather. Inside the front door, there is a “mud room” with concrete floors, a bench, lockers, and plenty of hooks for storing dirty bike gear. There’s also a washer and dryer in the entry, with a couple Tide Pods included.

Our cabin was filled with tasteful outdoor- and bike-themed decorations, from the mirror trimmed with a bike rim to the lock-on, bike grip towel hooks in the shower room. The main living area is open and bright, with huge windows looking out over the mountains to the east. Two bedrooms flank either side of the living area, and there is a sleeper sofa in the living room.

The kitchen has everything mountain bikers need to prepare meals and the dining room table is perfect for sharing a big meal or scheming over a giant map of Pisgah mountain bike trails. A massive deck juts off the back of the cabin, and there’s even a hammock available for relaxing after a big ride.

Guests at Pilot Cove have access to a couple great picnic areas with tables and grills for eating outdoors. There’s also a flow track with a massive wooden berm, along with about a mile of trail on the Pilot Cove property that is available for guest use.

Getting food at Pilot Cove is no problem, which is good because riders will be hungry after riding all day! Pilot Cove is located within walking distance of a large grocery store and a Wal-Mart, so stocking up on supplies is easy, even without a vehicle. Not only that, there are easily half a dozen restaurants just down the hill from Pilot Cove, including Wild Hawg BBQ, El Chapala Mexican restaurant, and a rotating cast of gourmet food trucks that park outside the Hub.

And have no fear, beer is near. Ecusta Brewing Company is located just across the street from Pilot Cove. (Try the First Descent IPA or the latest beer in the brewery’s Single Track series.) There’s also the Pisgah Tavern, attached to the Hub bike shop, located at the end of the driveway.

Now that riders’ basic needs are taken care of, it’s time to ride! There are two excellent bike shops within walking distance of Pilot Cove–Sycamore Cycles and the Hub–and both rent all types of mountain bikes, ranging from XC to enduro. Choose from Santa Cruz, Specialized, Norco, Yeti, Rocky Mountain, Pivot, and Giant brands, just to name a few. Remember to book rental bikes online well in advance to get the right size and model.

Lodging? Check. Food? Check. Bike? Check. Car? Don’t need one. Some of the best mountain bike trails in Pisgah National Forest area located within riding distance of Pilot Cove. A couple years ago we asked experts about their favorite mountain bike trails in the state of North Carolina, and three out of the five trails they picked begin just a few miles from Pilot Cove. Riders can bike to three major trailheads on a flat, paved road, and be at the trailhead in no time. Like, even faster than loading the bikes in the car and driving over.

Black Mountain is the closest well known mountain bike trail to Pilot Cove, and riders can connect other great trails for a full day of riding. Moving further into the forest, the Avery Creek and Bennett Gap rides are within about 3 miles of Pilot Cove. Adding a couple more road miles gets mountain bikers to the Fish Hatchery, which is the launch point for epic rides like Farlow Gap and Daniel Ridge. Bracken Preserve isn’t too far from Pilot Cove either, and is a good one to combine with a pedal into the town of Brevard where there are dozens of great restaurants and shops.

Car-free and loving it

Lining up a rental car with a bike rack while navigating an unfamiliar destination to get to bikes, food, and trails takes time and adds stress. To me, there’s nothing more relaxing than going car-free on a mountain bike vacation, and a stay at Pilot Cove actually makes that possible.

Thanks to the folks at Pilot Cove for providing two nights lodging for our trip.

Trails
The Pisgah Project Fundraiser: Chance to win $9,000 REEB SQWEEB...
Trails
Searching for Beginner Trails in Brevard to Avoid East Coast...
Trails
Everything You Need to Know About Mountain Biking and Visiting...
Trails
Pairing Trails and Ales in Pisgah and Dupont