Imagine a mountain bike club funded by a billionaire with access to private trails in exotic locations all around the world. A club so exclusive the trails are guarded by stone and barbed wire fences while personal chefs prepare your meals for you at the end of a day of hard riding. It turns out just such a club may actually exist… 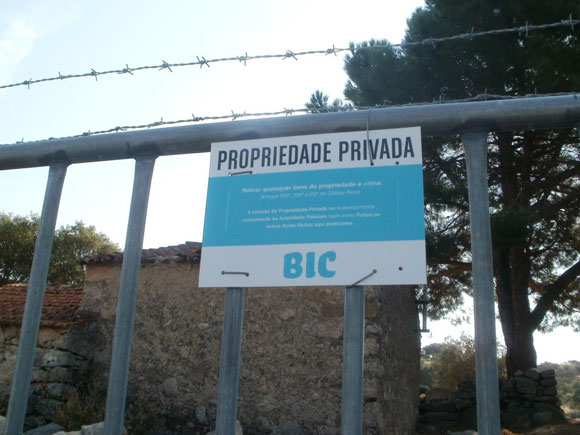 A reader recently tipped us off about a private mountain bike trail being constructed in Portugal near the Spanish border by a group calling itself the Global Conservation Mountain Bike Club. Initially locals were psyched about the project to build mountain bike trails on about 2,500 acres dotted with granite boulders and cork trees, hoping tourism might improve the relatively poor local economy. Efforts to reach out to the foreign trail builders didn’t get very far and soon 8-foot fences topped with barbed wire were erected around the site.

A group calling itself “SOS Sao Mamede” has been formed to fight the fences and here’s where the story gets interesting. After doing a little research, club members claim to have found a link to billionaire Kenneth Dart, an heir to Dart Container, makers of Styrofoam cups among other things. Dart himself is well known as a mountain biking enthusiast and conservationist so it isn’t hard to imagine he could be a supporter, though we couldn’t find any direct evidence he is involved with the Global Conservation Mountain Bike Club.

There are, however, stories online about Dart flying his Learjet to ride his mountain bike in remote places like the Yukon. In 1994 Dart renounced his US citizenship and moved to Belize in order to avoid taxes. Years later Bill Clinton was asked to speak at a political fundraiser at a mansion owned by Dart, and Clinton remarked “I don’t know what he is up to now, but I don’t want to go anywhere near this guy.” Dart keeps a low profile (some say he’s a recluse), fueling the speculation that he’s behind the secretive and exclusive Global Conservation Mountain Bike Club.

According to its website, the Global Conservation Mountain Bike Club’s mission is:

joining the enthusiasm and passion of truly dedicated mountain bikers and the willingness of private land owners to create a portfolio of world class single track mountain bike trails on gem properties around the globe. In doing so, a vast amount of majestic, virgin land in various climatic zones is being dedicated to environmental conservation and sustainable trail development.

The website showcases several of the properties including Blue Mountain in Jamaica with 2,000 feet of vertical descent plus a “kitchen staff (that has) become the best pizza chefs in the world, making from scratch pizzas in our on site brick pizza oven.” The club has access to 60km of trails in the Patagonia region of Chile and recently acquired Hamilton Island in British Columbia, renamed MacDonald island after the purchase. The club is also working on building mountain bike trails in New Zealand (check out the website to see plenty of drool-inducing trail pics).

The club’s ranch in Mexico, with 40km of trails, is currently closed after the 2010 murder of one of the club’s trail project managers, mountain biker Ken Klowak. Klowak and his colleague Scott Novak were en-route to the site when they were attacked by gunmen about 40 miles south of Eagle Pass, TX. Novak was also shot but survived the attack. 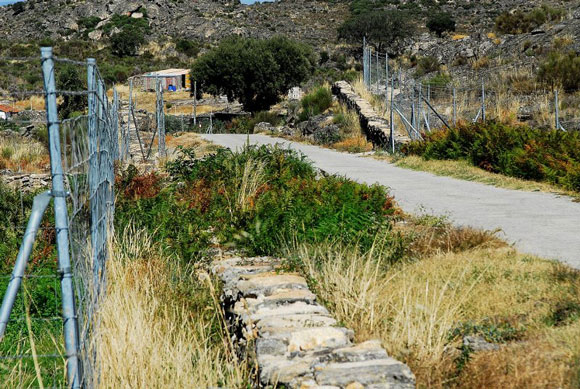 Back to the situation in Portugal. The SOSSao Mamede group wants to make it clear they are not anti-bike but they are concerned about closing off land that has been open and accessible for centuries. They’re also concerned about potential environmental issues like the use of cement in a park area where such materials are prohibited (perhaps for historical reasons?). Here’s how Richard Robinson put it:

These fences are turning this land from an open, accessible and welcoming one into one resembling a military zone. Wild boar have difficulty getting through, birds can be caught in and torn by the barbed wire and the fire services would be hindered in an emergency. Tourists (mostly walkers and cyclists) are noticing and they don’t like it. The trust and respect necessary between neighbours in such an environment is being replaced by concern and fear. This effect has nothing to do with mountain biking – it’s purely down to the fences.

I imagine the Global Conservation Mountain Bike Club has been caught off guard by the situation in Portugal and doesn’t seem keen on any type of publicity. And while they haven’t broken any laws as far as we can tell (other than the bit about the cement), the club can’t be too stoked about the locals’ reaction. Either way, it’s a fascinating story and incredible to think that such a collection of exotic mountain bike trails exists for an exclusive group of riders.

Where would you build your exclusive mountain bike trail system if you were a billionaire? What features would it include?

One question: how do you get into this club? I bet you’ve gotta have crazy $$$.

If I could build a trail anywhere in the world,….. well, there are already great trails in most of those places! And this club already has a pretty impressive portfolio of locales… I would have never dreamed something like this would exist.

As for features, it would definitely be technical! Tons of rocks, bomber descents, plenty of bridges, but awesome flow (berms berms berms) and some opportunities for air!

+1 How do you get in? Looks crazy cool! It’s like mountain biker’s fight club. All low key, top secret kinda sh*t.

Like the song says, “I wanna be a millionaire so frickin bad…”

Yeah, the admission process is a big part of the mystery. The folks in Portugal haven’t been able to get an answer and if you look at the “Guest Book” on the CG MTB Club website it’s plastered with the same question.

My guess: invitation only – and you gotta have a lot of land in an exotic location you’re willing to build trails on. 🙂

$$$$$$. More than I’ll ever have, anyway. fortunately, I have access to plenty of uncrowded, high quality singletrack.

As far as the blog’s final question is concerned, I have lost a little slobber looking at a couple privately owned areas that would make great riding venues. I used to make frequent trips between Great Falls and Helena, MT. As you follow the Missouri River on I-15, there’s fantastic rocky, partially wooded/partially open mountain scenery on both sides of the interstate. The potential for miles and miles of epic cross country riding with wicked fun natural techncial features is unmatched. I’m a firm proponent of private property, but I always thought it a shame that area wasn’t part of the Helena National forest.

The other area is to the west of Highway 155 between Colorado Springs and Canon City. This is wildly colorful geography; a pinion/ponderosa forest interspersed with gorgeous red rock slabs similar to nearby Garden of the Gods, but at more accessible angles. How fantastic it would be to run some singletrack through there!

Sorry, I think it’s too elitist to be given any publicity at all. Sort of rubbing the noses of the great unwashed in the dirt of the land purchased in the name of ‘conservation’. I call bullshit on this one, I’m afraid.
Cheers
egalitarianbarry 🙂

If I was a billionaire, the first trail I would build would actually be a pumptrack (or 3) in my backyard 😀

Shoot, if I was a billionaire, I would start my own ski resort (or buy one out). Always been a dream of mine. There would be SO MUCH downhill mountain biking during the summer….

They grow and roast their own Jamaican Blue Mountain Coffee:
http://www.globalconservationmtbc.com/Ken-Klowak-First-Annual.html

Read here for how to get “in”

I had read about this at Pinkbike, but I didn’t know it included the Ken Klowak Memorial ride at, wait for it, the Jamaica Compound of the Global Conservation Mountain Bike Club. 😀

“Later in the day on the 22nd we will make our move to the “Top-Secret” location in the Blue Mountains for the 2 day Ken Klowak Memorial Ride. Ken was the trail builder responsible for the fantastic riding at the site and we will pay our respects to a great friend by ripping his trails as he would have wanted.”

Only twenty spots. How fast does that fill up? Sounds next to impossible to ride? I’m sure not all those rides mentioned are private! Would be interested to know more sounds like a great week

“the club can’t be too stoked about the locals’ reaction. ”

Since when have clubs created for the rich and famous cared what the locals thought?

And if they’re not breaking any laws, it’s not much of a story. Group of people buy land and build tracks on it for their own personal use. It’s a common occurrence. This just happens to be on a larger scale, it seems.

i’ve got 25 acres of land next to these sites. The same terrain only nicer. I’ve got 1km of river bank. Anyone want to build trails and ride ’em is fine by me. Free, open accessible.