Not too long ago some internal problems at RaceFace nearly caused them to go broke. Well, with new managers at the controls and an ever-loyal following, RaceFace is running strong yet again. For me that was awesome news, as I have been using Raceface products ever since they opened shop. The Atlas group is their answer for any enduro or gravity rider.

The Atlas bar comes in a variety of colors and flavors for just about everyone’s personal taste. A flat bar, a ½” rise, and a 1 ¼” rise are all available in a variety of colors. I decided on a minimal rise of ½” for my review. At 785mm in width, the Atlas is just shy of the widest bar I have used. At 340 grams, I’d consider it to be about mid-weight, as the growing carbon market is pushing wide bars down to the mid-200s (grams). The bend is a familiar 8° back sweep, 4° up sweep, which puts your wrists in a comfortable position. The bar is internally tapered for a combination of strength, flexibility and low weight. 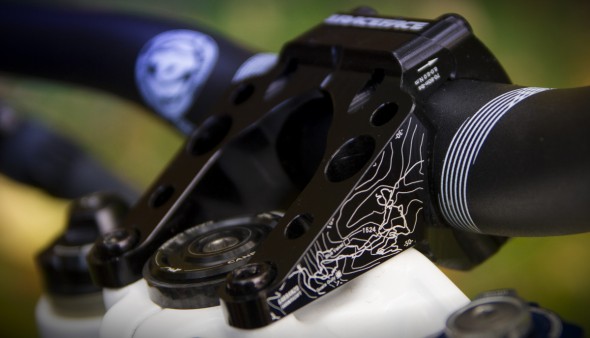 The Atlas DM stem is an excellent example of a dual-purpose stem. You can run the Atlas DM in a 50mm low rise (8.5mm ) setting, or a 30mm high rise setting (24mm). Flawlessly machined from 6061 aluminum, this 4-bolt clamp BoXXer-mount stem has been machined down to a scant 162 grams (including the hardware). The U-shaped clamp cap is a neat feature that interlocks itself nicely to the stem allowing for an even distribution of force from the bar to the stem (and not the bolts).

The Atlas DM (like the bar) comes in several colors: Rumred, Badass Black, Blue, White, and Stealth. This time ’round I decided to stick with black for the gear on my V10, rather than colors.

To finish off the controls I installed the Half Nelson grips. My main reason for the grip choice was the thinner-than-normal diameter and single-clamp design. Made from RaceFace’s own super tacky, durable rubber compound, the pattern is a cool topo map, which doubles as a path to drain away moisture. Coming in at just 92.5 grams a set, these are silly light. Available in all the colors of the rainbow, these are guaranteed to match your bike.

Setting the bar evenly with the clearly anodized marks, I loosely tightened the bolts down so I could adjust the bar once in place. I tend to sit on my bike in riding position and roll the bar into place. Once I got it in place, I torqued down the face plate. I followed the supplied directions and wedged up one side of the face plate so that the faceplate met with the stem. I then torqued the remaining bolts. After that, grips, brakes, and shifters all had to be re-installed. 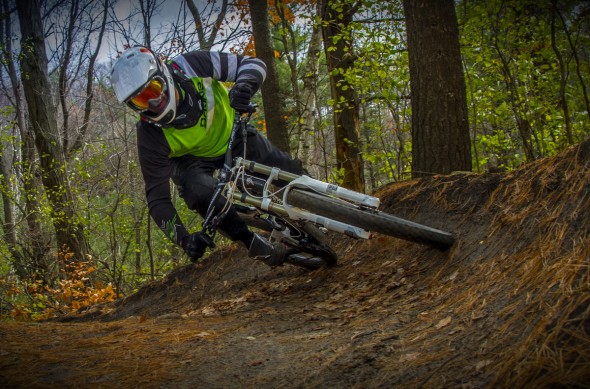 You know a part is working well when it doesn’t call attention to itself. Well, once the Atlas parts were installed, they kept their heads down and just did their jobs. Riding DH through the rocks and jumps of Dagmar, I had no issues whatsoever regarding the bar or stem.

The stem didn’t ping or budge one bit. You would think the 785 mm wide bar would be an issue when weaving through the slopes, but that wasn’t the case. I must admit, I did clip a tree once, though fortunately it didn’t knock me down (I lost a bit of flesh off one of my fingers and took a fist-sized chunk out of a tree). Ultimately the wide bar gave me added leverage, preventing me from eating it by doing a bar spin.

That leads to my next point of interest: I was amazed that, as an alloy bar, vibration absorption was great. I won’t lie–I love carbon due to the fact that it provides the highest vibration absorption possible, but the Atlas did a mighty good job at it as well. It wasn’t quite as good as carbon, but functioned pretty well nevertheless. Rock gardens were not an issue, and going off big jumps wasn’t a problem. Again, landing didn’t call any attention to my wrists, which would suffer if the bar was too stiff.

The Half Nelson grips did a bang-up job at providing gobs of grip in a thin package. I personally love thin-diameter grips, and these are the thinnest that I’ve used to date. Surprisingly the single-clamp design didn’t rotate on me (and I was expecting that to be the case), so kudos for that not happening. With or without gloves, the grips just feel right and may very well become my go-to grip in the future.

So what are you expected to pay for these components? Well, MSRP’s are:

Now those are all MSRP’s, but seeing that JensonUSA sells all of them, I have seen pricing that is very competitive.

A big thanks to the folks at RaceFace for sending down the gear for review. Next up… Atlas Crank review!

I’m digging the topo pattern on those grips.

+1 to that! Singletracks style 😉

Loving those grips as well..Add to that the thin feeling to them.. My new Fav..

Half Nelson is such a fun and flowy trail. Cool grips.

I’m running the Atlas bars with the 65mm Atlas stem and have no complaints with them at all. They’re solid and look great as well.

Good stuff! Good job getting props for this review on the Race Face facebook page!