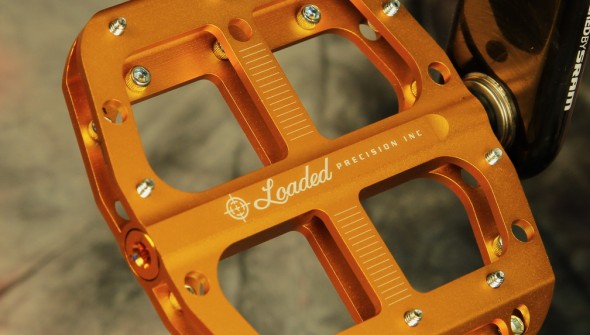 Fresh from Loaded Precision I bring you the new signature pedals and unique-looking AmXc grips!

Loaded has made an appearance on a few of my bikes in the past (Banshee Legend and Amp), so when I decided how I wanted my new V-10 C to look I called up the guys at Loaded and they were happy to send up some choice bling to match the black, white, and gold color scheme I had come up with.

To be totally honest, Loaded can cover just about any bike with red, gold, blue, green, grey, black, or silver. Not only does Loaded give you an excellent color selection, but their component choices are stellar as well. The expanded lineup even covers chain ring bolts.

This time around I was in need of a new set of low-profile pedals and a set of good grips. These are two out of the three contact points on a bike so they have to work! 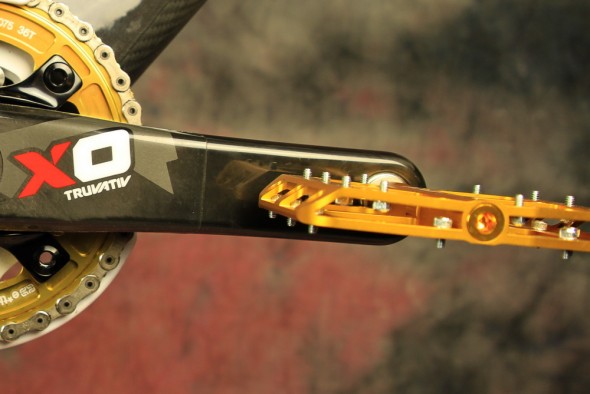 The Signature pedals have been revamped and now come in both titanium-axle and Chromoly-spindle versions. I’m testing the Chromoly version which comes in at an already-impressive 320 grams. (Let’s not even mention the mere 254-gram weight of the Ti version.)

Both pedals share the same aluminum body shape and pin arrangement. With 10 replaceable steel pins per side, these offer up decent traction.

The axle only has provisions for a hex key for installation and removal. This feature keeps the pedal body closer to the crank and allows for a bit more ground clearance when cornering.

The 12.9mm thickness of the pedal really puts your feet close to the axles, while adding a few more millimeters of ground clearance. With the newer DH bikes lowering their bottom brackets, every millimeter counts.

The pedal body rides on two bearings and one DU bushing per pedal. Having two smaller bearings about mid-pedal with a small spacer between them and an inboard DU bushing as close as possible to the root of the pedal should keep things spinning for a long while. 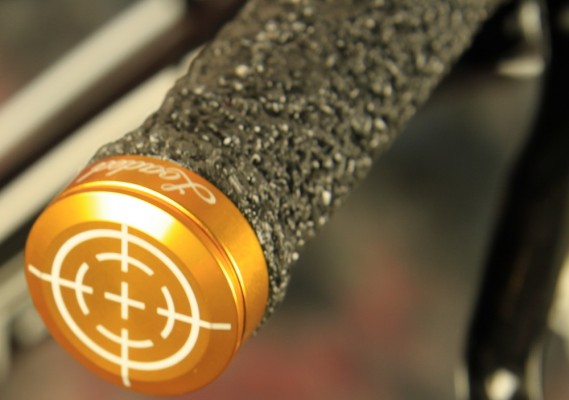 The AmXc grips are something to really get a grip with. Yeah, I said it!

Seriously, these grips do grip exceedingly well. Unlike the majority of grips on the market, Loaded went in a totally different direction with their grips. Starting with their patented new anti-slip compound, they decided on a high grip non-patten, if you will, with almost a deck grip tape kinda look.

Since they have the same colors as the rest of the Loaded product line up, these will help give your bike that finished look. In the package you get locking rings and matching end caps at a competitive price.

For those concerned with weight, these weigh 113 grams a pair.

Out on the Trail: Grips 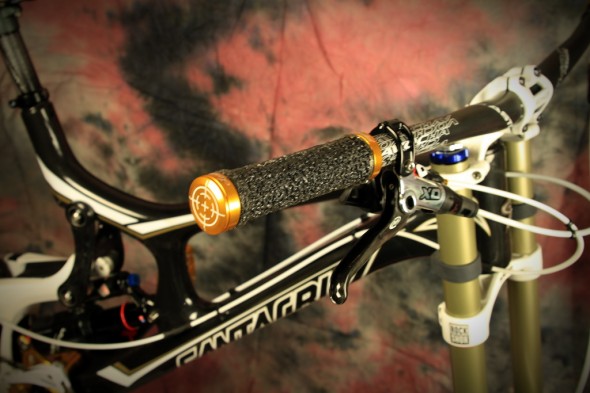 For the $29.99 that the AmXc grips cost, I would say that these are definitely worth the cash!

As advertised, these offered a bunch of grip even when my hands got wet. In fact, one perk that I found was that I could ease up my hold a little bit and still maintain control.

These grips feature a slightly larger diameter than I am used to (typical DH grips are thinner), but despite that I was still liking the feel.

The best part of the grip is that because it has no apparent pattern, there is no wrong way to put it on and no real way of telling if they get worn. As I’ve heard before, “why is that when a grip feels its best it’s the day before it’s totally gone?” Well, these feel great out of the box.

Out on the Trail: Pedals 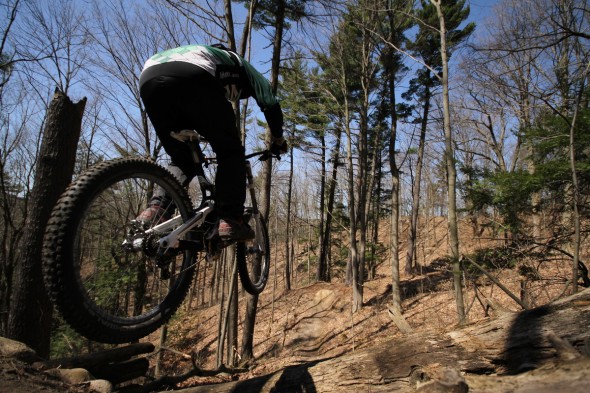 The AmX Signature pedals retail for $139.99, which is a bit pricier than the grips–but they look great.

Overall the pedals worked well and spun great with no instances of running rough. The bearings are sealed behind a sturdy dust cap which really keeps the crud out.

As far as performance, the open design works well at preventing the pedal from clogging.

The 10 pin arrangement worked well, but I was hoping for a bit more bite. Perhaps an upgrade to the pins in the future would further improve the pedal.

The size of the pedal is just right, with a big enough platform that your feet find them with no issues, and not so big that they easily find themselves smashed to bits on every piece of vegetation that is out there.

As for durability, I did have a few close encounters with the ground, rocks, and roots. So far there have only been a few scrapes of the anodizing, but other than that, everything is still working just fine!

Loaded components haven’t let me down yet, and these new parts are working well! Again, I am absolutely loving the grips, and the pedals are pretty good as well. If you have a chance, check out what else Loaded has in store for you.

Thanks to Anthony of Loaded Precision Inc. for sending down the gear for review!

Those grips are pretty unusual but they look like they are super tacky! I gotta try those out…

Yeah a great idea on grips. They do feel great.

They feel great with and without. However, having lost large amounts of flesh around my hand because of riding without gloves, I stick to wearing them.

Those grips look like somthing we had back in the 70’s on our BMX bike’s except these look wayy better.Might have to give em a try as well…

That’s a sweet combination! I like the flats too, love how thin they are. I am interested in longer term results to see how they hold up. Give us a review in a few months?

Those grips are pretty crazy looking!

I also like how close the pedals are to the crank arms. I’m not a fan of flats that stick out another inch or so from the arm.

The pedal is very good looking but it is the most expensive and worst pedal I’ve used. In less than 6 months and less than 100km, the sealed bearings were damaged and shattered inside..