Yes, Fox’s 2015 products have already been released… but do you know what that means? Now’s the time to get a screaming deal on a perfectly-good 2014 fork! 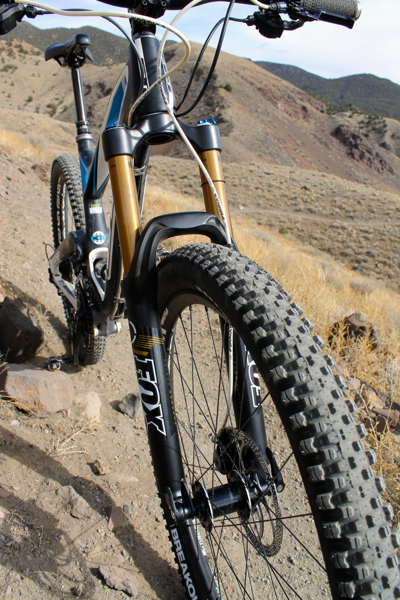 The 2014 Fox 34 TALAS model I have in for review features travel adjust–thus the TALAS designation–and goes from 160mm of travel to 130mm with the flip of a switch. My test fork–installed on my 27.5 GT Force AM rig–features 34mm stanchions, 160mm of travel, a FIT damper, and CTD (Climb, Trail, Descend) adjustment. The TALAS features a 15QR through axle, Kashima-coated stanchions, and a tapered steerer tube. 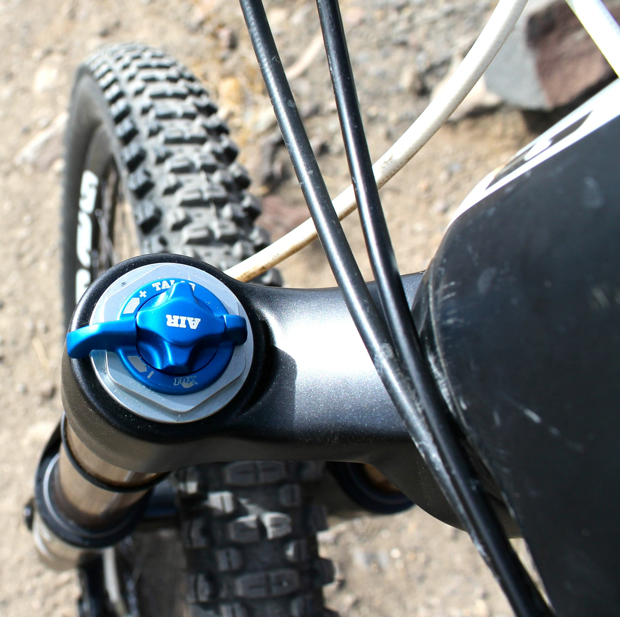 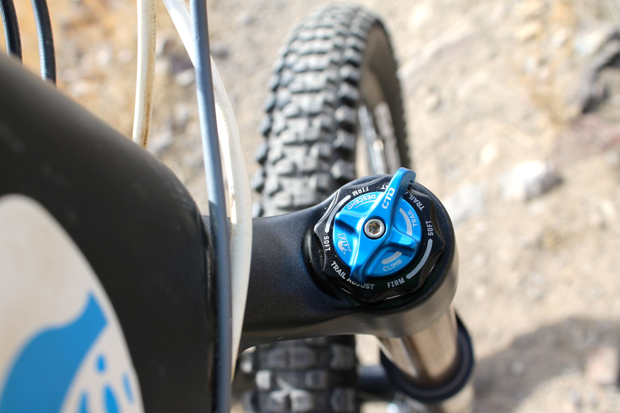 According to Fox, the 2014 TALAS has a fraction of the resistance that their previous travel-adjust forks had. Also, the FIT damper was completely reworked for 2014, and features a “firmer baseline compression damping and a more progressive spring curve.” 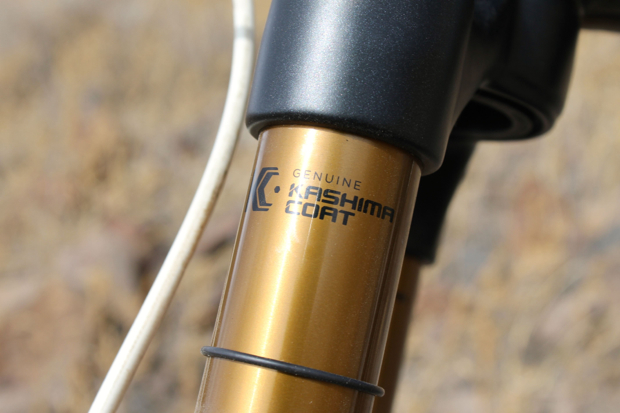 Over the course of my test I’ve logged several hundred miles of challenging riding aboard the TALAS, including racing the Keystone Big Mountain Enduro on ridiculously-rocky descents over the course of two long days. Throughout my battery of tests, I have grown to respect the Fox 34’s highly-adjustable and forgiving nature.

During my test rides I couldn’t help but compare the TALAS to the SR Suntour Auron review fork I had just pulled off the bike. Compared to the Auron, the TALAS wasn’t nearly as plush and supple at the beginning of its travel. Initial impacts and small bumps felt harsher and more jolting, despite experimenting with a variety of rebound settings and air pressures.

However, Fox isn’t fibbing about the progressive spring rate of the new FIT damper: it ramps up exponentially throughout its travel. Despite opting to run my sag toward the plusher end of things, I never ran through all of the TALAS’s travel, even on cased jumps and big (for me) drops. Sure, I got close, and came within 20mm of completely pushing up the O-ring, but in my opinion it’s great to have a little extra cushion there. Thanks to that cushion and the very progressive spring rate, I felt like this fork was capable of tackling huge obstacles and stunts without balking or becoming overloaded. Compared to the Auron, the TALAS’s travel felt much more progressive and confidence-inspiring late in the stroke.

While the TALAS stiffened out and provided great bottom out protection at the end of the stroke and felt a bit harsh at the beginning of the stroke, the fork cycled rhythmically and smoothly through extended rock gardens, tackling each oncoming rock or jump in stride. This allowed me to put my focus where it needs to be: way down the trail.

I found that I wasn’t as impressed with the overall feel of the fork as I was with the Auron–but it in no way felt bad… just not quite as silky-smooth. However, in my opinion, the TALAS’s true beauty is found in it’s highly-adjustable nature.

I’ve written in the past about both Fox’s CTD adjustment and fork travel adjustment in general, and both of those features come packaged together in this one amazing fork. Firstly, the travel adjust features a reduced 30mm of travel, from 160 down to 130. I personally think that reducing the amount of travel on your fork is the #1 thing that can help a really slack all-mountain bike climb better. Not only does it reduce the amount of energy you’re losing from the front end, but most importantly it steepens the head tube angle of the bike. Steepening that head tube angle by a bit over a degree makes the bike track more predictably up climbs with much less wandering of the front end.

Secondly, the super easy-to-use 3-position CTD (Climb, Trail, Descend) settings were a pleasure and performed superbly. I found myself using the climb setting very little since it was a true lockout–but on pavement and smooth gravel roads it was great. I did find myself using the Trail mode quite a bit, but I would almost always choose to dial down the travel to 130mm before opting to go into Trail mode. That said, once in 130mm mode, I found myself cycling through descend and trail a good bit, depending on the situation. 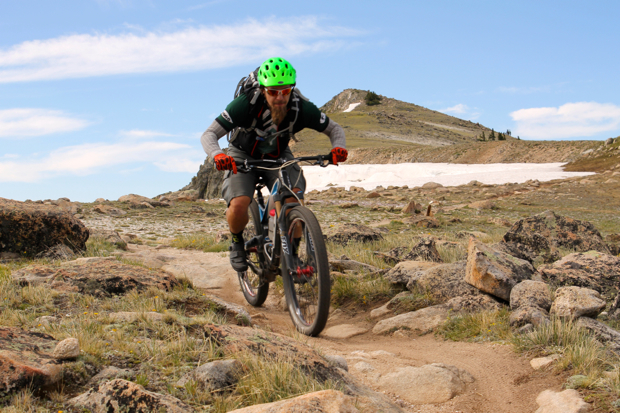 It’s worth noting that while my inclination would normally be to just use the 130mm mode on the climbs and always switch to 160mm for the descents, on rolling terrain or short downhills followed by more climbing, it just wasn’t feasible to switch back to 160 since I’d have to remove my weight from the fork to allow it to fully return to 160mm mode. However, with the fork set to 130mm and descend mode on the CTD, the fork rode very smoothly, just like a stock 130mm fork. In fact, it was so great that on smooth, easy trails with rolling terrain, I just plopped my fork into 130mm mode, my rear shock into trail mode, and rode my big all-mountain rig like it was a much steeper-geo, lower-travel trail bike–and it felt great! 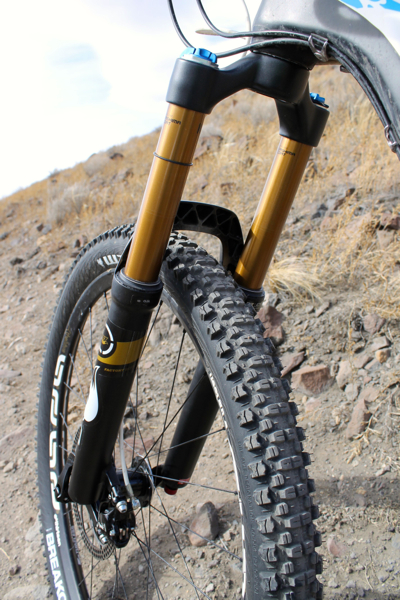 While the beginning stroke on the TALAS wasn’t as supple as it could have been, that’s my only potential complaint about this fork. It tracked predictably and cycled aggressively in the mid stroke and was firm and confident as can be when fully compressed. And finally, the incredible adjustability–with CTD and travel adjust–allow this fork to transform the riding characteristics of a long-travel bike with the simple flick of a switch.

In the end, the reliable performance coupled with superb adjustment mean that this will be the fork I choose to leave on this bike for some time.

Thanks to Fox for providing the TALAS for review.