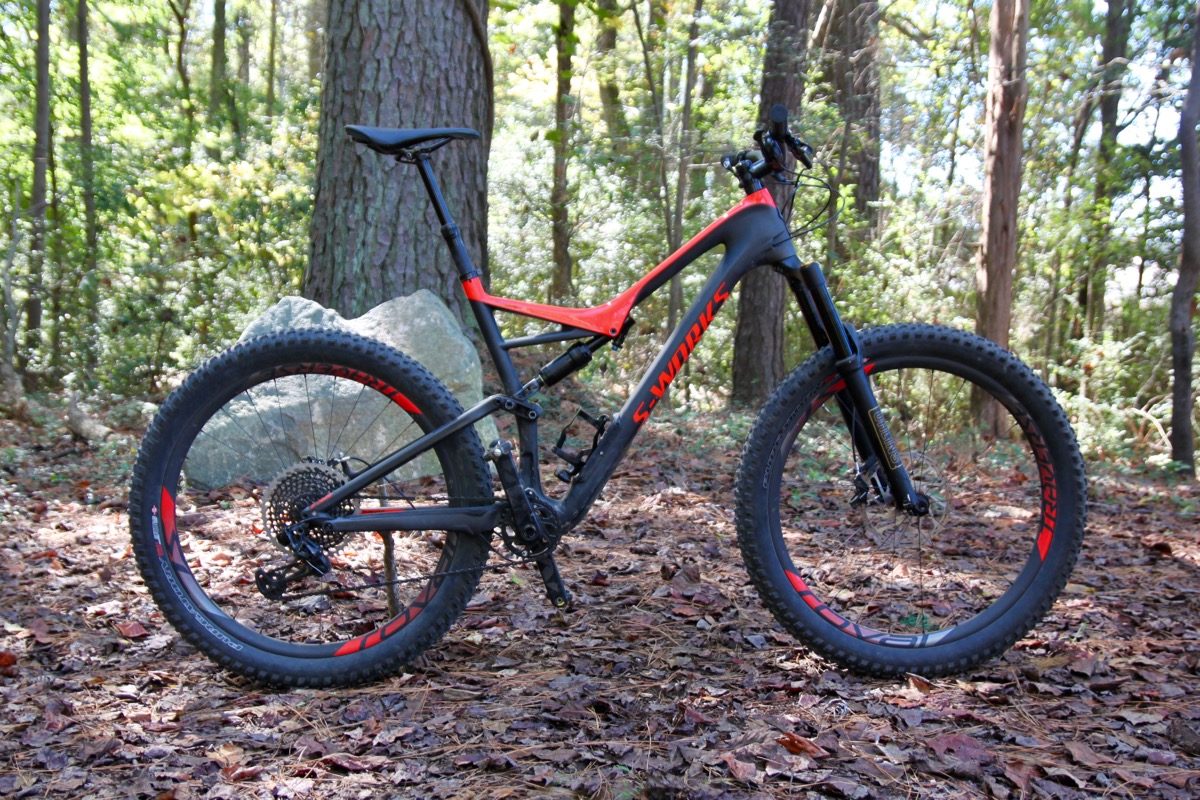 I took the 2017 Specialized Stumpjumper S-Works 6Fattie for a test spin at the US National Whitewater Center in Charlotte, NC last month while testing 5 enduro bikes in 24 hours. Officially, Specialized classifies the Stumpjumper 6Fattie as a trail bike, so it wasn’t included in my comparison test. With 135mm of travel in the rear and a 67° head tube angle, the 6Fattie Stumpjumper is a bit under-gunned compared to pretty much every enduro bike on the market. However, the 27.5 version of the Stumpjumper does have a full 150mm of rear travel, leading some to classify that version as an enduro bike.

So is the Specialized Stumpjumper an enduro bike? Honestly, I don’t know. But I’m convinced it doesn’t matter. 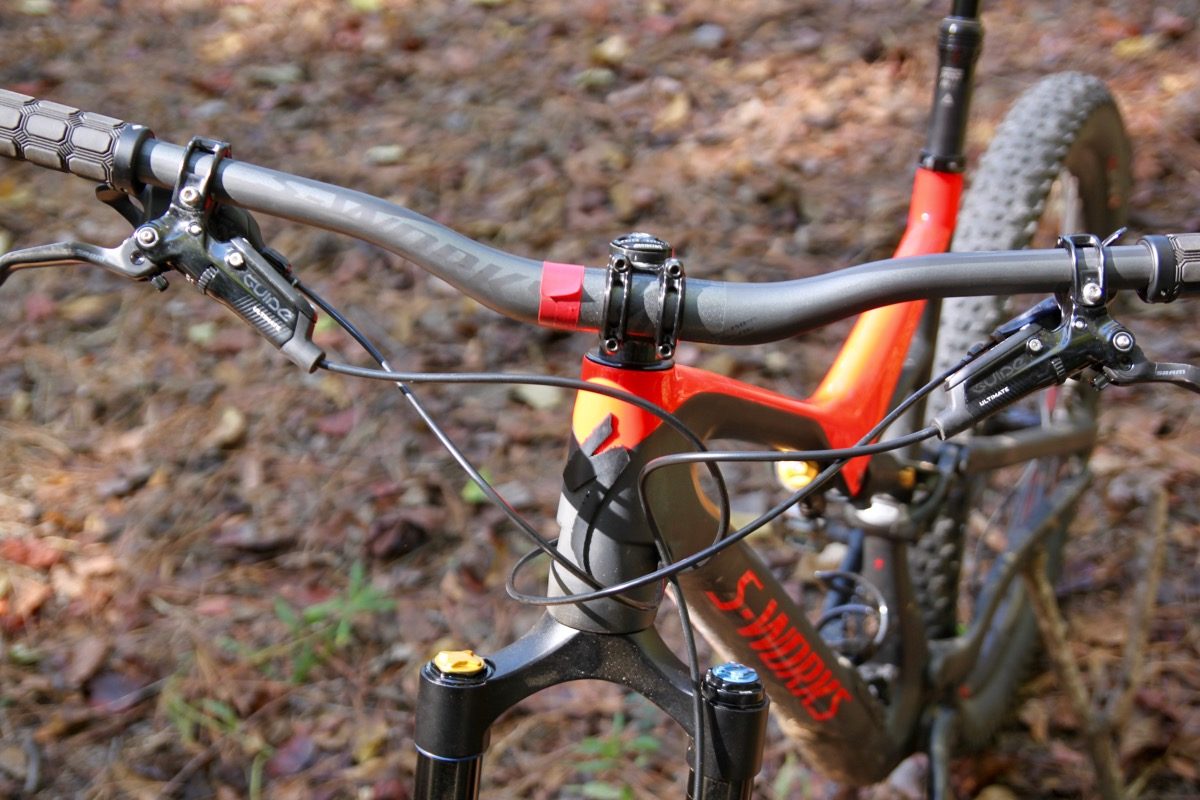 I’ve test ridden several Specialized mountain bikes over the years, and each one seems to have a fairly consistent ride feel: dialed, efficient, and on the racy, firm end of the suspension spectrum within its category. Specialized bikes are always fast, but they aren’t always the most comfortable or, dare I say it, the most fun to ride. Clearly the 6Fattie line is designed to break down that stereotype and run over it with monster truck tires for good measure. 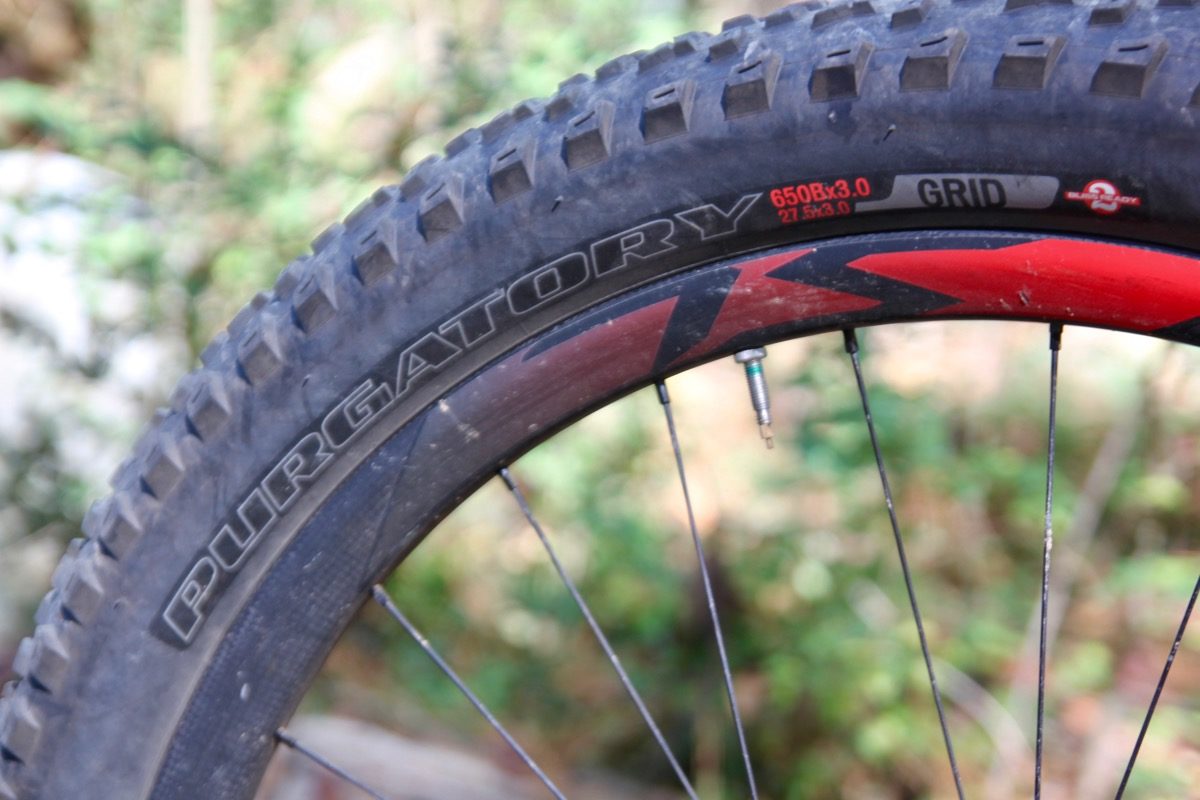 For those who aren’t familiar with the 6Fattie designation used by Specialized, this is a 27.5+ bike, AKA a plus bike. Specialized is insisting on playing off the 650b label that everyone else has dropped in favor of 27.5. The fattie part… well, as best I can tell, that’s just there because it sounds a bit like the “fifty” in six-fify B. Heck, 6FattieB would make slightly more sense, but I digress. The bottom line is, 6Fattie bikes run regular old, 27.5×3.0″ plus tires. 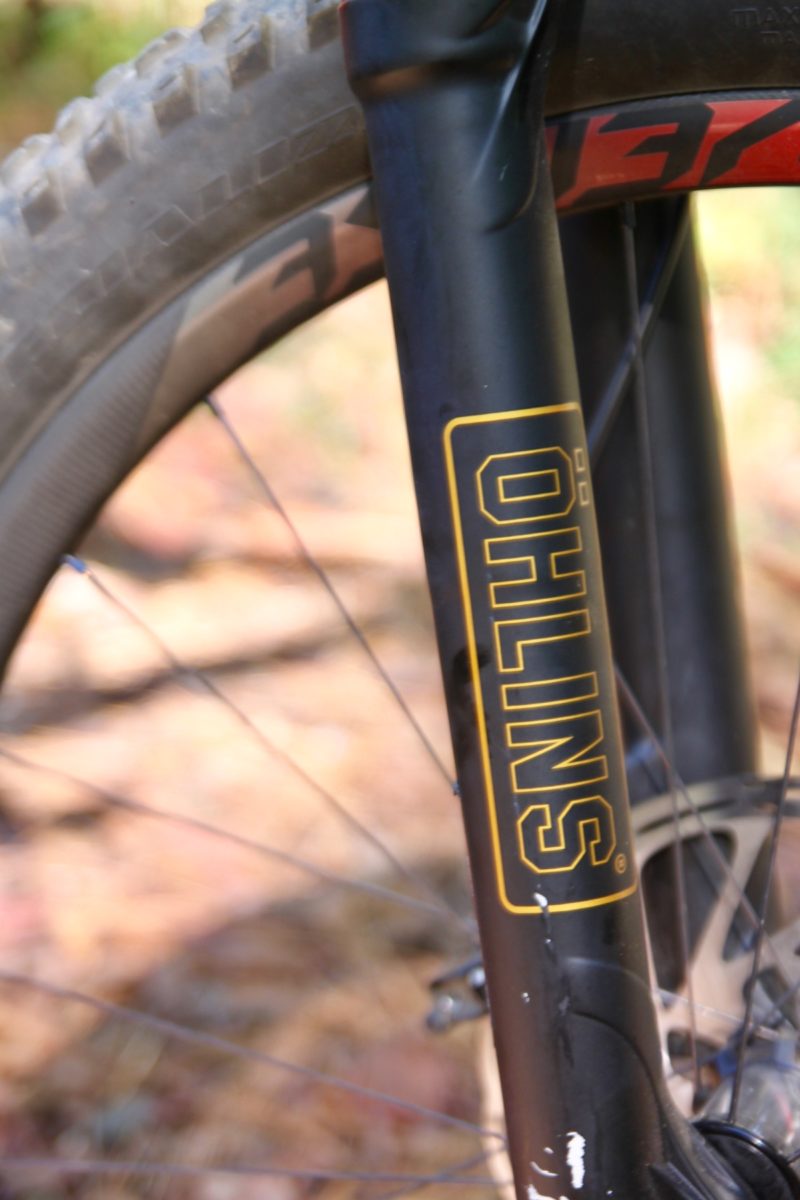 Starting at the front of the bike, the Stumpjumper 6Fattie features a 67° head tube angle and a 150mm Ohlins RXF 36 suspension fork. That head tube angle is right at the average for current trail bikes, while the front suspension is slightly longer than the average trail bike.  Looking more closely at Aaron’s analysis of trail bike geometry, the Stumpy 6Fattie also has a below average bottom bracket height (331mm) and longer-than-average chainstays (437mm).

The frame is full carbon, both front and rear triangles, and features an integrated storage spot called SWAT hidden underneath the bottle cage on the top side of the downtube. 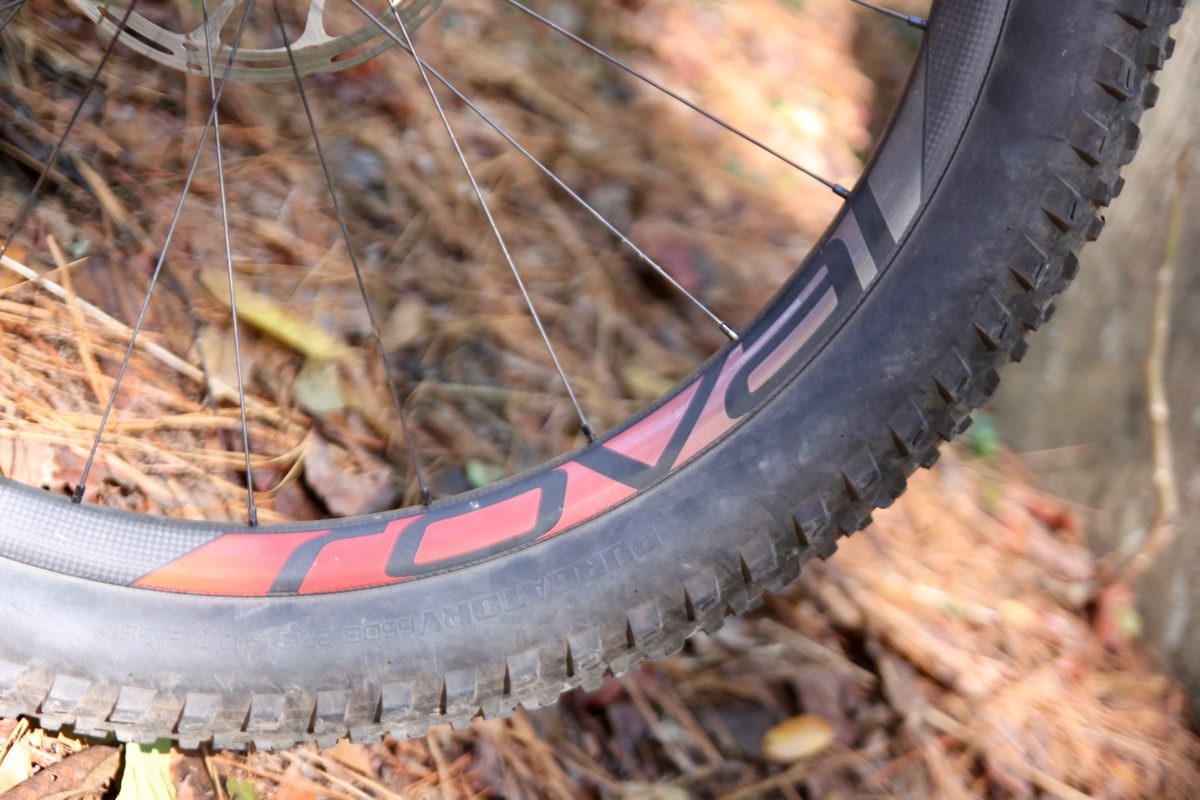 The S-Works build sits at the top of the Stumpjumper line, blinged out with an XX1 Eagle drivetrain, Ohlins suspension front and rear, and 30mm-wide Roval carbon rims. On the XL model I tested, Specialized includes an internally routed, 125mm Command dropper post. The carbon handlebars are Specialized-branded, as are the grips and Purgatory tires.

Before heading out on the trail, I adjusted the rear suspension on the Stumpjumper using the Auto Sag feature. Sure, setting sag on a rear shock isn’t a difficult thing to do, but after riding several other bikes during the event, I really appreciated the quickness and ease of setup offered by Auto Sag. Throughout the ride the suspension felt dialed, more so than on some other bikes I tested, which makes me think it actually works really well. 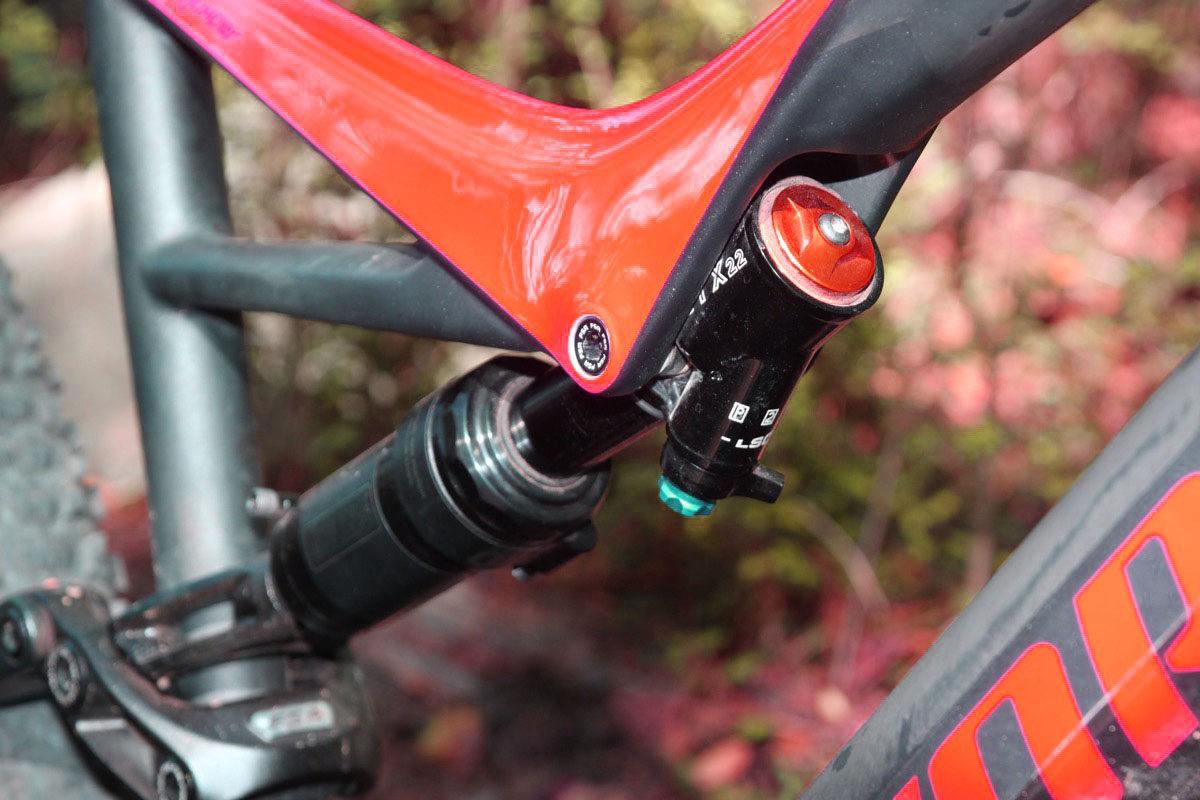 The other setting I adjusted–the seat height–was a cinch too, thanks to another Specialized-exclusive feature: the SWAT tool. I always carry a multi-tool with me, but it’s generally stuffed inside my pack, which means it’s a tiny pain to access. But on the Stumpjumper I tested, a small multi-tool was tethered to the frame right at the water bottle cage. All I had to do was reach down and grab the tool.

From the first descent on the trail, I could tell the Specialized Stumpjumper 6Fattie was different from all the other Specialized bikes I’ve tested. Instead of a sterile, exacting, and precise ride, I got a sense of easy-going messiness, with a hint of rowdiness lurking beneath the surface. In the voice memo I recorded after the test, I kept remarking on how plush the bike felt through everything, from chattery root bumps to log lifts and dirty kickers. 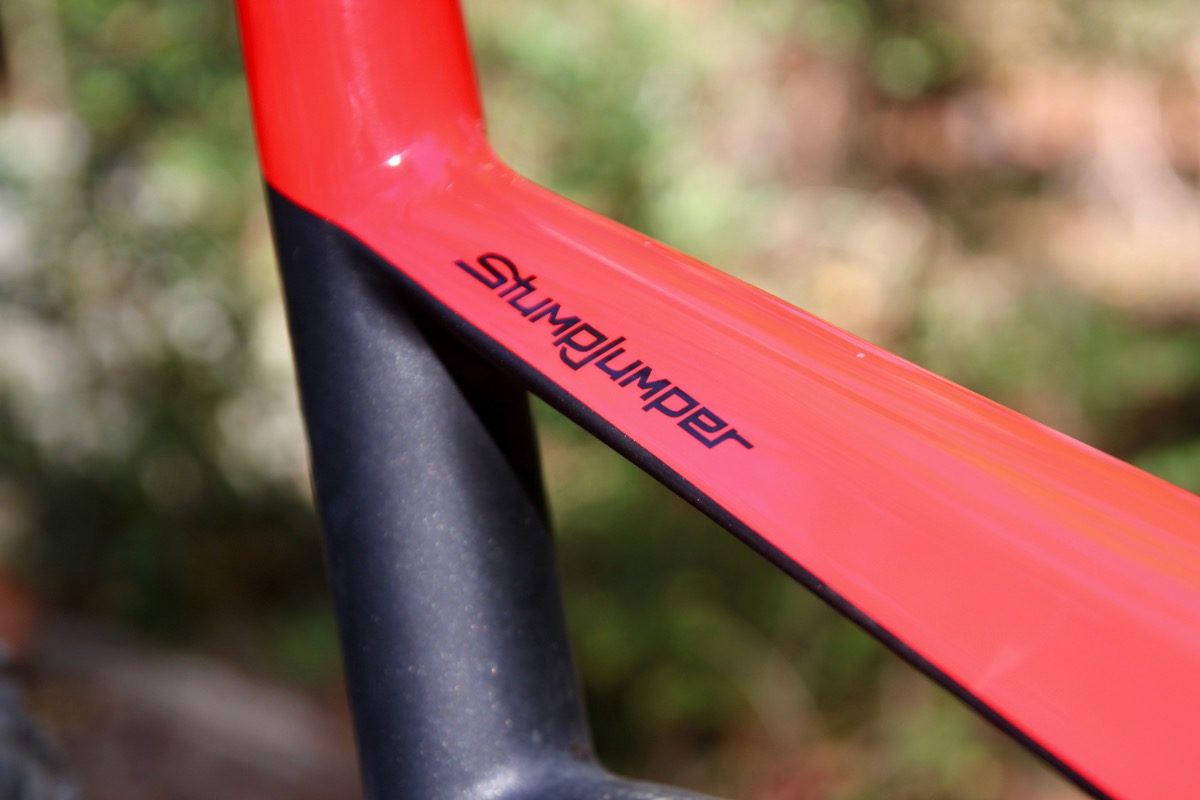 It would be easy to say that the plush feeling is due to the forgiving 3-inch tires on the Stumpjumper 6Fattie, but I think that’s only part of the story. The Ohlins suspension, both front and rear, works incredibly well, and is one of the most responsive suspension systems I’ve tested.

As you can see in the animated photo above, I had no problem navigating tight switchbacks on the Stumpjumper 6Fattie, despite the big wheels and the semi-longish chainstays. Cornering felt great, as did airing out small jumps. In a word, the Stumpjumper S-Works 6Fattie is fun, no question about it.

But the Stumpjumper 6Fattie is a trail bike, so I had high expectations for its ability to climb hills and pedal along the flats. Not only that, it’s a Specialized, which just ups my own expectations even further. Fortunately the bike didn’t disappoint, and felt nearly as stiff and efficient as any Specialized bike I’ve tested. And the plus tires didn’t seem to slow me down as much as other plus bikes I’ve tested, thanks to the low rolling resistance on the Purgatory tires. 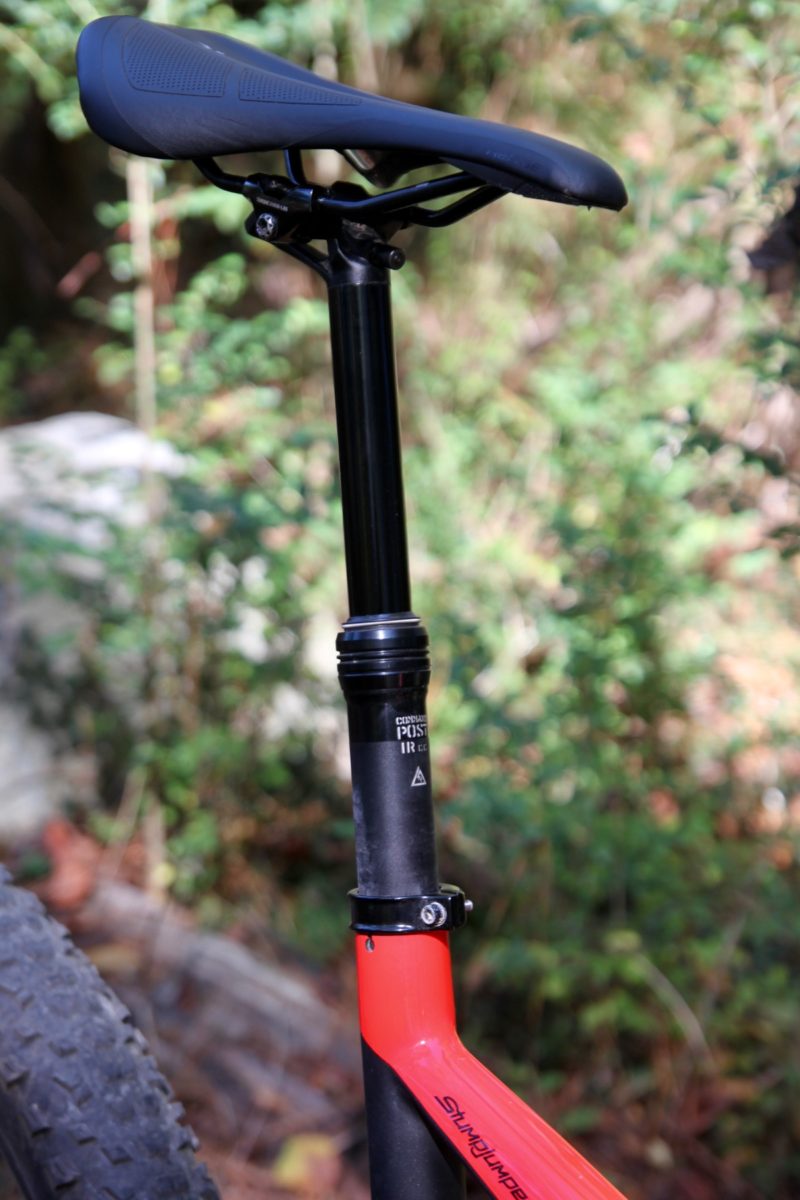 The Command dropper post was another bright spot during my test. I found the post to be particularly notable for the solid feel and the quick return with every push of the lever.

Ok, so now the bad news: the good times are going to cost you, $8,200 USD to be exact. From the overall design and geometry to the frame and the components, everything on this mountain bike is top-of-the-line. One bit of good news is the 2018 model price of $8,200 is actually $300 less than it was when this bike came out. Savings!

If you’ve been scared away from Specialized bikes in the past because they’ve seemed too racy or too serious, a 6Fattie model, like the Stumpjumper S-Works 6Fattie, might just change your mind.

As a former Specialized guy, I’m sure the S-Works fattie is a damn fine bike, but for that money? I find it hard to believe that it’s “better” than some of the $5,000 bikes available out there. But then again, I’ve never ridden an $8k bike. Guess I’m scared to because “what if” it really is? That’d be a tough sell to the wife. I’m still in marriage debt for my current bike.

So Jeff, I have not ridden a Specialized Enduro, but always seem to have my eye on the various models and years. Would you say that Enduros also fits your general description of Specialized mtbs?

I haven’t ridden the Enduro so I couldn’t say. It’s definitely on my to do list!

The Specialized bikes I have ridden include the Epic, Camber, and older models of the Stumpjumper. Those test rides form the basis of my Specialized stereotype. 🙂

Hey mongwolf I own a 2015 Enduro 27.5 and it is very fast, planted and smooth over absolutely any terrain. I regularly DH with it. But yes, it does have the typical “racy” feel as Jeff put it. However, it is also a very “flickable” bike due to the short chainstays. But yes, for me, it is about the most fun bike ever, but for other people, they say it doesn’t feel as “fun” as their bikes. I love every thing about my Enduro, but it is not for everyone. Fast and smooth and quick in every way is the Enduro. But not necessarily a big laugh of a bike either.
I’m a Specialized expert and connoisseur, and I hope this helps. If you have any other questions ask!

Hi Jeff, how tall are you?
I have XL Comp carbon… was stuck in between sizes (185cm tall) L felt cramped

I’m 6’3″ and the XL fit great. In the past I would ride large bikes in certain models just because they made handling a little easier. But now with dropper posts on every bike, I go for the bigger size and drop the post when I want to be more nimble.