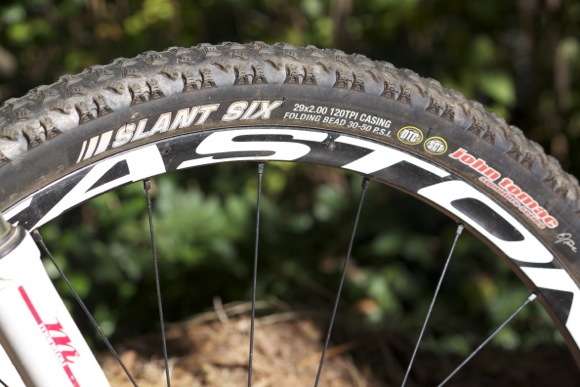 Ask any rider which tire comes to mind when you mention the Kenda name and they’ll probably name the Nevegal or Small Block Eight–or both. So what would happen if you could combine these two favorites into a single, super tire? Would the sum be greater than the parts or would it end up an inbred mutant? Read on to find out.

I tested the tubeless-compatible 29er version of the Slant Six which is currently only offered in a 2.0 width (50-622 ETRTO). I was a little concerned about the narrow width since I’m used to running at least 2.2s on my bikes but once the tires were aired up they didn’t look that much skinnier than what I’m used to. Once I got on the trail I found they felt more than burly enough for the terrain I ride. These tires weigh 788 (±39) grams which is pretty heavy, especially for such a narrow tire. I would describe the mounted profile of this tire as round as opposed to square. 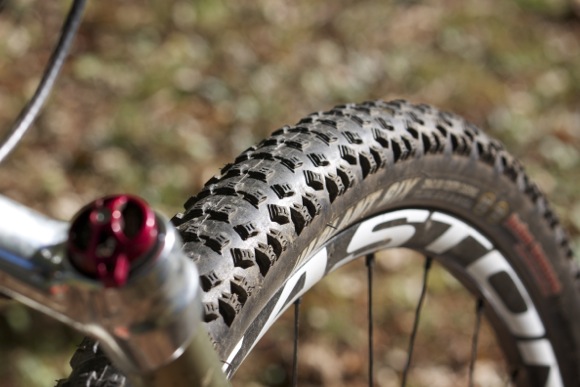 Most flavors of the Slant Six feature a Kenda-specific dual-compound design that utilizes a stickier rubber on the corner knobs for improved grip in the turns. Why not use the sticky stuff on the center treads too? It wears out more quickly, diminishing the life of the tire. That is, unless you’re riding in circles all the time.

At the moment Kenda doesn’t offer many tubeless 29er options so I was stoked to see the Slant Six available in an “SCT” version, the company’s tubeless compatible designation. With a little high pressure air I was able to mount these with Stans on my Easton Haven wheels. This was actually the first set of tubeless or UST tires I wasn’t able to air up using only my floor pump. I don’t think there’s any conclusion to draw from this–the tires have held air just as well as any other tubeless tire I’ve owned.

Where the rubber meets the trail

Kenda says the Slant Six is designed for intermediate to hard pack conditions and I would say that’s a good description for where this tire shines. Unlike the Small Block Eights, these tires didn’t wash out in looser conditions, though I wouldn’t quite give them the “all rounder” label afforded to the Nevegals. Still, I had no problem climbing over damp roots or generating sufficient traction on ultra-steep climbs at Aliso and Wood Canyon. The Slant Sixes were pretty useless on very sandy trails but then again, most mountain bike tires are.

I also wanted to test Kenda’s claim that the Slant Sixes are “designed for speed, grip, and cornering assurance.” On the trail, I found these tires very fast; the sheer number of knobs give this tire very low rolling resistance. Grip? Check. The short knobs don’t look like they have much bite but I found myself surprised at how well they clawed their way up steep and loose terrain. 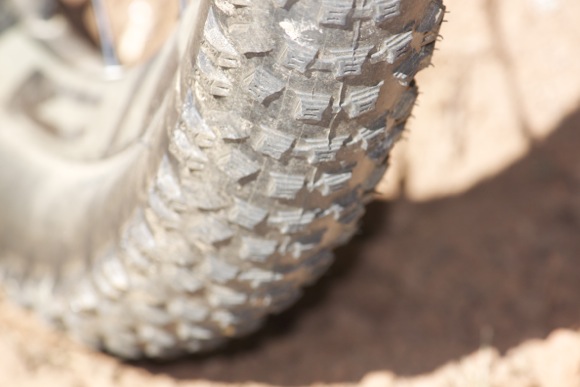 Now, as far as cornering assurance goes I have to say I think this tire falls a bit flat. The round profile of the Slant Six makes for a pretty smooth transition from the center knobs to the cornering knobs but wait–all the knobs are the same shape, just at a different angle. I never felt much (any?) additional bite from the tire in corners and was cautious about how far I could push things sideways. In corners the lack of rolling resistance was apparent but this time in a side-to-side direction.

I ran this tire both front and rear in my tests and honestly it worked well in both positions. If I had to choose to run this tire only front or rear, I’d probably go with the Slant Six in the back.

Thanks to the folks at Kenda for providing this tire for review.

Gear
Upside Down MTB Fork Advantages, According to Pablo from Bright...
Progression
Be a Pilot Not a Passenger: A Short Guide to...
Trails
The California Mountain Bike Coalition: A Squeaky Wheel for Trail...
Trails
East Bluff Bike Park in Copper Harbor Plans to Offer...
Subscribe
Login
Please login to comment
7 Comments
Most Voted
Newest Oldest
Inline Feedbacks
View all comments

I recently put an additional 30 miles or so on a pair of these tires out at Aliso & Wood in Laguna Beach, CA. In sand over hardpack, these tires did well but the general consensus was they work best as a rear tire. Very fast!

“But hey, if this tire was closer to the Nevegal than the Small Block Eight, Kenda would’ve called it the Fast Four or the Terrific Two, right?”

Are the tires directional or can they be mounted in either direction?

The tires are directional.

May be just what Im looking for. I Love the small blocks for the speed and the nevegal for the grip but they are too heavy..

Holy cow they’re heavy!!! My 2.55″ wide Weirwolf LT is a lighter than these!!! No surprise they didn’t air up with a floor pump, they’re not not UST tires and you mounted them on UST rims. Some tubeless ready tires will mount up on UST rims easily (Specialized tires do at least), but not all. The Small Block 8 used to be one of my favorite tires, but until they come out with light weight tubeless ready version, well, they’re competition is just too far out from.

I have the 26 x 2.1 UST front and back. They have been great and are fast. I could see a nevegal in the front for better control. I may give the Bontrager XR3 a go next time. But I would not hesitate on the slant 6 again.

Ran a slant 6 on the rear for 3 rides here in wet, muddy, rocky and rooty MD and just had to go back to the Nevvy. Especially with the leaves down like they are now. Not enough bite in the wet stuff, and I didn’t quite trust them at high speed cornering. Probably great in the dry stuff though.