I was extremely underwhelmed with the stock tires that came on my Bike Nashbar Big Ol’ Fat Bike, so I emailed Origin8 to see if I could test out some of their new Devist-8er Ultralight tires… and I’m so glad I did! 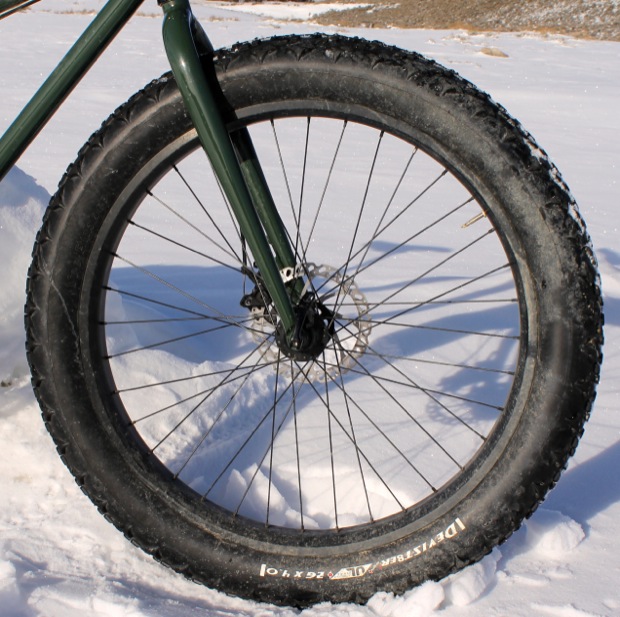 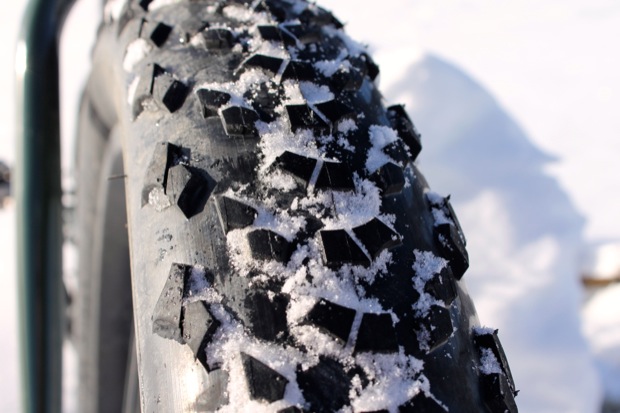 The Devist-8er Ultralight (UL) tires sport a medium-depth, directional knob pattern with plenty of space between the knob rows. This 26×4″ folding tire weighs in at a claimed 1430g ± 60g, with my tires weighing in at 1420g and 1460g each. Despite being a solid 400g lighter than the standard Devist-8er tires, this still isn’t the lightest fat bike tire on the market. 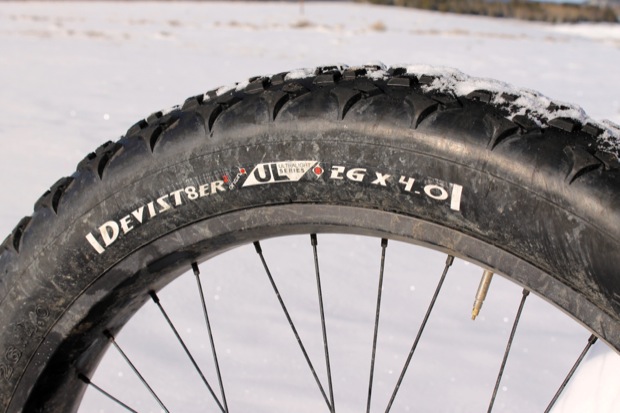 According to Amazon, the list price for these tires is $110, but expect to pay more in the ballpark of $57-$65, depending on where you get them. For that price, with many Surly tires ranging from $120-$150, the Devist-8er UL is a real bargain!

I’ve tested the Devist-8er ULs in a variety of conditions, ranging from fresh powder to packed snow (and everything in between), to slush, mud, dry dirt, gravel, and more. In all cases, I found these tires to roll great! However, it’s crucial to pick the right tire pressure for the conditions. 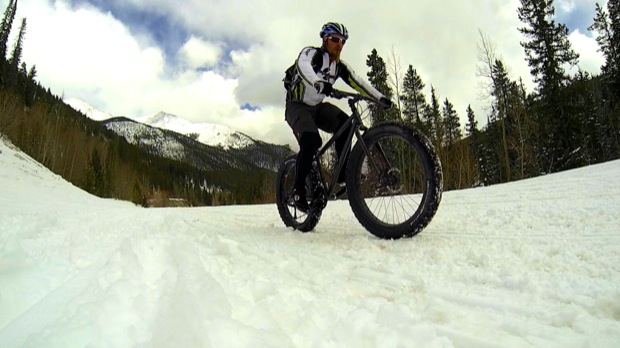 When rolling on snow and other soft surfaces, I was able to drop the pressure on the Devist-8er ULs super low. I haven’t pushed the envelope as far as possible, but I had good success running 4-6psi on snow. Thanks to the large knobs and the space between the knob lines, these monstrosities really dig in to the soft stuff, offering great purchase. The way the lines of knobs have large open sections in between remind me a bit of paddle tires on dirt bikes, designed for sand dune riding. While this tread pattern isn’t nearly that extreme, I think the same principles are still at play in soft conditions.

This also makes these tires great in mud, but if you’re doing a ride where you might encounter a mix of mud, dry trail, and maybe even snow, you could consider running a slightly higher pressure of about 8psi.

Thankfully, that space between the knob lines isn’t detrimental in non-snow conditions. In fact, on dry dirt, these tires hook up well and handle very predictably. Rolling speed, with the right tire pressure, is just fine. The one thing I did note is that, when running low pressures around ~6psi on hardpack, these tires tend to bite hard to the inside of a turn with even just a little turn initiation. To remedy that issue, I’ve been running about 10psi on dry singletrack, and it’s given me good rolling speed and more natural steering, while still offering good traction and a decent bit of shock absorption when hitting trail obstacles. Once the tire pressure is set properly, on regular singletrack this tire handles and corners predictably, just as you’d expect a regular mountain bike tire should!

In short, the Devist-8er Ultralight is a reasonably-light fat bike tire that can be found for less than half the price of some big-name fatty shoes, and it offers great traction in soft conditions while handling like a normal mountain bike tire when it’s on dry singletrack. Really, now: what’s not to love!?

Thanks to Origin8 for providing the Devist-8er Ultralight tires of review.

What is your opinion of the origin 8 tsunami 26×4.0 tire. Is it as good as the devis8er