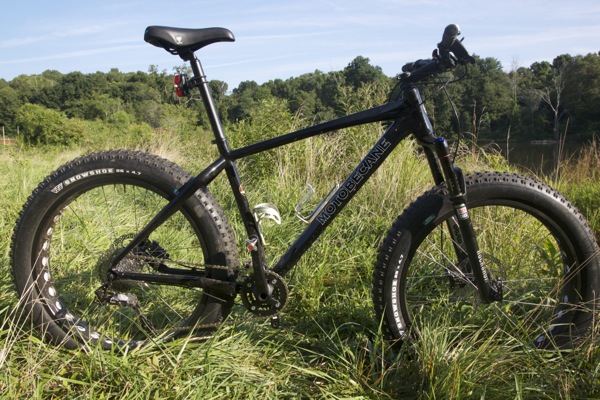 The fat bike is a victim of stereotyping. It seems like whenever someone asks about fat bikes, the response is usually “oh, those are for riding in the snow.” Slightly more knowledgeable riders also like to throw in that fat bikes are good for sand too, but let’s be honest: sand is pretty much just dry snow. While it’s true that fat bikes were born out of a need to improve riding in snowy climes like Alaska, the true potential for fat mountain bike tires is much, much greater.

That’s the way one of the reps from Salsa described fat biking to mudhunny at Sea Otter this year, and it’s totally true. On a fat bike, rock gardens suddenly look less intimidating and everything becomes much more rollable. I’ve been riding the Motobecane NightTrain Bullet for several weeks this summer, and I’ve found I can clean everything on my local trails with ease, even lines I regularly avoid on a normal mountain bike. The wide tires are super stable, even in dicey sections, as they smooth out rocks and roots that jar riders on standard mountain bikes.

For this reason, I really believe fat bikes are a good choice for beginning mountain bikers. Sure, there is a weight penalty over a regular mountain bike, but if you’re just starting out, you don’t know that yet. All you know is that the fat, squishy tires are easy to balance and cushion you against bumpy roots and rocks.

The majority of fat bike riders run rigid forks and claim there’s no need for suspension, though this summer fat biker begs to differ. Sure, in packed, smooth snow a suspension fork can be heavy and inefficient, but if you don’t want your fat bike sitting in the shed all summer, I say put a Bluto on your rig! 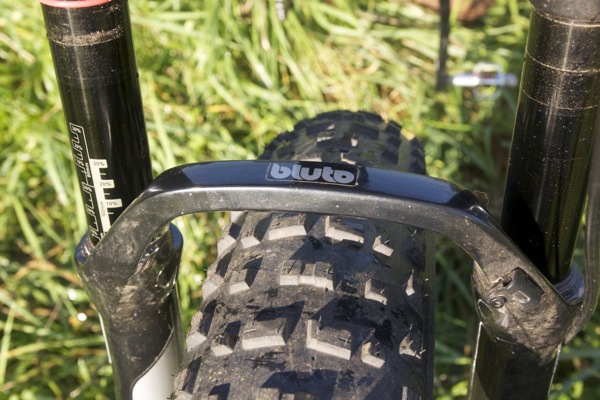 Some will argue fat bike tires act like suspension, but this isn’t true at all–tires don’t rebound or compress anything like a properly-tuned fork. The RockShox Bluto features a lockout so you can lock the fork for snow rides in winter and unlock in the summer to tackle rock and root gardens. In my testing, running the NightTrain with the fork unlocked makes a night-and-day difference compared to running the bike rigid. I haven’t had a chance to test a full suspension fat bike yet, but I truly believe there is a place for a FS fat bike, particularly as a 4-season rig.

Winter fat bikers love to brag about how low they run their tire pressures, and pressures as low as 4psi seem to be popular. In the summer, however, I like running higher pressures, and lately I’ve been at around 15psi. Remember, a suspension fork should smooth out the bumps up front, not the tire, and higher pressure allows you to roll more efficiently. In fact, even at such “high” pressures I managed to pinch flat on a recent ride while attempting to ride up a set of stairs. To be fair, I wouldn’t even attempt this on a regular mountain bike, but the fat bike just makes it so tempting!

We don’t need no stinking trails

One of the things that excites me most about summer fat biking is the potential to ride my mountain bike anywhere I choose to explore. The wide tires have no problem rolling through seasonal overgrowth, sticks, and leaves, effectively blazing a path as they roll. This comes in handy for riding around down trees in the trail and following sandy, rocky creek beds and shorelines wherever they may lead.

Most mountain bike trails tend to avoid particularly sandy areas, and with good reason: mountain bikers have a hard time steering and getting traction in sand. Riding a fat bike through your average sandy stretch isn’t a problem: the bike basically turns at will and keeps its momentum easily. I have found there are some places where the sand is just too deep or too loose, even for a fat bike, though this is rare.

Fat bikes are incredible… but they’re not invincible

Before going into some of the limitations of fat bikes on summer trails, let me say that I could see myself riding a fat bike as my primary, year-round rig. These things are just that versatile, though like all mountain bikes, they don’t do the riding for you!

Through rapid fire corners and turns, fat bikes just don’t handle all that great. My theory is this has something to do with the momentum of the wheels, but tire pressure (and the corresponding tire profile) also plays a role. Basically fat bikes are really good at holding a straight line, but they put up noticeable resistance when you want to make turns at speed (which lends credence to the idea that it’s a momentum thing). Low speed turns are usually no big deal, just a little stickier since you have a larger contact patch on the ground.

On pavement, if the buzzing sound from your knobby fat tires doesn’t drive you crazy, the rolling resistance will. Interestingly, hopping off the pavement onto a dirt shoulder actually feels faster and easier, though I have no data to back this up. So keep the fat bike off road!

Fat bikes don’t have wings and therefore they don’t usually lend themselves to getting air. Even the lightest front end will have more weight than a comparable “regular” bike, so getting the wheel up and over logs takes a bit more effort. Still, it’s not something fat bike riders can’t get used to.

Other terrain: Riding railroad tracks is just as bumpy and annoying as it is on a regular bike, though the bouncy tires almost seem to amplify the effect.

If it sounds like there are a lot of places fat bikes fall short, remember: fat bikes are superior in snow, sand, rock gardens, mud, overgrowth, and roots. For flow trails, there really isn’t an advantage to running a fat bike, though you can probably go nearly as fast with a little extra effort.

I’m personally sold on fat bikes as excellent all around mountain bikes that are suitable for almost any terrain you can throw at them.  You may not always be the fastest on a fat bike, but you will stay on your bike long after your friends start to dab!

Have you had a chance to try the newest offerings from Borealis? They are claiming that the new Echo weighs in around 26 pounds which to me sounds more than shred worthy!

I demoed a bunch of fat bikes last winter of which the Borealis Yampa was one. It did indeed come in at about 26#. The Borealis guy had one that was fully dressed up with lightweight parts, including carbon wheels, which he claimed to be just a smidge over 22!

My fave, though, was the Salsa Beargrease, which seemed positively sprightly as well as sturdy and substantial.

Tire size can make a huge difference. Most fat bikes now can take up to 4.8 or 5″ tires, but you don’t have to put tires that wide on them. There’s a major difference between a 3.8 and a 4.8 in terms of rolling resistance and cornering. There’s a tradeoff between stability/squish and speed/agility. I like the 4.8s but someone who still wants a spry bike can find a happy medium on the 3.8s

I have now had the Fatboy Specialized for about 2 months. It’s my only mountain bike and I love it. Demoed a bunch. Great on climbing hills and its a workout. Love this thing. Best bike I’ve owned.

Downfall is that everyone wants to stop you and chat about those tires :)/ They are pretty pricey too

My daughter has a 9:ZERO:7 that she railed downhill at Winter Park! Granted she pushed it to it’s limits…but it performed and performed great. Weight of her bike with a carbon fork 27.5lbs, so jumping was a breeze…and for just over 2k is the best deal going…that’s why I ride and build them 🙂