With fat bikes taking the market by storm, it is only natural that some races develop around the platform. Even USAC is getting in on the action with a “Fat Bike National Championship” in February.

Here in Colorado there have been a few fat bike race series over the last several years, but with venues as far-flung as Leadville and Crested Butte, it’s a bit of a commitment for weekend warriors from the Denver area.

Seeking to change that and bring some fat bike racing action closer to home, organizer Jim Simons, in conjunction with the Winter Park Nordic Club, has created a four race series that is accessible to Front Range participants as well as the exploding fat bike community in Grand County, CO.

The primary goal of this race series is to showcase Grand County winter fat biking on much of the same singletrack utilized by the Epic Singletrack summer race series. To help facilitate this, courses are a mix of wide XC Ski trails that feed into groomed singletrack. To create that magical singletrack in the snow, volunteers conduct grooming on a “Timbersled,” which is essentially a really skinny snowmobile with a single ski. This allows access into areas too narrow for a traditional snowmobile, and results in a 24″ wide groomed track.

The first race of the four-part series took place on Sunday, January 25th, with the start/finish area right in downtown Winter Park. I was fortunate enough to be able to participate, so read on for my impression of the event.

A year in the making, organizers were still not able to secure all of the necessary permits for a full-blown race, but permission was granted for an “exhibition” event. As such, there were no registration fees, but also no awards or trophies. However, there were official number plates, and riders provided their own timing via the Strava app.

Rider registration was handled via the Meetup.com website, and volunteers were available onsite for check in and and the racer info meeting. Use of the town park meant full bathrooms and an outdoor fireplace for pre and post-race comfort. Parking was adequate, and everything helped contribute to a smooth start to the event.

Without partnership from the Town of Winter Park and the Rendezvous Community, the race would have been over before it started. Power World Motor Sports provided the Timbersled groomer, and 22 Bicycle Company from Glenwood Springs was on hand with hand-welded aluminum and titanium fat bikes for free demo during the race. (Bonus: they also had cans of PBR.)

The race began with a mass start on the street behind the park. Riders self-organized into expected performance levels and headed out at 1:30pm sharp.

After about 50 yards of pavement, the course turned left onto groomed XC ski trails maintained by the town. About 10 feet wide, this section led into a fairly steady climb for a couple of miles, allowing plenty of room for riders to spread out before hitting the singletrack. The singletrack traversed some rolling landscapes with moderate climbs punctuated with short, quick descents, before a pretty long flat section on the “Ditch Trail.” (There was a section a number of us skipped, more on that below)

The singletrack eventually gave way to the same groomed XC trail that we started on, but farther in from where we branched off. Some more climbing further thinned the herd before the bomber descent back to the start/finish.

The course was well-marked overall, with the exception of one confusing sign near the end that sent a bunch off us on a sweeping tour of the Rendezvous subdivision and downtown Winter Park. It was unclear whether a sign was knocked over/missing or just placed poorly, but volunteers were genuinely concerned when they saw a bunch of us come in from the wrong direction, and they made note of the issue for the next race.

The day of the race arrived warm, in the mid-thirties, and the sun came out in full force right before the 1:30pm start. The result was a fast deterioration of what had been beautifully-groomed, snowy singletrack. The XC trail system was fine, due to a more solidly packed base, but after the first few riders traversed the 24″ wide section it just fell apart, leaving the rest of the field to push our bikes while postholing and cursing. This sucked up so much time that a group of us short-cutted the course via the Ditch Trail in order to avoid venturing farther into the softened snow.

Singletrack sections sufficiently shaded from the sun were amazing and very rideable, so I’m confident that without the sudden warm-up and sun the whole trail would have been fast and extremely fun. Since ambient temps are so unpredictable in the Colorado mountains, I think that a start time earlier in morning might be a good way to ensure the groomed snow is up to the task of 75 or so fat bikes chewing it up. To address this issue, the remaining races are now scheduled with 5:00pm or 5:30pm start times.

Despite the disappointing snow conditions, the race itself was well-organized, well-attended and an eye-opening experience for me personally. I already have the rest of the series marked on my calendar and I’m pumped to explore some more snowy Winter Park singletrack! 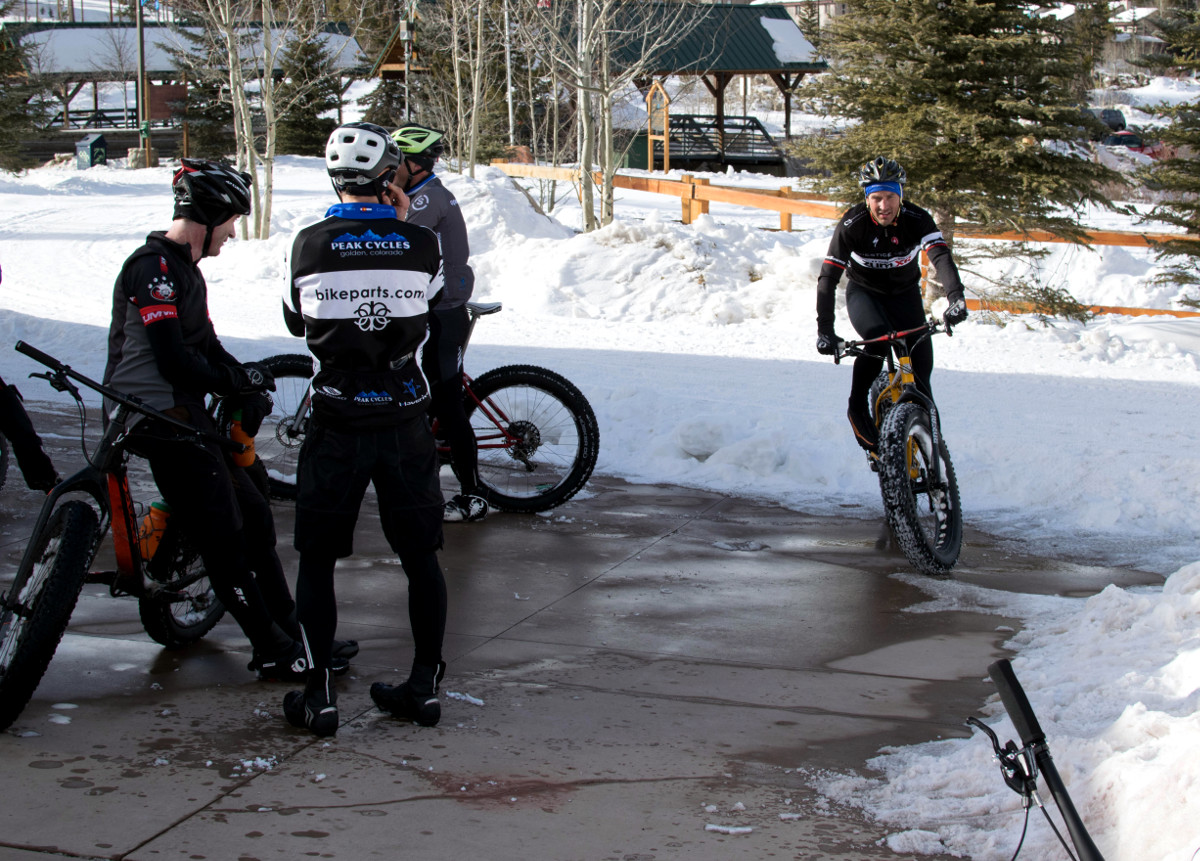