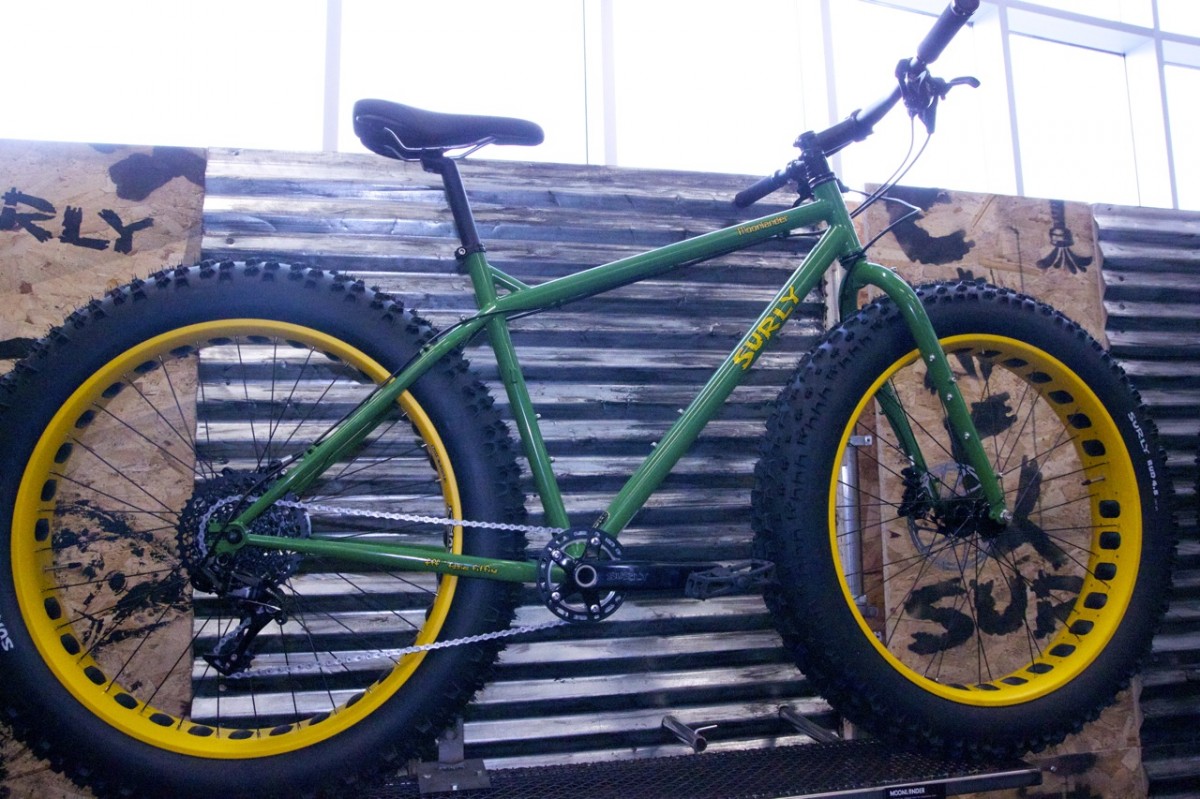 Even if you aren’t into the whole fatbike thing, you have to admit: Surly is one of the most irreverent brands in the bike industry today. Never ones to take themselves too seriously, these folks always throw the best parties and they aren’t afraid to do weird stuff with mountain bikes. Case in point: the Moonlander Special Ops.

This special edition Moonlander sports a John Deere-inspired color scheme and features Surly’s own X-Sync narrow wide stainless chainring plus chain guide. It’s a 28t, 58mm BCD ring mated with a 94mm BCD guard. This combo will eventually be offered aftermarket as well for those who are interested in a retro-fit.

Like the original Moonlander, the Special Ops is your go-to 5-inch fat bike for frozen adventures and multi-day treks. For those looking for a more playful, trail-ish 5-inch fat bike, the Surly Ice Cream Truck is still your guy. 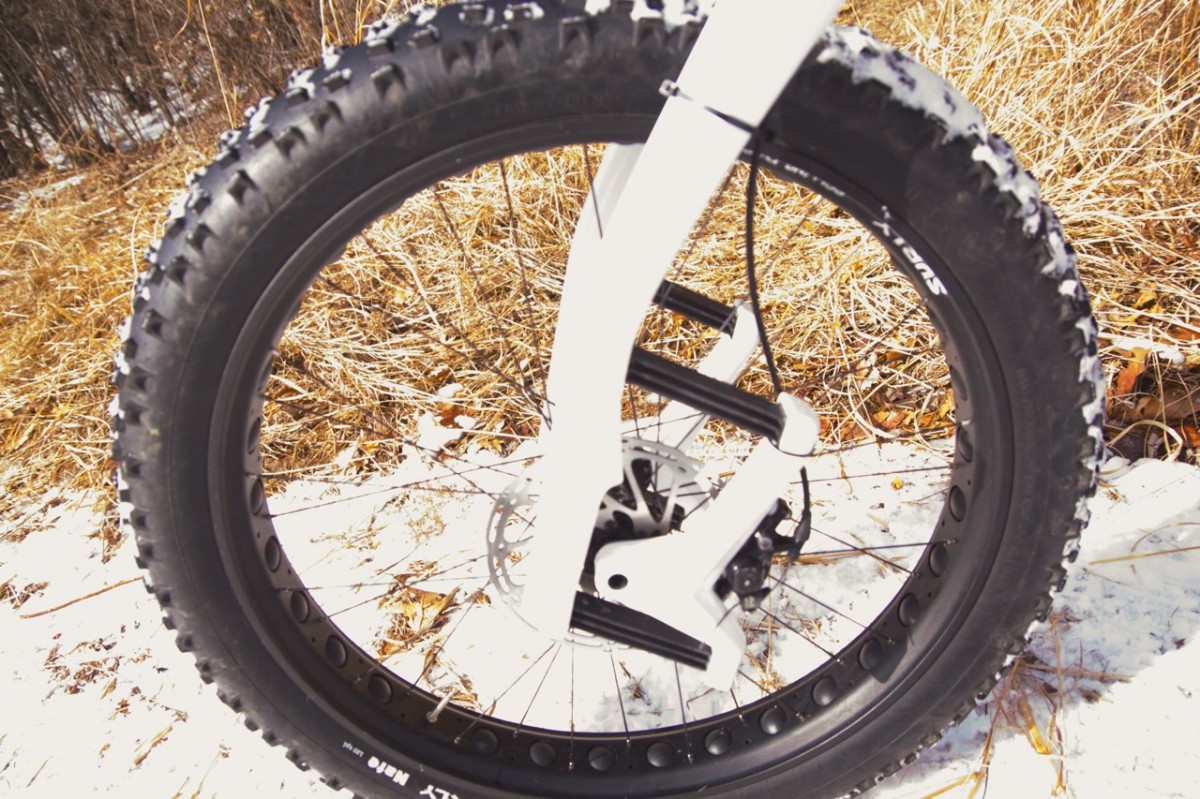 Speaking of the Ice Cream Truck, I demo’d one out in the shallow snow at Frostbike but this was no ordinary build–it featured the new Lauf carbon fat bike fork. Consider this a teaser for a more in depth article about the Lauf fat bike fork. 🙂 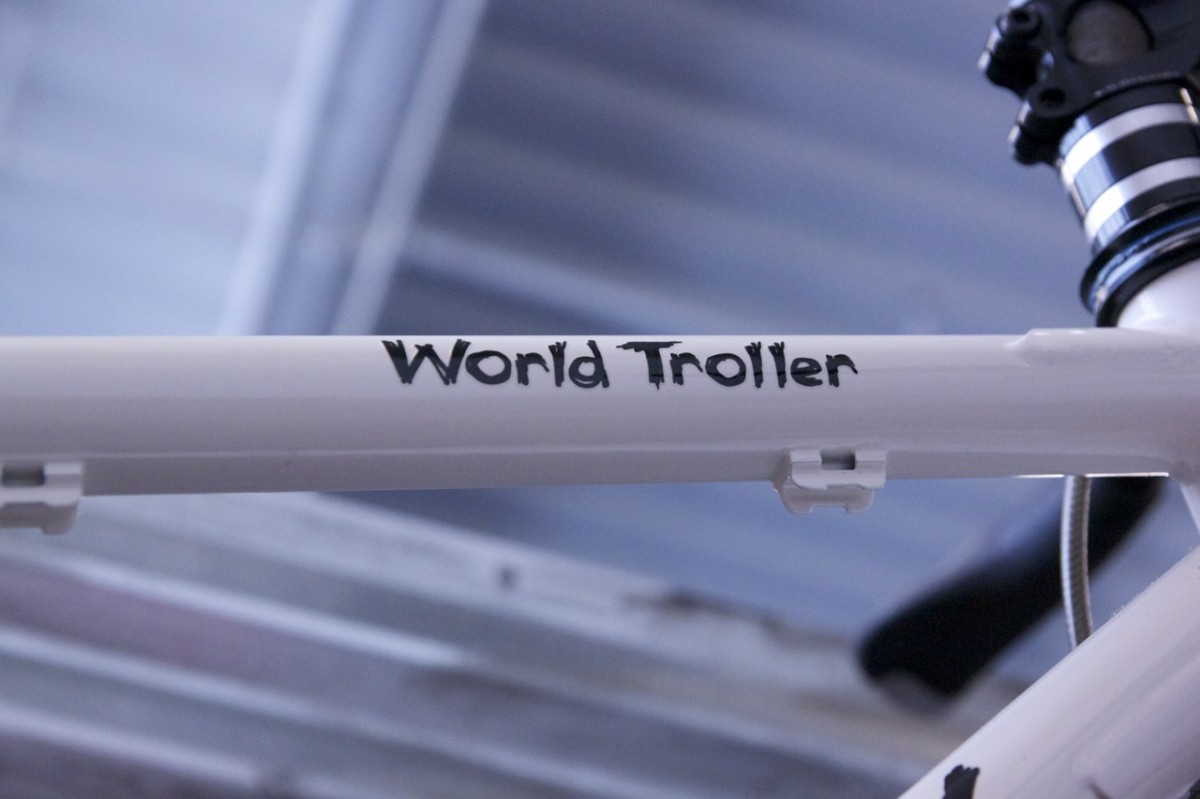 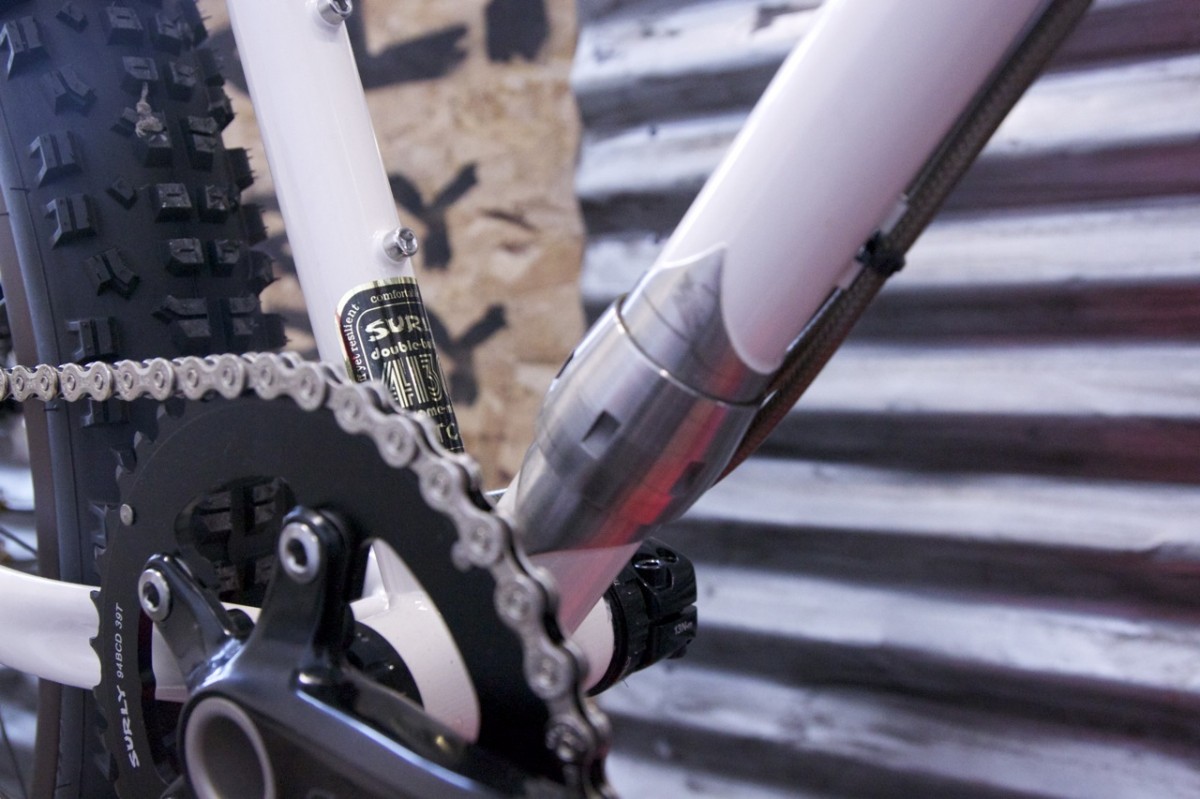 Surly also had their World Troller 26+ bike on display, and it’s a real stunner. The bike is designed to, well, travel the world, and it has the S&S frame couplers to prove it. (For those who aren’t familiar, couplers allow you to break the frame down for easy transport.) And finding repair parts for the 26″ wheels should be no problem, no matter where you find yourself on the planet. 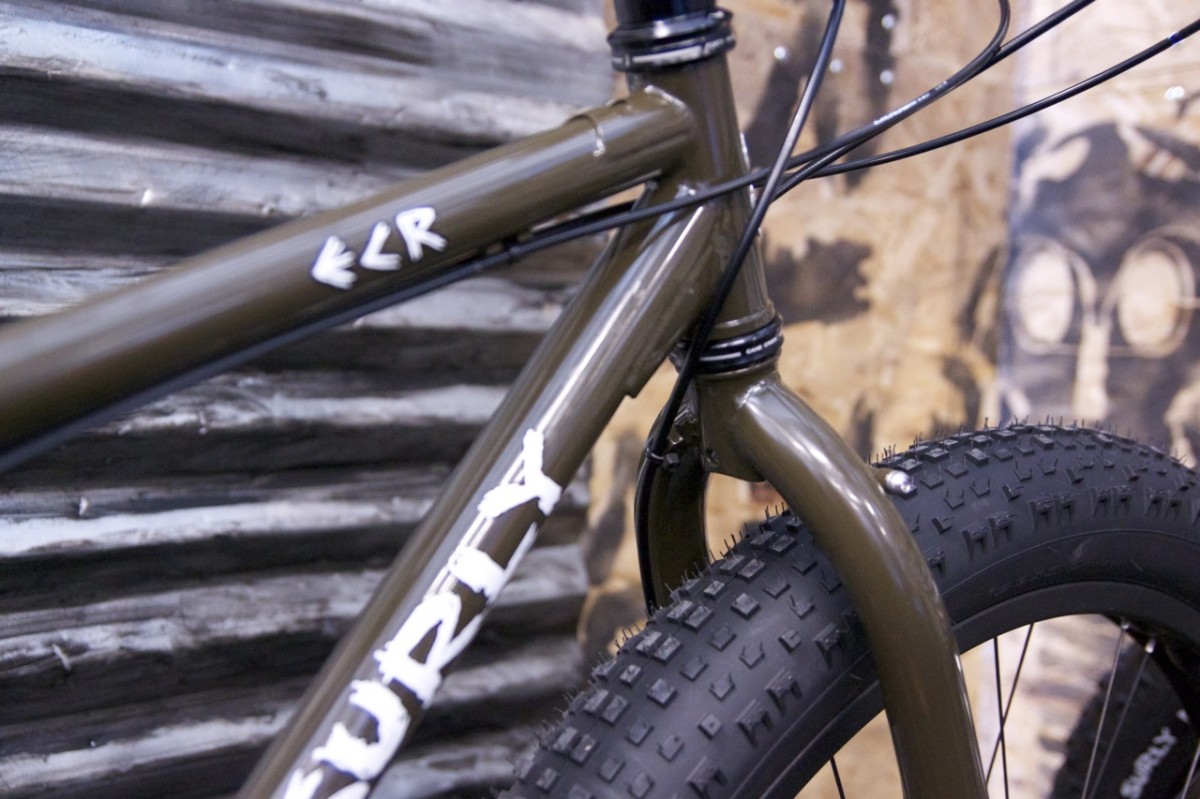 I also checked out the Surly ECR, an off road touring 29+ bike that is designed to handle all the racks, fenders, and bottle mounts you need to go pretty much anywhere. 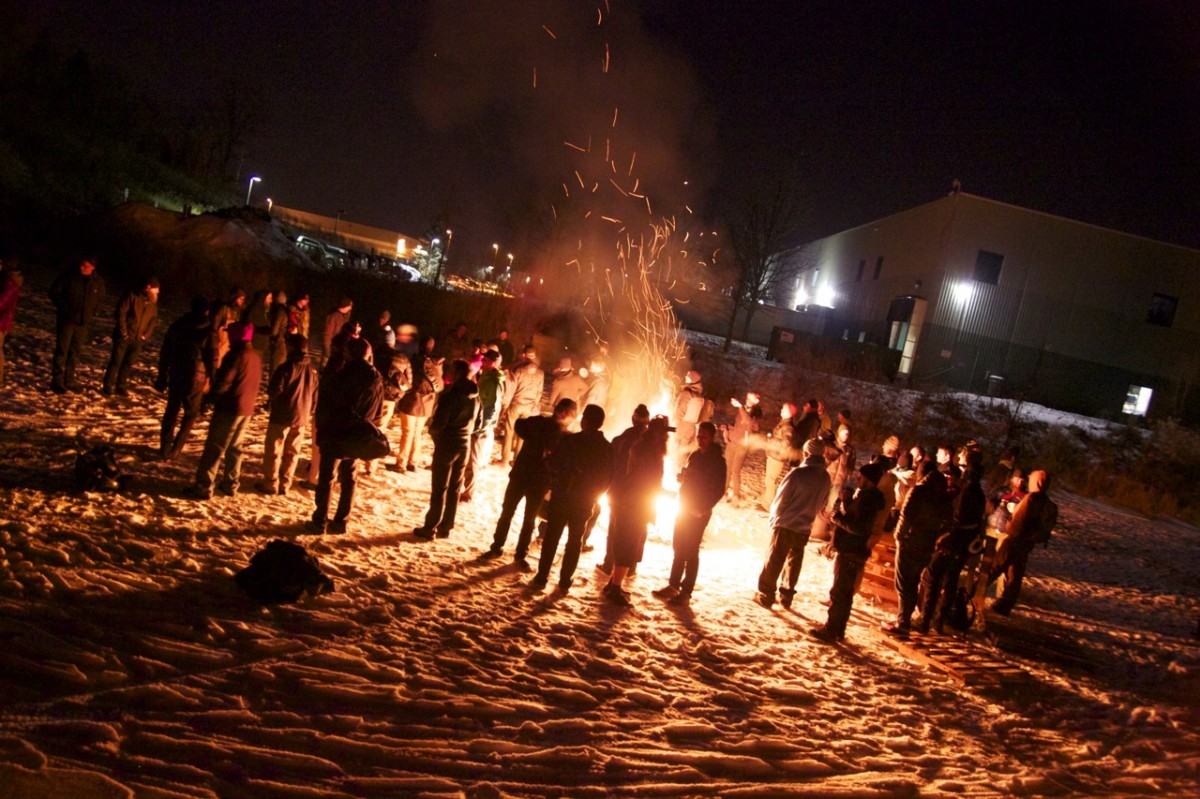 But perhaps the highlight of Frostbike was the Surly fat bike races on the frozen pond behind the QBP warehouse. Much Old Style was consumed around the bonfire as relay racers attempted to navigate the figure 8 course amid constantly changing rules. Fittingly, at the end of the race there were no winners or losers–just empty beer cans littered around the fire. 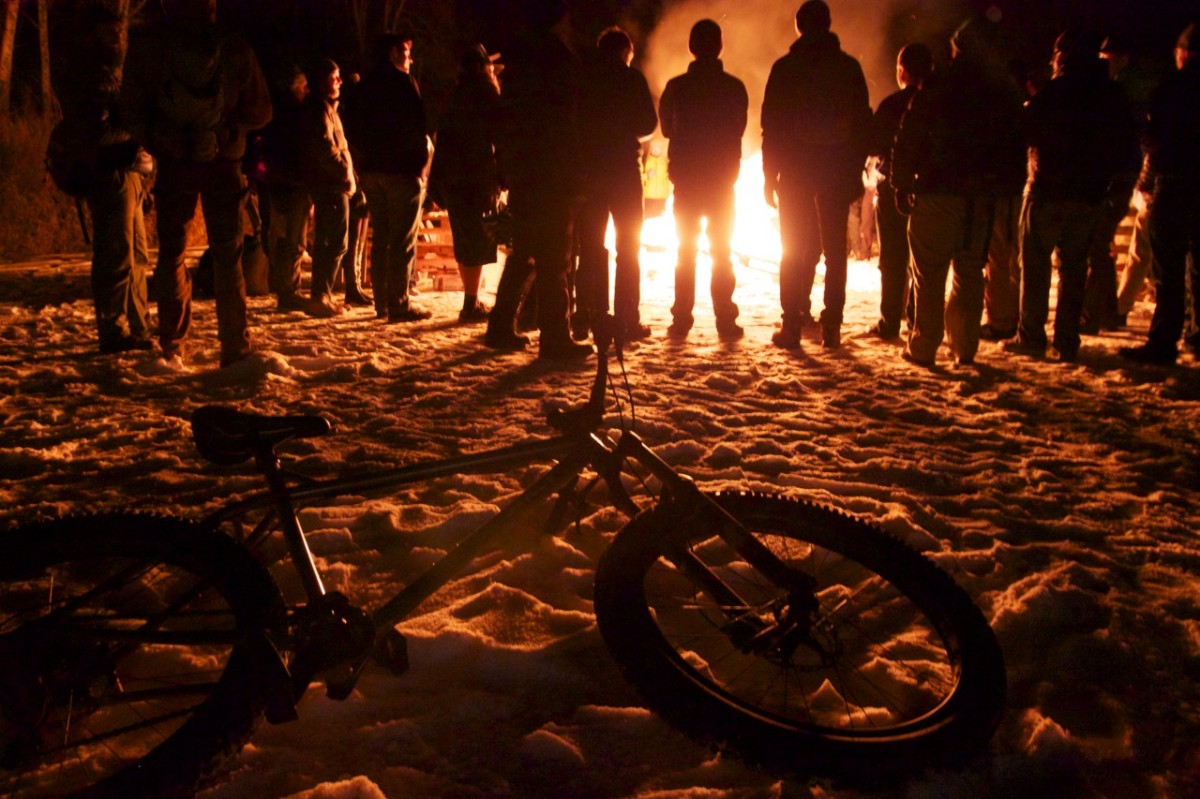