New Belgium recently released the schedule for this year’s Tour de Fat and chances are, the festival will be landing somewhere near you! Each festival kicks off with a bike parade and includes performances, contests, and games and if you’ve never been, I personally recommend giving the Tour de Fat a go this year. The event is free and proceeds from beer and merchandise sales go to local non-profits.

New Belgium clearly understands that beer and bikes are a good match, so we decided to put together a beer & singletrack pairing menu for each stop on this year’s tour. I recommend hitting the trails first, then heading to the festival. Once you hit the festival you probably won’t want to leave. Or, you’ll at least want to take a cab home.

Finding singletrack in Washington D.C. is a bit like trying to find politicians willing to compromise but I think I have the answer (to the singletrack bit anyway–politics are hopeless). Yards Park is right on the Anacostia Riverwalk Trail, which you can take across the river almost directly to the trails at Fort Dupont Park. This is the only bike-legal singletrack in the district and though the trail is rated a “beginner,” it’s a great place to ride right in town. Pair with a New Belgium Abbey.

I actually lived in Durham for several years and I can tell you there isn’t any singletrack worth riding even close to town. Diamond View Park is located right at the start of the American Tobacco trail–but this is just a paved rail trail. My recommendation is to hit the trails at Beaver Dam State Park early in the morning, then drive into Durham for some BBQ at the Original Q Shack before hitting the Tour de Fat. Pair with New Belgium Shift.

According to the Singletracks trail database there are a couple singletrack trails within a few miles of Palmer Square: Forest Glen and Indian Road Woods. Neither offers much in the way of elevation (this is Chicago after all) but altogether there are 6 miles of trail to explore. Add that to your ride to the festival and you’ve got a good workout! Pair with New Belgium Snapshot wheat beer.

Loring Park is located just south of the downtown core of Minneapolis and it’s just a couple miles from Theodore Wirth Park. I rode at Theo Wirth a few weeks ago in the snow but I can imagine the trails here–particularly the newest ones on the south end of the park–are a blast year round. Pair with a New Belgium Blue Paddle pilsner.

In Boise you’re never far from the trails, which means it’s decision time! Kestrel / Sidewinder / Hulls Gulch is a popular route but it can be busy on weekends. If you’re looking for the trail less traveled close to town, check out the steeps at Table Rock. Pair with a Ranger IPA.

Ft. Collins is home to New Belgium so you know this Tour de Fat stop will be special. Civic Center Park is directly east of Horsetooth Reservoir which is almost completely ringed with excellent singletrack. Two to hit close by: Maxwell’s and the Foothills Trail. Pair with Trippel, my favorite New Belgium beer. 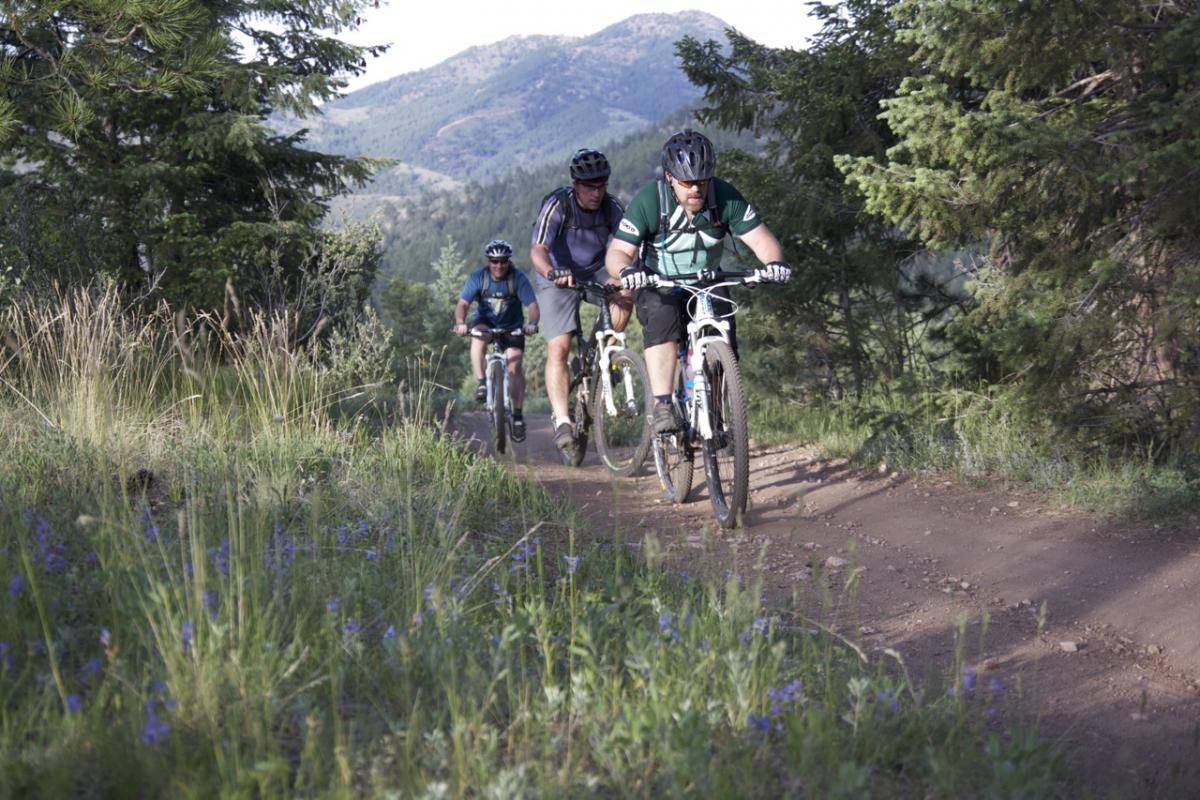 If singletrack trails had any weight to them, the city of Denver would be tilting far to the left since any trail worthy of mention is located at least 10 miles west of downtown. You could hit up Green Mountain as it’s one of the first decent trails you’ll run into heading west from downtown, but I say keep going a little further and ride Lair O’ the Bear. Pair with the classic Fat Tire amber ale.

If you want to ride close to Golden Gate Park in San Francisco, head for the doubletrack at Marin Headlands. But for the full singletrack experience, drive across the bridge to the newly relocated Mountain Bike Hall of Fame and check out the trails at Camp Tamarancho. Pair with plenty of New Belgium Slow Ride.

At this point in the list we had hoped to have a stop on the Tour de Fat with actual mountain bike trails at the park but in this case, California car culture wins out. At least it isn’t a long drive to Spring Canyon. Pair with a Sunshine wheat beer.

This one is a no-brainer: head north across the river to the Papago Park trails for 5 miles of beginner-friendly singletrack for your whole crew.  Enjoy with a 1554 black lager–after 10 stops and a full summer, you’ve earned it!

Informal poll: Which is your favorite New Belgium beer?

Community
How do you Reward Yourself After a Big MTB Ride?
Trails
The Bay Area Ridge Trail: A 550-Miler Close to Home
Gear
Test Ride Review: Pivot LES Fat
Culture
The Mountain Biker's Guide to the Best Packable Beers

Too bad they aren’t stopping at Brown County State Park. They could draw riders from Indianapolis, Cincinnati, Dayton, and Louisville.

Such a cool list! I may have to check out one of these stops…

Looks like a good time. Hopefully they expand a little more in the future. Or is this a typical line up?

The schedule changes from year to year. A few years ago they came to Atlanta and our local bike club (SORBA Atlanta) helped man the merch booth for a cut of the proceeds from sales. Was fun times!

Will probably avoid the craziness of City Park in Denver and ride Buffalo Creek or something fun like that. Afterward, crack open a few New Belgium Slow Ride IPA, my current favorite NB beer.