Long distance trails hold a special allure for outdoorsy folks, and judging by the success of Cheryl Strayed’s Wild and Bill Bryson’s A Walk in the Woods, the notion holds sway for folks all along the spectrum from couch potato to uber outdoorist. (Read both of these books, but please don’t pay money to see A Walk in The Woods. Sadly, it’s a real stinker.) The 2,650-mile Pacific Crest Trail (PCT, or “Preferred Cycling Trail” in some circles…) from Mexico to Canada and the 2,189-mile Appalachian Trail from Georgia to Maine are the stuff of lore, but for mountain bikers, they are also the stuff of angst as we are prohibited from these paths. As the debates rage in these and other pages, I offer solace in the form of the Bay Area Ridge Trail.

The Ridge Trail is a 550-mile trail encircling the San Francisco Bay, located along the ridgelines. 365 miles are dedicated and in use today. The trail is multi-use, intended for hikers, cyclists, and equestrians. Stitched together through ten counties and myriad cities, towns, park and open space jurisdictions, all with differing rules around horses and bikes, “user gaps” do occur in some locations, meaning that 35 miles of existing trail are currently off limits to bicycles, with an equal amount closed to horses. While some of these gaps will prove particularly obstinate due to their respective land managers policies—wilderness designation, strong local opposition, etc., 330 miles are gracefully shared throughout the region, and the Ridge Trail board and staff are working hard to make all miles open to everyone. 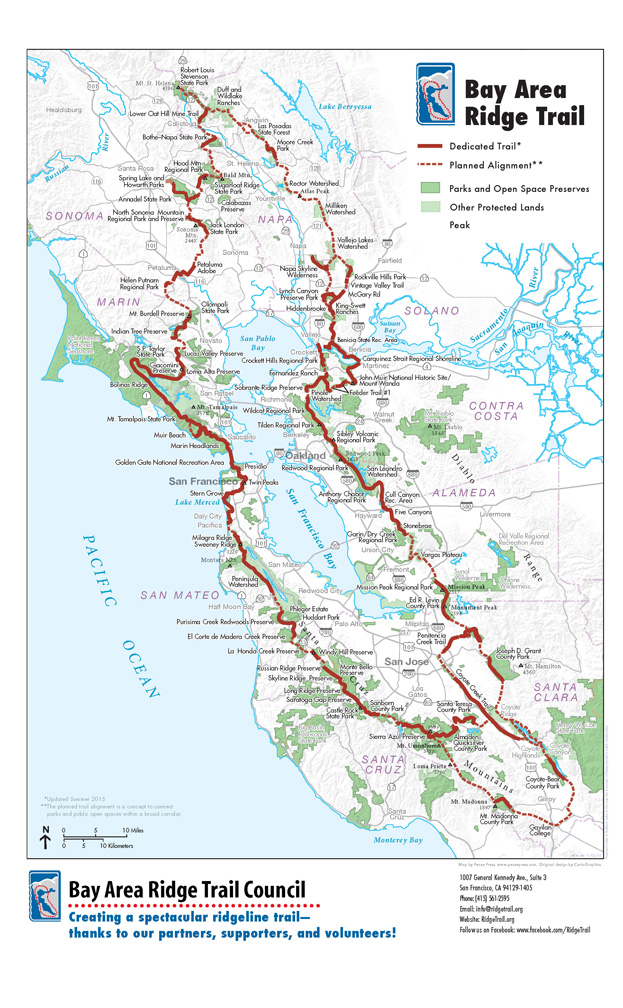 Among others, Austin McInerny has ridden the entire Bay Area Ridge Trail. A current Ridge Trail board member, McInerny’s day job is leading the National Interscholastic Cycling Association (NICA), the umbrella organization for high school mountain biking nationwide, about which I will surely write in the near future. In 2010, McInerney was new to the Ridge Trail board, having been recruited by the legendary Michael Kelley. Kelley was concerned that with his own retirement from the board that there would not be enough mountain bike representation, and so implored McInerny to join. Compelled by the vision, he did join, and promptly realized he needed immersion in order to comprehend the undertaking.

“I just didn’t feel I knew enough about the alignment and scope of the trail, so what better way to get at it than to ride the whole route?  I asked Yuri Hauswald, a friend, writer, and pro mountain bike racer to join me. He had some pals at Bike Magazine, so we ended up with a photographer as well.”

Beginning their sojourn in August, heat gave the trail a wobbly, mirage-like patina. One segment in particular Hauswald described as “like riding a trainer in front of a flaming pizza oven.” Many segments of the trail fall on the coastal/foggy side of the line, particularly those on the San Francisco peninsula where ridge lines separate the bay from the Pacific Ocean. But several hundred miles of the trail separate the bay from hotter, easterly inland climes. This extraordinary diversity is one of the key characteristics of the Bay Area Ridge Trail. The fogs of small coastal valleys support thousand-year-old redwood trees and while the trail does not, in fact, traverse the filming location of the ewok speed-bike scene from Return of the Jedi as this writer had previously espoused on a now-embarrassing number of occasions, it does traverse George Lucas’s property via a tunnel decorated with storm trooper stencils. So there’s that.

Many Ridge Trail miles are of the open, rolling grass-and-cow-land variety. Though the cattle-grazing aspect does mean parts of the trail are pock-marked and poo-laden, I always feel a small happiness when I am trusted to “please close the gate” behind me. This buoys my underlying sense that by gosh, we can all get along, and share these lands and trails across a wide spectrum of uses and users. In jurisdictions where cyclists have long been excluded—lands in Marin, or owned by the East Bay Municipal Utility District, for example—managers are slowly awakening to the inherent unfairness of bike bans, particularly when horses and hikers are allowed unfettered access. And the rise in young people wanting to ride a bike in the woods instead of virtually stalking other human beings in a digital forest will continue to be a major factor in this slow but necessary change. Bike bans aside, private land ownership is the biggest impediment to the completion of the Ridge Trail. McInerny and his crew experienced several of these gaps along their sojourn, and resorted to road burns, or were shuttled through gaps by friends or public transportation.

Another of the wonders of the Ridge Trail is the history one encounters along the way. These are the lands of the Olompali, the Kirkin, the Ohlone and Miwok. The Bay Area Ridge Trail passes by California’s first state capitol in Benicia, multiple Spanish missions, Nike missile sites from a fearful World War II era, and the enduring and beautiful Presidio in San Francisco. One of my personal favorites is the Oat Hill Mine trail in Napa County. Riding up “The Oat” as it is affectionately called, an old wagon trail originally used to access the cinnabar (mercury) mine, one can see the grooves and ruts the wagon wheels carved into solid rock with their repeated journeys between the mine site and the town of Calistoga. The furthest end of The Oat with its craggy black rock outcroppings is reminiscent of the wilds of Utah, and has a vaguely spooky lost-ness to it. While several miles of the bikeable Ridge Trail are of the fireroad variety, there are an impressive number that qualify as true singletrack, and The Oat is one of them. With the trail pamphlet including warnings regarding advanced technical sections, ticks, poison oak, rattlesnakes and mountain lions, it is hard to imagine that you’re really only fifteen or so miles from the Napa tasting rooms where thousand-dollar bottles find their way into Ferraris and chauffeured Bentleys.

Perhaps not surprisingly, the San Francisco segments couldn’t be more different. Crossing the Golden Gate Bridge, where the Ridge Trail shares an alignment with no less than three other long-distance trails—the San Francisco Bay Trail, the California Coastal Trail, and the San Juan Bautista de Anza Trail—the Ridge Trail marches through the Presidio, past one of the precious few campgrounds along the route at Rob Hill, traipses through the middle of the University of San Francisco campus, threads its way between the Haight-Ashbury and the Castro, passes the SF zoo’s front gate, before coming to a significant gap heading south of the county border into Pacifica.

The San Francisco Bay Area is home to over nine million people, and yet within a maximum of 20 minutes by car or public transportation, one can find oneself far from Silicon Valley’s tech hubs, San Francisco’s tourists, or Oakland’s hipsters, atop a trail enveloped by chaparral, deer, and coyotes. And isn’t this why we live here? In this land of astronomical rents and legendary traffic? The vision of the Bay Area Ridge Trail is one that speaks to the soul of a person, be they programmer, hipster, biker, hiker, horse or hound-handler. So amid the necessary noise that is the fight for access to trails, it is a comfort to know that the Bay Area Ridge Trail and its dedicated staff and board are patiently moving the path forward, one mile at a time.

Progression
How to Stay Strong in the Off-Season, Even if You're...
Gear
Why are Good Rain Jackets so Expensive? We had to...
Gear
13 Reliable, High-Quality Mountain Bike Products Designed to Last
Gear
Best Mountain Bike Gifts Under $50
Subscribe
Login
Please login to comment
4 Comments
Most Voted
Newest Oldest
Inline Feedbacks
View all comments

This sounds like an epic route!! It appears that I have a reason to return to the Bay Area after all…

I know Skyline and Rockville very well and there are a lot more fun trails in each park to test and improve your skills. Great article!!!!

sick!!! I will totally have to check those places out! always looking for new trails to ride….