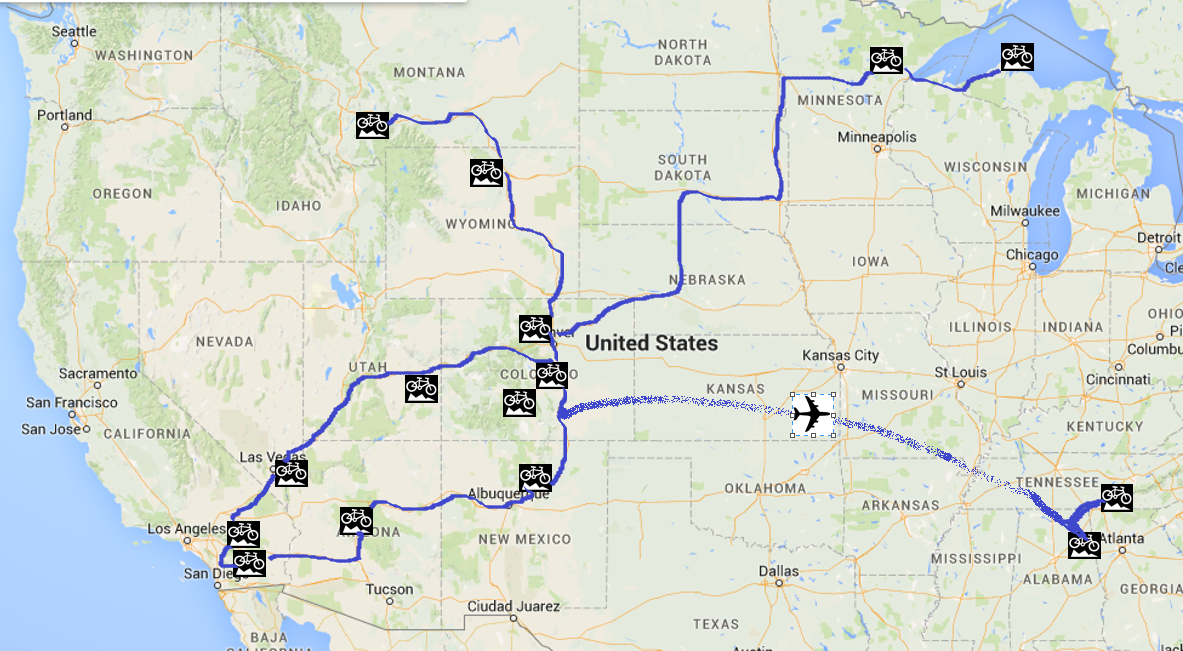 We’re almost two months into 2015 now and trails will be drying out sooner than you think.  So, between work, family, and skiing, my thoughts turn to where to ride in 2015.  Having published my Top 14 Trail Discoveries of 2014, it’s time to start thinking about what has the potential to top that; as my top 15 of ’15!

Each year I set goals as to how many new trails I would like to ride, and where they might be.  My goal for ’15, in addition to covering as much new-to-me singletrack as possible, is getting back to expanding my geographic horizons, which means moving beyond just the Four Corners states.  Potential family and work trips may deliver me to areas outside CO, UT, NM, and AZ, including a few states I’ve never ridden in, so should those trips come to fruition, I plan to be prepared to ride those areas while visiting.  What follows are 15 as yet unridden by me trails on my wish list, which I believe I actually may have a chance of getting to.

Having lived in the same place for four years now, finding rides I haven’t done within a day trip–which are actually worth heading to–is getting tough.  However, I have identified three which beckon me in this coming year.

The fact that I haven’t ridden this one yet is currently intolerable.  It lies on Pikes Peak, which rises up almost directly above my home.  What’s more, my son, Miniskibum, has done this one… without me (friends picked him up on a day when I was not free to ride).  Upon arriving back at the house, his first words to me were “Dad, why did you never take me on that trail?!”  Well, the reason was it requires a shuttle, and the shuttle must go up the costly Pikes Peak Toll Road.  But now I have reliable confirmation that the trail is worth it and then some, so off we will go.

When Singletracks Editor in Chief Greg Heil, veteran of 450 trails and multiple enduro races says “this is one of the best trails I’ve ever ridden, bar none” and specifically raves about the downhill and the scenery, you know it’s got to be good.  Quite frankly, that’s all the recommendation I need, especially for a trail within four hours of home.  I see a weekend camping/biking trip in my summer.

A Little Further Out

8,300 feet of descending from the high alpine to classic desert—why haven’t I done this yet? On my first pilgrimage to mountain biking Mecca, the UPS and LPS sections of The Whole Enchilada were still renegade trails, so I rode just the traditional Porcupine Rim… and declared it to be my favorite trail.  What could possibly be even better?  Doing the whole thing, of course.

Subsequent Moab trips have been in early spring or late fall, meaning Burrow Pass and even Hazzard County were snowed in.  This is the year I schedule my pilgrimage for a time when The Whole Enchilada will be rideable in its entirety.

Glorieta Canyon rises over 2,000 vertical feet, includes an old ghost town, and then provides access to the summit of Glorieta Baldy with views of the enchanting mountains east of Santa Fe.  After looping Baldy, another canyon delivers the rider down a long, steep, rocky route back to the base.  The problem?  The only realistic access to the route is through private property.  When I first went to ride the route, the Glorieta Baptist Center, which owns the access, was in the process of being sold and no longer allowing access.  Since then, it has been purchased and word is that the new owner may return to granting access.  If they do, I will thank them profusely and enjoy the exploration that follows.

A family trip to San Diego is in the works.  While it is not specifically a bike trip, I can’t imagine not taking the bikes and hitting a few rides along the way.  By doing a circuit there and back, I can hit four of my most desired bucket list rides.

The trip there will take us through Vegas, so why not stop in at Nevada’s premier riding venue while we’re in the neighborhood?  With many miles of rugged desert cross country riding as well as shuttleable downhill routes, I suspect Miniskibum and I will really enjoy the stop.

Ever since I saw the helmet cam video from Mountain Bike Bill’s blog, I’ve wanted to hit these trails, but never expected to be returning to SoCal.  Now, with the trip on the books, I’ll make sure I don’t miss the opportunity to hit what looks like a very entertaining trail system.  I hope there’s something for a non-riding spouse to do for a few hours!

Considered by many to be the premier ride in Southern California, Noble Canyon looks to me a lot like a California version of New Mexico’s great South Boundary trail with a little climbing, some ridge riding, occasional exposure, and a long plummet to the valley floor for a finish.  I look forward to seeing how it stacks up.

A slightly circuitous route home will allow us to make yet another pass through Sedona and hit the one must-ride which has eluded me so far.  Those who have ridden it say the Hangover trail has plenty of scenery and exposure, even by Sedona standards, which is really saying something.

This fall, my daughter will enter her senior year at Montana State University, after which I will lose my built-in excuse to visit my beloved Big Sky State.  So this may be my last gasp at a couple great Montana Routes.  One has sat at the very top of my wish list for years.

I have a particular affinity for the Tobacco Root Mountains west of Bozeman.  To me, they are the single most beautiful range it’s been my pleasure to visit.  The routes I’ve ridden there are beyond gorgeous.  The biggest route in the area, which has eluded me mostly due to a lack of fitness for approaching such a strenuous backcountry adventure, is the Curly Lake Highline loop.  While it’s only 23 miles, it requires a full 5,000 vertical feet of climbing, mostly at altitude in very rugged, remote mountains.  As of now, I’m officially in training.

Ever since reading the description of this ride in the Mountain Biking Wyoming Falcon Guidebook, I have wanted to ride here.  The Bighorn Mountains are remote and beautiful, and East Tensleep lake is reported to be beautiful and pristine.  On each previous trip to Montana, I was weathered out when passing through.  Maybe this will be the year I finally get to sink my knobbies into Bighorn dirt!

I generally avoid the Southeast.  I can’t stand heat, especially when combined with humidity, and I prefer my tea unsweetened.  However, work may send me to a meeting in Northern Alabama.  If so, I’ll see if I can take some vacation time while there to beef up my resume in the Southeast, a region I have very little riding experience in.  Hopefully, I’ll get to go early season, before things heat up.

No high alpine, no desert, no anything that I usually gravitate to, but this place just looks like tons o’ fun.  I can’t believe I’m actually excited about the prospect of riding in the deep south.

While in Tennessee, this appears to be not too far from Huntsville, and the reported predominance of rock gardens beckons to me.  From my time in Virginia riding the likes of Elizabeth Furnace, my recollection is that the rocks out east tend to be of less flow and greater challenge than rocky western venues.  I look forward to seeing how this area compares.

This family trip is the least firm, but if it happens there are a couple venues I would like to hit while in the northern tier.

Not yet having been to either, this one strikes me a lot like Coldwater.  Densely wooded and not a lot of elevation change, but a rather sizable network of purpose-built singletrack perfect for swooping through the forest.  Being relatively close to our primary destination of Bemidji, this one looks like a must-do when visiting.

This one is a long shot at almost eight additional hours from Bemidji, but I may never be in that part of the country again, so I gotta give it a shot.  Everyone who’s ever ridden this remote venue on the shores of Lake Superior says it compares favorably to anything they’ve ever ridden, including some of the great rides out west. If nothing else, I can tell it is wonderfully unique, and that alone makes it worth a visit, as well as the desire to support all the intrepid locals who have constructed such a network in such a remote area.

It’s an ambitions schedule and I’ll be shocked if I pull it all off.  But the goals are set and the pursuit begins with vigor.

Singletracks
Survey: Tell Us About Your MTB Travel Habits
Beginners
Have Bike, Will Travel: 3 Tips for Traveling Long Distances...
Trails
10 of the Best Fat Biking Trails in the US...
Videos
Video: Mountain Bikes Featured in Craft Beer Response to Superbowl...