The Pivot LES Fat is not only the company’s first entry into what is becoming a saturated-fat market, it is a reincarnation of the popular Pivot LES (pivot-less) hardtail that is impregnated with design innovations that make this the most protean fat bike on the market today.

To start, Pivot Cycles, already lauded in the industry as having some of the most reliable carbon frames, translated their proprietary stiff, hollow-core development process to the LES Fat. This allowed them to make a stolid, comfortable frame with a large downtube and bottom bracket for unparalleled power transfer. The frame was designed with three water bottle mounts for long days or races in the saddle, and with multiple cable routing options (including internal) for both 1x and 2x drivetrains. 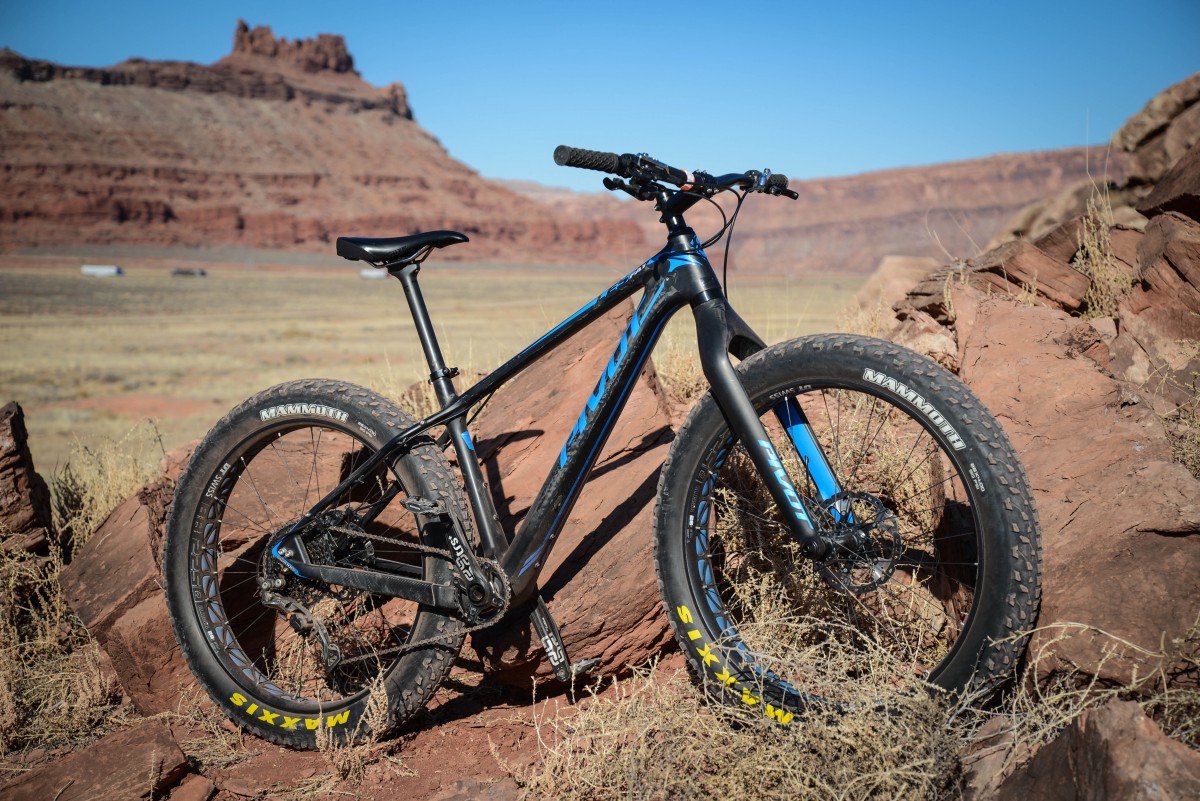 What really sets this fat bike apart, however, is the Swinger dropout system that acts as a slider. This not only makes the LES Fat singlespeed-capable, but it will accommodate several current fat bike and fat-plus wheel sizes, including current 26in fat bike wheels sporting up to 5 inch tires, 29+, and 27.5+. The Swinger also allows riders to adjust the chainstay length to custom-tune ride preferences.

Pivot also includes two headset cup options (zero stack and 18mm), which levels the front end geometry for multiple wheel sizes. It is also Bluto-compatible, though it comes with a Pivot-branded carbon fork that is 150mm spaced for 5-inch tires.  The rear spacing is 197mm, and Pivot was able to lower the overall Q Factor with certain cranks to keep feet together and reduce hip, knee, and ankle fatigue.

The Deets (from Pivot Cycles):

Although the video of Aaron Chase riding this fatty like a park bike in the snow is beyond impressive, I opted for a more tame adventure on the Bar M trails adjacent to the Pivot Cycles demo trailer at Outerbike. Starting out, the bike felt very light, both in weight and moving it around on the trail. It felt too bouncy at first, and although I questioned the 8psi that the mechanics put in the tires for the demo (I normally ride with 5psi on dry, rocky trails), it still did not seem like it was enough. So I added a bit more, which improved handling. This was also the first time I had ridden the Maxxis Mammoth tires, which were not setup tubeless, and surprisingly had a very smooth rolling resistance even over chunky rocks.

I chose a section that allowed me to ride over rocks and build speed to carve around fast winding corners–the LES Fat did not disappoint. The steering is very precise, and the ride felt very supple overall once the tires were inflated to my preferences. The stem (length unknown) initially felt a little long for my taste as well, but in less than a couple of minutes I completely forgot about it because the bike handled so well. I would love to see what this bike feels like with what I usually ride: 780mm bars and a 50mm stem.

,Nevertheless, after throwing my leg over many a fatty in the past 3 years, it was immediately evident that this bike was well thought out, and approaching fat bike perfection. It was easy to manual and was very flickable around corners. It felt feathery and most of all: comfortable. The LES Fat only comes with one current build spec, but it felt ideal and well thought out for multiple riding applications.

The ability to run multiple wheel sizes, drivetrains, chainstay lengths, and cable routing options place this fat bike in a category by itself. The only downsides for most would-be fat bike purchasers: price and availability. Rumor and rumblings in bike shops say that Pivot limited their initial production (some say as little as 50 bikes) and did not anticipate the high demand this bike immediately garnered, so good luck finding one. I also hear that Pivot fired up production to help parallel demand, but even with a $4,500+ price tag, this little fatty will be hard to come by, and for good reason: it is arguably the best fat bike that has ever been manufactured.

Progression
How to Stay Strong in the Off-Season, Even if You're...
Gear
Why are Good Rain Jackets so Expensive? We had to...
Trails
New Tech Trail Coming to AR, Big Grant to NC...
Gear
Best Mountain Bike Gifts Under $50
Subscribe
Login
Please login to comment
2 Comments
Most Voted
Newest Oldest
Inline Feedbacks
View all comments

One bike that can run 26 fat of 29+? Sounds too good to be true. I wonder if it runs equally well in both configurations or if there are noticeable compromises.

Many fatties can actually run 26 fat or 29+… I saw many standard fatties on display at Interbike as 29+’s. They just don’t change the geometry in order to accommodate the differences. However, I haven’t seen anybody advertising their fat bikes as 27.5″+ compatible. Also, I think the fact that the geometry can be tweaked to accomodate the differences inherent in these wheel sizes is the real key here.

I SO want to ride this bike!