Rick and I were talking with one of the Ellijay locals at Bear Creek last month and he mentioned riding the mountain bike trails around the Stanley Gap area just outside Blue Ridge. This guy claimed the trails there were “better than Tsali” so I knew then and there that I had to check them out.

The trip from Atlanta to Blue Ridge ended up being a little less than 2 hours which was a nice surprise and the trailhead was well marked with ample parking and a map kiosk. As we were about to hit the trail we spoke to a couple guys from Marietta who had ridden Stanley Gap and they recommended we ride the singletrack as an out-and-back rather than a loop as described in Jim Parham’s book. The loop was said to be about 12.5 miles while the out-and-back would give us about 11 miles so we decided to give it a try.

After about half a mile of fairly steep climbing Mudhunny and I agreed that tackling this climb without a chance to warm up was a bad idea so we descended and took the loop option. The loop actually ended up consisting of more pavement than I would have liked but at least the ride was scenic. In the end I think we probably climbed just as much (if not more) on this route, though the climbing was a bit more gradual.

Some singletrack portions of the trail were overgrown in places and washed out from erosion in others. Overall I’d say the trails were in better shape than Bull Mountain but still not as fast as I would have liked. The scenery was a little monotonous as well since the trail stuck to the deep forest and a ridge (with no views) that seemed to go on forever. The final singletrack descent that we had earned over 10 miles of pavement and climbing ended up being just over 2 miles long – a big letdown for sure. 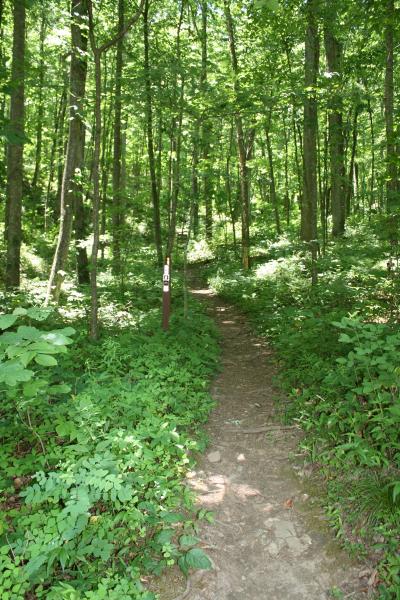 As we approached the car I decided to add a little more distance with the Flat Creek loop. For me this trail was much more fun – more gradual doubletrack climbing and a fast scenic singletrack descent beside a stream thick with rhododendron. The 5 mile loop has around 800 feet of climbing but it didn’t seem like that much, especially compared to the Stanley Gap route. 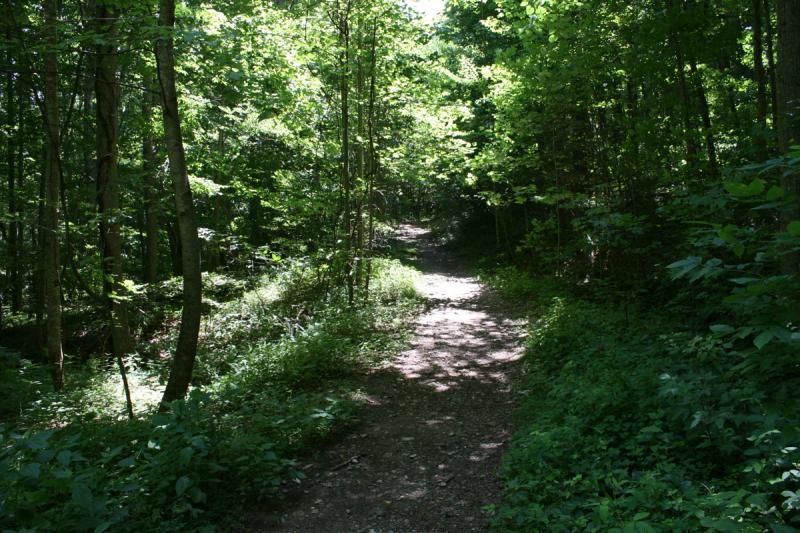 After our ride we decided to head for a swimming hole we had scoped out on our ride down Aska road. It turns out the large parking area is private property but you never would have known it for all the cars. One of the owners (a Stanley, of Stanley Gap fame) politely asked us to leave – but not before I got a chance to dunk myself in the cool Toccoa River.

After our ride I thought some more about the Ellijay local’s description – “better than Tsali” – and I thought to myself, better how? To me, if you say one trail is better than another they are at least similar in some way. Better than Tsali could mean faster, longer, more scenic, etc. but none of those apply to Stanley Gap. Perhaps he meant it’s more technical but technical riding is not what Tsali is famous for. Or perhaps he loves steep, grueling climbs but there aren’t too many people who’d agree that those are a good thing. Even more puzzling is the fact that this guy was riding Bear Creek at the time – perhaps one of the best descents in all of North Georgia – way better than the descents at Stanley Gap.

Nope, this isn’t the first time that I’ve been told a trail system is “better than Tsali” and been disappointed. Mudhunny and I heard the same said about Douthat State Park in Virginia. Yes, Douthat has more elevation and almost as many miles of singletrack but it’s not better than Tsali – just different. Anyway, at least now I know when someone says one trail is better than another I need to follow up with – do you mean better or just different?

They’ve done a lot of work in all the Aska trails. You missed Green Mountain, right across the road from the Deep Gap parking area. You also missed Long Branch and the Turkey Farm loop.

i remember riding stanley gap out and back from inside the wilderness area back in the 1990’s when i was just starting. we had a cabin in cherry log and that trail was awesome and tough back then, loved it even more when suspension forks came out. erosion has hurt the trail but RobertD pointed out some great trails near there that are fun for an afternoon. plus you can drink local brews in blue ridge afterwards!