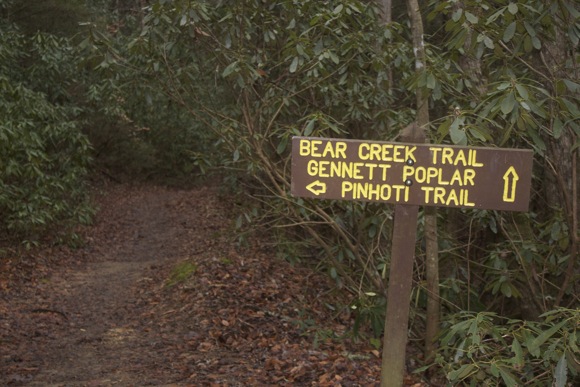 It took me nearly two months but I finally finished it: my Santa Cruz Tallboy FS 29er was ready to ride! After dialing in the suspension, checking every cable, and adjusting brake pads and levers, I chose the Bear Creek – Pinhoti Trail (P1, P2) loop outside Ellijay, GA for the maiden voyage. It turned out to be an incredible day of riding!

I first rode the Bear Creek trail in the late 1990s, and in those days it was considered one of the best, if not the best, mountain bike trail in Georgia (in 2008 Bike Magazine was still rating it the best in the state). Perfectly spaced water bars, moderate slopes, and clear water crossings are just some of the highlights here – not to mention the incredible views this time of year.

Since the time mudhunny and I first rode the Bear Creek loop, there’s been a new major trail addition in the area – the Pinhoti trail – which starts near Bear Creek and runs west into Alabama. These days a popular ride pieces together an 18-mile loop with the Bear Creek and Pinhoti Trails which I decided to tackle on an overcast December morning. 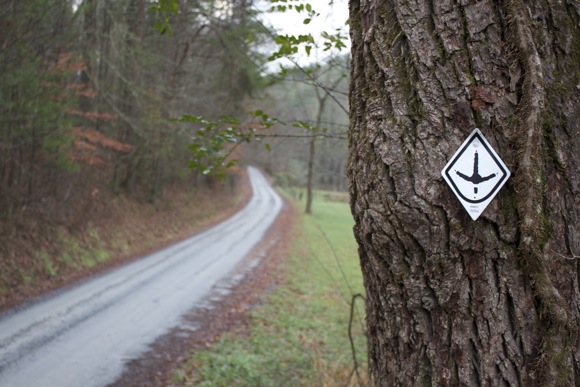 I parked at the Pinhoti Section 2 trailhead(known as P2) and started on the gravel road heading clockwise around the loop. Less than a mile from the trailhead I passed Mulberry Gap, a “mountain bike getaway” where many bikers choose to stay or take advantage of the parking, food, repairs, and other services. I haven’t personally visited Mulberry Gap but it’s a pretty unique set-up and friends have nothing but good things to say about the place. I made a mental note to stop by another time and kept pedaling into the cold morning fog. Off to the right side of the road I spotted a flock of wild turkeys, appropriate, given the name Pinhoti is a Native American term meaning “turkey home.” 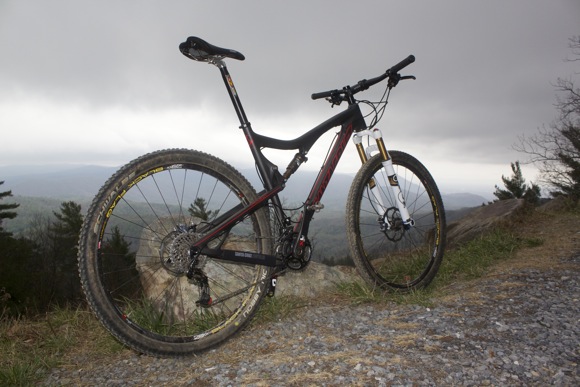 Near the top of the forest road climb I pulled off at the Bear Creek overlook and checked out the views (or at least what I could make out with all the low clouds). Another half mile of climbing lead me to the official Bear Creek trailhead (the upper one) and the start of the descent. For about half a mile the trail was rockier and rootier than I remembered and featured a couple sharp switchbacks before landing at a gated forest road. Apparently many riders choose to skip this first section, opting instead for a shorter initial climb up the road, but I enjoyed the old-school feel.

After about a mile of forest road descending, the singletrack begins and it’s glorious. This trail had “flow” way before the term became popular with mountain bikers and it still does today. But just as quickly as it began, the descent seemed to come to an end and I found myself staring up at the enormous Gennett Poplar, famously one of the largest trees in the state. From here I started climbing again, this time on the Pinhoti trail section 1, aka P1.

For those who are familiar with the Snake Creek Gap time trial series, this section of the Pinhoti trail isn’t nearly as technical as the stretch from Armuchee to Dug Gap but there is enough climbing to keep things challenging. In between P1 and the next section, P2, the trail briefly follows forest roads and former roadbeds, quickly narrowing to singletrack as the forest reclaims the corridor.

Up until this point my new bike performed flawlessly and I was actually kinda surprised since this is the first bike I’ve built up from scratch. Well, ok I didn’t install the fork and headset but I did everything else myself – which is probably why the rear derailleur decided to stop working on P2. It didn’t take a pro mechanic to see the derailleur cable had slipped out from the anchor bolt which was fortunately an easy fix.

The trail topped out as it made an unassuming bend around one final peak and began descending for the next two miles or so. To me this was the best part of the day thanks to the smooth trail, long sight lines, and carefully sculpted, wide sweeping turns. This is what North Georgia mountain biking is all about!

Even though I’ve probably done hundreds of rides like this in the southeast, this was the first time I’ve ridden a full suspension bike on one of them, and you know what? I kinda liked it. Sure, I had to work the ProPedal lever like a DJ spinning a record thanks to all the short climbs and descents, but to be able to smooth out the rough carpet of medium rocks and thick roots on Bear Creek made a fast, flowy trail even faster and more enjoyable. Feels like I’ve finally found a little bit of Santa Cruz right here in Georgia!

Great article, pics and video! That video is just what I needed for some morning daydreaming while sitting in my office on a cool, wet December day. Looks like a great trail!

Great read, and a well put together video! Was the video shot solo or did you have a partner helping out and what kind of camera captured the video?

Thanks guys, glad you liked the video. This was a solo ride and I used my DSLR (a Canon T1i) mounted on a Gorillapod tripod. After getting home and editing I figured out a few things (like making sure the camera is focused on the trail) that should make the next one even better. 🙂

+1 on the cool video. Takes a long time to collect all of those ride-by shots!!

More props for the solo video’g. It was obvious from the read and the shots that this was a solo ride. I thought you did a marvelous job of camera placement etc…..and good song choice.

Thanks for the info Jeff, as I mentioned in one of my forum post my wife got me a T2i last year and I want to bring it along on some rides with me but I’m worried about damaging it. How do you carry the T1i around with you?

@slipfinger, I carry the camera in my hydration pack, usually in the main compartment. On this ride I had a jacket in the pack which worked well for padding but honestly most packs pad the camera just fine on their own. I have fallen onto my pack while riding with the camera in tow and haven’t broken anything yet.

The only potential issue is with the lens cap falling off inside the pack as things get jostled around back there. This has caused a few minor scuffs on the glass but fortunately it’s not an expensive lens. Maybe a rubber band would help hold the cap in place better?

Forgot to mention in the article that the Pinhoti Trail is an IMBA Epic. Definitely worth checking out for those who haven’t ridden here!

So when are you gonna set aside 4-5 days so we can bikepack the entire Pinhoti???? I have a few people already interested and I’ve already done the work to figure out the route. Lets make it an official Singletracks ride. It would make for a pretty cool article.

That would be fun. Would be even more fun to have someone sag it for us. 🙂

I rode p1,p2,p3, and part of p4 while staying at Mulberry Gap in the spring of 2011. I had a blast! One of the best trails I have ever ridden, and honesty, think about it often. I want to go back as soon as I can…I just would not go by myself. The trail is really remote: i.e. no cell phones and some have said SPOT does not work well there..plus I saw two bears when I was on P1. Aptly named trail for sure.

my wife and I are looking at a cabin rental close to Bear Creek for July. After reading this and checking out the trail info i may have to push for that.

@delphinide, by that standard every trail here in north georgia is remote. Not to mention some of the backcountry epics in Montana and the rest of the Rockies…

Nice read and cool video! Thanks for keeping me thinking about riding while I anxiously await snow in the Northeast.