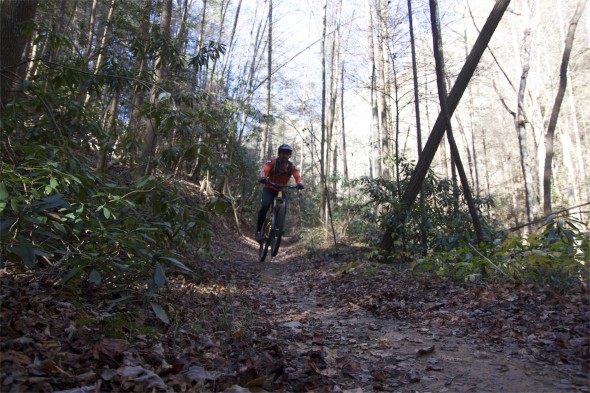 If you live in the Southeast, chances are you’ve heard of the mountain bike trails around Ellijay, Georgia. With classic favorites like Bear Creek, the 162.5-mile Georgia Pinhoti Trail, and the Mulberry Gap MTB Getaway, thousands of mountain bikers travel to this corner of the Appalachian Mountains to experience some of the best trails in the Southeast. In November, Jim and I had a chance to ride with some of the locals to find out what it takes to maintain such amazing singletrack, and to see what mountain biking means to this tight-knit community.

In Ellijay, it seems the local mountain bike community revolves around Mike and Terry Palmeri. Mike owns Cartecay Bikes in town while Terry works tirelessly to advocate for trails in the surrounding Chattahoochee-Oconee National Forest. On this cold November morning, Mike and Terry rounded up about half a dozen mountain bikers to lead us on a tour of the Bear Creek and Pinhoti Trails. 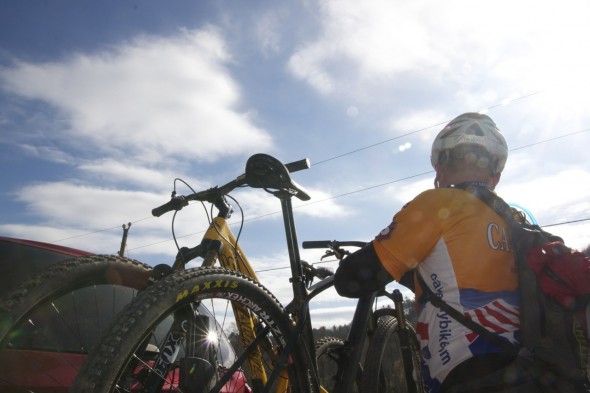 Although I had ridden these trails many times before, I wasn’t sure what to expect from this group of local riders. Would they see Jim and I as out-of-towners who simply create more trail work for them without giving anything back to the community? Would they try to embarrass the city-slickers with a grueling ride that would leave us begging for mercy? Thankfully, we could tell neither would be the case the moment we introduced ourselves.

Many mountain bikers have the false impression that National Forest trails were built decades ago and are maintained by government tax dollars. The days of the original CCC are long gone, and today, spending cuts mean less funding for trails on National Forest land. Terry Palmeri works closely with a group of diverse trail users called CoTrails to make sure that lack of funding doesn’t mean a lack of access for mountain bikers. 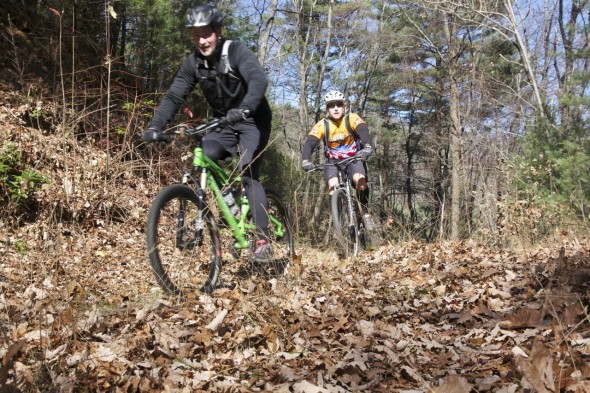 In 2010, CoTrails volunteer hours were valued at $820,000, more than twice the government trails budget for the district. There are about 850 miles of trails in the Chattahoochee-Oconee National Forest, of which about 170 are open to bikes. On the climb up the Bear Creek trail, I stopped to ask Terry what the group has been up to in the area.

Terry explained that portions of the Bear Creek trail, like many routes in North Georgia, lie on former forest road beds that have been gated to vehicles for many, many years. Clearly mountain bikers don’t get excited about riding on 20-30ft wide roadbeds, plus many of these paths aren’t very sustainable. Over the years, cupping and erosion can take hold, leading to “trails” that are bad for users and the environment. Consider, for example, the state of the Bull Mountain Trail System five years ago. 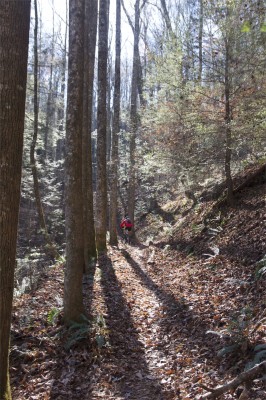 At Bear Creek, Terry and CoTrails are working on what’s called a “road to trail conversion” that seeks to turn unsustainable (and unexciting) former roadbeds into singletrack trails. This is accomplished by carving a curvy, winding singletrack path into the existing roadbed, which is not only appealing to mountain bikers, but also slows erosion by reducing runoff effects. These conversions don’t usually require environmental studies beforehand, which reduces costs and speeds the approval process (which is another big plus). Not only that, converting a 100-yard section of former roadbed can be accomplished in just a day.

CoTrails works all over North Georgia, and many volunteers are from Atlanta and points south. As riders, we’re often aware of the work our local clubs are doing and feel obligated to help out, but if we’re riding in places outside our local area, it’s important to find ways to support those trails as well. 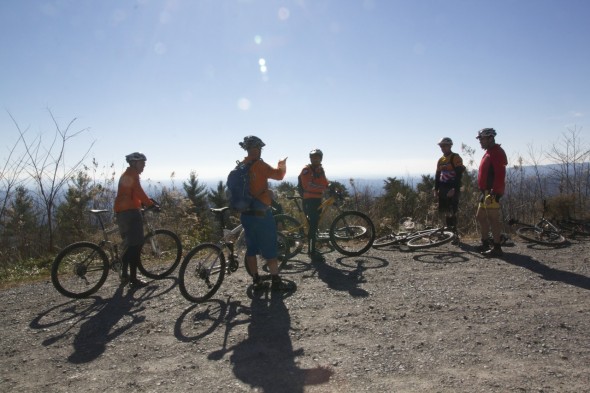 Mike Palmeri owns Cartecay Bike Shop in Ellijay. He’s also a firefighter for the city of Atlanta, which helps pay the bills. Mike has been in the cycling industry since the 1980s and is an outspoken advocate for the sport. In fact, several of the guys who rode with us at Bear Creek got into mountain biking as adults thanks to Mike. In many ways, there would be no local mountain biking scene without Mike Palmeri.

Cartecay reminds me of a bike shop I’d expect to find in a resort town out west, staffed with passionate mountain bikers and stocking bikes from core brands like Santa Cruz, Norco, Moots, Spot, and Borealis. Of course. most out-of-town riders don’t think to stop in to pick up a bike, but shop-branded apparel (Mike does many of the designs himself), maps, and supplies are big sellers.

The guys at the shop know that supporting killer trails like Bear Creek and the Pinhoti brings more riders to the area and gets the locals stoked on riding, but at times the effort can feel a little thankless. So many riders (myself included) take places like Ellijay for granted and leave little more than tire tracks and a few bucks at the gas station at the end of the day.

After the ride, Jim and I were starving, and Mike suggested the chicken soup at El Rey Mexican Restaurant. We all met up and chowed down on chips and salsa while warming ourselves with huge bowls of soup. At the register, Kevin insisted on paying for our lunch, which goes to show just how far this local group will go to welcome and support mountain bikers from anywhere.

After meeting Mike, Terry, and the others, I couldn’t help but feel some guilt for enjoying their trails for so many years without getting to know the folks behind the trails. But guilt alone doesn’t build trails or keep bike shops open, and action steps aren’t always clear for us as individual mountain bikers. Here’s to hoping that awareness is the first step toward improving the mountain biking community for everyone.

Your Turn: Do you love riding in Ellijay? What are some ways you’ve found to support the MTB scene outside your local area?

Great to see this story! I first met Mike in 1996 when I was looking to get my first “real” mountain bike. He was one of the only places around that had any Klein bikes, which is what I decided I wanted. After my first trip up there my dad and I ended up going back almost every weekend to hang out and ride the area trails. I miss those days! I still have never lost touch with Mike. Excellent shop and even better people!

I know this isn’t Bear Creek, but for some reason as I was lying in bed this morning, I was thinking about the beautiful green mountains around Dahlonega and the Bull Mountain trail system. The scenery and the vegetation there is just so totally different from out here in Colorado, and while I love Colorado, I definitely miss the big trees, the mist on the pond, the roaring mountain streams, and the lush rhododendron.

Gregg an old 2010 trail review of yours on Bear Creek got me hooked on the above mentioned area…and your awesome reviews in general here is a late thanks. Next time you come out lets try to get a group out toward Ellijay.

Ellijay is definitely a special place for mountain biking!!! Although next time in the southeast, I really want to spend some more time in Pisgah… there are still so many trails there that I haven’t ridden!!

Mike and Terry are awesome folks, and Cartecay is one of the best shops I have ever been in. Maybe the best. The few times I’ve been in the area, and fortunate enough to stop by, I was shocked at how friendly they were. Pull up a stool, sit down, start talking/listening, and you feel like a local who has been coming there for years. I have been to dozens of shops, and I’ve never had that type of familiarity or reception.

Riding in Ellijay and Dahlonega are a unique experience. Mega-kudos to volunteers like CoTrails for making it possible for the rest of us to vacay and enjoy.

How can we give back or contribute?

Wow Jeff great article. I was first introduced to Bear Creek, Pinhoti Trail and Mulberry Gap Getaway by a 2010 article on an old blog from Gregg and quite honestly, that has become my favorite place to ride. Thanks for making me feel like total crap for not stopping in the LBS I will definately do that next time. Great article!