I can’t tell you where I rode yesterday – it’s a secret. No, it’s not my own secret singletrack stash – plenty of people know about the trails – we’re just not supposed to talk about them. Across the US there are easily hundreds of bike trails that are secret for any number of reasons:

I don’t know the whole back story about the secret trails I rode yesterday but what I can tell you is that someone puts a ton of time into building and maintaining the approximately 10 miles of singletrack. I had been living in the area for almost two years before I found out about the trails which shows you how closely these secrets are often kept. 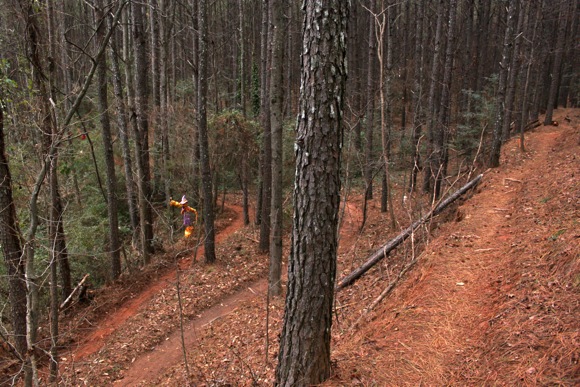 Singletracks has been publishing mountain bike trail information online for more than 12 years now and we’re constantly fielding requests to modify or remove trail information. These days it’s hard to keep anything hidden from the internet – unless those in the know have an incentive to keep things quiet – like miles and miles of singletrack.

Although there’s no way to study and track these things, my hunch is that exposure is ultimately good for some “secret” trails. Once the community recognizes the value of the trails, individuals and groups can work in the open to protect or enhance them. In some cases, local bike clubs might get the opportunity to work out agreements with landowners who might be open to this type of use (if only they were asked). Or a group of mountain bikers could even publicly raise the money to purchase the land outright. 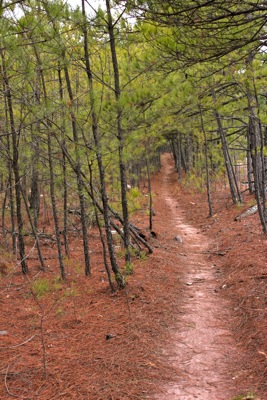 Several years ago mudhunny and I found out about a “secret trail” that started behind one of the bike shops in Stowe, Vermont. We had a blast riding the trails but were told not to post pics or reviews online. Then, a couple years ago, someone posted the trail to singletracks – Stowe Town Forest – and from the sounds of it, the trails are completely legit now with an official name, maps, blazes, and everything. Maybe it was because the trails started out in secret that they were ultimately able to flourish – who knows?

The 2nd rule – you do not talk about secret singletrack club.

Is that a scarecrow in the first pic?

Dang that looks like quite the secret to keep! Those trails look gorgeous!

Nice stuff-
ran into something similar last spring and cant wait to get back there and see what has happened since-
http://dchristianson.blogspot.com/2010/05/new-trail.html