On Saturday I started my 29 Trails in 29 Days challenge with a bang, riding the 34-mile Snake Creek Gap Time Trail in Dalton, GA. Temperatures were predictably cold at the start (34 degrees, 18 with the wind chill) but the sun was out and the trails were mostly dry. This was my first time riding this section of the Pinhoti Trail and I loved it! 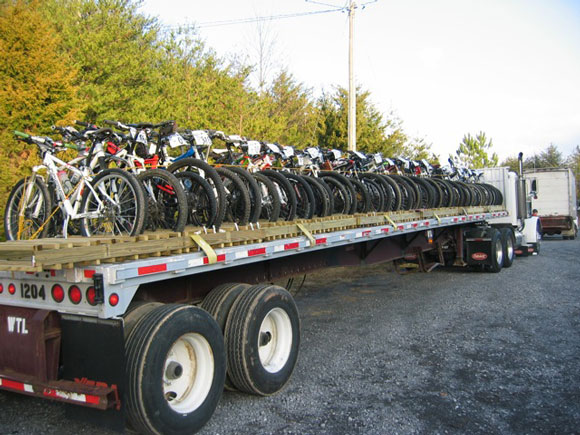 With the shuttle buses scheduled to leave for the start at 9am, I was geared up and had my bike loaded by 10 ’til – only to find that the shuttle vehicles were already full. About 15 of us were stranded in the parking lot, awaiting one of the first shuttle buses to return to pick us up after the 1-hour round trip. Since the race is a time trial, a late start really isn’t a big deal, though it was sort of a bummer to stand around in the cold for an hour before getting underway. Other than that, the logistics at the start were great – I’m guessing there were just more race-day registrations than organizers expected. 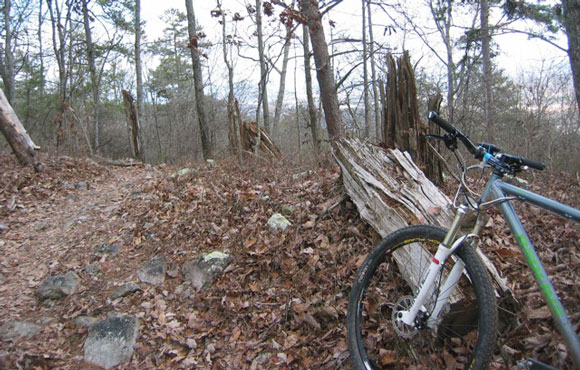 At the trailhead, things were quiet with all our bikes ready and waiting. Apparently the race plate was blown off my bike on the way over so I called out my number at the start and blasted down the fire road. The first couple of miles were flat to down leading to the infamous first stream crossing. On Saturday the water was less than a foot deep and roughly 20 yards across, though in past events the crossing has been much higher and wider (thigh deep by some reports). After the stream crossing where I managed to keep my feet mostly dry, the trail began a pretty serious singletrack climb and I could tell that my legs weren’t really feeling it that day. Thirty miles to go.

The singletrack climb ended at a gravel road and descended steeply before a short climb back onto singletrack. During these first several miles I passed riders back and forth enough times that I really wasn’t sure how many were in front of or behind me. We were all at least an hour behind the main field which wasn’t a good feeling. At one road crossing a volunteer asked how many more riders were behind which got me worried that perhaps I was the last rider of the day. Fortunately I later learned there was a “sweep” group that would pick up any stragglers. 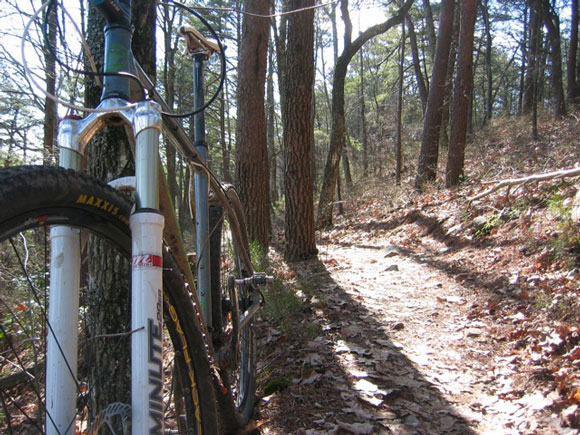 Ahead I found more singletrack climbing with some ridge exposure before descending fast, swoopy singletrack down to the first official sag stop at highway 136. The highway crossing felt a little dangerous because the trail basically pops you up onto the asphalt with little warning; fortunately, volunteers were posted to let the riders know when it was safe to cross. This was also the start of the 17-mile time trail option which meant I was at the halfway point of the race, even though my GPS only registered 15 miles. At two hours in I felt pretty good about my pace despite feeling fairly exhausted already.

If you know anyone who’s ridding this next section of the Pinhoti Trail, they’ve undoubtedly told you about the “technical” conditions atop the ridge between Snake Creek Gap and Dug Gap. Sitting at the sag stop I was really dreading what was to come, imagining a 5-mile long rock garden that would be just as difficult to walk as it would be to ride. There was also a section ahead called “the wall” that I imagined was some kind of 1,000-foot stair-climb/hike-a-bike to the top. Mentally, I was at a bit of a low point, worried about how I would tackle the second half. 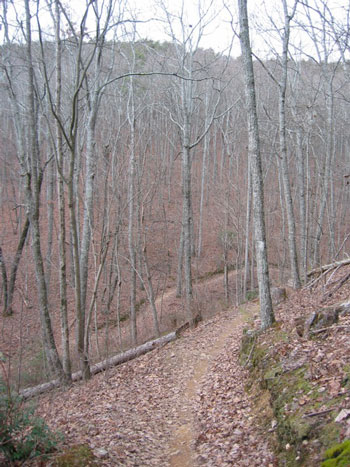 From Snake Creek Gap the trail climbs at a reasonable grade and before I knew it I was coasting back down the other side. This section was easily my favorite with sweeping turns, smooth trail, and bermed water breaks that were perfect for catching air. After reaching the bottom of the descent there was a gradual fire road climb to the final sag stop and the start of the 8-mile “technical” finish.

Anyway, back to the race. After riding several miles I honestly wasn’t sure if I had reached the “technical” stuff yet. Sure, the trail was slightly rockier than previous sections but it was still rideable and not all that different from previous sections. Admittedly a couple of the downhill sections were scary on my hardtail but I managed to keep the bike upright the whole way down. At this point the rocky trail was becoming more of a physical challenge as I dealt with leg cramps that seemed to seize every time I slowed to pick my lines through the rocks, especially on the descents. 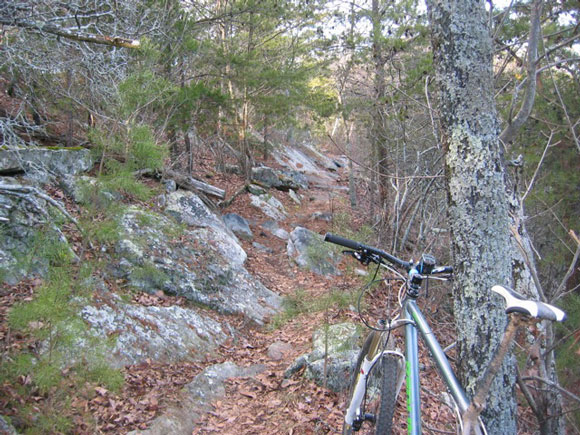 At “the wall” I caught up with two other riders and we walked the steep (but probably rideable by someone) section together. Was this the wall? I honestly wasn’t sure because it was so much smaller than what I had built up in my mind. From here the trail got rockier and the rock gardens seemed to stretch further between breaks so I ended up walking my bike a good bit. All told I probably walked about a mile over the 34-mile course but before I knew it, I caught sight of the radio towers at the end of the trail. From here it was a screaming paved descent down to the finish line.

There was just a small group at the finish area when I arrived and the parking lot was nearly empty which was kind of a bummer but I was glad to be done either way. It took me around 5 hours, 15 minutes which was about 45 minutes slower than the average rider, meaning it should be pretty easy for me to improve by the end of my 29 Trail experiment. With a better start, knowledge of the course, and more training I hope to finish the second time trial in about 4 and a half hours.

The Snake Creek Gap Time Trail is a great event covering some of the best singletrack north Georgia has to offer. If you didn’t make it to the first installment, don’t worry – there are still two more races in February and March! I’m looking forward to going back in 27 days.

Stop taking so many pics and go for that podium spot!

Yeah, but thanks from me for the pics. I’m stuck here with my shoulder in a sling looking out the window at 12″+ of snow wishing I could have been there. Hey at least now I kind of know what to look foward to. If anybody has done the Black Bear Rampage how would the Snake and it compare?

BBR is a great event, but much easier than the snake. Less climbing per mile on average and nothing technical. I did the 17 mile Snake in 2:58 and the 40 mile BBR in 4:20.

Thanks, that’s about what i figured.

I just checked out the Snake site. The times posted by the money class riders are crazy!

Yeah, Thomas Turner is THE MAN. He did the 34 mile race 4mins faster than I did the 17 mile!!!! That’s the difference between a pro and a mere mortal 😀

He was one of the top American’s at LaRuta in November. Rock on!

[…] bike race to remember. Regular readers will recall I rode the first time trial at the start of my 29 Trails in 29 Days challenge and the second race marked the finale of my journey in early February. A glutton for punishment, I […]