I had hoped it wouldn’t come to this. Before my 29 Trail experiment began I wrote out a list of all the trails I wanted to ride and the list definitely didn’t include Arabia Mountain. Not that it isn’t a great place to ride – it’s just that I had hoped to avoid riding anywhere that wasn’t mostly singletrack. Not only is the Arabia Mountain path NOT singletrack, it’s also paved. Yuck. 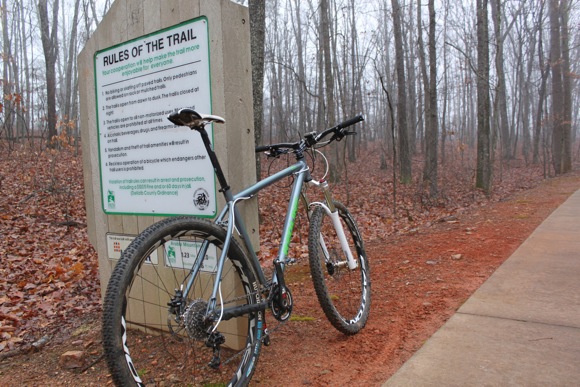 With just a few days to go to my deadline and hard rains overnight, I can decisively cross off Fort Yargo, Blankets Creek, and the Chattanooga area trails off my to-do list – it just ain’t gonna happen. Instead I’m looking up dirt roads and paved paths and trying to figure out which trails drain the best so I can get to 29 Trails before Saturday. 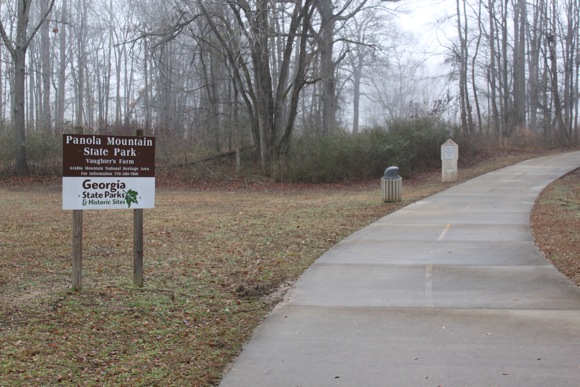 So yesterday I did what everyone else does when it rains: I stayed off the trails and jumped on the pavement. The Arabia Mountain PATH starts in downtown Lithonia, GA and runs through Panola Mountain State Park. The scenery is great and the path isn’t as straight and flat as rail trails like the Silver Comet (which is also a decent choice when it’s raining and you want to protect your bike from gritty fire road rides).

I started at the Stonecrest Mall parking lot and rode toward Panola State Park. It was cold and misty at the start and conditions wouldn’t improve during my ride (or the rest of the day for that matter). Still, I passed several walkers but mostly had the trail to myself. There’s one section where the path traverses an exposed granite section and just for a second I felt like I was riding a real mountain bike trail. But then it was over. 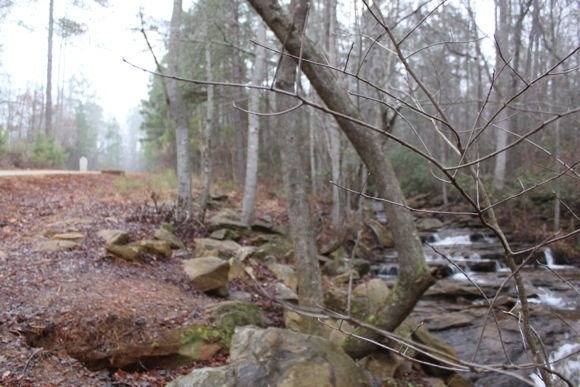 I decided to turn around after 30 minutes which put me right at Hwy 212. I didn’t make it to the abandoned golf course at end of the line this time. I’m told someday there will be singletrack mountain bike trails in this area but even if there were today, I wouldn’t be able to ride them because of the rain. Back at the car, my GPS said I rode almost 15 miles in an hour – a good workout I guess. I just wish I could have ridden on dirt.

Miles are miles. Gotta get them where you can. I’ve got a nice paved ride I can do from my house, 2.7 miles of road gets me to the norhtern end of the Palmetto Parkway bike path. It parallels I-520 for a little under 5 miles. Round trip I get just over 15 miles, and it’s hilly. Good workout, not that boring…but not singletrack either.

As dgaddis said, miles are miles. Especially with the weather we’ve all been having, no one could have predicted this mess!! I would go for a bike path clear of snow at this point!!

Concurred, Miles are miles. Not a bad little trail when there’s no where else to go it looks like…
Beats a spin class for sure.

Paved? Paved! Clean bicycle. What has happened to you? Better get back to Dawson Forest and look for some RED MUD. Great writeups though. Later,

what happened to trail 24?

Ooops, guess I got ahead of myself with the title. Fixed.

@trek7k ,learn how to wheelie really slow and then cross that water lake crap thing 🙂