On Friday afternoon I drove to Conyers, GA and the Georgia International Horse Park, home of the 1996 Olympic mountain bike course. It’s the only Olympic course on US soil which is pretty exciting, but for those of us who live in the area we sometimes take it for granted. There used to be an annual 24 hour race on the course (24 Hours of Conyers) and for those who watched the documentary 24 Solo, it’s the course where Chris Eatough races for his 7th World Championship. 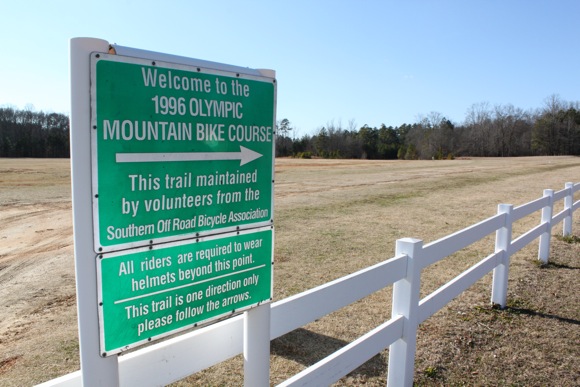 Shortly after the Olympics the course fell into disrepair and mudhunny tells me she couldn’t even follow the trail just a year later. Fortunately the local SORBA club picked up the ball and continues to maintain the trails today. Of course there have been a few changes since the 1996 games but you can still see the wooden TV camera platforms placed at strategic turns and the yellow course boundaries painted onto the granite. The photo below shows where the original course vanishes underneath the golf course sand trap and and green. 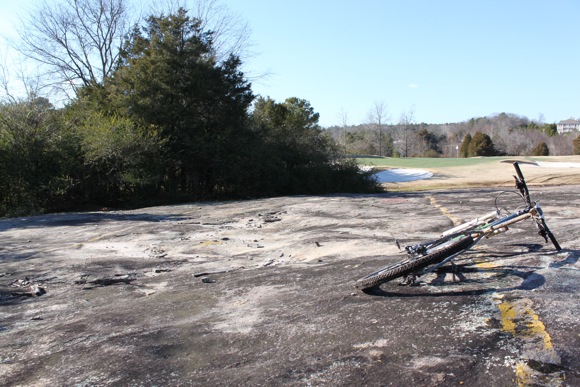 On Friday I decided to start on the “Steeplechase Loop” which begins in the field beside the main parking lot. I’ve ridden here dozens of times but for some reason I started going the wrong direction on the trail, ignoring the “Wrong Way” signs along the way. Oh well, I only ran into one other mountain biker and a trail runner and neither of them seemed to mind. This section of the course is wooded and generally pretty rolling with only the occasional root garden to make things challenging.

Riding back across the field and past the parking area, I crossed the divided parkway to access the “Granite Loop.” The street crossing is easily the most dangerous part of the ride – for some reason the sharp, steep curbs were never cut for a bike crossing (4 of them total) PLUS someone decided to plant bulging evergreen trees in the median that make it impossible to see oncoming traffic. Peeking around a tree I waited for the speeding cars to pass before sprinting for the other side of the road. 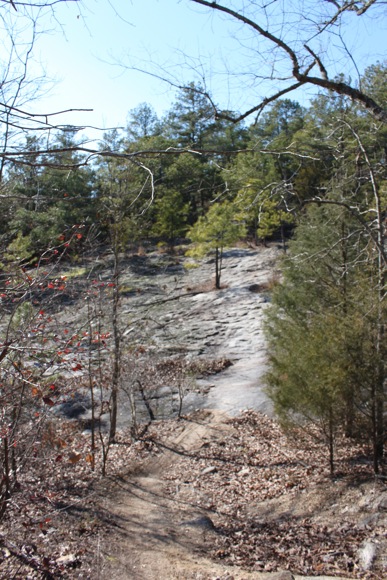 The second half of the course is completely different from the first and features long stretches of exposed, decomposing granite tread and quick lung-busting climbs (the photos never do it justice). I always forget how much of a beating my hardtail takes on the granite – it’s not like the slickrock at Moab at all. After ascending, then descending, and ascending and descending the granite again, the trail dips into the woods where I discovered some fresh trail re-routes full of tight twists and turns. The trail is really quite scenic here, though I doubt that thought went through the minds of the Olympians competing in 1996. 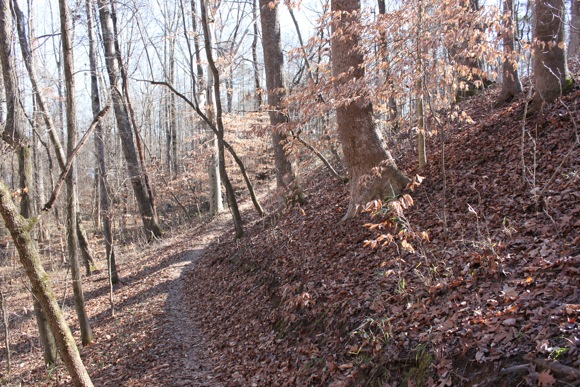 The final climb back up to the granite has always been a challenge for me – in fact I guess you could say it’s my arch nemesis (to borrow dgaddis’s term). The climb itself isn’t that remarkable – average length, moderately steep, and mostly smooth – but for some reason I’ve never been able to ride all the way to the top. I’m either too spent from the earlier climbs or I spin out on the roots at the top – and Friday wasn’t any exception. At the top of the hill my GPS said I had climbed more than 1,000 feet in just under 7 miles which puts the course difficulty into perspective (nearly 150 ft/mile). Not bad for a bike trail on the east side of Atlanta!

I was there the next day, hopefully it doesn’t take too long for the reroute on the granite side to get a little more worn in.

Here’s a fun video from 1996: http://www.youtube.com/watch?v=lfFi0xQbc_o The trails were a liiiittle different than they are now!

Wow, so were the bikes. And I liked the little, ‘this is a road bike, this is a mountain bike’ tutorial at the beginning. Otherwise I could never tell them apart. 😀

I haven’t ridden there yet, REALLY need to get over there.

And FYI – 24hrs of Conyers is BACK!…sorta. New group of folks running the event. Chainbusters is doing it, and they put on some great races.

I’m going, want to ride on a 4 person team. Haven’t actually set up a team yet tho.

I second what dgaddis said, I really want to ride there!

I noticed the 24 hr race was back to. I think doing one of those as a team would be way fun!

I’m glad to know I’m not the only one who can’t seem to make it up that big hill on the Granite Loop. It seems doable, but for some reason the last 10 feet just get’s me every time!

Don’t feel bad Hutchr. I’ve never been and can tell you i prob wouldn’t make it either. It is on the list for this season and ill be able to report back then.

Awesome! Would love to get down there. I spent tons of time in the ATL area in my younger years- had no idea those trails where there…..gah!