It’s day four of my 29 day trail challenge and I’m already falling behind. We got about 5 inches of snow here in Atlanta on Monday which makes mountain biking difficult, though obviously not impossible. The real problem, however, is the road conditions which meant my plans for riding outside the city yesterday had to be postponed.

Instead, I decided to hit up one of the closest trails to my house in a little park called Ira B. Melton. GoldenGoose and I agreed to meet up there in the afternoon in hopes that the sleet and freezing rain would be done by then. I gave myself 30 minutes to ride the roughly 3 miles on the road to the trail and I quickly realized that wasn’t enough time – the roads were basically a teflon-coated mix of ice with small patches of slush. 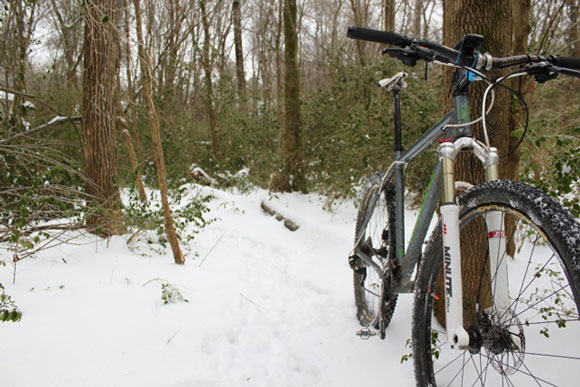 At the trailhead, I got word from GoldenGoose that he wouldn’t be making it all the way due to two flat tires by the halfway point (you can read more about that on the forums). Easing my bike onto the trail I was surprised at how much easier it was to ride than the road had been (though still not easy by any stretch). Snowboarders talk about the glory of “first tracks” in fresh snow but I was relieved to see that a few hikers had blazed the way for me earlier in the day. For one thing, their footprints made it easier to follow the trail but they also served to pack things down a bit.

As far as I know, the trails at Ira B. Melton aren’t officially open to bikes, nor are they officially closed to bikes either. IMBA’s stance on this type of arrangement is pretty harsh, saying that mountain bikers should only ride where they’re expressly allowed. In my experience at Ira B. Melton, hikers are very friendly and are more than willing to share the trails, especially since many of them choose to walk with dogs off leash (a similar gray-area trail use). 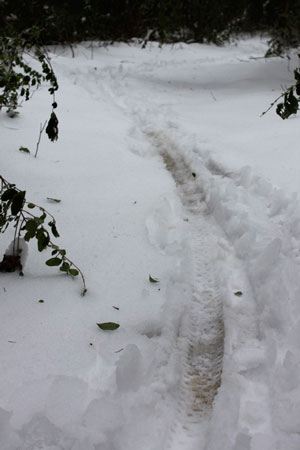 The 1.1 mile trail loop at Ira B. Melton is normally sandy to very sandy and the snowy conditions really weren’t that much different. With a thick crust of ice on top of 5 inches of powder, my tires provided a satisfying crunch as I dodged low tree branches weighed down by the snow and ice.

After completing trail #2 of my 29 trail challenge I jumped back on the road for the slog back home. Although the round trip was only about 7 miles it took me an hour and a half and I felt like I had ridden much farther and much harder. The road portion seemed like an extension of the trail and the ruts I followed along the way were my singletrack. I saw only a few cars along the normally busy route which added to the feeling of a real mountain ride.

With no sign of the ice and snow melting anytime soon I’m a little worried about falling behind on my goal of riding 29 trails in 29 days. Clearly I’ll need to double and triple up in the coming days and weeks to get back on track. Then again, this wouldn’t really be a challenge if it weren’t January!

Videos
Riding all the Bikes With Vincent Tupin [Video]
Trails
Trail 19: Dawson Forest
Trails
Trail 29: The Trails at the Beach
Culture
29 Trails in 29 Days: Tools of the Trade

I rode around some trails around my neighborhood yesterday, and you’re right, the snow sucks the life out of you. I’d love to try a proper snow bike and see what the difference feels like.

I do like how the snow cleans your tires off!

I attempted to ride Monte Sano and I had a hell of a time keeping traction. I might have spent more time sliding then rolling!

I can’t even believe how cold it is biking here in canada.HAhahaa,it’s still fun though but I wish it was summer again. 🙁

And I’m runnin’ with Maxxis Hookworms on my Giant Anthem Advanced,it get’s pretty slick,especially on ice. 😉

trek7k, I’m glad to see I’m not the only one riding a hardtail!

Looks like your challenge just became, well, more challenging. We know you can do it though, and look forward to seeing your progress.

This is a daily occurrence when you commute year round up here in Minnesota. Slogging it is very satisfying at the end of the day though, and it’s great navigating through tough areas when cars are having trouble.

Yes Sir, I foresee some long days in the saddle ahead!