I didn’t want to wake up for my ride this morning. As I closed my eyes in bed the night before, I saw flashes of singletrack – random trail features – that just wouldn’t go away. It reminded me of my college days when I’d spend hours playing Goldeneye on the Nintendo 64 and would “see” myself, gun extended, wandering through maze-like worlds in search of my target. This 29 Trails in 29 Days experiment was starting to get intense.

Just before 6am I woke up, scarfed down some cereal, and drove about an hour north of Atlanta to Dawson Forest. This was another new trail for me and the promise of 20-ish miles of trails in a 10,000 acre preserve was just enough to get me going. I arrived at the trail at around 7:30 and saw a few other cars in the parking area, most of them hunters. I checked the info board to make sure the trails were open (they’re periodically closed for special hunting days) and started down the crunchy, frozen mud on the blue trail. 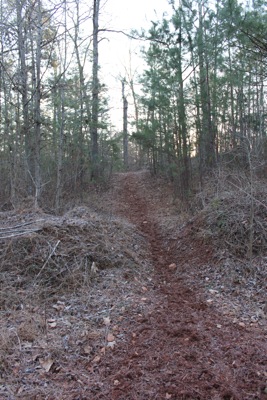 Dawson Forest is owned by the city of Atlanta, purchased from Lockheed in the 1970s. It was originally home to the Georgia Nuclear Aircraft Laboratory and word is that a 3 acre section still had elevated levels of nuclear radiation as recently as the late 1990s (I only read this AFTER riding – could it be the fenced section at the main trailhead?). Over the past few years the city has considered building a new airport to relieve congestion at Hartsfield International (the busiest airport in the world) OR to build a reservoir capable of pumping out 100 million gallons of water per day to the northern suburbs. Either way, I had to ride the trails in case they weren’t around ten years from now.

Map in hand, I decided to ride the blue loop, a 9.4 mile trail that seemed to cover a good bit of the tract. After the first mile or so I encountered some major horse damage on the red clay trails and was thankful the ground was still frozen during my ride (temperatures would reach the 70s later in the day). Some spots were so bad that I had to walk through the ice crusted mud holes and I could see other spots where the horses themselves slipped to find traction on the nasty trails. Don’t horseback riders respect the trails enough to avoid them when they’re wet? 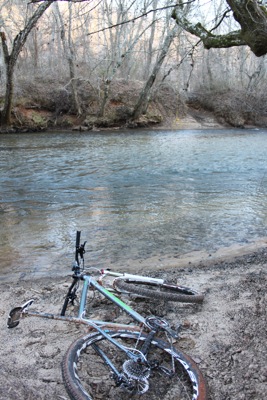 At the 2.5 mile mark I got to the Etowah River Ford and I have to say I wasn’t prepared for what I found: a swift moving, wide river crossing that was easily 3-4 feet deep at the middle (I actually couldn’t see the bottom). For about 10 seconds I considered taking my shoes and socks off and crossing the river but then I remembered the temperature was 30 degrees and that I’d be walking across the river bottom barefoot. Not wanting to climb back up the horse-mud trail, I struck out on Railroad Rd. to join up with the orange trail instead. Before turning around I rolled my tires in the water to clean the mud off but found my disc brakes iced over as soon as I started to pedal.

According to the trail use rules printed on the back of my map, “horses and bicycles should not be ridden along roadsides unless it is marked as a designated trail.” I found it strange that bikes would be restricted from the roads so I promptly ignored the rule for the rest of my ride and didn’t see a single vehicle along the way. 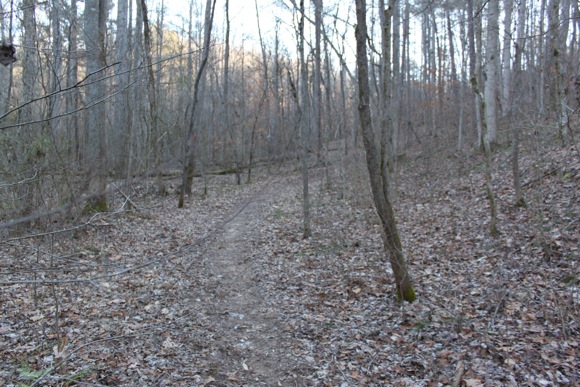 The orange trail was mostly more of the same – muddy and cruddy. It wasn’t just the mud and pocked trail surface that bothered me – all the “trails” were really just wide, overgrown forest roads it seemed. After rounding the lollipop portion of the orange trail I took a shortcut on the road and saw a hunter, rifle in hand, emerging from one of the side trails. We exchanged greetings and headed in opposite directions.

Back at the parking lot, the GPS said I rode a little over 12 miles and it was easily my most miserable ride yet. I tried to imagine the trail in better conditions – the summer perhaps – but I decided even in the summer I probably wouldn’t be back. That is, unless I need to catch a flight out of town.

It’s been about a year and a half since I’ve been there… the trails weren’t good enough to bring me back (so maybe 4 stars was a little much, sorry!) However, it sounds like the trail tread was in much better condition when I was out there. Leave it to the horse people to destroy the trails when the conditions are bad.

When I rode there I found some great sections of singletrack, but it seemed like all of the nicest trails were located furthest from the trailhead. I.E. it took a lot of riding on boring doubletrack to find them.

Hopefully the rest of your challenge goes better than this!

Its been only a few weeks since I have been there as well. I agree the trails there are really just not good enough to bring me back. Not to mention the $5 fee to ride there. The way they are cut is typical to horse trails. They use the fall lines a lot, its goes up, then it goes down. So, overall bad design if you want to enjoy a ride on a bike there. I’m sure that was not even a thought when they cut these trails. Its a shame for me since this trail is only a few miles down the road.

The dirt/clay surface of the trails is really crappy when its any kind of wet. I’d advise riding when its completely bone dry there. When I went there a few weeks ago I got stuck in some rain and that crap got so sticky. The mud kept packing and collecting on my tires. There must have been a couple of inches on them. they felt like bricks with all that weight.

There’s a lot of usable area there it be great to cut bike specific trails there.

There is supposed to be a shallow ford near the former nuclear site that was put there for military guards to cross in vehicles when the area was restricted and guarded. There are a bunch of bunkers, foundations, bridge foundations. All this was for the “research” facility. The facility was for research as to damage cause due to exposure to mass radiation to equipment, rabbits, trees ect. There was a above ground nuclear reactor that could be raised for exposure experiments. This is often called Georgia’s “Area 51”. Atlanta did buy it for building an airport. An airport will never be built there because it is in the foothills of the mountains. DUH! Wonder who the politition was that benefitted from the sale. Maybe SORBA can takeover and fix the trails. Red mug does suck! Later,