After the world-class singletrack riding we had just experienced in Lake Tahoe and Downieville, I was excited to get to one of the places that our trip centered around: the San Francisco Bay Area.

But when I pulled up to the first trail on our list of places to investigate, Wildcat Canyon Regional Park (it hadnt been added to the Singletracks database yet), I was disappointed to find no information and a very uninviting trailhead. After doing a Google search to try to glean some additional information and figure out if we were in the right place or not, I discovered that basically all of the singletrack in the park was off-limits to mountain bikes. Gravel roads just didnt seem worth the effort, so we drove on down the east side of the San Francisco Bay to Redwood Regional Park. 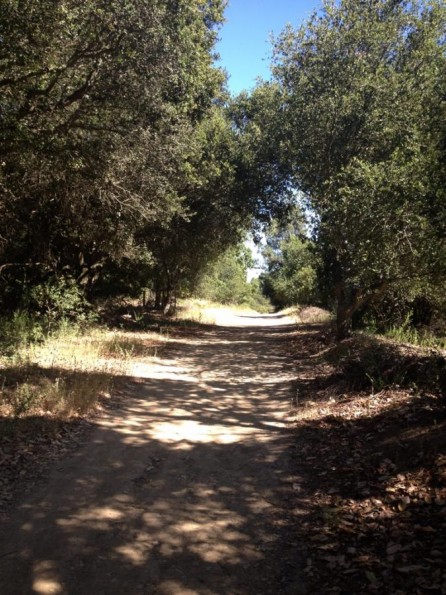 While Wildcat Canyon wasnt in the database, Redwood Regional Park was listed, and the information I read sounded pretty positive. When my wife and I got out of the car and started to ride, though, we were immediately faced with a stiff doubletrack climb that was right on the borderline between barely rideable and hike-a-bike. Hoping that this old roadbed would turn into singletrack eventually, we pushed our bikes to the top of the ridge and carried on. 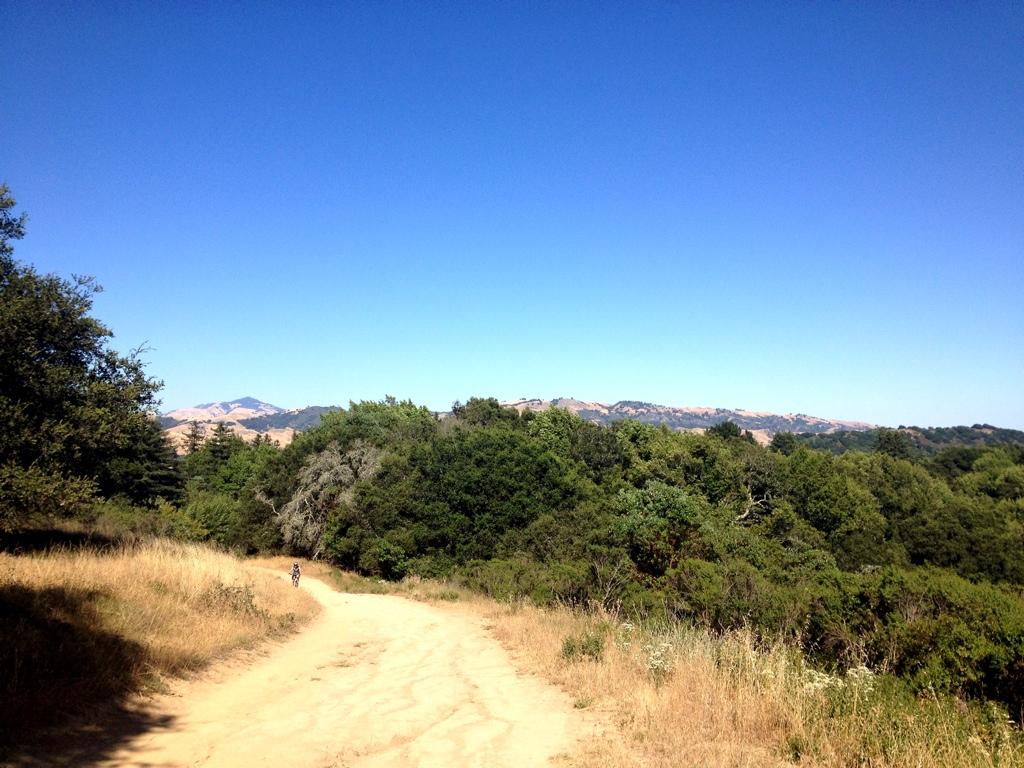 At least some of the higher parts of the “trail” had OK views.

We began to pass several singletrack trails dropping off the top of the ridge into the park, but every single one had a large “no biking” sign posted on it. The entirety of the bike-legal loop in Redwood Regional Park is essentially an old forest road that follows the ridge around the valley–and none of it was singletrack. There are plenty of trails crisscrossing between the ridges and through the valley below, but all of it was off limits to mountain bikes. 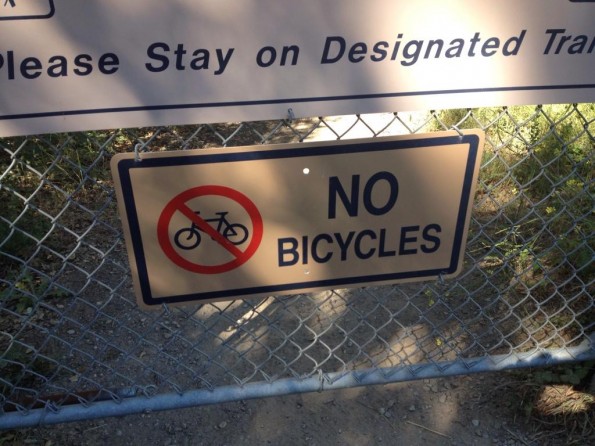 At one trailhead in Redwood Regional Park, we even saw a sign that threatened mountain bikers with a $275 fine for “cross country riding” or “singletrack riding,” as well as “reckless riding,” “excessive speed,” or “failure to warn or call out before passing.” And while this sign keeps things arbitrary and subjective enough to give any ranger you look at the wrong way a reason to ticket you, many other parks included a specific speed limit, most of them maxing out at about 15 miles per hour. 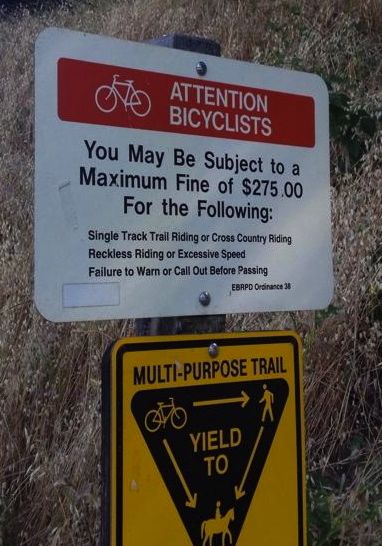 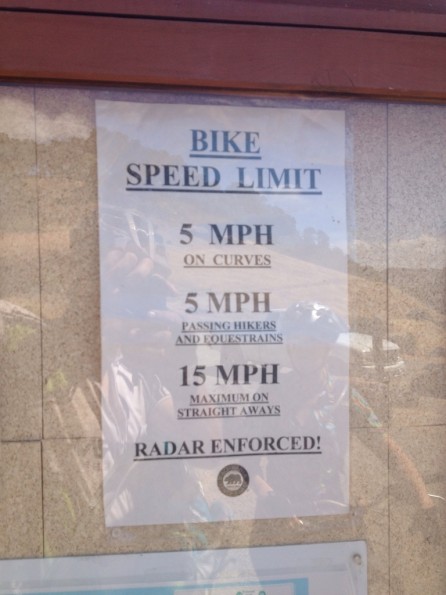 What frustrated me even more was that the wide doubletrack trail–again, the only trail that was bike-legal–was very popular with hikers and dog walkers (who all disobeyed the numerous signs stating that dogs must be on leash), but we didnt see a single hiker coming up any of the singletrack trails. All of the hikers would look at us as we passed with annoyance and disdain, even as we called out a friendly greeting.

The general vibe that we got any time we passed hikers was cold and unfriendly. I’ve ridden in numerous states across the nation and regularly meet other trail users, both hikers and equestrians, and I don’t recall ever having a chillier reception. This response was floating around in my head but I managed to keep it from exiting audibly: “Seriously, if you’re going to be pissed at my very existence and the fact that I am using the only trail that I am allowed to ride, why don’t you take your mutt and your screaming child and hike on one of the dozens of trails where bikes aren’t allowed.”

Part way through the Redwood Regional Park loop, I dropped out of the park and down the opposite side of the ridge into Joaquin Miller Park, which is home to just about the only bike-legal singletrack that I found in the East Bay Area. Joaquin is a tightly-packed network of poorly-marked singletrack trails, some of which are pretty technical, others of which are smoother. While thiswas legitimate singletrack and probably fantastic by East Bay standards, compared to many of the other trails that I had ridden across the country on this trip, Joaquin was pretty unremarkable. 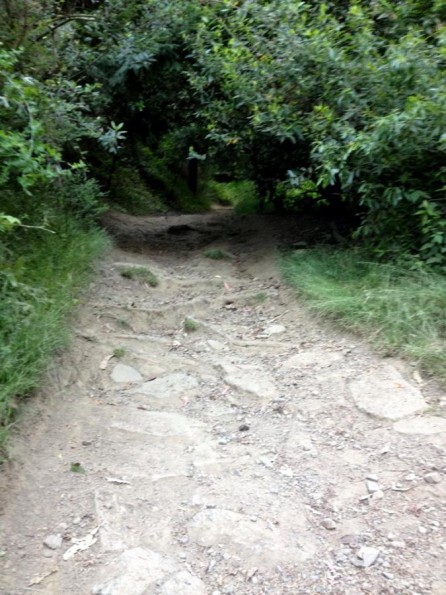 End of a technical descent in Joaquin Miller.

If the situation from Redwood Regional Park was a one-off occurrence, that would be one thing. But the story was repeated almost everywhere we went: Coyote Hills Regional Park had what looked like some fantastic singletrack trails right on the Bay, but only the old gravel roads were bike legal. Greenbelt Park in Hayward had some legal in-town trails, but they were pretty unkempt and mostly doubletrack. 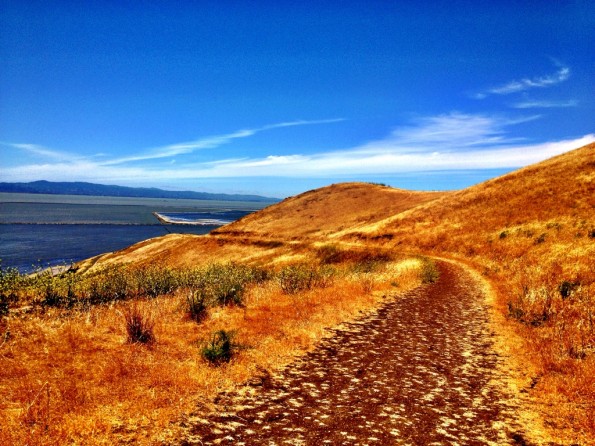 One of the legal dirt roads at Coyote Hills. 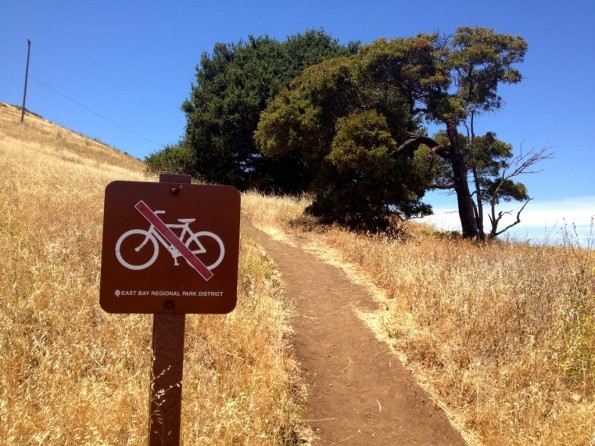 After getting burned on so many of the trails that I’d picked out to ride in advance, I hit the Singletracks database and a couple of other websites to see if there was anything in the East Bay worth riding. The most promising place I could find (aside from the other trails mentioned in this blog post) was the massive Mount Diablo State Park about 15-20 miles inland. Mount Diablo promised a massive network of gravel roads as well as singletrack. The thing that made Diablo look interesting, at least from the reviews we read, is that there is apparently a lot of discrepancy between the websites, trail maps, and trail signs about which trails are actually open to bikes. Still, I never read anything that advertised a massive system of singletrack that is open and welcome to mountain bikes, so we decided it wasn’t worth our time.

Anthony Chabot Regional Park has, again, many miles of old forest roads to ride, but surprisingly also sported about 3-4 miles of decent singletrack paralleling one of the access roads. After mucking around on doubletrack dirt roads for the past several days, discovering a mere 3 miles of singletrack felt like striking a vein of gold! 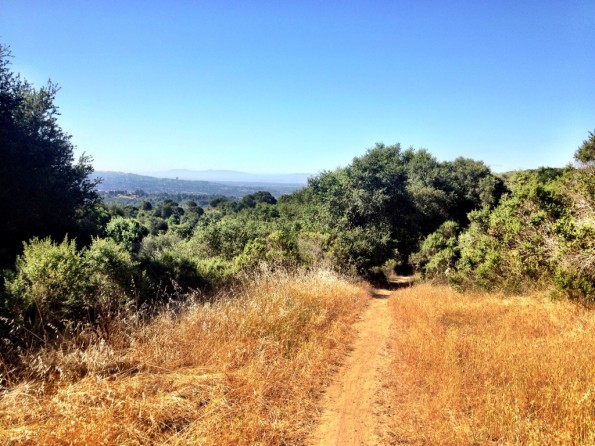 If you are traveling from out of town and still want to explore the East Bay area after reading this blog post, Anthony Chabot is also a great spot to camp, with the $20 per-night fee covering an attractive campsite beneath the massive eucalyptus trees and bath houses complete with hot showers.

If I have ever ridden in an area that is less friendly to mountain bikes than the East Bay, I dont remember it. I’ve been to places where there just isn’t any green space or hills, or there just aren’t really any trails in those hills to ride. But neither of those is the case in the East Bay. And it’s not like the trails that are there would be too difficult for mountain bikes to ride–many of them looked immaculately groomed and butter-smooth. Finally, it’s not like these areas are even designated Wilderness or National Parks, two areas that have been historically closed to mountain bikes

The only reason that I can think of for this hostility is that the rangers, park officials, hiking groups, and equestrian groups just don’t want mountain bikers on their trails. They must be exceedingly selfish and unwilling to share access, and since many of those organizations have so much more clout and history than the mountain bike advocacy groups, they got their way. With the most recent scientific studies showing that a mountain biker has much less impact on a trail than a horse and barely more than a hiker, any supposed environmental concerns are little more than an excuse to mask the real reasons: selfishness and an inability to share.

With such a hostile environment and such tight restrictions, I can see why the locals are infamous for poaching trails. If I lived in the area (and couldn’t find a reason to leave), I could possibly see myself flipping the bird to the law and partaking of the forbidden fruit. Unfortunately, it seems like when mountain bikers break the law (and get caught at it or advertise what they are doing) it only adds fuel to the anti-mountain bike engine and makes legalizing singletrack even more unlikely.

It is this unfortunate combination of factors that has led me to wonder, “is the East Bay the most anti-mountain bike place in America?” While I can’t answer that question definitively, after spending the better part of a week riding in the East Bay, I cannot honestly recommend that anyone from out of town, even from as close as San Francisco just across the bay, come here to ride with the current trail offerings. Take your money, the revenue that your tourism could bring to the area, somewhere else that is worthwhile.

Thankfully, after the letdown that was the East Bay, we had much more positive experiences (and much better trails) in store in the near future! Stay tuned for the next installment in my road trip series.

Your Turn: What is most anti-mountain bike place you’ve ever been?