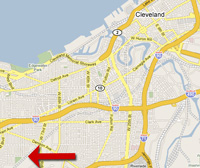 map by Google, photo by chris_lori 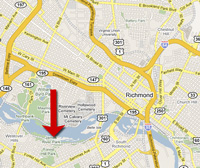 Yep, I have to agree – James River Park contains some of the best urban mountain bike trails in the southeast. The park is host to tons of mountain bike races and events each year and is located just across the river from downtown Richmond. My southeastern runner-up, the Morningside trails near downtown Atlanta, don’t even come close. 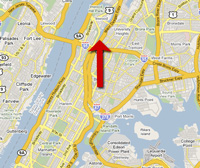 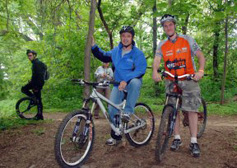 A real mountain bike trail on the island of Manhattan? Fahgeddaboutit. Somehow trail builders managed to squeeze in 3 miles of trail in one of the most densely populated cities on earth and now the park is a popular spot for a summer race series. 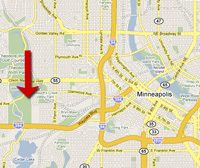 map by Google, photo by Gopherhockey

Theodore Wirth Park boasts three and a half miles of fast, flowing singletrack mountain bike trails near the heart of downtown Minneapolis. Completed in 2005, riding these wooded trails feels like you’re miles from anywhere and sport some technical spots that will keep even advanced riders on their toes!

1. The I-5 Colonnade Trails (Seattle) 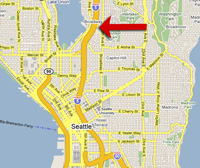 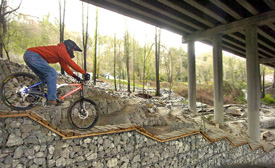 You know a mountain bike trail is urban when the name of the trail starts with an Interstate Highway designation. The I-5 project is truly a wonder of trail engineering and makes use of some land that would otherwise remain vacant (who wants to build underneath a highway after all). These trails are a true testament to the will of mountain bikers to create places to ride and will be the gold standard against which new urban trails will be judged for years to come.

Progression
Pro Skills: Braydon Bringhurst Offers His Best Tips for Technical...
Culture
News: Montana Enduro Series Announces 2015 Tour Stops
Progression
News: MTB Clinics for Women (The Stronger Gender) with VIDA...
Gear
If You Had $2,500 to Spend, Would You Buy a...

[…] What’s the best way to build a great urban mountain biking park in Grand Rapids? Look at what other cities have done well, copy it, and make it better! Over the last 5-10 years, mountain bikers who live in urban areas have worked hard to convince their cities to build, or allow them to build, mountain bike trails in their parks. Where are these parks? They are in cities of many sizes in all parts of the country, from Philadelphia, Seattle, and Manhattan (yes, Manhattan) to Minneapolis, Richmond, and Cleveland. Here is a summary of five of the better ones: The best urban mountain bike trail systems in the US. […]

I think it is awesome the Richmond made the list. We really are fortunate, and I hope there are plans to keep improving and expanding the mtbing opportunities in and around Richmond. Here’s a recent news article from the local paper about the JRPS trails, including a slideshow: http://www2.richmond.com/content/2010/may/19/biking-downtown-richmond/