Enduro racing continues to spread like wildfire across the Western USA–and the world, for that matter. The combination of beautiful locations, rowdy race stages, and a jam-packed weekend of riding and partying has proven to be a winning formula in the eyes of casual and serious racers alike.

Having lived and ridden my mountain bike in Montana, I can personally verify that the rugged terrain, formidable mountains, and remote locales found in one of the wildest states in the union will make this one heck of a series!

Here are the deets on the individual series stops, courtesy of the Montana Bicycle Guild: 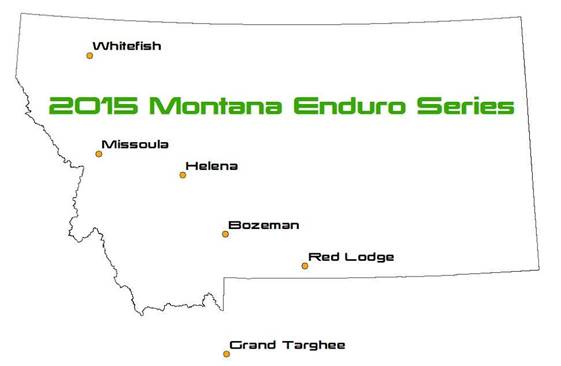 The series kicks off with the Helenduro, one of the oldest enduro races in North America.  Presented by the Gravity Guild and The Garage.  #originalenduro.

The second race takes place in Missoula, MT, and brings in another classic enduro race into the Montana Enduro Series, the Hair of the Dog Enduro.  Presented by Missoula XC and Missoula Bicycle Works.

Just when you thought we couldn’t get any dumber, we go and totally redeem ourselves.  The Montana Enduro Series will make its third stop in Gallatin County this season.  Presented by the Dirt Concern and Alter Cycles.

That’s right, the Montana Enduro Series is going south of the border.  There are some seriously fun trails at Wyoming’s Grand Targhee Resort, so we’re going to race ‘em for the fourth stop on the series.  It’s going to be a weekend-long celebration of the Tetons.  Presented by Grand Targhee Resort and Habitat.

The fifth stop of the Montana Enduro Series will take place at the gateway of Glacier National Park in Whitefish.  The views, food, and trails promise to make this race one to remember.  Presented by Whitefish Mountain Resort.

The 2015 Montana Enduro Series will make its sixth, and final, stop of the series at Red Lodge, MT.  There’s a special finish planned for the series that you won’t want to miss.  Presented by Red Lodge Mountain and Red Rover Bicycle Collective.

For more information on this race series, click on over to MontanaEnduro.com