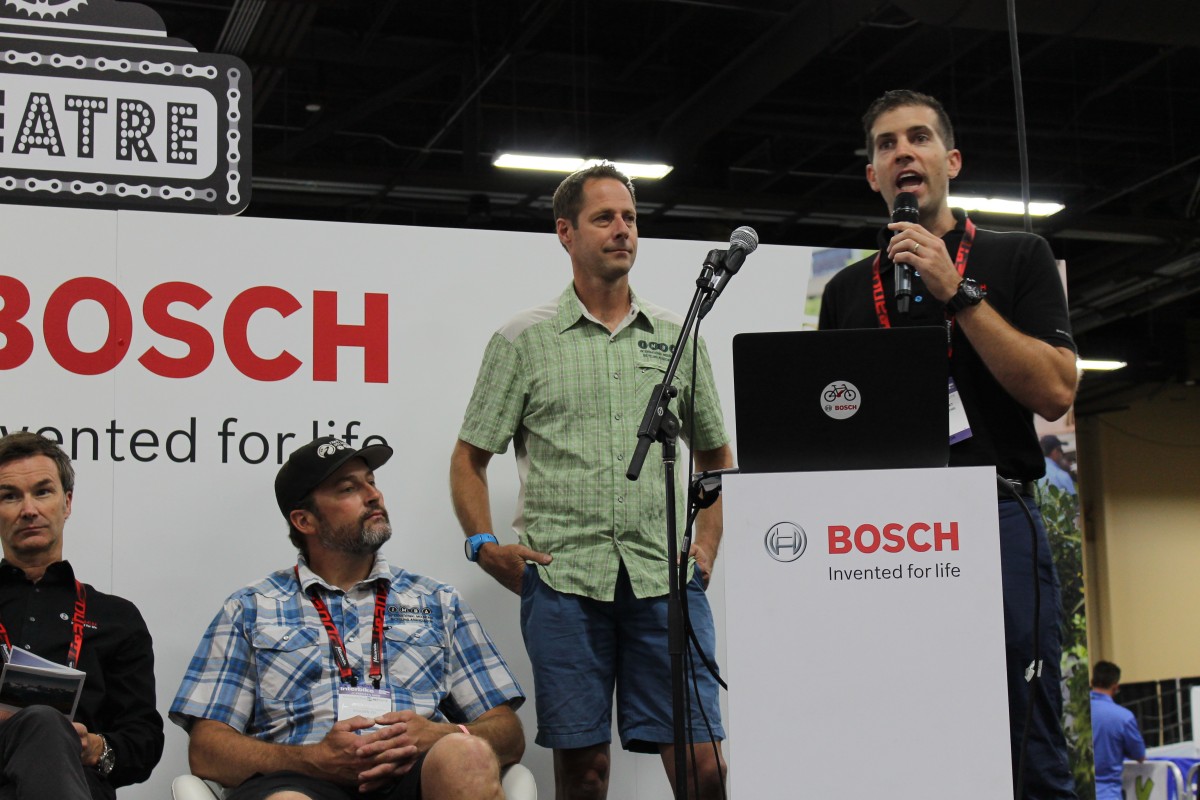 This study was conducted in the fall of 2015. A specific test loop was used with a variety of different trail types such as climbs, descents, climbing turns, descending turns, and more. Soil displacement was measured at set intervals around the test track, and at multiple points across the width of the trail. Both soil excavation from each test site and soil excavation from above the test site, relocating soil into the site, were analyzed.

As a result of their study, IMBA hypothesizes that,

“Physical impacts to trails from eMTBs will likely fall somewhere between those caused by mountain bikes and motorcycles. We expect that they will much more closely resemble those of mountain bikes.”

While they hypothesize that eMTBs are much closer to the impact of mountain bikes, IMBA also:

“. . .expect[s] that eMTBs may lead to more soil displacement under certain conditions, such as through turns, including bermed turns; on ascents and descents; and where there are abrupt changes in trail conditions.”

IMBA’s approach to eMTBs has not changed as a result of this study–at least, not yet. IMBA still sees mountain bikes as solely non-motorized vehicles, and “federal land management agencies currently classify eMTBs as motorized use,” according to IMBA. As a result, the motorized/nonmotorized position paper that IMBA published still stands, and currently the issue is pretty black and white based on the decisions handed down by the land managers: eMTBs are currently allowed anywhere that other motorized traffic, such as dirt bikes, are allowed.

After the presentation was completed, a panel of experts participated in a Q&A session to lend more insight to the eMTB controversy at hand. That panel consisted of Mark Eller, communications director for IMBA (standing in for a land manager from the BLM who could not attend); Claus Fleischer, Senior Vice President for Bosch eBike Systems (sponsor of the eBike Theatre); Chris Cocalis, President of Pivot Cycles (not currently a manufacturer of eBikes); Jim Felt, Founder of Felt Bicycles (an early adopter and producer of eBikes and eMTBs); Chris Nolte, Founder of Propel Bikes (representing independent bicycle dealers); and Hans Rey, MTB Legend.

It was interesting to hear the opinions vary across the board as the panel progressed. Some panelists, especially Jim Felt, advocated strongly that we as an industry need to find a way to gain access to nonmotorized mountain bike trails for eMTBs. Others, such as Chris Cocalis, took a much more conservative approach. Personally, I found Hans Rey’s comments to be the most insightful. Hans has owned and ridden an eMTB for years (granted, mostly to run errands in town), but his main concern is getting eMTBs classified appropriately. He doesn’t believe that they should be classified as “mountain bikes,” but also that they are nowhere near the level of a motorcycle. He thinks that trail access should be granted based on a more accurate eMTB classification.

IMBA references a generally-suggested eMTB classification in the official press release from their study:

However, getting land managers to understand these nuances will pose a serious challenge, as many anti-mountain bike advocates already tend to lump non-motorized mountain bikes into the same category as full-fledged motorcycles. One thing is certain: nothing is certain yet. The controversy still rages, and while it’s great to see more science being released around these issues, science has never been the determining factor in trail access issues. If it was, mountain bikes would be allowed in Wilderness areas, and horses would not.

Stay tuned–we’ll keep reporting on this topic as it develops.

damnit, we’re supposed to have killed them with fire already!

eBikes of all kinds make sense. The “not on my trail” perspective on e-Bikes are like the hiking organizations that doesn’t want to share with mtbs, or the ski resorts that cant find a way to share with snowboarders, or the skateparks that ban scooters and bmx bikes, etc. Of all groups, cyclist should appreciate what these don’t want to share, “purity of use” type arguments.
If e-bikes are bicycles, by some agreed upon definition, and not underpowered motorcycles, then they should be embraced by biking organizations like IMBA. Otherwise, e-Bike users will just organize separately, just like mtb bikers did not too many years ago. That will just further divide the already fractured voices of the biking communities.
Heck, mtb biking seems to change some every year, who is to say that eMTB’s don’t have a place on trails. Did mtb need 29’ers, 650b, 1x, electronic shifting, carbon fiber DH frames, Red Bull Joy Ride, etc. eMTB will undoubtedly have a place, its just not as clear where yet. Maybe they are not allowed on certain trails, and the “share the trail” signs need an update with eMTB yielding to all others. I live in a hilly area and one of my neighbors gets up the hill on his road e-bike. I don’t see why it would it be so wrong to allow someone to get up the same kind of hill on a trail on an eMTB. I’d even say that my local hiking organization seems to intentionally design new trails that are so steep that only the most fit mtb riders even try, so new riders and kids never even try. eMTB’s could help. You can alway bring out the “environmental impact” arguments that seem to make mtb advocates cower. Our local mtb park gets trashed every summer and that is great, because it means it getting used a lot. Its not a museum. IMBA spent money to quantify the obvious, a little bit heavier, and a little bit faster eMTB bike will have a little bit more tail impact.
Banning or severely curtailing eMTB’s use will divide the mtb community. IMBA needs to get ahead of eMTB use cases, reconsider the trail building guidelines perhaps, envision how and when to share, and when not to. They need to be ahead of this, not putting out namby pamby surveys asking you how concerned you are about a new innovation in the mtb world.
Regarding the conflict of interest argument – have looked at the entire IMBA board, it is all conflict of interest, or some might call it a passion for the sport.