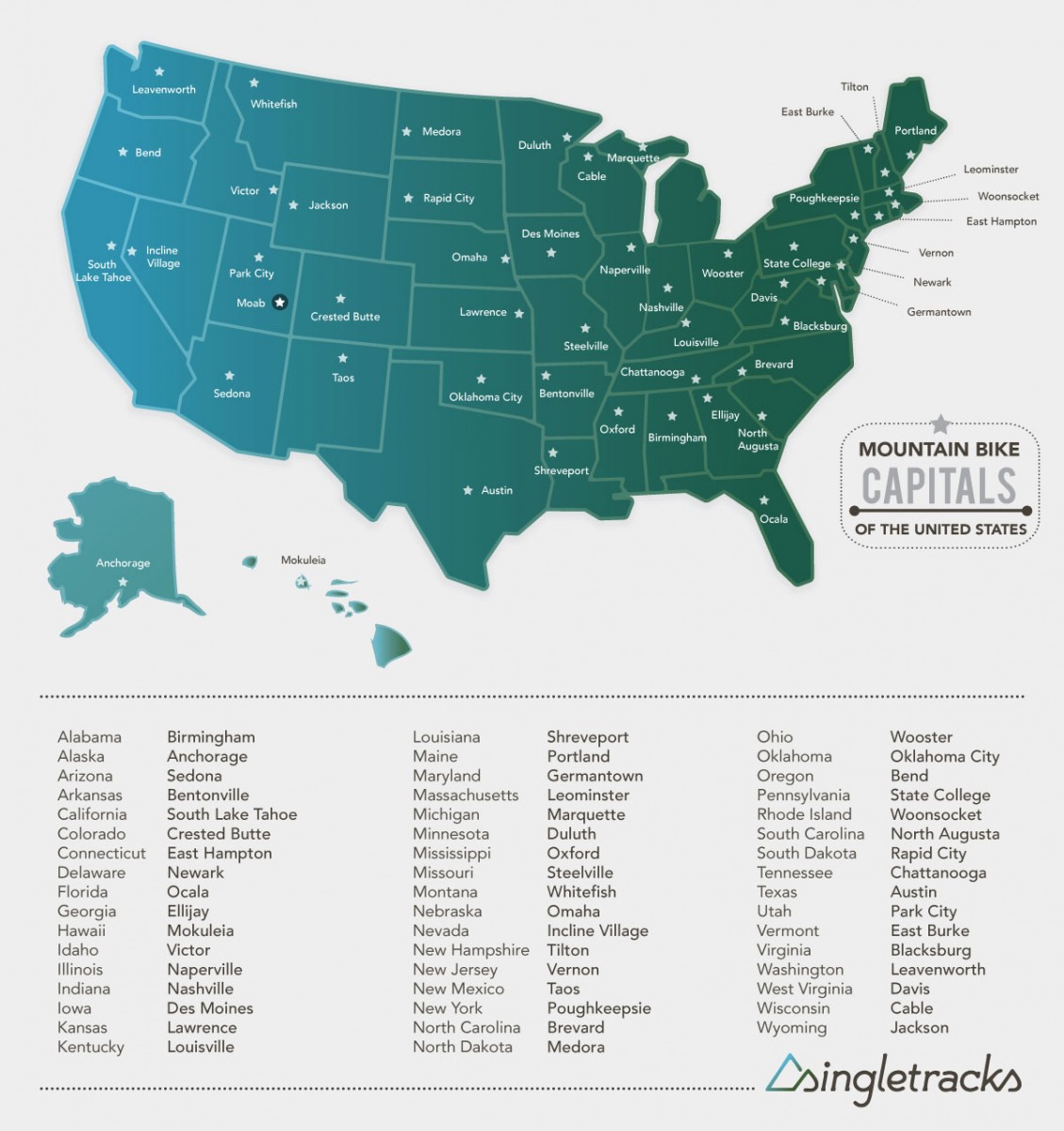 While at first we thought this would be a simple task given our massive database of trail information and reviews from all of the states in the union, achieving a well-rounded list with accurate selections turned out to be much more involved than we initially anticipated. To achieve this list, we ended up drawing on a several different data sources.

First up, we used our database mentioned above, which incorporates reviews and feedback from our hundreds of thousands of mountain bikers, and almost every statistic imaginable including the number of trails, total trail mileage, trail difficulty, and much more. Secondly, we utilized data from a previous survey in which respondents told us what they think the top MTB destinations in the US are. Thirdly, we drew on the expertise of our editorial team members, who are spread around the nation and have collectively ridden in almost all of the top destinations.

When our editorial team put their heads together to talk about what these data sources indicated, we discussed many critical factors, including:

After weeks of deliberation, we finally arrived at the capitals that you’ll see on this list. So without further ado, here are the 51 best mountain bike destinations, state-by-state:

In addition to every map having a state capital, there is, of course, a national capital: Washington DC. By every objective measure, Moab, Utah is the definitive mountain biking capital of the United States. To start, Moab is one of the oldest–and still best–destinations, with hundreds of miles of epic trails and slickrock to ride, and arguably one of the best trails in the world: The Whole Enchilada. Moab is also the king of mountain biking infrastructure, with bike shops, shuttles, guiding, restaurants, a local brewery, hotels, camping, and more. Finally, taking into consideration that Moab is the only destination that showed up as a must-ride for mountain bikers from every single region of the United States in our survey, the choice for national mountain bike capital is clear.

Click to page 2 to keep reading about the MTB capitals.

Mountain Bike Podcast
Fabio Wibmer Talks Confidence, Perfection, and Inspiration [Podcast #272]
Trails
The 3 Best MTB Road Trips to Take in the...
Trails
4 Reasons Why South America Should Be on Your Bucket...
Trails
The Top 10 Mountain Bike Destinations, As Chosen by the...

Progression
How to Stay Strong in the Off-Season, Even if You're...
Gear
Why are Good Rain Jackets so Expensive? We had to...
Gear
13 Reliable, High-Quality Mountain Bike Products Designed to Last
Gear
Best Mountain Bike Gifts Under $50
Subscribe
Login
Please login to comment
15 Comments
Most Voted
Newest Oldest
Inline Feedbacks
View all comments

Don’t forget about Fitzgerald’s Bicycles in Victor Idaho!! The MTB authority in the Tetons and beyond!!

Naperville??? Seriously? Most of the trails you guys listed are not even trails they are walking paths. Having lived in Naperville for a few decades I can assure you…You are WRONG!

Thanks Yetiman. A lot of people made the same comment but we haven’t heard any suggestions for a better selection. Unfortunately Illinois just doesn’t have a lot of options. 🙁

I would suggest Chicago for Northern Illinois! Less than an hour to almost everything you listed for Naperville (including the short but awesome SawWeeKee in Oswego). The up-side to Chicago is that unlike Naperville, there are a ton of bike shops, hotels, and food and you are less than 45 minutes from Indiana riding like Rum Village, Imagination Glen, Potato Creek, etc…And the soon to open “Big Marsh” project in Chicago.
I have riden Peoria but not enough to comment…..So Chicago may not be the MTB capitol of Illinois, but Naperville certainly is not!

Illinois: Bad research! Really bad reply. 30 seconds on Google would have fixed that. You are writing on behalf of mountainbikers? You mailed that one in!

Roanoke has Carvins Cove. It’s over 12000 acres of mountain biking.

Wow, so many posters being so sensitive. I guess it just shows that mountain bikers feel strongly about their trails. All in all, for me it’s nice to see the list and see the other locations that riders really like. One state that of course doesn’t get much attention (and rightfully so) is Ohio. And though the current MTB capital may be Wooster. I think there is some momentum building in the southeast part of the state where the terrain is actually quite big and hilly and excellent for mountain biking. There is tons of potential there.

Great selections Adam! For next year’s list, what is a central town for all (or most) of the trail systems you mentioned? BTW, we actually included Vietnam trails in our Rhode Island selection (Woonsocket) since it’s within 25 miles of there. So much great riding close together in the NE!

Great work, I think this article pretty well sums up the best locations. Now, to hit them all….4 years to retirement lol.

Great summary – I now have a more exhaustive list of “must-visits.” As a native of Washington state, Leavenworth is incredible – not only does it offer epic grinders, ripping descents and panoramic views, but also a community full of Bavarian fun. With that said, I have to make a plug for Bellingham, WA – a location Kona happily calls home for its US base. The mix and variety of terrain and general adventure vibe of the community makes it a great destination to visit.

Proud as punch that Davis is listed as the capital for West Virginia! Twas, my intention from the beginning to put Davis on the map. Kudos to the on-going trail building and all the awesome new trails built by the Blackwater Bicycle Association!!! Keeping it fresh! And, to Sue Haywood for all her efforts on the Canaan MTB Festival. Ride on!

This was a really good read. To play on the Moab being the Washington DC of all the capitals, which capital is the New York city…ie the biggest, most diverse, most eclectic, ect. My vote is Crested Butte.