Usually the most famous trails deserve their renown and respect, as they provide those features most mountain bikers seek for maximum entertainment value. However, for a variety of reasons, some trails remain under the radar despite having excellent qualities. For those of us who like to seek out the trail less travelled and still have an outstanding ride, here’s a list of 10 great options.

Don’t worry, I’m not revealing the existence of any underground trails here.  Each of these has been publicized in some way, but if you take the time to seek them out, you will likely feel like you’re raiding someone’s secret stash. 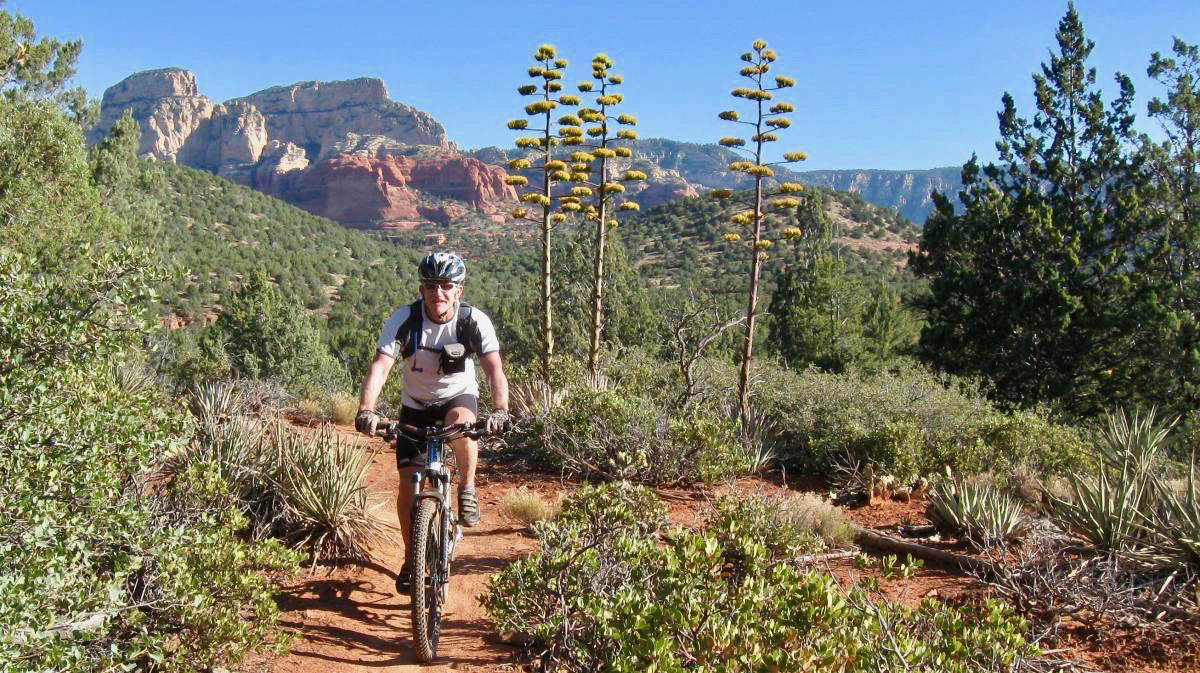 By now, everyone knows all about the marvels of Sedona as a mountain bike destination.  Names like Hangover, Highline, Llama, and Chicken Point are all classics of modern mountain biking lore.  Yet, the large trail complex on the northwest side of town languishes in relative obscurity.  It can be a little more difficult to reach from town (depending on point of origin), somewhat more difficult to navigate, and it does include some less than spectacular trail segments, but this northwest network also has some trails which are every bit as unique and scenic as anything else in Sedona. First among these is the Chuck Wagon trail.

Two things make this loop unique in Sedona. First is the local pinions are thicker and tighter here, making this more of a legitimate forest ride than a desert ride, and the juxtaposition of the greater proportion of green among the red rock and blue sky strikes a beautiful balance.  Second, the trail is suitable for most riders down to lower level intermediates.  In truth, the likes of Hangover and Highline are too much for the average rider, and Chuck Wagon provides a legitimate Sedona experience accessible to almost anyone.  And while the trail lacks the heart-in-your-throat element of Hangover, an advanced rider will have a most joyful time hammering out this loop.  For those with a penchant to go farther, Chuck Wagon links to a multitude of other excellent trails, allowing for an all-day ride if desired.

As the crow flies, the hamlets of Idyllwild and Pine Cove are less than 50 miles from San Diego or Los Angeles, and far closer to the urban sprawl of the outlying suburbs, but culturally and environmentally, the difference is extreme. The San Jacinto Mountains shoot up rapidly above the Southern California valley floor, creating marvelous terrain upon which the locals have built a fantastic network of trails which truly have something for everyone, from mellow cruises through giant pines to huge gap jumps and extreme drops.

One could ride for days on this seemingly ever-growing Idyllwild Park network and never tire of the options.  Whatever you’re in the mood for, it’s in there somewhere.  Want a little bit of everything in one ride?  Easily done.  Want to escape the heat of the valley floor without making a cross country trip?  Here’s your ticket.  Despite being a tiny town, Idyllwild has a fully-stocked bike shop with quality rentals and locals who truly love their trails and are willing to share.

Amazingly, some great, unknown mountain bike areas still exist in the most mountainous, most biked state in the union.  Among these is the incredibly-entertaining Red Hill trail network. What makes this trail’s anonymity so perplexing is its location adjacent to the pleasant town of Carbondale, which sits at the midpoint between the major tourist meccas of Glenwood Springs on I-70 and Aspen, 40 miles to the south.

Easily accessible from the highway that connects America’s most famous hot springs pool and its glitziest ski resort, Red Hill serves up a long, moderately-technical climb, delivering the rider to a roller coaster network, with a myriad of options to customize loops based on your desire for distance and challenge.  The Blue Ribbon trail is aptly named, not just hyperbole, and makes for a superb, rockin’ return to the trailhead.  Think of it as a mini-Porcupine Rim under your knobbies but through the most pleasing forest rather than over the exposure of a great canyon.  The red dirt that makes up the bulk of the network is ideal for riding—it sheds moisture fairly well, but doesn’t get too powdery during dry spells.  It always seems to be perfectly tacky.

Unlike Red Hill, it’s easy to see why the Davis Meadow route remains under the radar.  It’s anything but easy to get to. The dirt roads that lead to the main loop can be rough for anyone not in a high clearance vehicle; either that or it’s a long bike slog on those roads to get to said loop.

Once at the trail proper, it’s still something of an adventure as the trail is not altogether well marked–some route finding may be necessary. The low usage means that the singletrack can become overgrown in places, and you may find yourself getting scraped by bushes on both sides as you ride—if you can even ride the narrowest stretches in the first place.  But all this is soooooo worth it for the rider more concerned with a little exploration than having perfect conditions under the knobbies.

And don’t get me wrong, most of the singletrack, which ranges from moist, smooth black dirt in the lowlands to dry, rocky tread on the hills, is quite spectacular.  But the best thing about this route is the feeling of total isolation you get, as if you’re the only one who’s been there for years. Other than the trail itself and the ruins of an old homesteaders cabin mid-route, you’d think you’re the only one to ever traverse these slopes.  Along the way, there are fantastic views across the Arkansas Valley and to Colorado’s 14er-dotted Collegiate Peaks beyond.  The last big descent is on a rock staircase that will test both your suspension and your nerve.

Marquette has vaulted into the upper echelons of Midwest mountain biking destinations on the strength of its excellent South Marquette trail network.  With slightly more mileage and being far more accessible than Copper Harbor, Marquette is a popular stop along the way, or even an end unto itself. But as lengthy and varied as the South Marquette system is, it is but one system. To truly make Marquette a multi-day destination in its own right, it needs more trails. The still primitive Harlow Lake trail system may someday fit the bill.  For now, it remains a little-known gem.

Ungroomed and largely unmarked, the trail system can be tricky to navigate and it’s not a great place to get caught after dark, but for those who poke around, one of the nation’s most unique experiences await. Those who can find their way to the mountain top will find amazing open rock riding amongst the beautiful pines, as well as unobstructed views of the deep, deep blue and most massive Lake Superior.

Considering how close #2 is top *massive* population centers, it’s amazing how few people ride there. I attribute that to the fact that it’s essentially a “maze” of trails with non-existent signage. I don’t agree with the concept but the locals/regulars up there prefer it that way. That’s great when you want to keep the trails to yourselves but not so much if you want riders to come explore, stay a few nights and spend some money in the community. Different strokes for different folks…

What about an article on the Top 5 or 10 trails in each state… I would really love to see one like that. But you may not be able to do that as you don’t have an editor or contact in every state. Although you could obviously start a forum topic and get a list. I was think of a mix of known and lesser known trails. I am just trying to find good trails less than 3 hours away…

How ’bout clicking on “mtb trails” (top of page) the best mtb trails state by state are posted with a description, rating, location and comments etc.

Ironhead700 has a great point, but I also suggest you check out this article for a state-by-state top trail guide:
https://www.singletracks.com/blog/mtb-trails/most-popular-mountain-bike-trails-in-the-us-and-canada-state-by-state-2016/

Best unknown trails for me at the four trails in Red Canyon just west of Bryce National park and 12 miles from Panguitch, UT. Red Canyon campground is a great staging area, but if it is full, you can camp near Casto Canyon trailhead or Losee Canyon trailheads. Sure Thunder Mountain is epic, but The Cassidy Trail is superb too. Lots to explore here and the scenery is to die for.