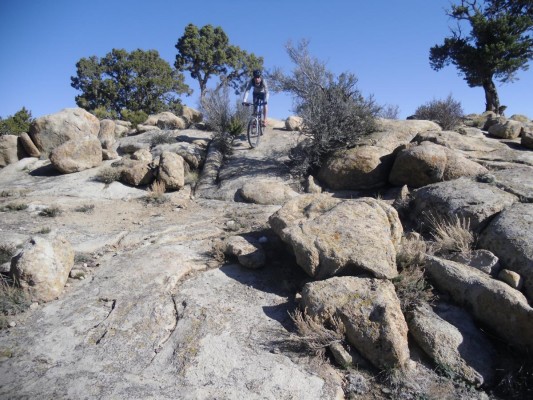 After two glorious days riding the San Rafael Swell, we headed further southwest into Zion country.  While the riding was excellent on the swell, it was rather lonely, and we were actually looking forward to a few more people and a city with a few amenities.  I knew there was tons of great riding around Cedar City, but I also knew most of it was higher in elevation and most certainly snowed in.  However, I had heard great things about the Three Peaks trail system, located right on the edge of town and low enough to be dry, so we made a slight detour on our way to St. George.

Despite high expectations, Three Peaks turned out to be a pleasant surprise, mostly for the variety and uniqueness we found there. Route finding was occasionally problematic, and we spent some time backtracking and trying different forks. Most are well-marked, but a few aren’t and it’s just plain easy to blow by one or two when cruising.

Our first misstep took us into a picnic area with various tables and gazebos scattered about. This was perfectly fine, as most of these minor developments were tucked into gaps between rock outcrops. There were more stunt opportunities crammed into a relatively small space than you’d find at most man-made skills parks. We spent a good half-hour just scaling and hopping off granite boulders before returning to the main singletrack to continue our route.

Being southern Utah, there was no shortage of sand here, but a very North Shore approach had been applied, as there were bridges across the worst of the sandy areas. Unlike the North Shore, most of these were novice-friendly. I’m usually not a big fan of man-made features, but most of these were quite welcome.

The main Three Peaks Loop throws a little bit of everything at you. There are three stiff climbs, a couple swoopy downhills, lots of buff singletrack, plenty of rocky stretches, bridges, and no shortage of loose dirt and rock to help your legs get the idea that this sport takes exertion. While the main loop goes pretty fast, you’ll work for quite a bit.

While the topography and variety of this route are unique, people have added to the singular experience of the Three Peaks loop. There were a number of items left along the trailside, most of which were pretty amusing. Again, I’m not much of a fan of unnatural objects on my natural trails, but most of these added to the experience on this route—after all, this isn’t some remote backcountry wilderness area. There was a grill with some skeletal remains left on it. Yummm. Just after a particularly nasty rock drop through a wash was a sign “relocated” from one of Utah’s highways reading “Watch for Rocks.” Hmmm… thanks for the warning.

Also, there was, of all things, a stationary bike sitting next to the trail miles from the nearest trailhead. Who carried that thing out there? There was even an old tricycle sitting at one trail junction. I’d like to see the guy who rode that through all the gnar to get it there! All this man made falderol didn’t seem to bother the indigenous wildlife, though: we saw a large herd of the biggest, healthiest, strongest mule deer I’ve ever seen. They led us along the route for a good half-mile before peeling off to one side.

The biggest route finding challenge came when we encountered another rock playground like the one at the picnic area, only larger and more complete. Keeping eyes on the trail while navigating the rock obstacles was a challenge, and we needed to dismount and scout a couple times to regain the approved route. This was also quite okay, and was part of the adventure actually. as this rock playground was one of the highlights of the ride. We had a similar problem a little later when we were downhilling and flew by our fork back to the parking lot. After realizing we were lost, what did we do? Well, we played on the rocks there, of course, before backtracking to the intended route.

Despite the hardships presented by the often loose, steep tread and some of the route finding difficulties, the wonderful variety in this trail and the accessibility from I-15 make this a must-stop for those with the opportunity to do so. It’s also uncrowded: despite being a perfect-weather Sunday, we only saw two other riders and one hiker over the entire journey. One was a woman coming back to the trailhead on the original, all steel, fully rigid Ibis Mojo. Big Kudos to her!

After fueling up both the van and our bodies, we continued to St. George, where we had the good fortune to be joined by mntbikedude, our good friend and ridding buddy from Ogden. For the next three days, we’d have another singletrack junkie to share our experiences with. For the three of us, our first stop in the St. George area would be the Prospector Trail/Church Rocks Loop. The Church Loops area is nothing new: in fact, it appeared in the Mountain Biking Utah Falcon Guide last century. Despite the raves in the guide, and from other sources, this has never quite caught on as a marquee ride, so we weren’t sure what to expect.

Heading out from the Cottonwood Trailhead near the north end of Prospector, we were greeted with fast, swoopy, buff singletrack for about four miles before hitting the Church Rocks Loop… where things turned technical. Which is not to say there was no tech on Prospector, it was just sporadic and never very serious.

Right off the bat, Church Rocks hit us right in the face with a tight switchback leading to huge step ups on a steep incline. We made a few runs at this one before cleaning it and moving on. Along the way, there were countless stunt opportunities, and even some open rock riding. Most of Church Rocks, however, was perfectly intermediate, with gorgeous red slickrock riding on a bench, and eventually up to the top of the ridge before completing the loop and rejoining Prospector for the journey back to the van.

The trip back on Prospector was even better than expected from the ride out. We didn’t seem to climb much on the way out, so we expected to be climbing a bit on the way back, but the trail seemed even more downhill in reverse, and we almost literally flew most of the way with big ol’ bug-eating grins on our faces. Oh, yeah, a little tailwind helped as well.

As best as I can tell, this trail only isn’t a marquee route because it runs parallel to I-15, so you have the constant presence of interstate traffic.  It also doesn’t have the constancy of slickrock that you find on Gooseberry Mesa or the continual, swoopy singletrack of the JEM trail, but that combination of swoopy Prospector and techy Church Rocks worked well for me and, amazingly, the interstate never bothered me.  This ride remains horribly underrated.  Given its accessibility and fun-bang-for-work-buck, I’m surprised every visitor to St. George doesn’t hit it.

We returned to the hotel in St. George full of joy after two great rides full of variety and fun, both new to us and both cranking up the smile factor. For the next day, we would hit the only repeat trail on our trip, a rarity that I longed to repeat this trail rather than try yet another new trail.

Next up: Go Tell it on Little Creek Mountain and trying not to get broken on the Broken Mesa Rim.

Nice report. Leah and I visited St. George several years ago and our local guides took us to Gooseberry Mesa on Day 1 and Church Rocks on Day 2. Not saying Church Rocks is the second best ride in the area (we didn’t have time for Little Creek on Day 2) but as you said, it should definitely be on the radar due to convenience and fun factor.