The Hangover Trail is the most intense trail of jaw-dropping ingenuity in all of Sedona… and one of the most creatively-built trails I’ve ever ridden. And it–along with all of the other very best mountain bike-legal trails in Sedona–began life as a hush-hush pirate trail. 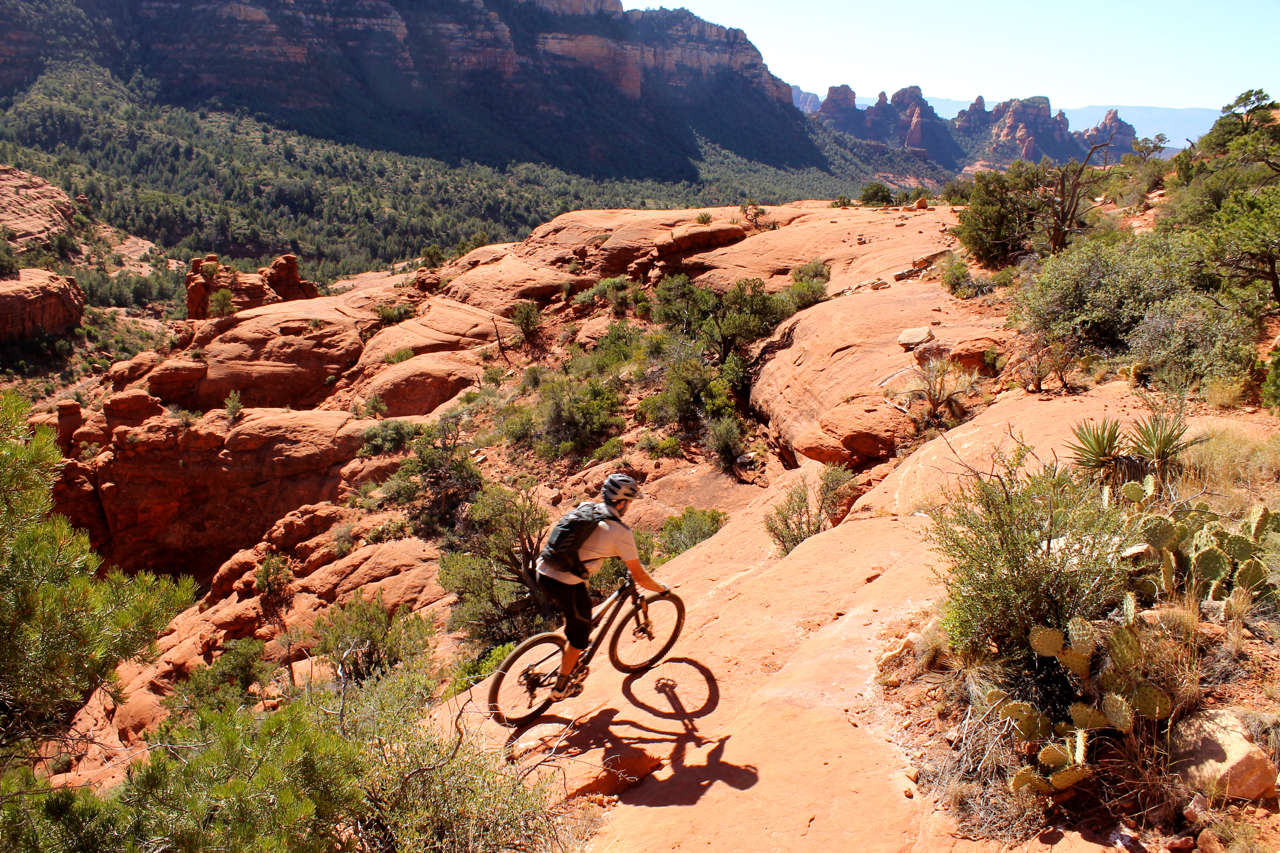 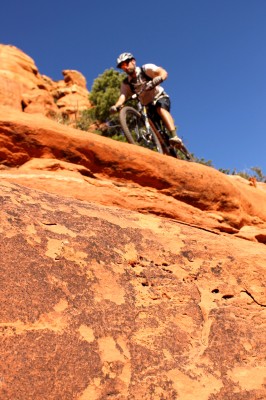 Our ride on the final day of my Sedona trip was essentially the only real shuttle run in the area. However, making this shuttle happen isn’t easy: it requires over an hour of laborious driving up a ledgy 4×4 road, complete with car-devouring potholes. Thankfully, we got a ride up in a big Hermosa Tours van, complete with lift kit and oversized offroading tires, because my pickup truck probably would not have made it.

Unfortunately, Hermosa Tours isn’t licensed to shuttle up to the top of this route on a regular basis (despite the fact that they can guide it), so if you were to make this shuttle happen on your own, it’d require two legit 4×4 vehicles and many hours of slow driving. By that point, it’d almost be easier to pedal your way up the road.

Thankfully we weren’t on the clock, as our van full of riders was a group of Sedona locals and friends in town for a wedding, with the ride doubling as a bachelor party of sorts. Matt and I began our ride with the wedding party, but eventually slowed down to focus on taking photos. But I’ll tell you what, these guys know how to party: mountain bikes, beer, and herb before 10am? They were not messing around!

We began our ride by pedaling up a faint two track dirt road to access the top of the Schnebly Hill Trail. Our route consisted of Schnebly Hill > Munds Wagon Trail > Cow Pies > Hangover > Huckaby.

Schnebly Hill was essentially the upper section of Munds Wagon Trail, which was originally quite literally a wagon trail over the mountains to Flagstaff. This old over mountain passage has since narrowed into singletrack, offering up a high-speed downhill bomb over loose rocks and scree. Despite the screaming high-speed descent, we had to take a minute to pause and soak in the views–they’re unbelievably beautiful! 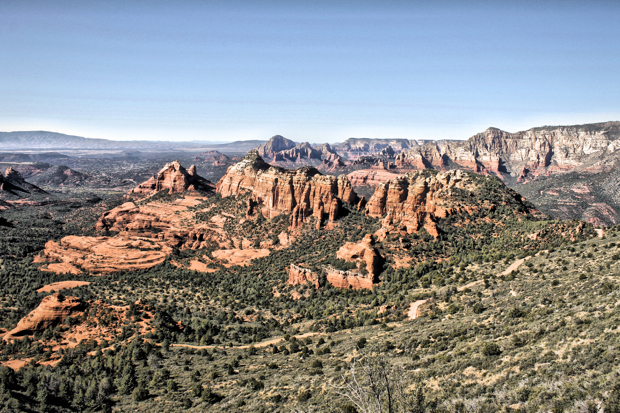 After some rad-donkulous downhill ripping–the longest downhill I’d gotten to experience in Sedona–we reached Cow Pies, which was essentially the slickrock climb up to Hangover. When we finally reached Hangover,the main course of today’s mountain bike meal, we were greeted with another most excellent trail sign:

Hangover began with a traverse along another red rock bench, but it took the exposure and the tech to the Nth degree. Sheer dropoffs to the side promised serious injury–or worse–if our wheels wander too far over, but unlike other exposed areas we’d already ridden, the mere traverse along these precipices was difficult. Some of the slabs were outsloped severely, and some of the transitions from slab to slab were rough and awkward, just waiting to grab our wheels, push them out, and let us slide to our graves. While I rode most of this section, I’ll confess that I walked an obstacle or two. 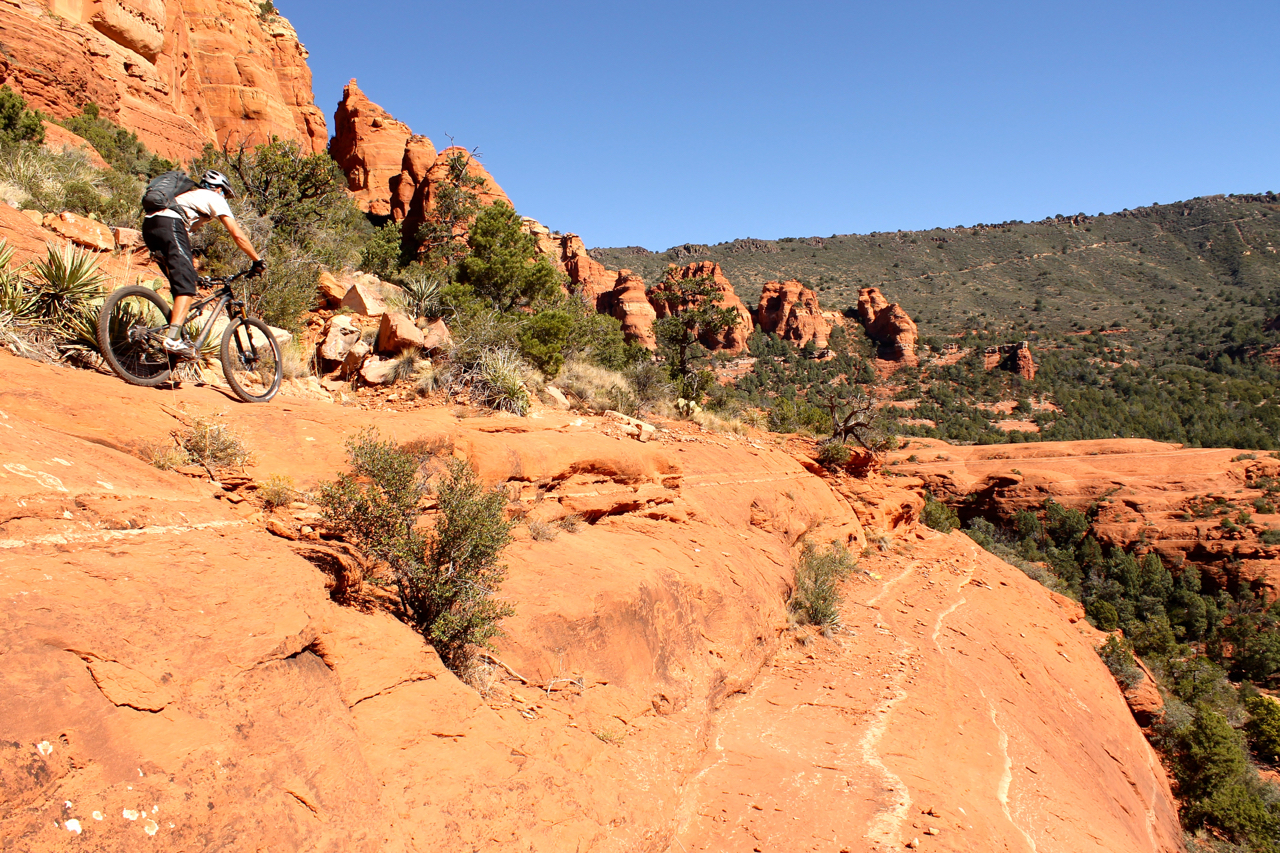 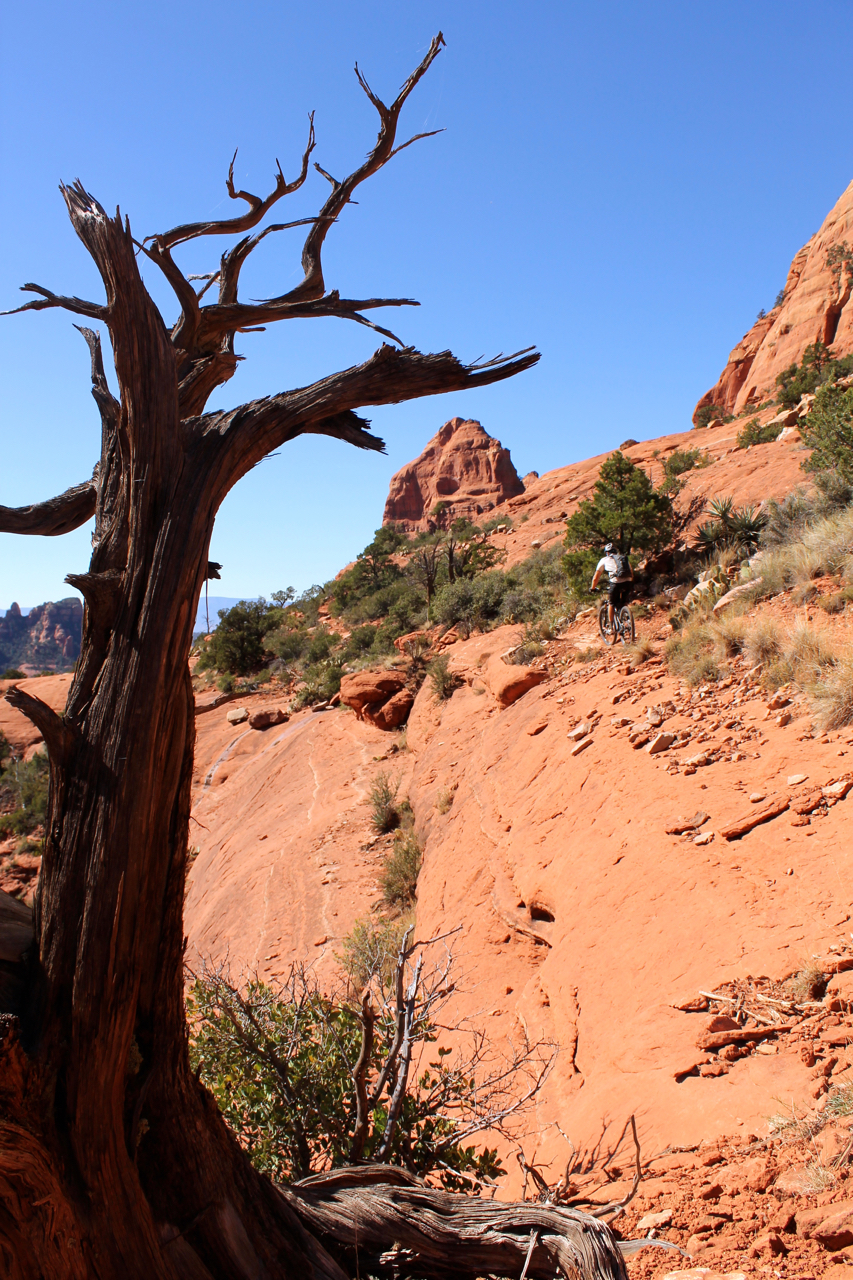 This first portion of Hangover spends a lot of time traversing, but it also climbs up to a red rock saddle between a pair of towering rock formations. The easy place to sit, combined with even more crazy Sedona views, make this the perfect spot to take five and drink a beer. 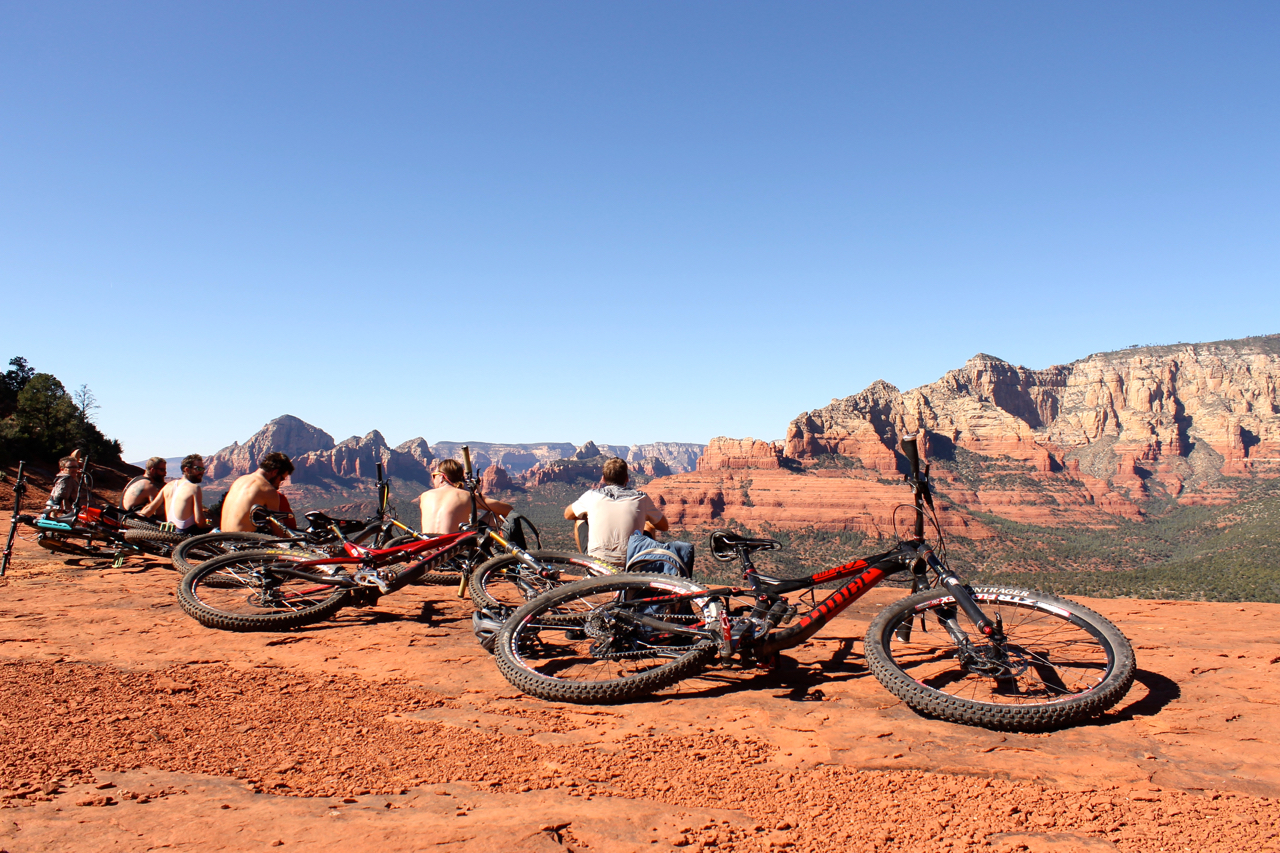 From here, we dropped steeply down some sketchy, slabby slickrock, joining up with the singletrack on the back side. The lines and route choice had already been phenomenal and challenging, but the dirt singletrack we rode around the back side of the mountain was absolutely incredible! Situated just below a rock overhang, there seemed to be barely enough dirt to place a trail there: the mountain side fell away almost vertically below the trail tread. Indeed, in places the singletrack consisted of a few chunks of rock propped between a scraggly tree and the side of the cliff face! Whoever looked at this and thought, “I can build a trail there,” was an absolute singletrack mastermind!

Eventually the dirt section spat us back out onto a rock face, and one of the most sketchy sections of “trail” I’ve ever ridden! For about a hundred yards the trail consisted of a cascade of steep rock rolls and ledge drops, located on the side of this rounded, low angle rock cliff. While individually each of the features didn’t look crazy technical–I did ride one or two–the combination of features and the glaring exposure promised that if you wadded it up and crashed up top, you would rag doll down the rock face for hundreds of feet, stopping on at the bottom of the cliff in a broken, bloody heap. While I do want to go back and practice on that section, for my first time there the consequences of a mistake were just too high. After riding only a couple of the features I decided to walk my bike down the rest of the section. But now I have a challenge to overcome the next time I return to Sedona!

While this was the crux portion of the Hangover trail, the gnar and red rock descending continued on down the mountain, with entertaining yet more attainable features down below. The creative trail design and routing continued, too. I’m still in awe of the builders of this trail. The terrain they sighted it in is so intimidating that I’m sure many people would rope up and place protection if they attempted to ascend straight up the slickrock balds and faces that we traversed on two wheels. From the outside it’d be hard to imagine a more inhospitable area to place a trail for bicycles, but with the creative design and line choices that these builders made, you eventually realize that while it’s exceedingly challenging in spots, it’s all very attainable. 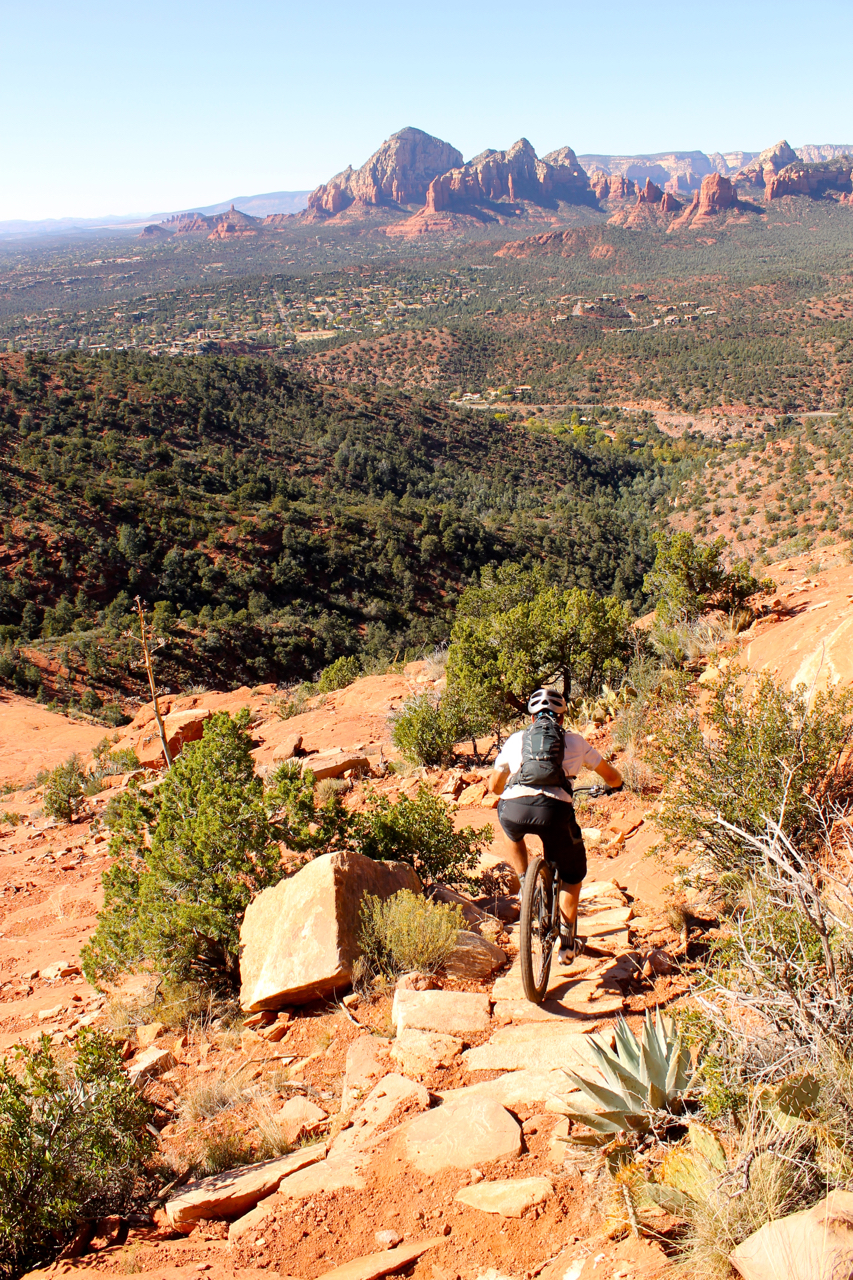 After completing this technical masterpiece, we finished up our ride on the Huckaby trail. After Hangover anything would have seemed mild, but Huckaby still offered up some good technical challenge. This singletrack took us all the way down to Oak Creek and the lush, otherworldy terrain located there.

Our route on this day took us from the top of the tall mountainous mesas surrounding Sedona all the way down to the very bottom of the region at Oak Creek. We’d covered a ton of epic terrain, including one of the most challenging, death-defying trails I’d ever ridden. This ride was the perfect way to finish the week… that, and a few beers to wash the red dust from our throats! 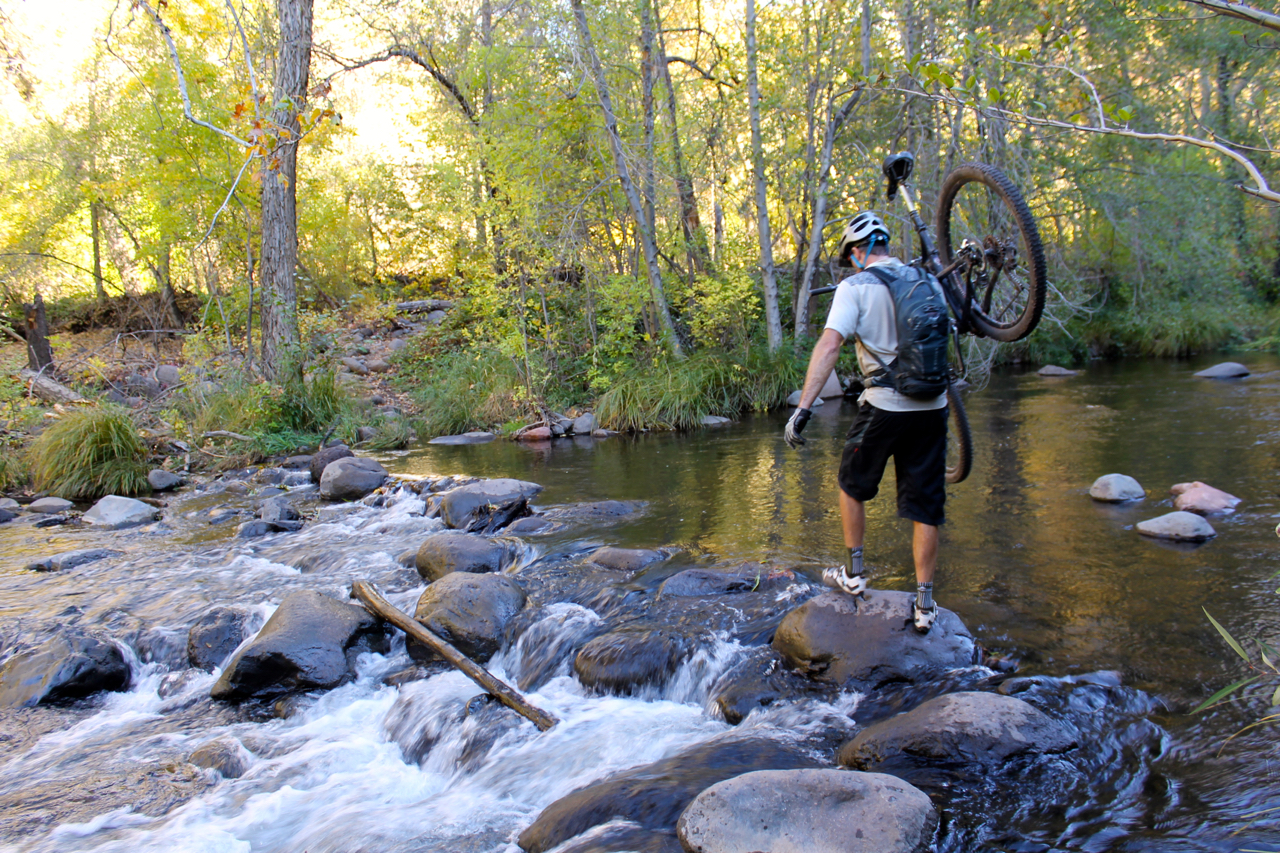 This masterpiece of a trail began life as a rogue slickrock/singletrack route that was built without permission. In fact, almost all of the trails that I’ve written about this week began life that very same way. Back in the 90s, legendary renegade builders who had been chased out of destinations such as Moab and Saint George found themselves in Sedona. With so few bike-legal trail options, they began to build–and build and build.

Fast forward a decade or so, and the national forest service is conducting a survey of the trails in Sedona. They realized that the massive amount of traffic–both foot traffic and bike traffic–on the currently-legal trail options in Sedona was overwhelming the trail system. However, there just so happened to be a massive network of illicit singletrack trails built by the rogue mountain bikers. And it just so happened that these illicit trails were, with a few key adjustments, built better and more sustainably than the old school forest service trails.

Instead of starting from scratch and building new trail networks, the forest service has chosen to legalize almost all of the renegade mountain bike trails. Sure, a few of them have been shut down due to sustainability concerns, but the vast majority have been adopted into the official trail system. 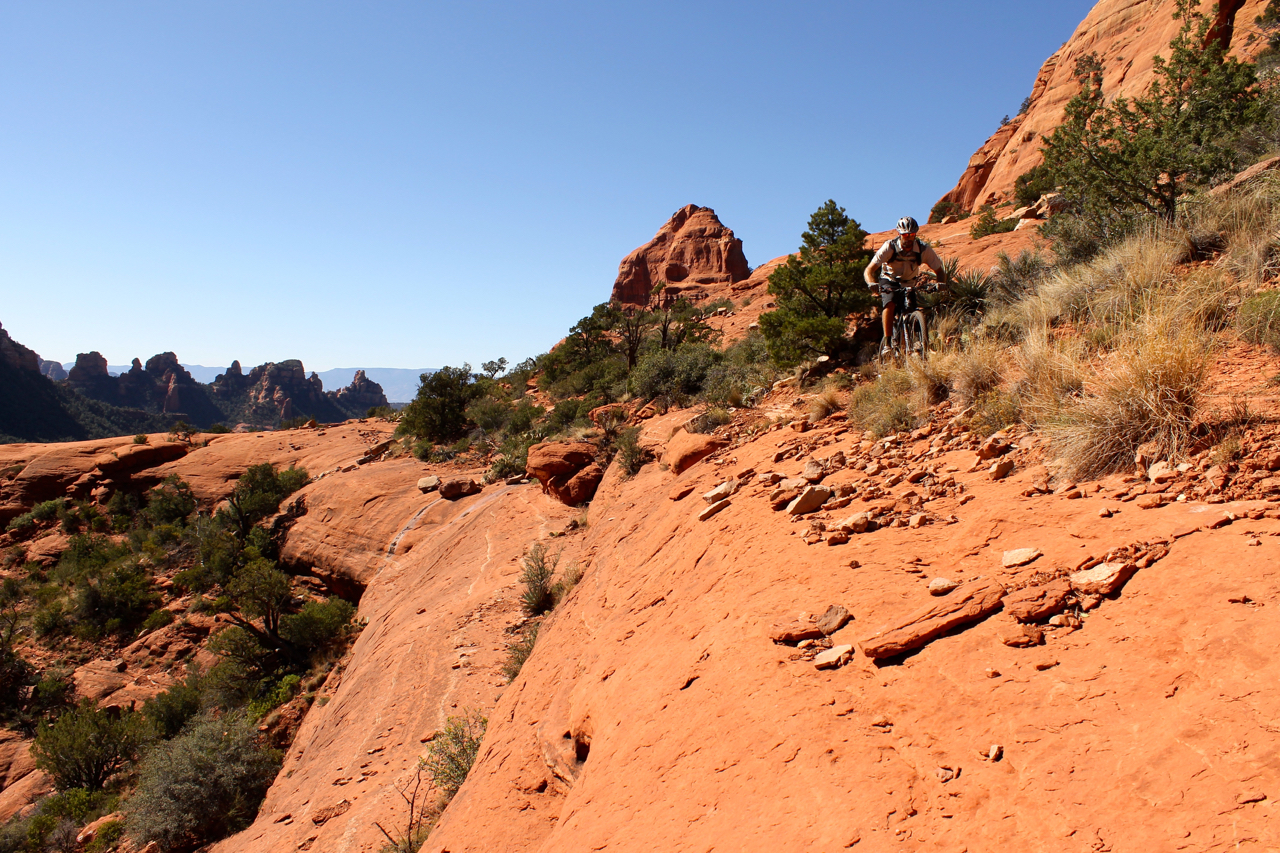 During my time in Sedona Matt only guided me down official trails to keep this coverage on the up-and-up as much as possible, but every day as we rode along he’d point out a beaten down piece of dirt winding its way off into the desert and say something to the effect of, “that will be one of the raddest trails in this area in a year or two once it’s legalized. In fact, we’re already working on getting this up and running and adopted into the trail system.” That same general story was repeated over and over again, and by the time I reached the end of my week of riding, I was blown away not only by the wealth of singletrack in the current trail system, but the impressive amount of unmapped trails that will soon become legit.

Much of this ongoing legalization and advocacy effort has been happening thanks to the tireless work of the Verde Valley Cyclist Coalition–which happens to be an IMBA-affiliated chapter. These advocates work tirelessly to continue to expand the mountain bike trail access in Sedona, and have done so thus far to great success.

Sedona’s mountain biking success story definitely doesn’t follow the standard IMBA model for trail development. Most often I hear IMBA talk about new trail systems being legitimately built from the ground up. But time and time again I’ve also heard different versions of Sedona’s success story filter in from all corners of the globe: previously illegal trails, sited on a wide variety of public lands, being barely rerouted and then adopted into the official trail system–and then those trails becoming instant classics due to the creative-yet-sustainable trail construction.

Regardless of the path that these trails took to get on the map, one thing is certain: Hangover is a masterpiece of a trail in regards to technical challenge, creative trail construction, and world-class views. If there’s one trail you need to ride in Sedona, this is it.

Note: the building of trails on public land in the United States without permission is a punishable criminal offense. Singletracks.com does not support the continued unauthorized building of illegal trails, but rather the legalization of currently-existing social routes. 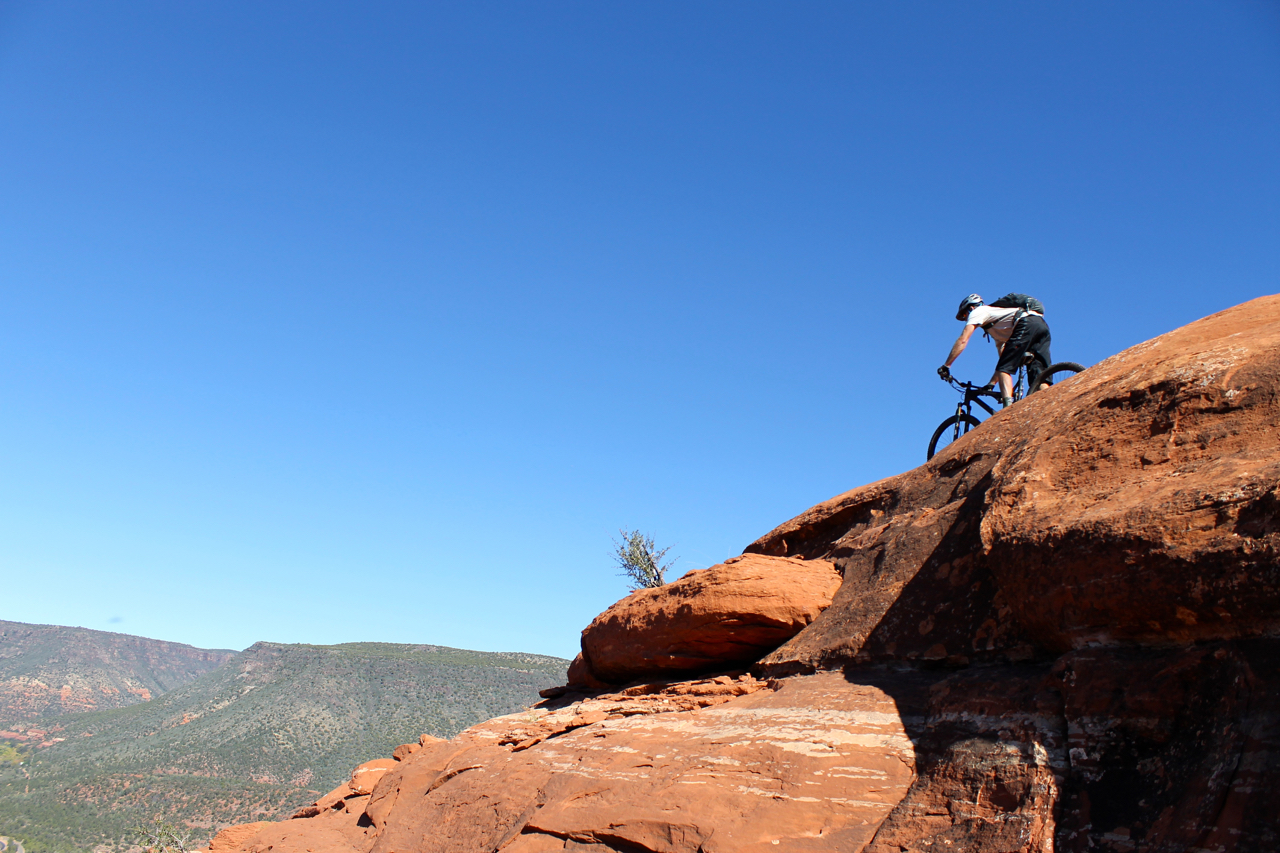 Culture
Pride Rides Vermont Fosters Inclusivity on the Trail
Gear
The Archer D1x Trail Can Add Electronic Shifting to Any...
Advocacy
Pump Tracks for Everyone! The Gateway Drug to Mountain Biking
Gear
This New Norco Torrent Build is Loaded with Parts to...