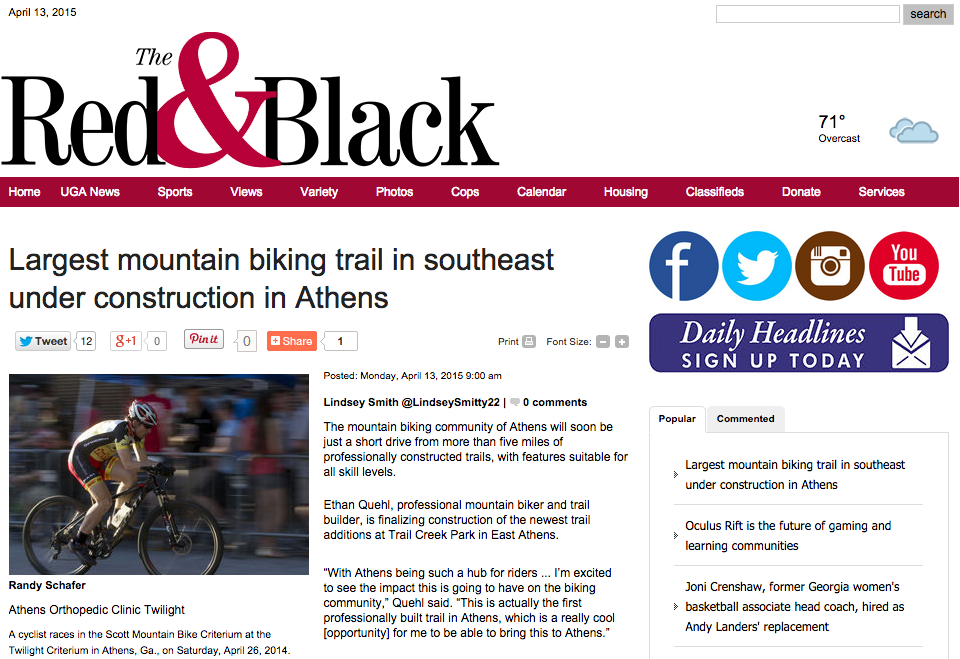 Let me be the first to say that I made a lot of mistakes as a student. For instance, I attempted to grow a beard before any hair would grow on my face. It only came in on my neck. Yes, it was the classic “neckbeard,” and I’m ashamed of it to this day.

That terrible memory — and the fact that my grown face now hides itself willingly under a mat of hair — gives me hope for the University of Georgia’s Red & Black newspaper and their reporter Lindsey Smith, who revealed this morning that Athens is developing “The Largest Mountain Biking Trail in the Southeast.”

There have been 1.7 miles of existing trails at Trail Creek Park with features catering to beginner and intermediate bikers. The additional trails Quehl is constructing currently alongside Southern Offroad Biking Association, or SORBA, will more than double the length of the existing trails and add more challenging features.

As much as I’m excited for the city of Athens, and as much as I know how great Mr. Quehl’s work can be, I think that to call four miles of trail the largest in the Southeast might be going just a tick far.

Oh! I’ve got it. Maybe they’re extra wide trails. Perhaps, in the absence of the territory necessary to make truly long trails, the system will be experimenting with extra girthy ones. We talk a lot about double- and singletrack, but rarely do we hear about triple- or quadrupletrack. They could be pioneering that technology. 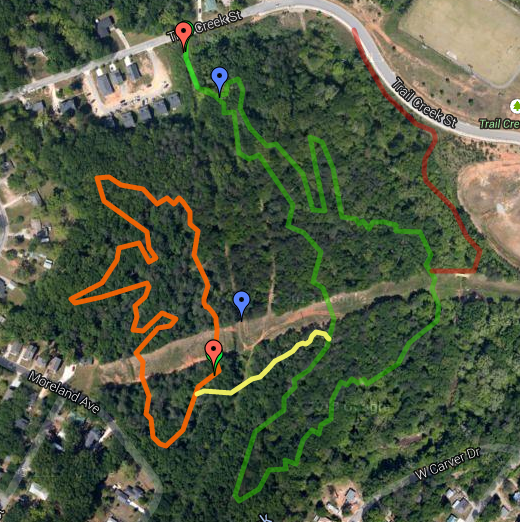 It can’t be length. The Blanket’s Creek system just outside Atlanta has around 15 miles of trail and a downhill run by Mr. Quehl. Coldwater’s got 25 miles of trail with a whopping 75 in the planning stages. FATS has 37 miles and is the greatest mountain biking trail system ever designed (anyone who says differently is not only a fraud but a scoundrel besides).

Or perhaps Ms. Smith meant that the trails will be the “largest” in terms of their fan base, at which we can only speculate. Even so, it’s going a bit out on a limb. Coldwater has over 1,300 Facebook likes. Blanket’s over 1,400. FATS only has 611… but they’re a plucky 611, damn it.

We’ll know more in a few short weeks. I’ll be covering the Athens Twilight MTB crit. The qualifying TT for that race takes place at the self-same East Athens park, Trail Creek. I’ll take plenty of photos. Perhaps the quadrupletrack will be revealed!

Gear
The Marin El Roy Hardtail is Very Slack, But it's...
Trails
Gunnison Gravel Glamping--Riding the Little Known Backroads of Crested Butte
Gear
Our Most Popular MTB Product Reviews of the Year
Gear
These Bikes are Lightweight, Affordable, and Made for HS Mountain...
Subscribe
Login
Please login to comment
5 Comments
Most Voted
Newest Oldest
Inline Feedbacks
View all comments

I like myself a good Quadrupel beer so I imagine Quad singletrack is equally delicious.

The man has a point

Now that you’ve put all this in beer terms, I am much more on board.

But in all seriousness, even if this park sub-categorizes itself as a jump/flow trail (as the article seems to indicate), many of the trails at Coldwater Mountain qualify as such and, individually, hold more length than this entire park is expected to contain.

And if you even begin to point out that the article says “downhill trail,” imagine the massive cosmic hand of truth slapping you across the mouth. This is Athens: I lived and rode extensively in Athens for over a year. There is no topography located closer to Athens than Cornelia, GA that could even begin to be the site of a legitimate downhill trail.

I just got back from riding EACP, and I have to say, the work they have done here is outstanding. No these may not be downhill trails in the redbull rampage sense, but what they are is very accessible and very fun. There’s a downhill run with more kickers than you can count, and they are working on a new section with more kickers, rock gardens, drops, and twisty singletrack style trails. They need to work in a stream crossing somehow, though I’m not sure there is a stream on site, just the river. Yes I walked the under construction portion of the trail and saw it for myself. I’m personally more excited for that to open than the jump line. It’s turning out to be a nice little playground in the middle of town. I doubt they’ll be able to fit more than about 8 miles of trails on this tract of land, and to accomplish that they would have to snake all over themselves, but they are making the absolute best of what they have. Don’t let the poor article from the Red&Black put you off, it’s a student newspaper that is locally known for horrible journalism standards. The folks at SORBA are building us a nice little trail system right in town, a place where we can ride our bikes on purpose built trails, using donated and tax dollars, with zero user conflict. I can’t give them any flak regardless of the poor reporting.